Does anybody know the value of the resistance of the original MB and GPW Fuel Tank sending Unit?

In short, what was the maximum resistance (in ohms) for the original MB and GPW fuel tank sending unit?

Thanks for the reply.

I have been testing several gauges that I have and they seem to be all over the place on readings. I assumed a 100 ohm resistance for empty and 0 resistance for full. But all of them do not read the same with these resistance values. Anything over 100 ohms results in the gauge reading the same as 100 ohms. I found that a 1.1 ohm resistor does result in a reading of full. I noted that the gauge readings are not linear in that at say one half full the resistance is around
25 to 27 ohms which of course is not one half of 100 ohms or 130 ohms. That seems odd to me.

I had saved an old article on fuel gauges from several years ago where it was stated that the sender unit was 50 ohms. I think that is in error based on my measurements. None of my gauges would work even close using a 50 ohm sender.

Anyway thanks for the reply.

The readings I stated were for the sending unit.
If you think about it, if powered up and you ground the sending unit wire the gauge reads full. Thus 0 ohms
gives a full reading.

Wolfman wrote: ↑
Wed Feb 18, 2015 12:52 pm
Better late than never, Joe.
I had an original GPW ( not MB ) fuel tank sending unit in the shop but some disassembly and repair was required to get it working.
Persistence prevailed !
The range from empty to full is 17 ohms to 3 ohms.
I thought 130 seemed like a lot. The wire wrapped around the bakelite strip is pretty fine, but not that fine.
You have to figure the wire on the strip would have to be heavy enough gauge to stand up to all the rubbing back and forth from the contact strip attached to the float arm.
I am not sure who made it ???

Sorry my fuel tank had no sender prior to the restoration

My comment on this : "I noted that the gauge readings are not linear in that at say one half full the resistance is around"....

Remember that the fuel tank has a irregular shape . Two botton levels. This means that the gauge electrical resistence should compensate the position of the floating to assure a correct reading.

That makes sense. I had not thought about that. I had just kind of assumed that the design was for a linear change in resistance.

Anyway, thanks to every one for your replies

Interesting find, Yves. I remember that one, but forgot about it !
Been through more gauges since then. A lot of the original fuel gauges have survived, but the sending units have not. This is where the problem lies. Over the years, resistance range values, of the sending units have changed. You must find a sending unit that operates in the range the gauge is calibrated to. If there is a mismatch. You get a bad reading. And this problem is not just isolated to OEM gauges. Mix and match any gauge and sending unit can cause grief.
Thought on gauges. They are cute and when working, give an indicator your fuel level.
As far as exactly how much fuel you have. It is a learning process. Once you get use to what "your" gauge reads in comparison to how much fuel that correlates to in the tank, is reassuring.
Fuel gauge drop rate is going to speed up once the fuel level drops below the upper level. Keep this in mind. Nothing about the sending unit that automatically adjusts for the change in volume.
Being a pilot, I look into the tank. Measure the fuel and have a pretty good idea of the quantity. I know what the fuel burn rate is for the aircraft I am flying. I make note of the engine run time and when the "clock" says I am about out of fuel, I find a gas pump. Don't care what the gauge says ! But, the gauge is a back up. If it says empty before it should, that will get my attention !
Mike Wolford
CJ-2A
VEP GPW
Comm./Inst. SEL
AOPA ( 46 yrs)
EAA ( 46 yrs)
4th Inf. Div. - 5th Inf. Div. - 2nd Armor Div. - CIB
Top

That's my next project. My gas gauge never shows full but 3/4 when tank is filled up. It worked ok with the sensor out of the tank, but not when installed. I never worry about running out of fuel because I watch the odometer and have the spare tank hanging back there.

When I fuel up, I always take the spare tank, fill up the main tank, and then refuel the spare. That will ensure both tanks have fresh fuel constantly.

I had fun installing the sensor on my mid 90's MD Juan tank. The holes were are not drilled correct & didn't match the sensor

I agree with the above answer. I just tested uninstalled a NOS fuel sending unit made by Stewart-Warner and used in the International 5 ton 4X2 C.O.E. Tractor Truck H-542. It registered 1.7 ohms at full and 124.0 ohms (+-3) at empty. These values agree with the above answers within the range of accuracy of my inexpensive multimeter. I believe the GPW used SW fuel gauges, and SW sending units had to be compatible with the fuel gauges in both the MB (Autolite) and GPW (SW + ??), so I think the 0-130 ohm range was a common range among many sending units used in WW II military vehicles.

The new reproduction CJ-2A fuel sending unit I tested is made in Europe and is sold by a few parts dealers on the east coast. Ron was out of sending units when I ordered mine elsewhere, and he sells them only in combination with his compatible reproduction fuel gauge. I wanted to use my original Autolite fuel gauges rather than reproduction gauges, so sought just a sending unit that would work with the Autolites. 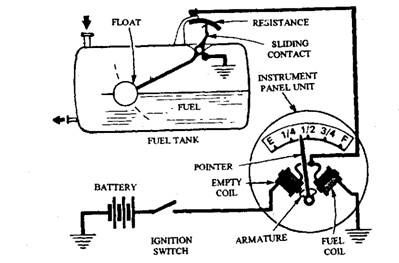 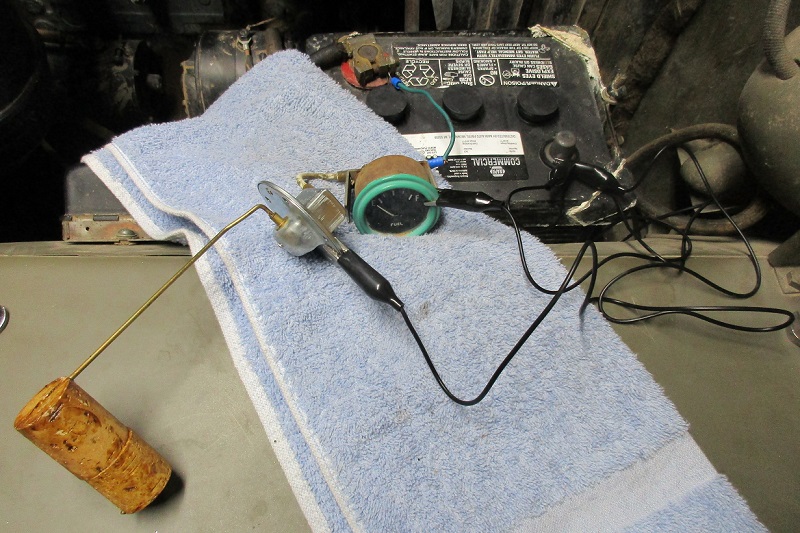 I hope this information proves useful to others.