North Bay Military Vehicle Club, to perserve and honor those for our military men & women. Exibit for historical purpose for those to admire and appreciate.

In July a handful of MVers in several WWII jeeps and a couple CJs motored from a rendezvous in Forestville to the Willys America Open House and display at sleepy little Cazadero in the Russian River area. Chuck Lutz and I rode with Dave Aro in his slat grill. It was his longest shake down run in this jeep and it ran quite well until right before arriving back at the staging area when the thermostat stuck, and the temp went up. It became unstuck shortly after with no harm. Prior to leaving Forestville, Ernie Ongaro was investigating the ammeter in his MB that was taken out by a short. He decided to carry on and we drove down to the drive-in to meet Mike De Catur, Pete Coleman, and others. But the hot wiring convinced Ernie to park it. He and wife Deb rode with Matt.

Some of the best MV driving in the state is in western Sonoma County and this almost annual open house and display is a great excuse to do that. Paul Barry's Willys America is a nationally known Willys post war truck restoration shop and parts operation, located at the site of an ex-saw mill and train station. Many truck, Jeepster, and Commando owners typically attend this meet with Paul providing a free BBQ burger lunch for participants. This always includes the MVers who attend. Paul displays his extensive truck collection for the show.

Sleepy little Cazadero is known as "Caz" to the locals. It is six miles north of the Russian River up Austin Creek on Cazadero Highway.
Amazing to see an operation like this way out in the boonies 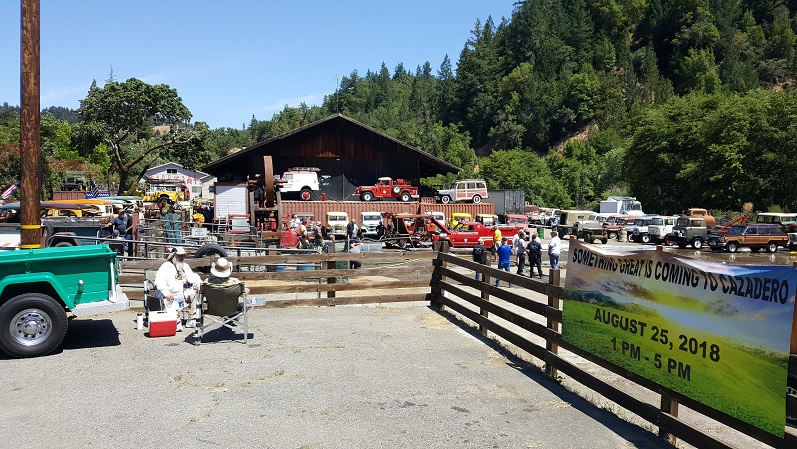 
Jeeps right to left, from Dave Aro, Matt Parry, Gary Horwitz, and Matt Betry who trotted out his CJ for a change 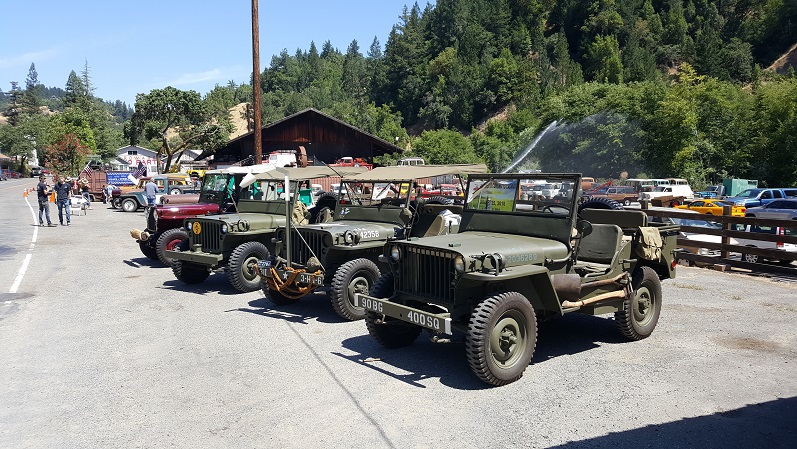 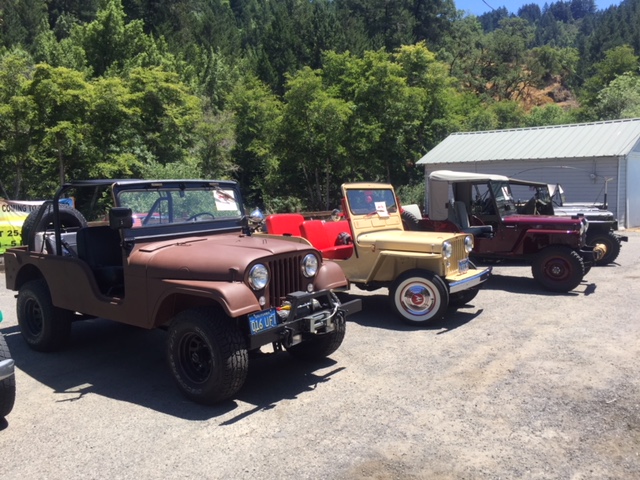 
Fire trucks and volunteer firemen have always been important here in the forest. Just like with vintage MVs, it's fun to play with them. Willys America owner Paul Barry has 8 or 10 old fire trucks including a CJ pumper. 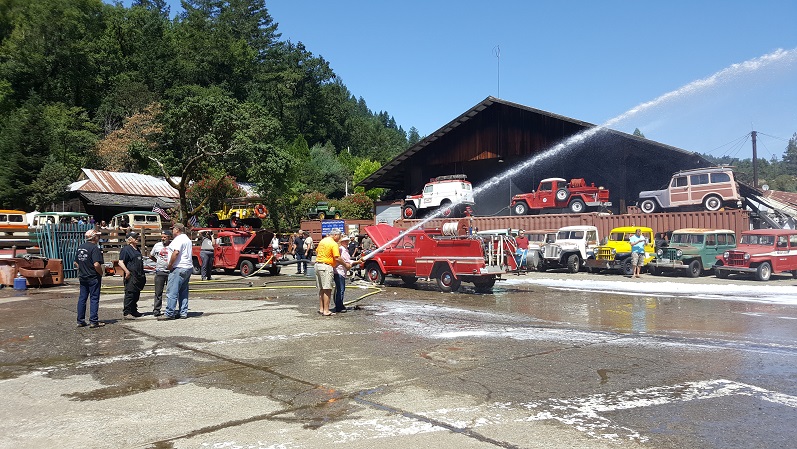 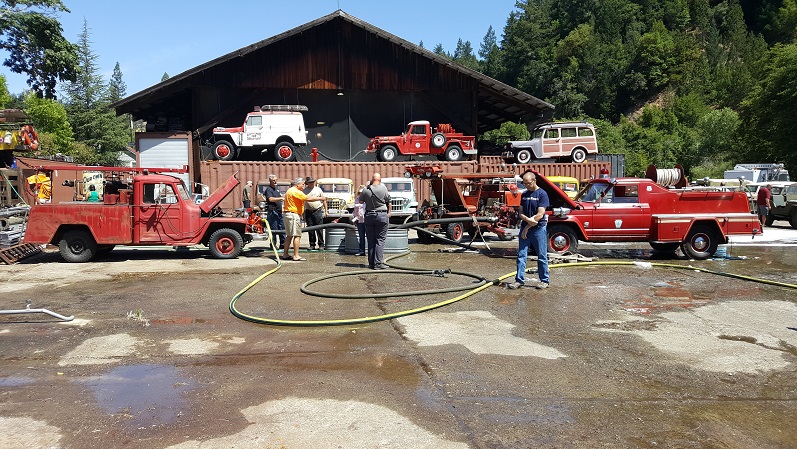 The old and loud fire whistle sits 1,000 feet above town on the dirt Old Cazadero Road and serves as a noon announcement daily

Willys America started in Los Angeles in 1977, moved to Caz in 1980. This is its third location in Caz and it has been on this property since 1991. Open houses started a few years later and are almost annual in July. Check them out at www.willysamerica.com

This Diamond T has been parked at the old saw mill for the decades I have been coming up here with family. Paul reported it was sold to a guy in the local MV community right after this event 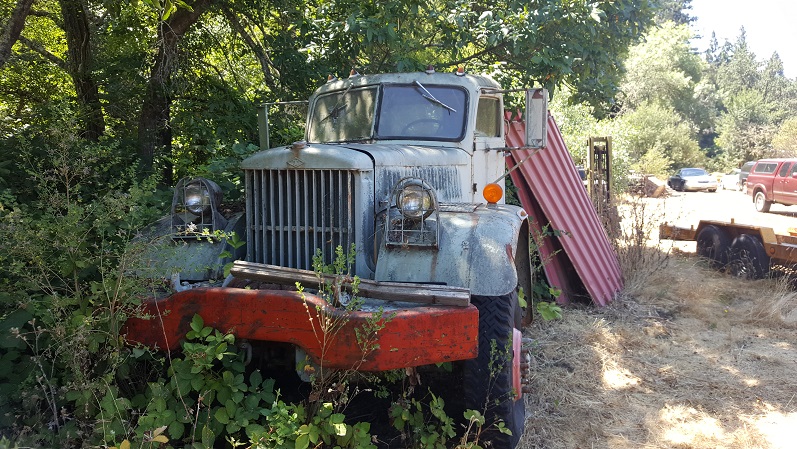 
Here is a very rare ex-USMC ambulance M-679, derived from a FC-170 Willys. It has the original Cerlist 3 cylinder, two stroke diesel 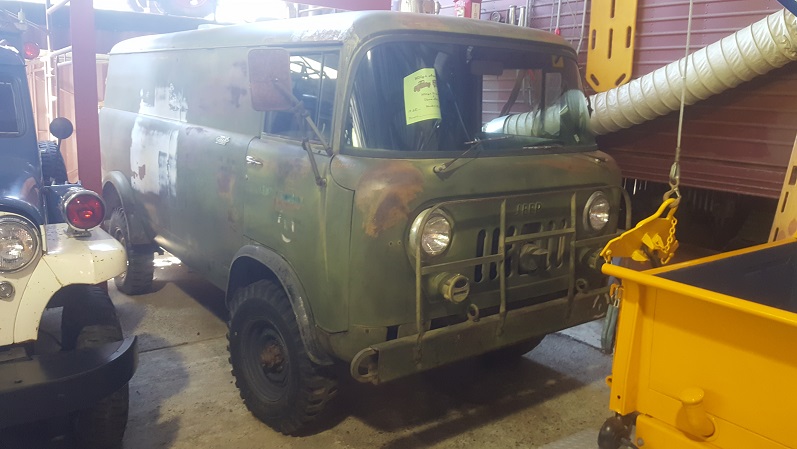 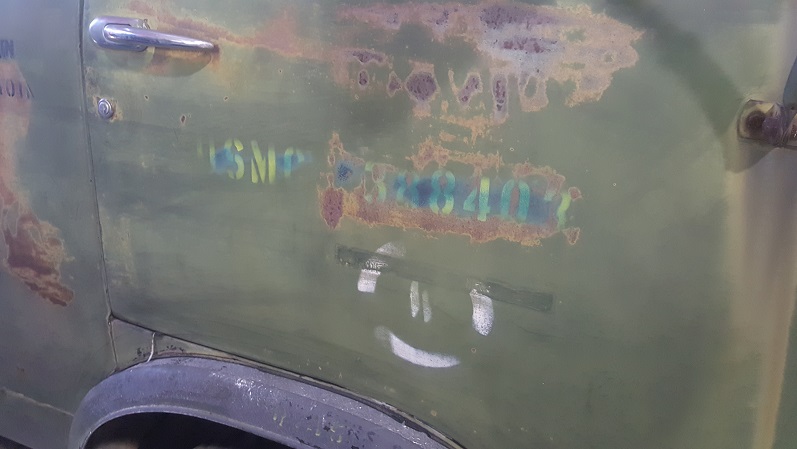 Paul owns a 1943 Allis-Chalmers M7 snow tractor, also on display in this barn

Paul also owns a 1942 1.5 ton Chevy fire truck but it was not on display. It's an ex-military G506 that was purchased by his grandfather in 1948, a retired Oakland fireman living up here who became the Cazadero fire chief. The truck was converted by L. N. Curtis Fire Equipment Co. in Oakland. Paul restored it in 1998 for the Cazadero Volunteer Fire Department 50th anniversary.


On the way back from Caz we made a detour to visit Keith and Trish Palmer at the retirement home they bought high above Austin Creek. Great spot and unlike many places in this narrow valley, it has SUN! Keith didn’t have his Dodge WCs on display 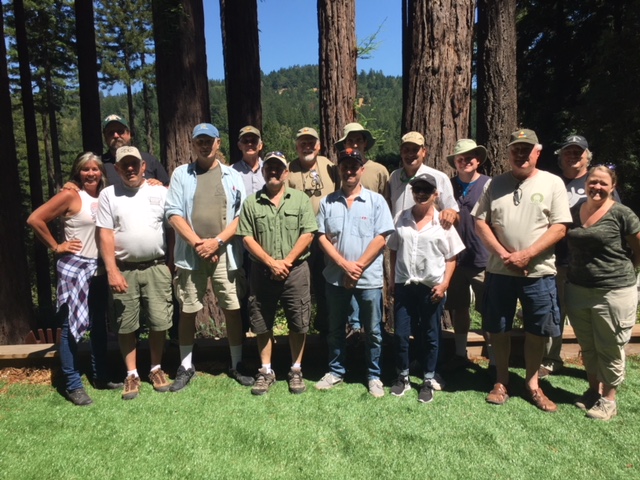 The "debrief" on the Palmer patio. Thanks for your hospitality Keith and Trish!
The boys in the motor pool were speculating that Dave Aro was playing Pokémon GO instead of socializing but this wasn't confirmed. The Pokémon part I mean


Back in Forestville, Matt P. and Ernie dug into Ernie's MB, with Dave A., Chuck, Dave S. and the author "overseeing." Ernie had bought a relay at the hardware store in Caz, and they installed it next to a new ammeter. After consulting the wiring diagram in the manual, it was determined that the switch had been wired wrong since before Ernie owned the jeep. This was corrected. It seemed to work well because I followed Ernie and Dave’s jeeps in my pickup to Sebastopol and no smoke or steam was observed from either jeep! Fun times!

Since this is a NBMVC forum, this is a good opportunity for some western Sonoma County trivia. Cazadero Highway that snakes along Austin Creek is the old rail bed for the North Pacific Coast Railroad that was extended from Duncans Mills on the Russian River in 1866 to Cazadero which was originally a hunting resort. Cazadero is Spanish for "hunting ground." This narrow gauge railroad became North Shore Railroad and then was consolidated with the Northwestern Pacific Railroad in 1906. This was the main form of travel for San Francisco and Marin County residents to reach the western Russian River, the many resorts along Austin Creek, and the terminous at Cazadero. By car, the original way to Caz was on what's now called Old Cazadero Road which went from Guerneville over the mountain and dropped into Caz just beyond town, crossing the creek on a 1940s ex-military “Bailey Bridge” by the way. Half of this road is still dirt and on private land now. Later down by the Russian River, Austin Creek Road was built on the other side of the creek from the railroad. It snakes north servicing many cabins and houses, crosses a bridge and the tracks and winds up at Caz.

My sister-in-law's husband's family, the Juilly's, used to make that train trip every summer, crossing by ferry to Sausalito where the tracks start. The railroad went past Mill Valley and through the small Marin County towns and a tunnel west of Fairfax, then to West Marin and up the coast. They owned a house just south of Caz, and later two small cabins at Elim Grove which is one mile south of Caz. The Juillys would pack large wicker trunks, stay the summer, and return in the passenger rail cars which had seat backs that could be reversed for the trip south. There was an engine turntable in Caz but sometimes it became difficult to turn it, so they would back the engine down on a siding to what was the end of the train, hook it up, and it backed down to Duncans Mills pulling the cars. My brother-in-law George Juilly is the unofficial "town historian" and is a collector of Austin Creek resort and railroad postcards. He has done several displays of these at the Sonoma County Fair. You would be surprised to know how many resorts and hotels were in this narrow canyon.

Speaking of Elim Grove, most people don't know that the Bohemian Club in San Francisco held their annual encampment there from 1887 to 1891. It was called "The Grove" and after many groups owned it, it is now the Cazadero Music Camp. The club held their first campout in 1878 at what is now Samuel P. Taylor State Park in Marin. Next they went to a redwood grove that used to be at Freezeout Creek in Duncans Mills, then held events just east and west of Guerneville. From 1883 to 1886 they were at what is now Camp Meeker near Monte Rio. After the stint on Austin Creek they went to what is now Muir Woods, then moved to an old growth redwood grove along the Russian River owned by a timber company. As the Bohemian Club evolved from the original newspaper men, actors, and musicians to politicians and businessmen with some wealth, they decided to buy the land to save it from lumbering. Members did this and expanded the "Grove." The town of Monte Rio developed next to it. Today their annual July encampment there attracts many of the countries famous and infamous, with Sonoma County Airport boasting their largest annual assembly of private jets. Sonoma Jet Center where Matt works has their biggest two weeks of fuel sales every year during the Bohemian Club event.
Last edited by John Neuenburg on Mon Sep 03, 2018 9:07 am, edited 2 times in total.
Military Vehicle Collectors of California
MVPA 7404
1942 Ford GPW British Special Air Service Regiment Replica
1944 Willys MB
1941 Indian 640
BSA Folding Bicycles
M1942 Command Post Tent
Top

The converted G506 mentioned in the article. It wasn't on display that day 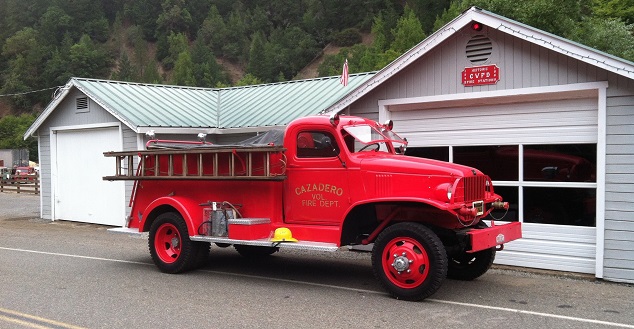 Nice "after action" there John. Don't forget good 'ol Camp Royaneh. Both Chuck Lutz and I attended many a camp there when we were kids. I have the fondest memories of that place and it is one of the oldest camps in the Scouting program. Started in 1925, kids from SF would ride up on those same trains you mention. Here is some history and photos...


Sausalito to Cazadero on 'ol #20 was the way they got there back then. We got there by car.

And by the way, this is where I first was exposed to the Jeep. Jim Wilkins the camp Ranger / Caretaker / Cowboy was either on a horse or in the surplus M38A1 that he had. It was fun to see that Jeep climbing the roads and trails of the camp and I knew then that I had to have one. He would make the dump run with that Jeep and the road was steep and uneven. That Jeep made it look real easy though I know it wasn't. Had to have one when I grew up and now I have too many. hahahaha...Camp Royaneh...great memories.