I think this thing is bigger the 1/4 ton,so I put it here.
I know that WWII US Mess sections worked out of the back of 2 1/2 ton trucks, with the ranges and food preparation areas mounted inside, but did the US Army use Mess Trailers during the war? Does anyone have any pictures of one? I have a line on what is being called a US Army WWII Mess trailer,but not sure I would know it if I saw it, or if it even existed.
Thanks in advance.
Joe Hall
Bremen Enclave
MB I00672
Top

Here's one of a kitchen truck Ben Hur trailer: 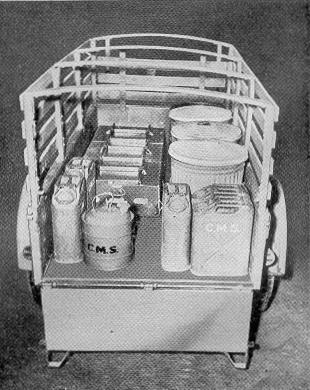 Thanks,have seen similar pictures to that. This one is like a German "Gulosch Kanone", has the burners built into it, large cooking pots set into top, an area that I guess it to bake in.
I really did not think the US Army had trailers like that, but I could be very wrong. Have never seen one in any photos anywhere.
Joe Hall
Bremen Enclave
MB I00672
Top

Like you said, it's doubtful if the US Army had any cooking trailers as the ones you're referring to. The M37 stove was put in the back of the GMC truck and cooking was done there, or with the cookers placed on the ground under a Tent, Large Wall awning.

I'll sniff around and see if I can come up with something.

My friend Harry here in Sweden has three NOS M37 cookers and also most of the pots and pans and all the other stuff needed to set up a full kitchen truck setup. Now he only needs the GMC CCKW 353 w/o winch to go with it

The U.S. then went to the M37 and M59 field ranges that were usually mounted in trucks or used on the ground:

or most recently, in the Mobile Kitchen Trailer (MKT): 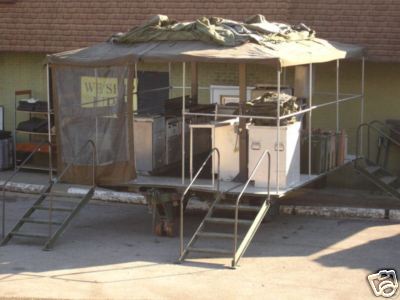 The U.S. Navy, in "lessons learned" after Desert Storm, actually bought Karcher Field Kitchens like this: 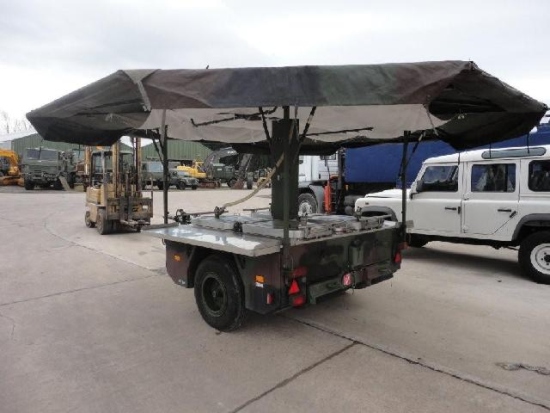 I don't think they were used much, I saw some sold off on Gov't Liquidations a few years ago.

Here's some pictures of WWI-era U.S. Army field kitchens - one is a "gulaschekanone" probably French supplied.

and another one truck mounted: