Here are some more shots of the new hoppers. They were not easy builds but now they're here, I am glad I handled the expense and effort! 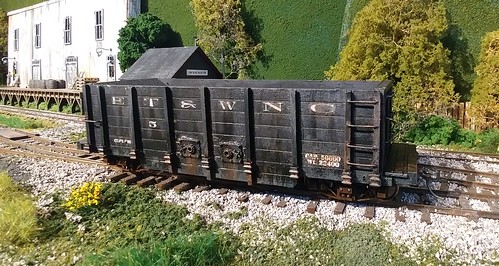 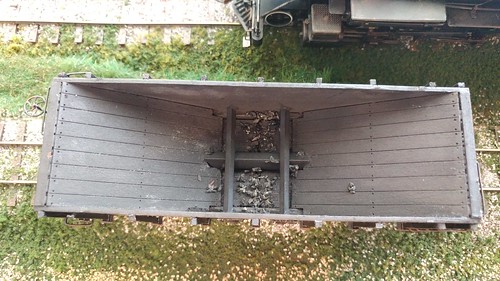 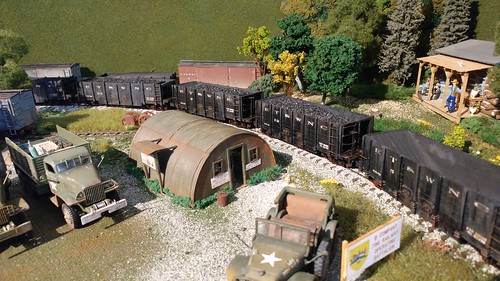 Lee,
I don't see your jeep "Sugar Blues"?
You have done a fantastic job!!!
Pat
Top

I made a lot of progress on my ‘new’ country store/gas station for Sadie, TN on my On30 gauge model railroad. This is replace the Woodland Scenics pre-built model I had as I was building the layout. After I bought that, I decided to eventually replace it someday. Well, as most of the structures I have are scratch built, I decided to build something similar to what I currently have, but not exactly the same structure. I also never liked the way Woodland Scenics finishes their products, they just have a ‘plasticy’ look to them even though they are painted.
Anyway, yesterday I only set out to complete the roof and originally I did almost everything but that. I completed the facing area at the top of the roof, painted the roofing and did some weathering as well as drilling a hole for the pot belly stove chimney.
The interior walls are printed on paper and glued to the inside of the walls, something I made on my computer with graphics of trim, wallpaper and wainscoting. I did the same thing with the floor, using board patterns I found online. Everything on the floor was glued into place with Gorilla white glue. 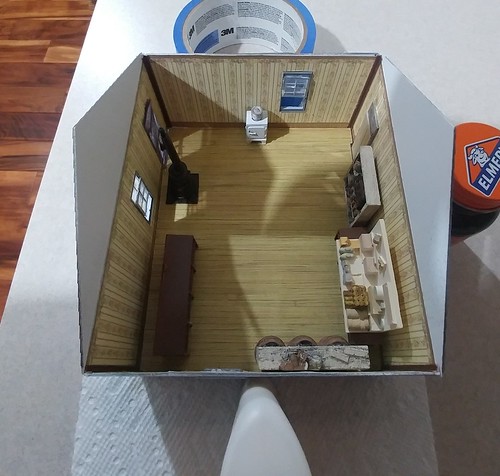 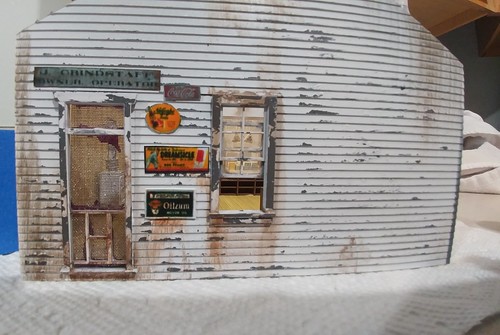 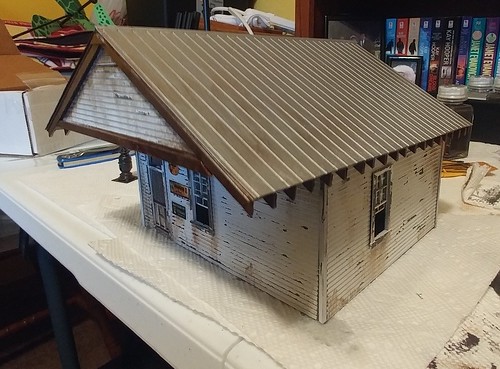 Sometime this week, I’ll weather the roof and build the supports for the front end. I also need to build and paint the gas pump kit I have, as well as putting some figures inside and running the lighting into the structure.

Thanks, Pat!
My MB is currently marked for an ETO vehicle, so it wouldn't fit in stateside.
It's also a 1944 MB and the layout takes place in '43.
Now, I do intend on eventually re-doing my hood markings to look like those on Bill Mauldin's 'issued' Jeep, with blue hood numbers and a non-surround star. But even then, that would mean I'd have to do 1/43 scale hood markings one character at a time. PASS.
1944 Willys MB #366014
MVPA, REMF, former US Army Captain
Top

Lee,
Wonderful as always.If I may suggest a screen door advertising push bar. Maybe a bread company or one of the soda pops.Should be plenty of examples on line.
Hope all is well with you and yours.
Bob
Top

Last night, I made a LOT of progress on the store structure. I finished the roof entirely, got the front supports cut, assembled and glued. The weathering went well, with a technique I figured out myself for a rusty metal roof. I’d figured it out with that shack I’d made a while back, and just did the same on a larger scale. I think it looks pretty good for a rusted metal roof. It’s easy to do, I dabbed Testor’s rust colored paint in splotches almost like a camouflage pattern, then dabbed dark rust weathering powders over top of that. It’s quick, easy, and I think very effective. The straw, I covered in rust powders as well, then slid it down to the correct height after this shot was taken. 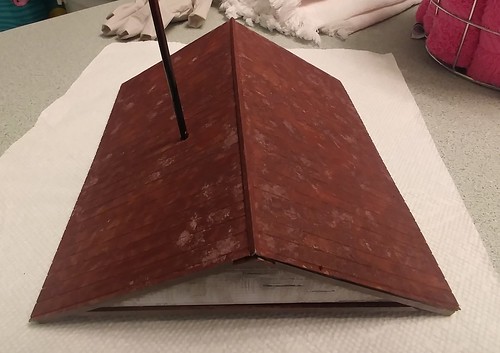 I managed to fit my cell phone inside and take a few shots of the interior. Since this photo, I added some WW2 era posters to the inside, with a ‘don’t share secrets’ one right next to the phone. 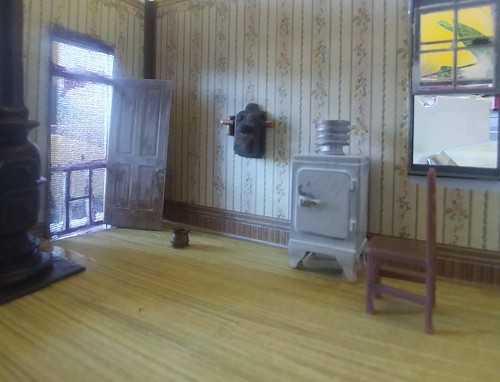 The only things I really need to do now are to paint and weather the front roof supports, put a few figures inside and build and paint the gas pump. Oh, I also need to print out and make a Texaco sign to hang out front. I’d almost forgotten about that! 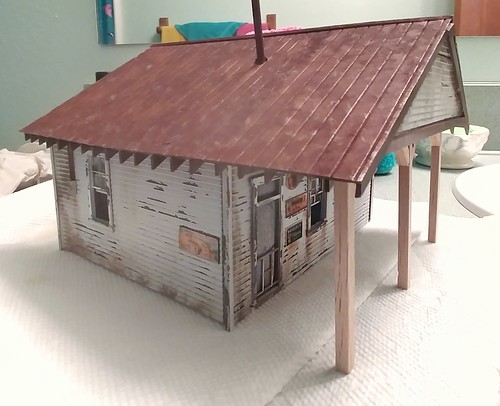 The gas station/store was put into place last night on the layout. First, I had to remove the old structure, then change the ground around it. It was a much larger ‘footprint’ and I decided to change the gravel area around it, as previously I’d used much too coarse gravel. I stripped it down with a caulking knife, smeared white glue all over the area, then scattered small gravel around. It’s a clean surface right now, so eventually I’ll be adding little stuff here and there. Things like oil stains and the like. As the glue was drying, I created a set of ruts in the gravel, and it dried like that, alongside the store. I was happy with that result.
I needed to put down a base for the gas pump and the front roof supports, so I had painted a section of styrene, and scraped equal segments. With the paint already dried, I added small lines of glue along those seams/cracks and put ground foam on that to show grass popping up. Eventually, I’ll add ground foam around the edge. When I added the gravel base, I recessed the ‘concrete’ into that and now that it’s dried, it does not look like it was just sat in place.
I almost held my breath the entire time I drilled a hole through the floor, through which to run the wires for the interior lights. I used a large bit but drilled very slowly. It all worked out well, and I also added figures inside while I was waiting for the scenery glue to dry. The original structure was close to the road, and this one is much further back, leaving a larger area on which I can park wheeled vehicles. 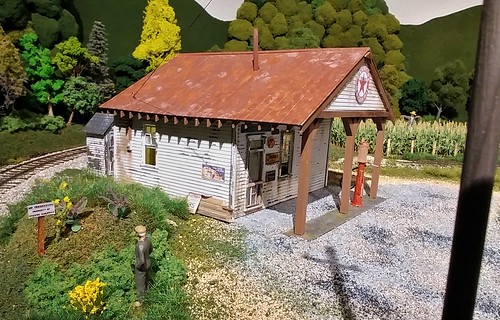 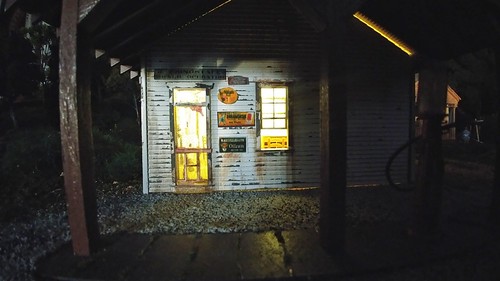 One funny thing I noticed when I looked at the lighting on with the room dark, the roof is partially translucent! Two thick sheets of styrene and a layer of paint and weathering powers wasn’t enough. I guess I’ll have to paint in the inside of the ceiling black, but I don’t do night ops, so there’s no burning hurry for that…
1944 Willys MB #366014
MVPA, REMF, former US Army Captain
Top

Well, the Grindstaff store project is DONE, finished last night. I added grass all around the concrete base for the room supports and pump, some bushes and weeds along the bottom edge of the entire building, two figures standing outside (Mr. Grindstaff himself looking in the direction of the tracks and another guy looking at him), and then I painted some new and old oil splotches in several spots on the small concrete base, as well as new and older bird poop on the roof. I continued the oil spills to the gravel, roughly where you’d expect to see cars sitting at the pumps, facing either direction, and trailing off toward Stoney Creek Road. As the gravel lot needed more randomness, I sprinkled some ground up leaves and some random small debris especially on the outside edges as you’d expect. It’s now no longer a consistent monochrome surface. 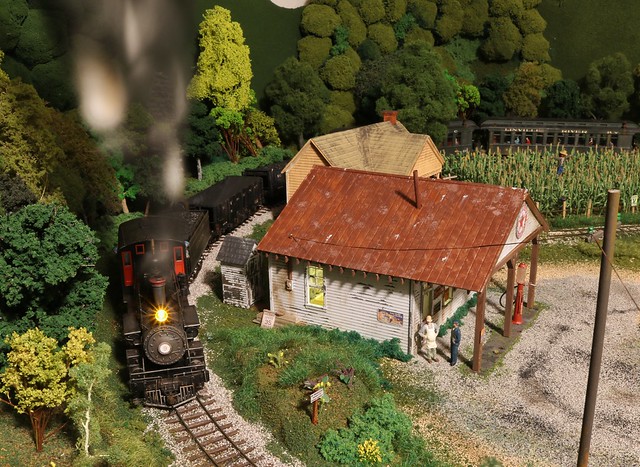 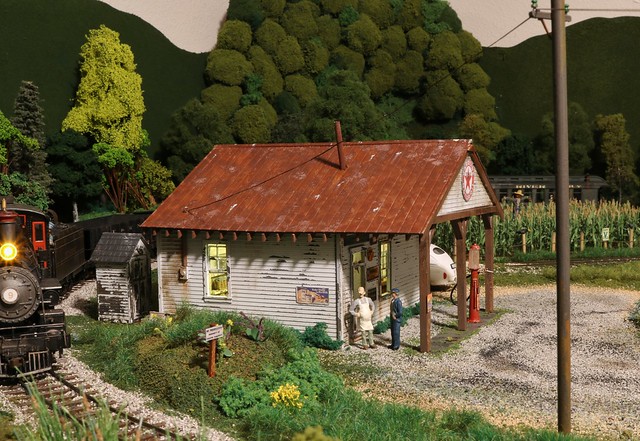 I started this project with a simple sketch when the pandemic started, in April, and it almost feels weird that it’s actually done. I’m so glad I did this as the pre-built structure that was sitting there never looked ‘right’ to me. I had a blast working on this and now I’m thinking of another project. Maybe a small shack that has burned after being hit by lighting?
1944 Willys MB #366014
MVPA, REMF, former US Army Captain
Top

On the original store I used for inspiration (a couple of photos of the store at Carter, TN, back when it was made of wood, in the 30s), there was a two-sided Texaco sign facing toward traffic on the road. It was connected to the roof and I didn’t want to re-create that as it hung from chains from a thin metal bracket, something that could be easily damaged when taking off the roof to show off the interior. So, I later found a photo of a pre-war shepherd crook style sign pole, and I recreated that with the wire from a coat hanger (it took a few tries to get the shape somewhat correct).
I was pondering how to frame the signs on to the pole, as the real one used turnbuckles or metal brackets. After using a grinder bit to cut off the ends, I wondered how I was going to attach the sign into the center. Then, as I was throwing away a soda can it just hit me has an epiphany.
I cut the shape out the side of a Doctor Pepper can, glued it in place with ACC, and spray painted the whole thing black.
After blasting the whole thing with black spray paint and then dull coat, I just glued the signs into place, and test fit it onto the layout. Afterward, I weathered it with dry brushing and some light washes. 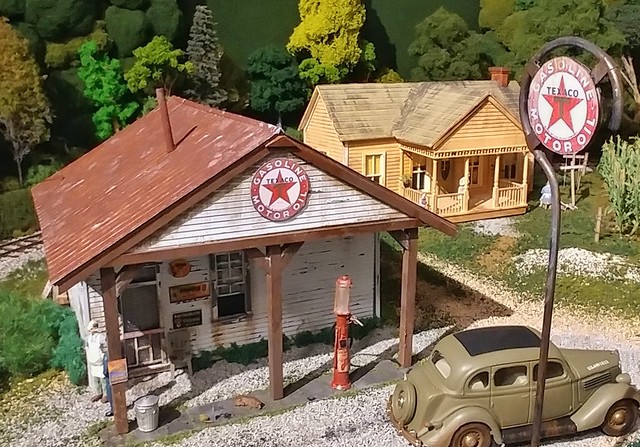 While the brackets aren’t perfect, only an expert on 1930s Texaco signs would know that by looking. I like how it turned out.

And here I am a few days earlier, enjoying running trains (thanks to my long-suffering wife, Jennette, for the shot): 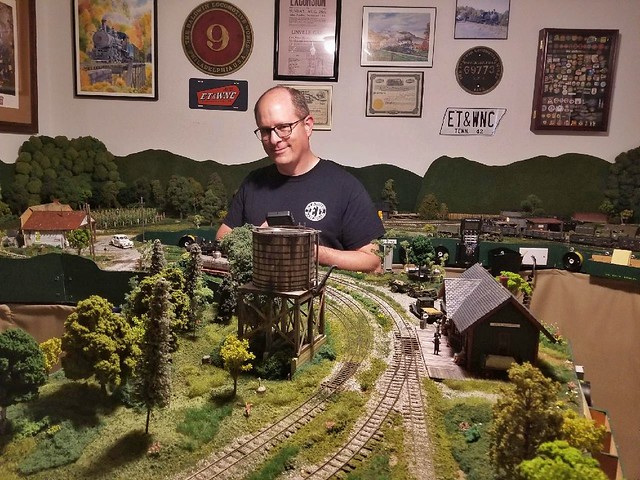 Lee, excellent work as always. Any thought of adding a good ol' American hound dog within or just outside the store? Just tryin' to help you stay busy for the duration. Rufff !

I shot this video late last night, on my third attempt, just to show what I’d been up to and for those who have just seen the layout through still photos. It was all in one take, so when my phone booted me off near (but not at) very end of it, I didn't bother shooting it yet again: https://youtu.be/CRj4z_RbD3U

Ed Roberts wrote: ↑
Wed Jun 10, 2020 1:11 pm
Any thought of adding a good ol' American hound dog within or just outside the store? Just tryin' to help you stay busy for the duration. Rufff !

Just saw this on eBay, 15 bucks and postage. I'm not sure if these trucks would have been common Stateside, but I just got to get this as I've never seen one for sale anywhere else. I didn't even know this model existed! 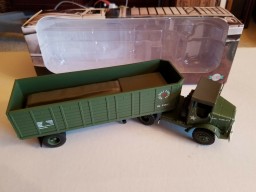 The great thing is, all I need to do is remove the red ball Express markings off of the trailer, then add railroad unit markings to the front bumper, then weather the thing. I have plenty of stuff to throw into the back of it, lots of oil drums and things like that.
1944 Willys MB #366014
MVPA, REMF, former US Army Captain
Top
Post Reply
220 posts