Usual caveats from me. 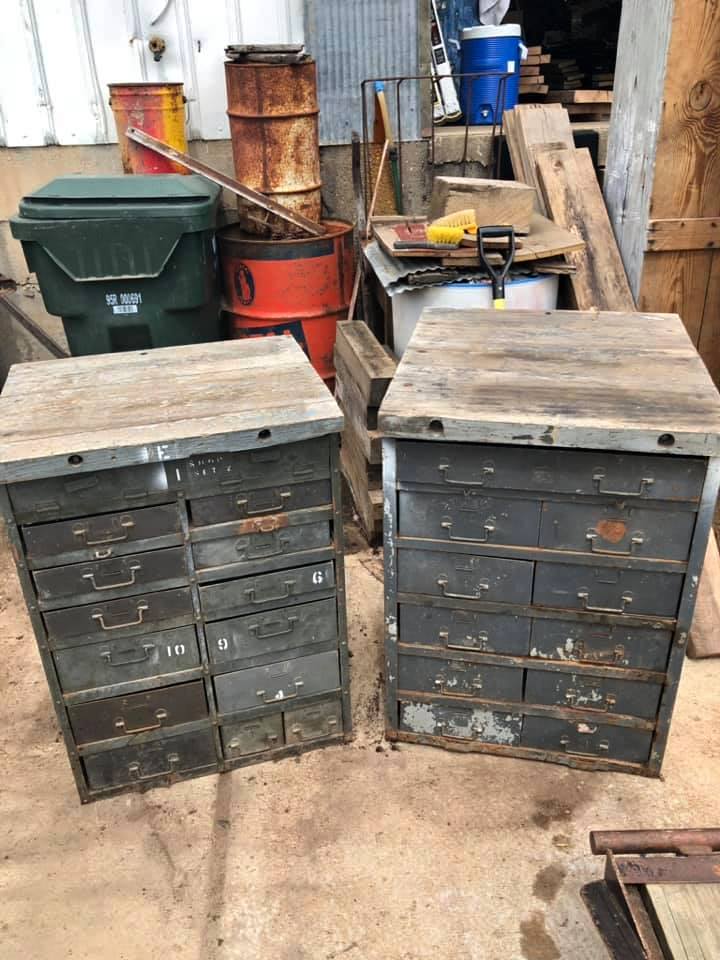 Wingnutt wrote: ↑
Wed Sep 11, 2019 4:51 pm
Redneck,
While the general shape, configuration of the drawers, and the handles DO resemble a 41-C-15 cabinet, 41-C-15 cabinets did not have all those key-latch locking provisions.

I appreciate your input. You may be right, there's also the possibility that, as a body man / metal worker, he could have added those on.

I came across similar cabinets under the following manufacturer names:

Just out of curiosity, what would a nicely restored 41-C-15 be valued at?
Top

That's what Silly's MB suggested, and I agree.

On your other questions...

- I don't recall seeing any legit WWII 41-C-15 cabinets with a data tag or even with the "41-C-15" (a wartime format Federal Stock Number (FSN)) stenciled on it. But I could be wrong. If there was one like that in our G503.com community your best bet of finding it would be on this thread. Mine has an 11-digit FSN on a data tag along with the OEM, but it dates to the 50's.

- Value on these cabinets ranges between $~35 and $150+ dependent on market, condition, and circumstance. Shipping is prohibitive.
TEMPORARY DUTY
Top

I've not seen any number on the older cabinets. I have two that came out of Martin Aircraft after WW2 and went into the basement workshop of a deli owner who had his business across from the factory. I paid $400 for the pair. But mine are in very good original condition with excellent condition tops that have never been drilled for a vise.

So, I'm gathering that they aren't worth much monetarily. Perhaps I'll restore it one day and enjoy it. After seeing the photos of how it was used in the field, I have a new appreciation for it.
Top

Finally found one. It's in Navy gray and appears to have been that color a long time. The top drawer appears to be missing a divider that went from side to side.

These became available locally. Hope to pick up one of them, but don't have room for all... 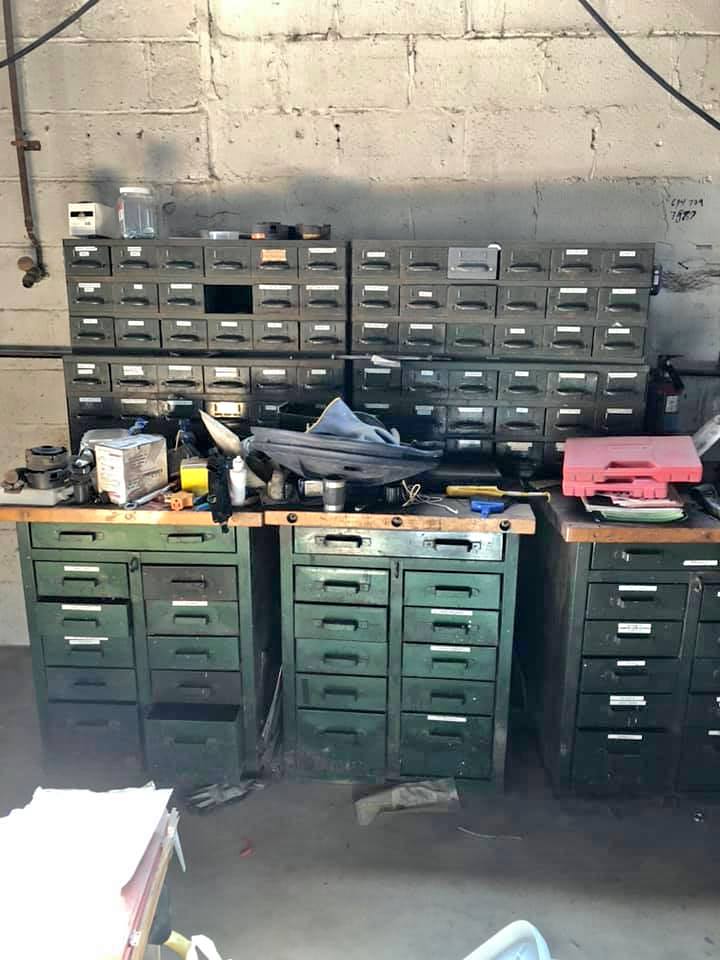 Those are nice examples, they look to have been taken care of.
"Peep" was the name used by the Armored Force for the 1/4 Ton truck early in WWII.

Friend and G503 owner Mat Curtis sends me a link the other day to a Facebook Marketplace sale saying "Are these like the cabinets for Iffy-Lube?" Why yes, yes they are. Except these aren't WW2. Instead the appeared to be two variants of the MIL-C-40009D-TYPE-V. I thought about it for a while then decided to ask the seller anyway. Well $200 poorer I have these two now. 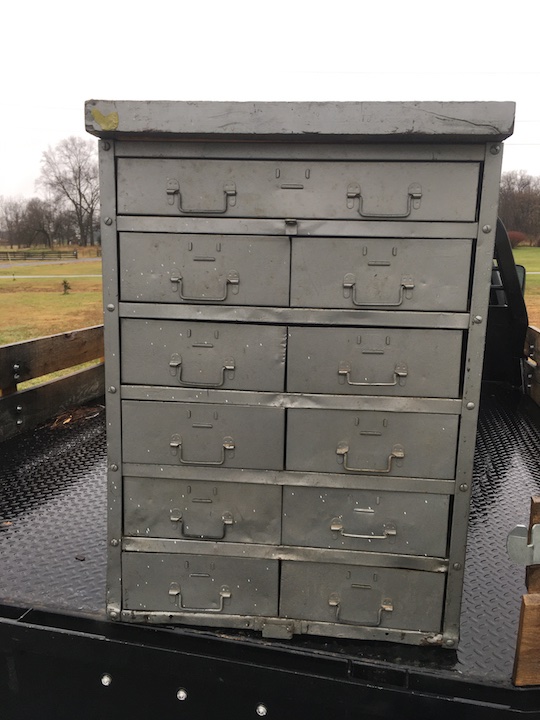 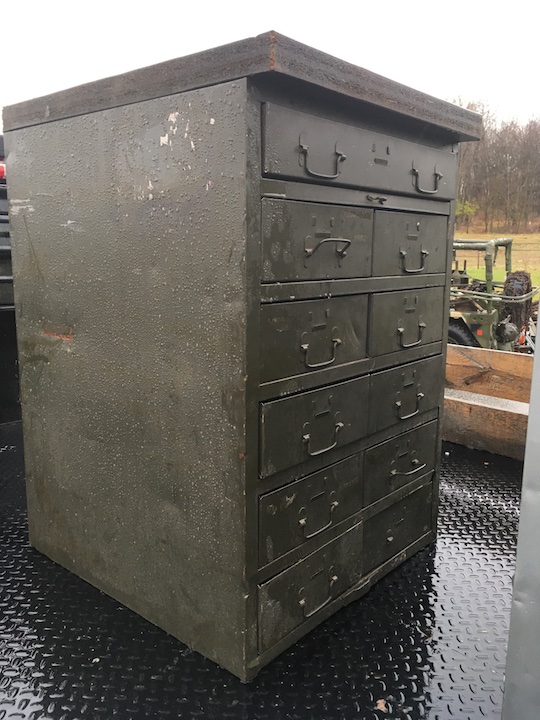 The repainted one has a butcher block top and is bolted together. No data tags, property tags or other markings were found. It's now in my shed to be put to use. 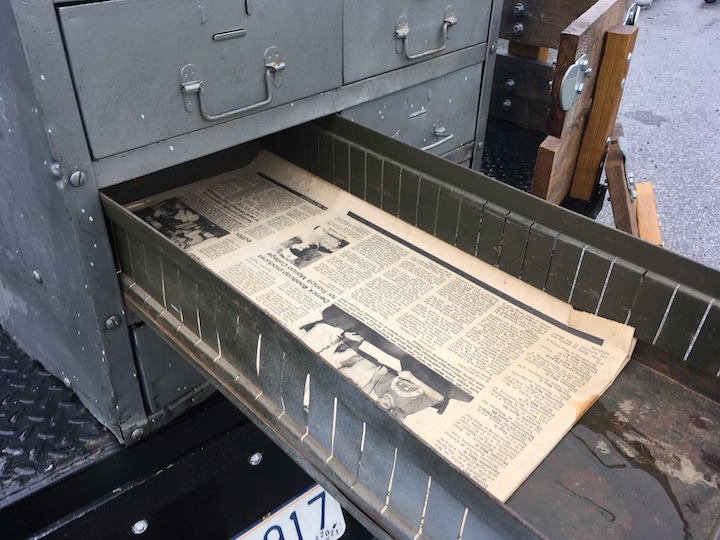 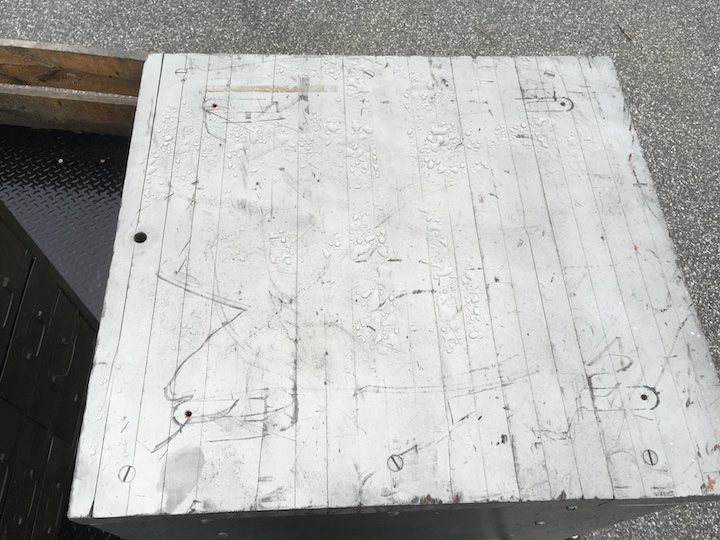 The other I brought into the basement to be near the tool collection so I could fill it with my later tools. It has the composite top. It also had an OMB sticker on the back so I knew it came out of Federal service somewhere. But the only other tag I could find was on the top drawer and was painted over in the exact shade as the rest of the box. Scroll down for more on that. 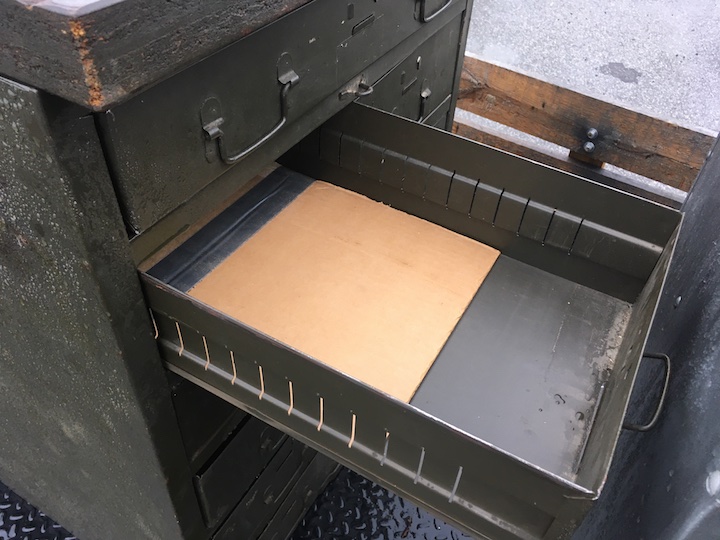 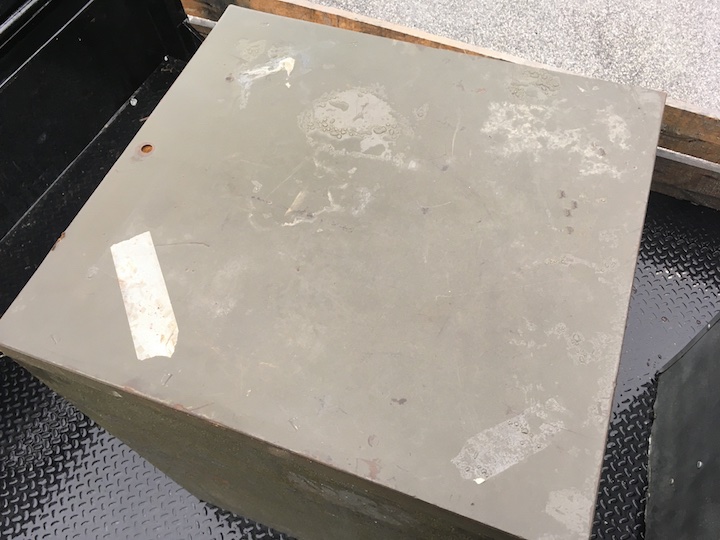 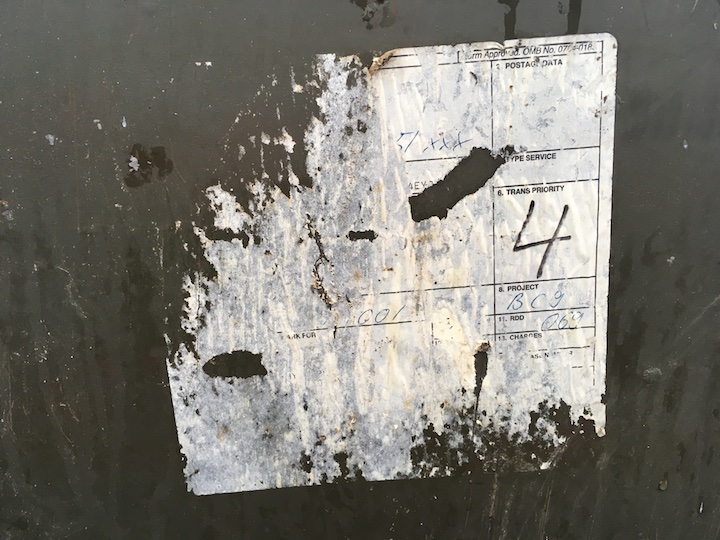 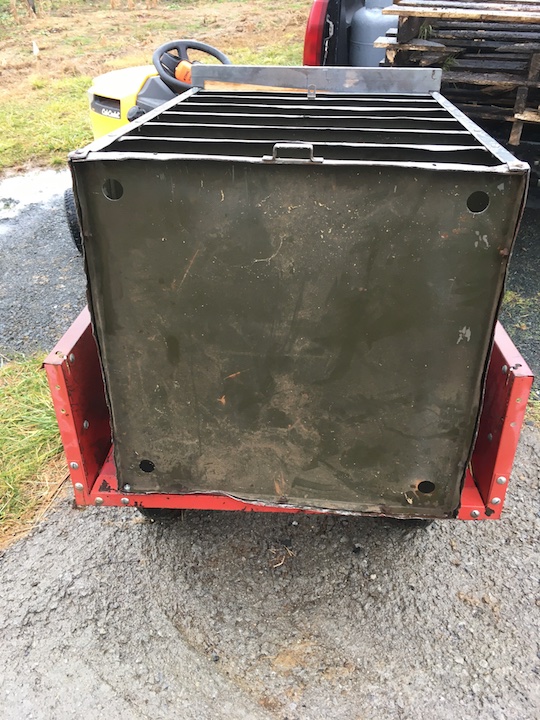 So I didn't have much hope for the painted over sticker. But I gave it a go. Paint Thinner didn't even cloud the paint. So I tried some EZ Strip. Real gentle and careful to not get any on the paint around the tag I started rubbing. Praying it wouldn't take the ink off the tag too. And SUCCESS! 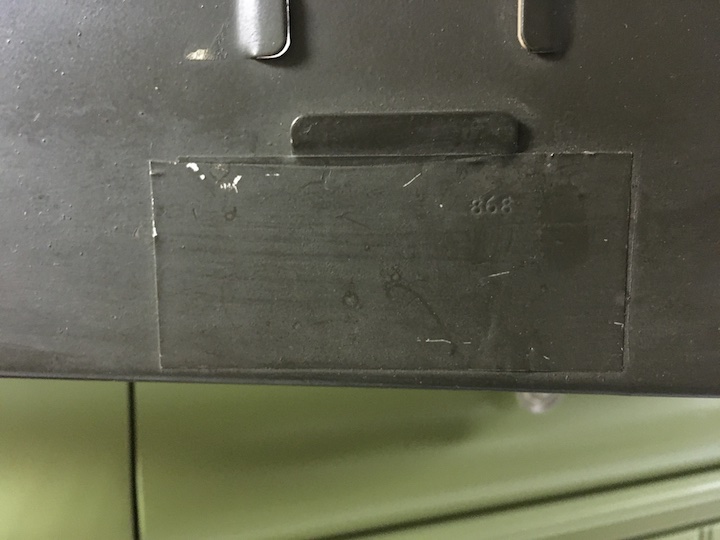 Turns out this cabinet was from a 1984 contract. That's quite a bit newer than I was expecting. Is there a catch and release program for tool cabinets that are too young? 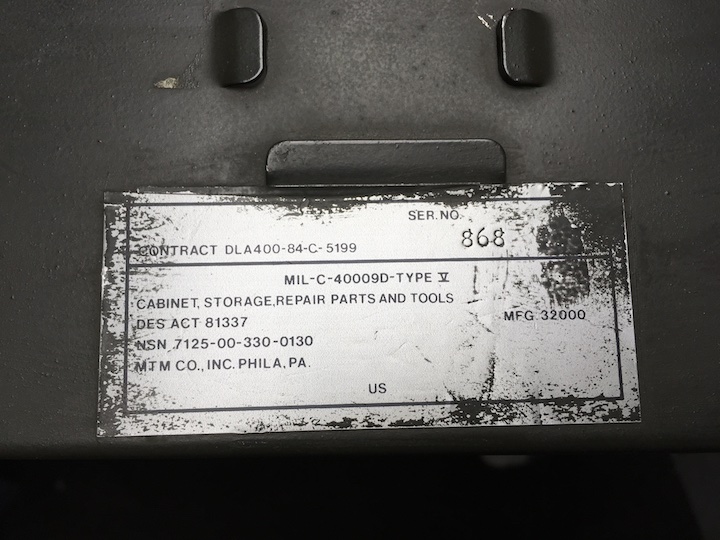 Lastly you might have noticed the large hole in the back center of the top. I don't know what it was for. But it's factory. Because on the underside appears to be a captive nut.

@ rustman:
The hole in the back center top is to attach the cabinet to the inner side walls of the M109 or similar shop van trucks.
Special rails (angle iron) with holes, just below the side windows, are attached to the walls for that purpose.
The cabinet´s rear top edge is placed under the rail, and a bolt is inserted throug both the rail, and cabinet top, and tightened.
Instructions on how to mount the Cabinets are in the newer 9-2320-361 series TMs for the multifuel 2-1/2ton trucks. However, there are no instructions or pictures in the older 9-2320-209 series TMs.
Regards, bruce
Top

Thanks for that. Pretty cool to know.

Friend, colleague, longtime and venerated G503.com tool forum contributor AZ Jeff recently texted me this, and when I collected my wits and my jaw from the floor, I asked his permission to post it here so others could enjoy it as well. 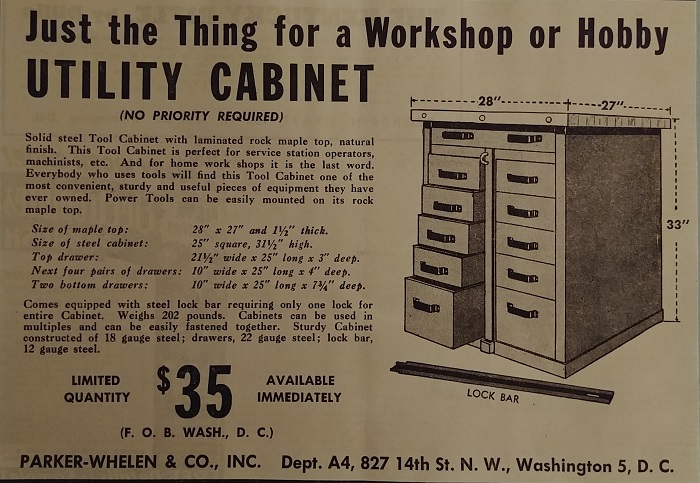 Just as cool as the ad itself is the source and date: American Rifleman, March 1945. You read that right. March. 1945.

There is ZERO doubt those are 41-C-15 cabinets. Judging by the reference to "limited quantity", one might safely infer that they were not being manufactured. That points to surplus sales. The “priority” in “(NO PRIORITY NEEDED)” refers to the WPB’s priority system, which points to military sales. No priority needed in a commercial ad also points to surplus sales. Before the war is over! I have not done any deeper research to confirm that, but that is my interpretation and I am sticking with it until proven otherwise.

I found the same or similar ads in several other magazines and trade journals, including a July 1945 Popular Mechanics, linked here.

This is almost as cool as the Jeeps-in-a-Crate sales.

If you’re not familiar with the Whelen name, it refers to Colonel Townsend Whelen, a famous outdoorsman and hunter. He was the commander of the Frankford Arsenal in the 1920’s. With the shop foreman, James Howe, he invented the Howe-Whelen gun sight. I don’t know who Parker is, but Parker-Whelen was famous for a bolt-sleeve sight for the Model 1917 Enfield rifle, as referenced in “The American Deer Hunter” by Francis E. Sell, 1950. Parker-Whelen was previously known as the National Target and Supply Company, at the same address.
TEMPORARY DUTY
Top

This makes me giddy! Nice picture of the locking bar. BTW SincityGPW has a locking bar. He's sent me a template to make my own along with some pictures. It was then I realized it was more work then I thought. You'll note it is NOT flat. Interesting about the weight. I knew they were heavy. But yikes over 200 lbs before putting tools in it. Eeek!

As for the location of the vendor/reseller. I haven't dug into the history of the locations but across the river into Virginia at Springfield is a HUGE GSA warehouse to this day. I think it's the largest wood framed warehouse on the East Coast or possibly in the country. A lot of government materials moves in and out of that. Going the other way, Fort Meade used to be a site for GSA Auctions. So within an hour of that office are two potential locations for the USG to surplus excess War Material.

Hey, Matt. Yup, that's exactly how I felt. And yes, the illustrator did a very fine job of the drawing. While he did not exactly capture the shallow U-channel shape of the security bar or the even shallower U-channel shape of the piece that is spot welded onto the bottom of it (there are a number of photos and diagrams of it floating around...), it was nice to see the bar in the drawing, and he managed to capture the essence of the cabinet perfectly, including the hint of the wooden slats that make up the butcher block top, and an even stronger hint of the three mortises for the threaded rods holding them together. It's a wonderful ad.
TEMPORARY DUTY
Top

I found this forum after searching endlessly trying to find more information about a cabinet I picked up on FB marketplace. I was so thrilled to find this forum and see all of the pieces that everyone owns, as I couldn't figure out if this was some sort of custom piece a person made or what. I've never seen anything like it before. I wanted to share images from a restoration piece that I recently finished.

I pulled a pair of these cabinets out of a barn in Central PA. I wish I had more before images to show how beat up it was - there was glue residue, rust, among a missing board on the top. I did a full restore, where we made the top into a proper butcher block using the original wood. I did about 7-8 layers of spray paint in a matte grey/blue. Forgive me if this is not standard, as I see a lot of you keeping yours the original green, but I wanted something that I could use in the home rather than work on it.

My favorite part is that it still had the original tags on the drawers, and although are beat up, look so great as they match the color the top came out to be.

I'd love to hear your thoughts on this after taking a peek at the images below! 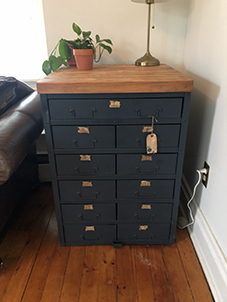 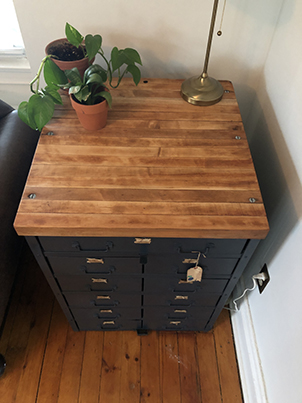 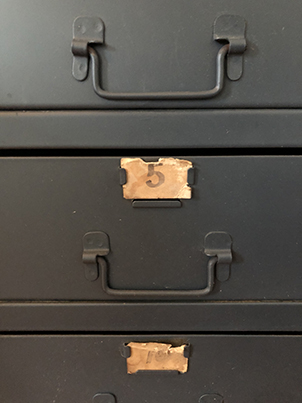 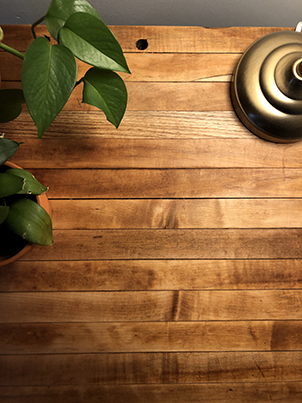 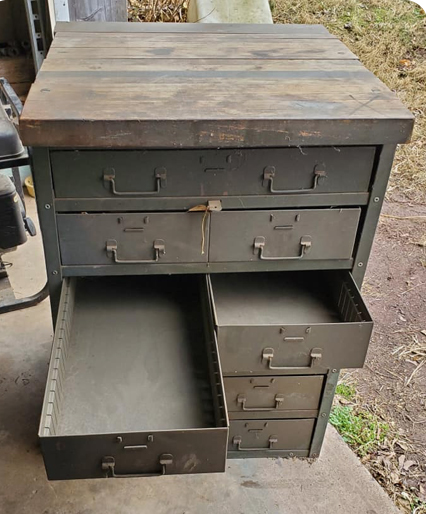