I have been taking some close-up shots here and there for the heck of it... 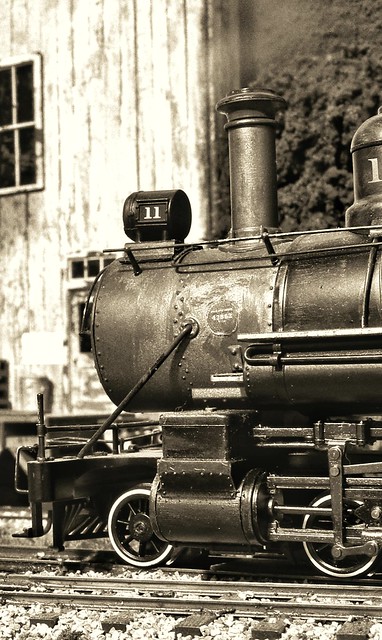 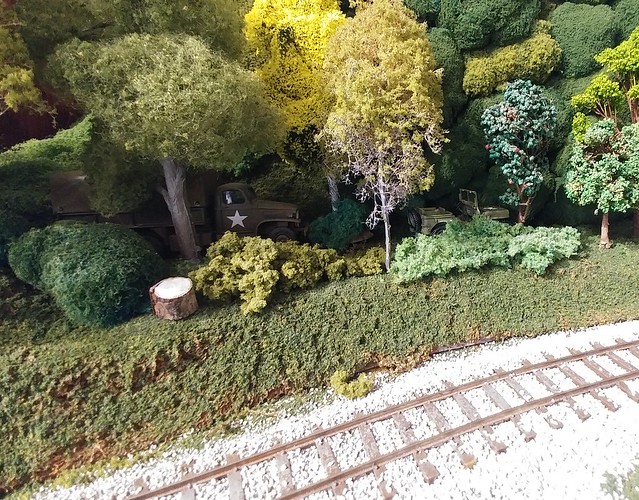 I used to go to the area at least once a year, growing up. I don't recall the ET&WNC RS-3 diesels, but I do recall the former Southern Pacific RS-11s they had and saw the Porter 0-6-0 fireless steam locomotive running several times (and even got to sit in the cab under steam in the 80s once).
I haven't been back to the area since they pulled the tracks up and to be honest, I'm not looking forward to seeing a trail there today.
But now that I know much more about the RR than I ever did as a kid, I'd love to get back there to check out some spots I didn't know about, including a section of dual-gauge track still embedded in concrete along a street in Elizabethton, as well as following the old line all the way to Boone, as roads either run close to or on tope of the old road bed almost the entire way.
1944 Willys MB #366014
MVPA, REMF, former US Army Captain
Top

First I have heard of these, a link for other curious folks: https://en.wikipedia.org/wiki/Fireless_locomotive
Roy
Top

I recently realized I’m at the 5th anniversary of the start of the layout.
So, here we are on August 18, 2014, the first train reaches the opposite end of the line. Only 6 days before, the first train moved on about 3 feet of track at the other end: 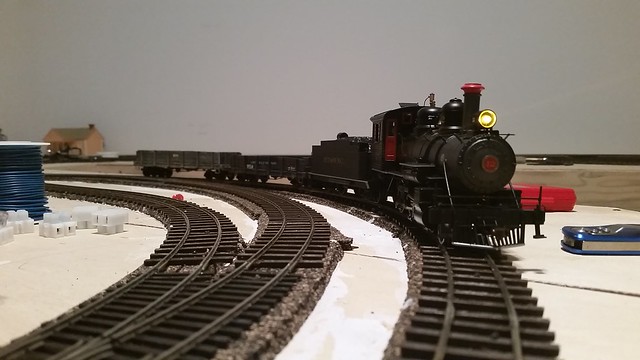 North American Rayon's 0-6-0 is listed in that link, perhaps the last steam locomotive running commercially in the USA for it's original owner for it's original purpose (never having once pulled any fan trains that I'm aware of). It is for sure part of the final operation of two different steam operated carries in interchange in the US (North American Rayon and the EWT&WNC, running 2-8-0s until 1967. The ET&WNC engines were later traded to the Southern RR for their steam program, one still runs today as it's original Southern RR #, 630 at the TN Valley RR at Chattanooga).
I have photos of myself in the cab under steam in the 80s (I really need to scan those), and I saw her running several times in my youth.
More info here:
http://www.cartercountyhistory.com/narc ... e-pot.html
https://www.steamlocomotive.info/vlocom ... splay=1145
1944 Willys MB #366014
MVPA, REMF, former US Army Captain
Top

Thanks for the additional links, there is nothing like watching a steam locomotive in action.
Roy
Top

Last night, 5 years ago to the hour, I took a 'now' photo compared to the first time anything ran on the layout. 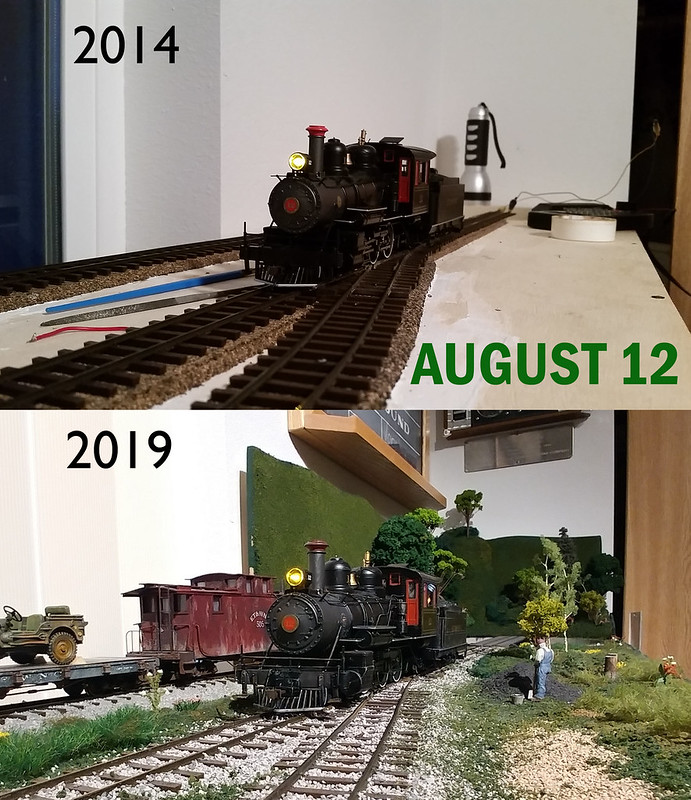 There wasn't much track beyond the camera's view at the time. A friend with an HO layout was helping my lay track and wire it all into place (as I hadn't built a layout in many years before that) and he insisted we temporarily hook up some leads to the rails to run something. I'm just glad I got a photo of it then.
1944 Willys MB #366014
MVPA, REMF, former US Army Captain
Top

5 years exactly to the hour for the very first train ran to each end of the layout (the turntables weren't in yet, though), re-created last night with the same locomotive/cars matched as good as I could to the location and camera angle: 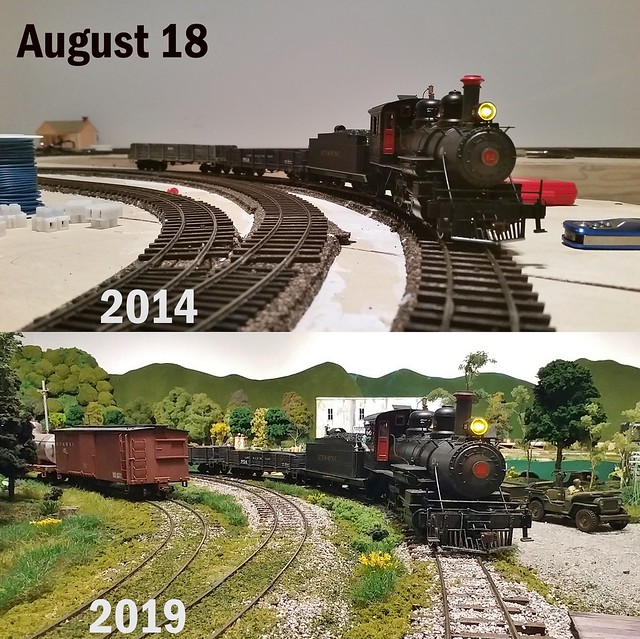 Some crossing and no trespassing signs are going up all over, in response to frayed war nerves about the recent German spy team caught with plans to blow up key infrastructure points in the US! 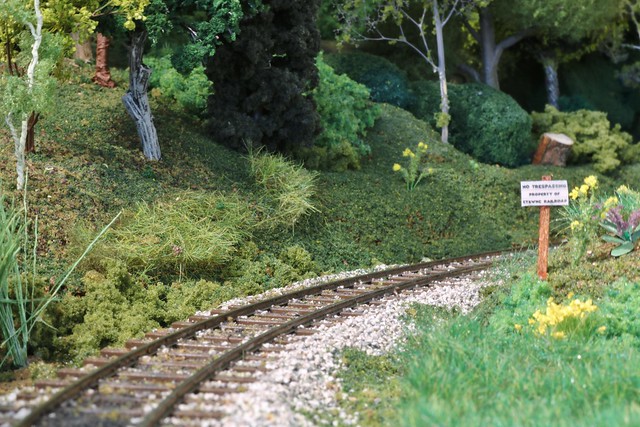 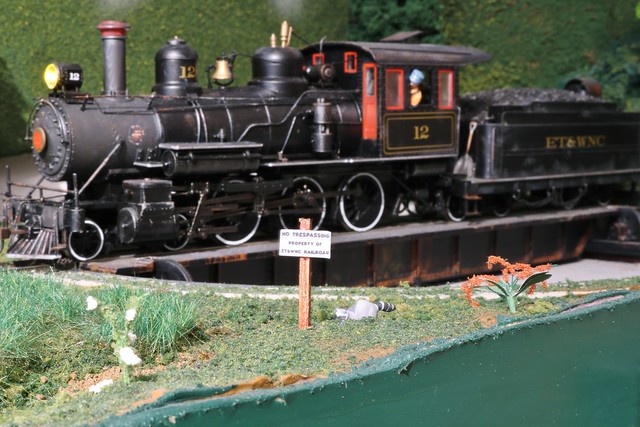 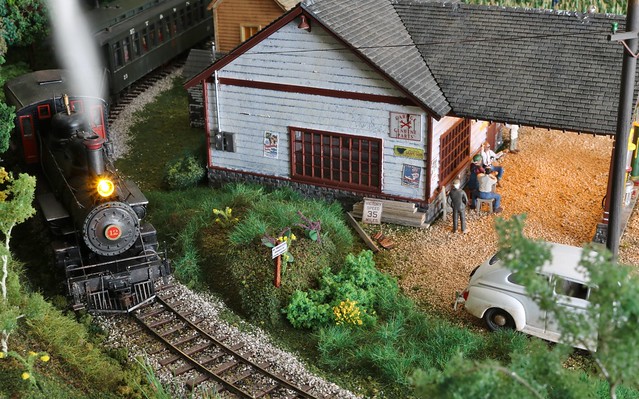 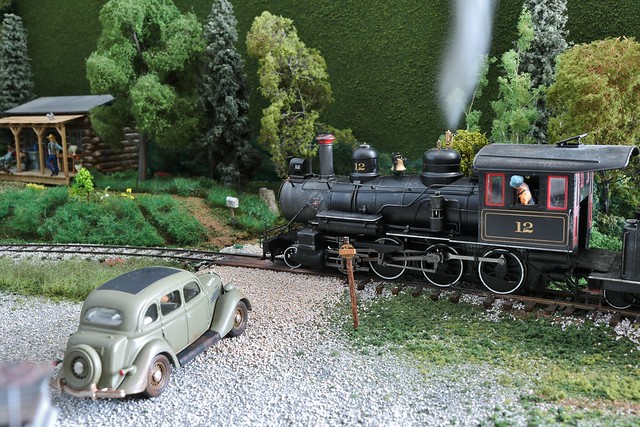 On the 12th of this month, I had my layout open for "Oly Ops," a charity event where people come from all over to run two op sessions in one day on local layouts.
Here are Toby Loftus and Eric Bessey from the Portland, Oregon area, taking a short photo break from running trains on the layout. Good guys, both! 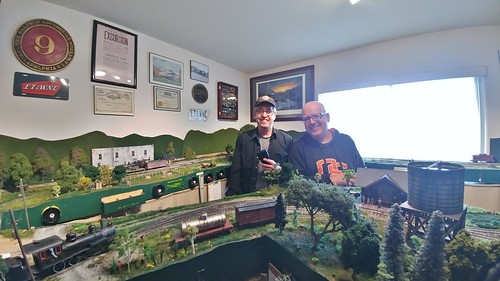 A sailor heading back to the USS Indianapolis waits for the westbound train to Johnson City, at Buladeen, Tennessee: 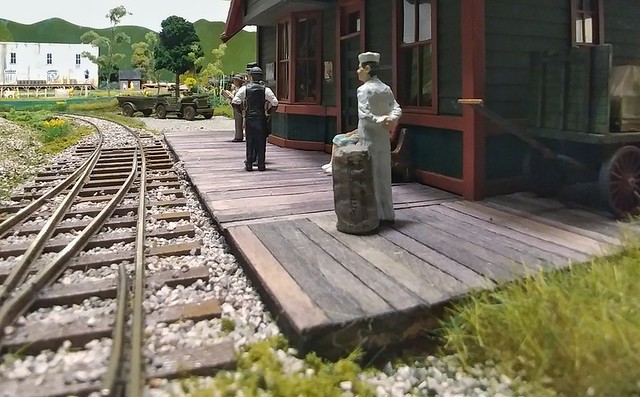 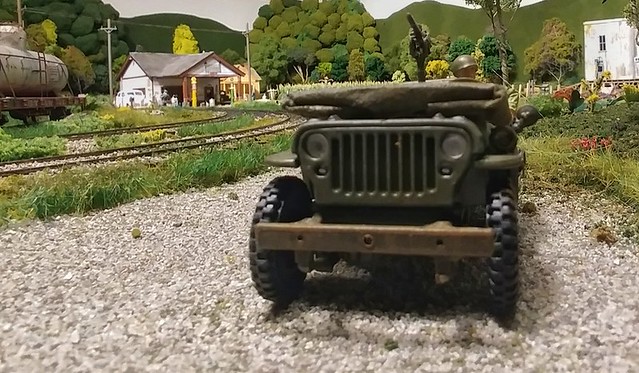 Along with the layout, I also have a related hobby of trying to find original items from the RR I model.
I just got this original ticket from the Linville River Railroad, a subsidiary of the ET&WNC, from the pre-war era. These are almost impossible to find, especially in unused condition as they were printed on very thin paper: 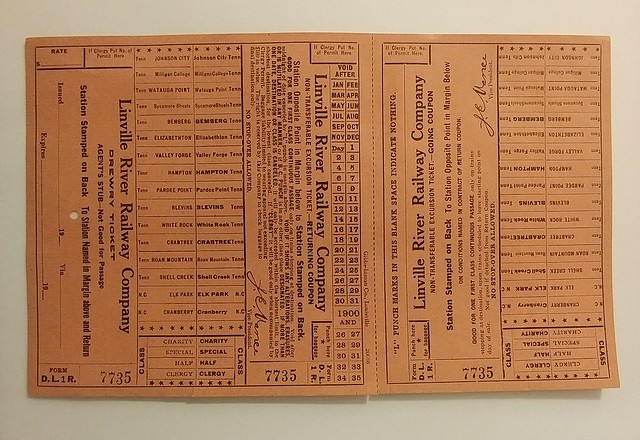 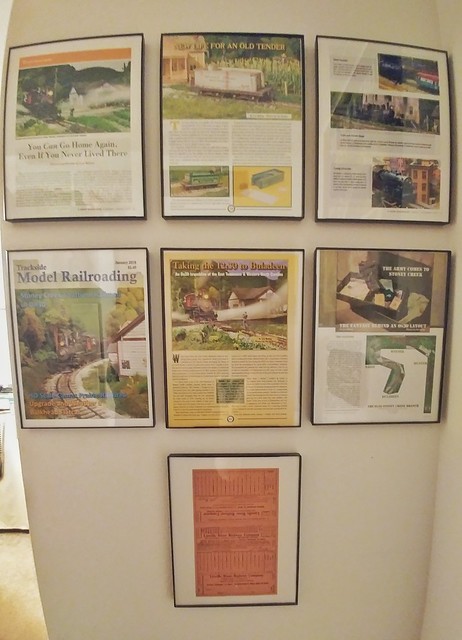 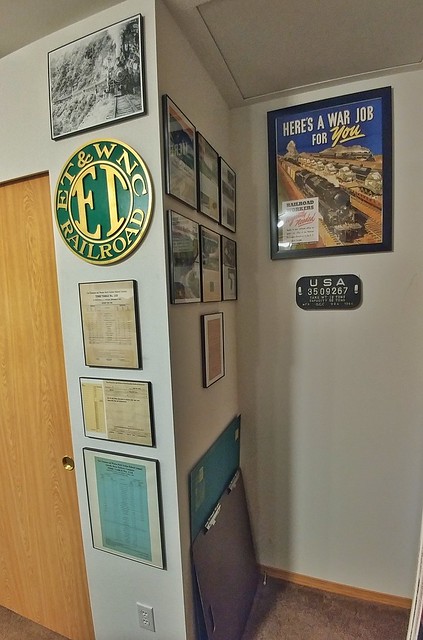 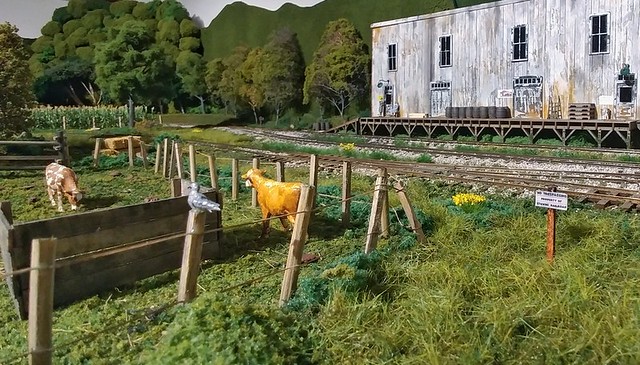 I swore I saw the scale ghosts of conductor Cy Crumley and engineer Sherman Pippin. I snapped some shots, thinking when I looked later, they'd just be of empty track. Halloween came early for the ET&WNC! 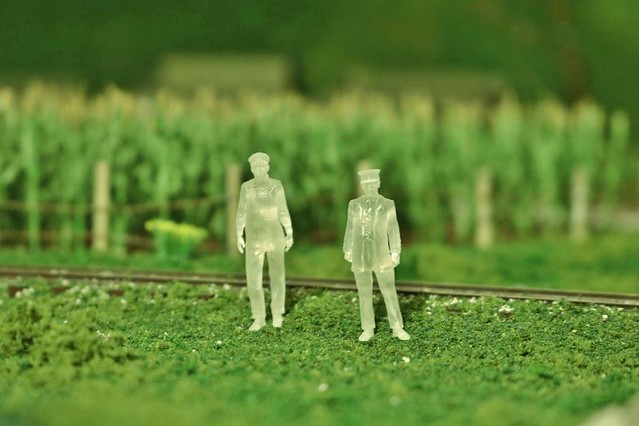 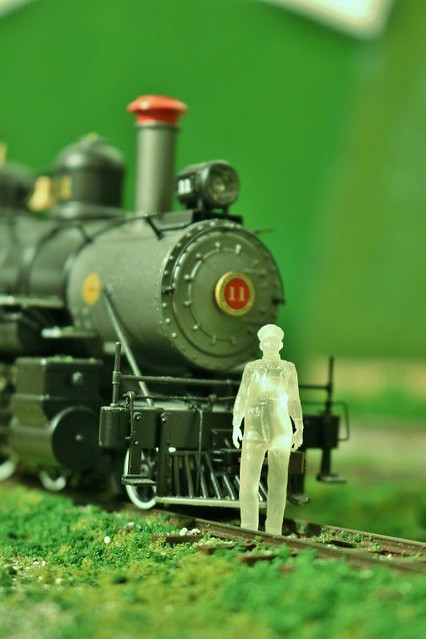 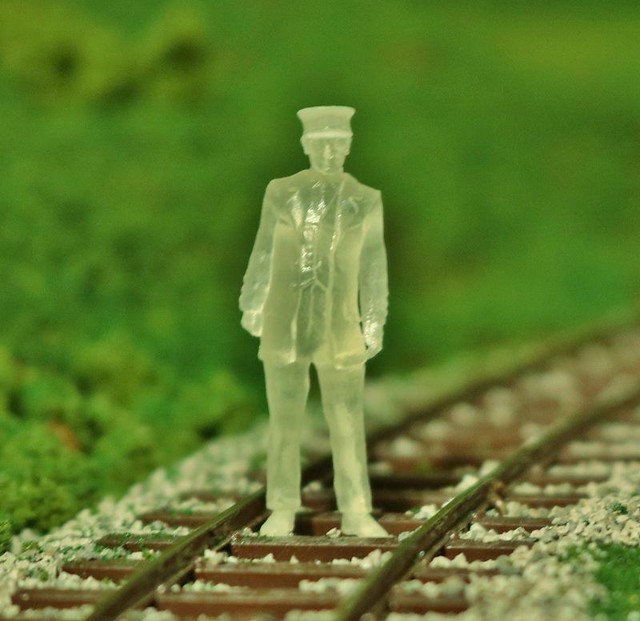 They just walked out of the cornfield at the Ensor farm, looked around, and Cy walked down the tracks to near the grade crossing at Sadie. Sherman went directly for # 11, which was sitting cold at the time. A chill came over the air...
As these two were gentlemen in life, I expect no evil from them now. As the locals said after I showed them the photos (taken from my Speed Graphic box camera), "Them ain't haints, they's wouldn't do nary a bit of evil h'yar!"
In other words, such distinguished men wouldn't come back as bad spirits. At the worst, I was told I might get spectral letters of admonishment over some of the working conditions on the layout.
1944 Willys MB #366014
MVPA, REMF, former US Army Captain
Top

I created sets of scale builder plates, each with the right serial numbers and dates for ET&WNC ten-wheelers 9, 11, 12, and 14. I also used photos of the real number plates to make scale versions of them.
Bachmann did a great job on most of the engines but they always do their plates are opposite images of what they should be (black lettering on bronze which of course is opposite of how they looked in real life).
I converted a #12 to 9, rather easily, but the number plate had my stymied until I managed to find a good photo of the real one, then I added a light color background to the number as period photos (and movie film) of #9 during WW2 clearly show it wasn't red like 11 and 12's were.
So, you just print these on photo paper, 4X6 and they should be scaled right. I also included some 'no trespassing ET&WNC" signs as well and some period RR crossing signs I used on my own layout.
Click here for the images of the plates: https://flic.kr/p/2hwAdi5
I then punched them out using a "Maxi Punch Set" stock #473660 from Hobby Lobby. It's largest die was EXACTLY the right size needed for the front number plate. 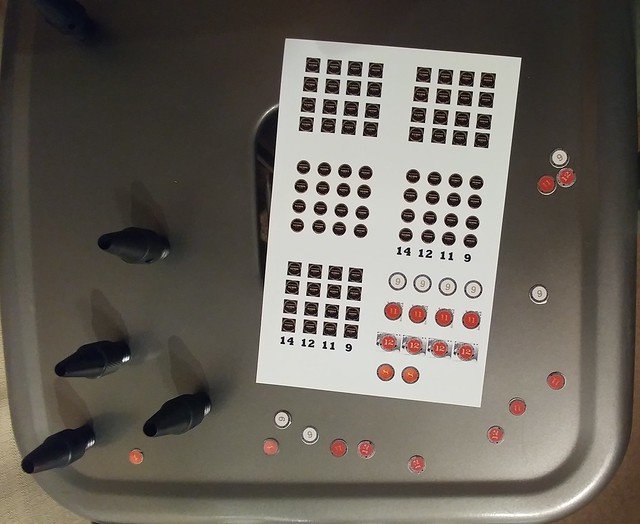 I did the builder plates much earlier and did them with an exacto knife, which is why I had to use a punch for the number plates. With this, I think you can improve the look at the front end of these, as well as making a #9 if you want one (Woodland Scenic dry transfers makes a set that is a perfect match for the cab and dome numbers)...
Just keep in mind if you pass this along to a model railroader, the number plates are from photos provided by the ET&WNC historical society and I created the builder plates myself, and they're copyrighted by me. Please don't print and sell them...
1944 Willys MB #366014
MVPA, REMF, former US Army Captain
Top
Post Reply
227 posts