Can't wait to see it in person

The light at the end of the tunnel is getting brighter! All I have left is to make the 3/8 pivot pin for the trip rod, add springs to the trip rod, and the permanent body lock. Jeepjop is looking into having the pin and body lock made, so if anyone needs either of those parts, there should soon be a source.

I had to replace the threaded portion of the trip rod, and weld a new spring tab on. I was able to save the original 3/8 heavy nuts and the link. I also sourced correct jam nuts and bolt for the tailgate trip handle, as mine were missing. The bolt is a correct "tall head" bolt, and it perfectly matches the specs of an original. I had to weld and grind the head.

I installed the data plate (from Robert) with the correct 3 1/2lb tinner rivets. I spent a lot of time measuring rivets with a micrometer, and I am 99% sure that 3 1/2 is the correct size.

I installed a VWOM harness, went on like a dream! Quick test of the electrical circuit and everything checked out fine.

I mounted the amber side reflectors. I was able to save two of the original screws, and I made two correct round head slotted screws for the other side. Nicely parkerized.

I am not going to mount the lubrication chart holder. I personally don't like the look of them, but to each his own

. Since those are Corps of Engineer marked, I think they would have been originally supplied by the gaining unit, and not necessary for every converto, even if it has the holes for one.

I opted to go with a six inch star on the tailgate only, it looks nice, but I deliberately used a hand cut stencil so there would be a little over spray. Markings are always too crisp on restorations, a little blur on the edges just makes it look even better.

I have spent many hours researching the "correct" painted markings for these trailers. I have not seen or heard of a single trailer that had any remnants of blue drab registration numbers. The only markings ever found have all been white, and they don't follow any factory guidelines or standardization. Most are different fonts and sizes, and are almost certainly "wartime motorpool/field" or "post war rebuild" applied.. My honest opinion is that they left the factory without any stenciling. I am not going to add any additional markings until I am able to find more evidence. While I'm not worried about keeping it a factory class restoration (I already added a star to the tailgate), I don't want to add fantasy registration numbers, yet I also don't want to add the field style if there were indeed factory applied markings... Just have to keep digging.

I am in about the same point of time in restoring my Converto. I was impressed with your precision tub strecher of a small tree and a Ford ranger. My wing walls were well out of tolerance and I used the long ram cherry picker and a come-along to re-align back to center.

Mike Wright hand delivered a set of springs for the tailgate rod, talk about service!

All I have to do is paint them and they'll be good to go. The permanent body lock and the tailgate handle pin are the last two things I need for it.

Thanks for all the comments and tips along the way.

Boone...I think you might be correct about those Convertos being delivered without a painted-on blue drab USA number. Converto used the assigned contract USA numbers to number their trailers as you can see stamped on your data plate so this was probably enough. Once in the field, it would be necessary for a larger font to be used to make them more easily identifiable without a magnifying glass!

Great job on the resto, by the way!
Chuck Lutz

Thanks Oz! I'm really happy with how it turned out. It isn't the most pristine converto out there, but I think it received the most thorough restoration it could have.
The part that makes me proudest is that there isn't an ounce of bondo or other filler material, it's all steel and paint. It made for some extra time welding and grinding, but it was worth it in my opinion. Mr Flap Disc is our friend!

Thanks for the info Chuck. I have been keeping an eye out on new convertos, and I have yet to see any patterns that would support factory applied markings. 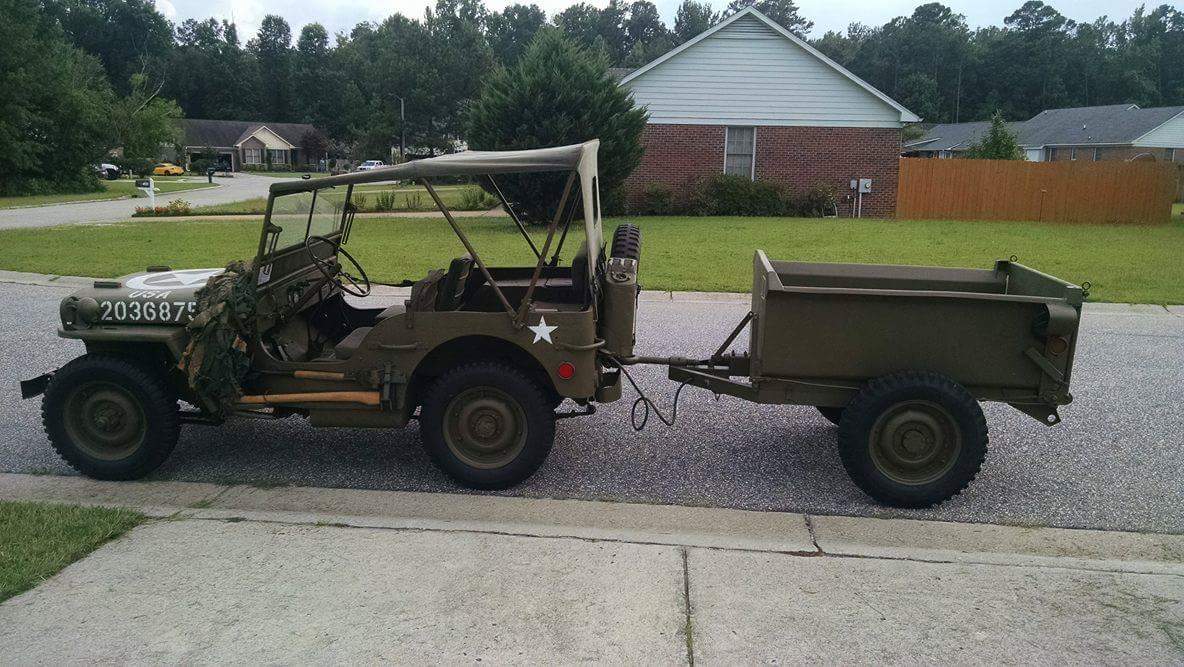 Were the comvertos ever unit marked? If so what is your plan for markings
Oz

Can you post some images of how the long rod fastens onto the two dump release locks. I'm a bit confused by this as mine are just completely welded over. Are the locks pressed on? DOes the pin keep the rod from turning? Just trying to figure this out.
Oz

Mike Wright hand delivered a set of springs for the tailgate rod, talk about service!

All I have to do is paint them and they'll be good to go. The permanent body lock and the tailgate handle pin are the last two things I need for it.

Thanks for all the comments and tips along the way.

I am restoring a Converto right now and am looking for specifications for the springs on the tailgate latch. Your pictures help me but if you might be able to send me the measurements of these springs it would really help. Thanks!
Don Hartzell
Top
Post Reply
45 posts