Zeph. We're did you find the distro rebuild kit?

I need those bushings to rebuild one of mine
Top

It actually made more sense to break the spot welds and other bead weld to remove the old dash and replace with another donor dash.

Mind u I didnt do that work!

I have a good freind who is a body man who did the replacement. It was his idea. He actually said it was easier to replace the entire dash then Try and weld in and graft in a piece like this

It certainly looks a lot worse in the photos than the naked eye for sure. Likely due to the flash. I think by the time I'm done with it, most won't even notice it. However, I may have a spare dash out there, so something to think about. I hadn't looked at the dash to totally replace it. Might be a good option if I can't get it to the point I can live with it.

I need those bushings to rebuild one of mine

John at MWM has the distributor kits.
Zeph

I continued on with the window box construction project. Had to manually bend the top stiffening bend. Had to bend it over about 3/8's of an inch. If I bent it prior to all the multiple bends, it just wouldn't work out. All of the other bends, taxed my limited skills as they are:

Welding up the lower section so it doesn't leak. May look for some type of water proof sealant to paint on the inside. Not sure what:

Had to weld the inner channels prior to welding on the cover holding tabs:

With the lower cover holding tab all welded on here:

Also was able to reuse the original brass drain nipple:

Amazing how little solder the factory guys used to install the nipples for a water tight fit. I think I used enough solder to complete about 50 trucks on one nipple!:

Zeph,
I would use some type of bed liner or try Flex-Seal. It comes in different forms,tape,liquid and spray.This may make application easier. Just some ideas with no experience with the product.You could also try automotive seam sealer (applies with a caulk gun or brush on).Seam sealer may come in handy for other areas of the body.(Along the floor to body line,etc)
Bob
Top

chibobber wrote: ↑
Mon Feb 11, 2019 9:56 am
Zeph,
I would use some type of bed liner or try Flex-Seal. It comes in different forms,tape,liquid and spray.This may make application easier. Just some ideas with no experience with the product.You could also try automotive seam sealer (applies with a caulk gun or brush on).Seam sealer may come in handy for other areas of the body.(Along the floor to body line,etc)
Bob

I'm thinking you're on it with the seam sealer. Brush on type would be the best I suppose. I think I will seal, then prime and paint the boxes. Of course, I guess I will need to read the instructions on how the sealer would be applied. It appears the original window boxes had some primer or something applied before they rusted through and disintegrated.
Zeph

Zeph,
Eastwood has a couple of you tube videos on seam sealing.I may be wrong on the brushing.May have to use a bondo type squeege set up.
Bob
Top

chibobber wrote: ↑
Mon Feb 11, 2019 7:36 pm
Zeph,
Eastwood has a couple of you tube videos on seam sealing.I may be wrong on the brushing.May have to use a bondo type squeege set up.
Bob

I'll see if I can find them.
Zeph

Have been dodging major storms over the past few weeks. Not normal for us, but I was able to recently remove all of the fiberglass that someone named Bubba used on the fender rust damage. Amazing how well this stuck to the metal:

Both the left and right sides have about the same rust damage:

Ended up cutting out the inner panel above both the wells. Really thin, and I thought I could access the cinch nuts that need to be replaced where the rear fenders bolts will be screwed in to hold the fenders on.

Also will use the opportunity to fit the pioneer rack. I will weld studs protruding from the inside of the body to mount the rack. Needed to align the rack with some spacers to get the correct length of the studs required:

Blasted some of the areas that will need welding. Lots of rust repair along the fender ridge where the fenders mount. Not my expertise, but hey, it has to be done:

Tested how difficult the paint would come off with my blaster. Figured I would do the whole project myself. At least that's the plan for now. Not too difficult to remove, but will take some time. A little here and a little there over time:

Switched over a bit from metal work to woodwork which I don't have too much skill. My son works for a mill, and they had a ton of 2x2 White Oak and Mahogany, I filled my trailer. Why? I have no idea...other than it was free and I thought I might give a couple projects a go.

A project that I actually have had in mind for some time overtook me. Goofing off, I wanted to make a little bar for our Dodge Boys Happy Hour event down in Plymouth this year. I wanted it to fold up for ease in transportation. It also has castors that may come in handy:

Thought this turned out nice:

I also had an extra dataplate, so made my first attempt at stamping one. I'll stick it on the front of the bar after I urethane the whole thing:

With the wood I picked up at my sons work, I thought it might be interesting to make some WWII folding field tables. I have wanted one for a while now. I saw a photo of one that I used as a template. Pretty sure they were 2' x 3', so went with that, and I decided to make four. These things turned out rock solid. I used 3/4" plywood vs. 1/2". Birch, Poplar, and White Oak construction, so they will last some time. I will shoot them with OD once I'm done. I also made a custom stencil for the bottom like they had for the folding field tables in WWII. I'll take them down to Plymouth to see if anyone is interesting in buying one:

timsresort
Sergeant Major of the Gee

It is. Actually I ended up testing out the bar early in its production run: 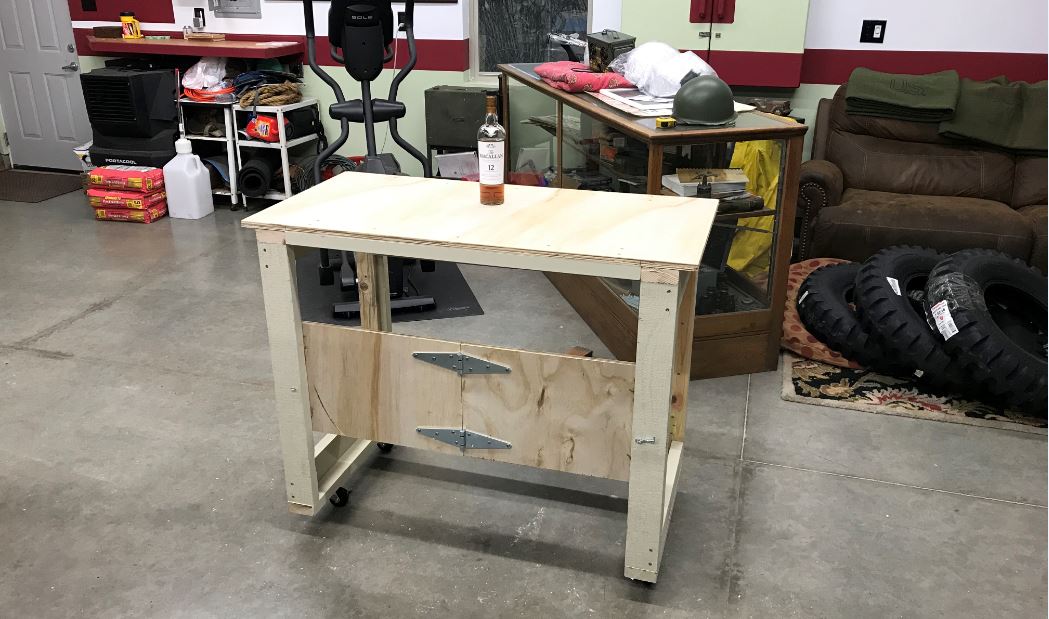 timsresort
Sergeant Major of the Gee

It is. Actually I ended up testing out the bar early in its production run:

Makes me wish we continued with our plans to attend this year!

Too many pokers in the fire for us right now to attend ANY events. Dang.

Too many pokers in the fire for us right now to attend ANY events. Dang.

This would have been a great year for you to go. Less than an hour drive from the Sacramento airport. If you change your mind, let us know.
Zeph

I won't be a Dodge Boy this year (CC not ready). This time Im a Willys Guy, but I'll still stop by to "inspect" the bar...