If you have an unrestored WWII jeep, we would like to see pictures, and hear your comments. NO EBAY or COMMERCIAL SALES.
Post Reply
154 posts

....or your superior tuning skills!
Top

great work ! i hope i had skill to make a such renovation

Thanks! I'm sure you do

It's been awhile since I last posted so I figured I'd add a few new pictures and a brief update. I honestly haven't touched the GPW since about November, as I haven't really had much time and when I have had the time the weather has been wet and cold. I will say, though, that I did briefly hop in and start the old girl this weekend and couldn't have been happier. I primed her 6-7 times, pressed the pedal a few times, full choke, and she fired up almost immediately! Is spring here yet?

Although I wasn't jeep focused this weekend, I did fortunately get the chance to spend all day on Saturday in my garage working on my MC and some garage wiring. It was about 35 degrees outside, but had the wood stove fired up and had it to a toasty 71 degrees inside - just warm enough that the jeep's canvas smell started to engulf the entire garage

A few shots I took admiring the GPW:

And lastly, installation of some new outdoor garage lighting

Man's air freshener for sure.

"None of us are as smart as all of us"

At first glance it kinda looked like Man's Best Friend was wearing VR goggles....which would explain why cat videos on You Tube are so popular.... 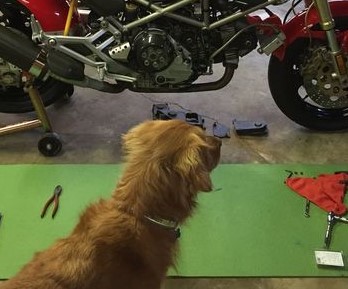 Also, very funny, Chuck! Unfortunately, this good boy is frequently beat up by cats, so the only cat videos he might watch would ones where he could learn to attempt to out smart them!

Well, life is still seeming to get in the way and my jeep time this spring has been more limited than I would like. The Reading, PA WWII Weekend is June 7, 8, and 9, though, so the old girl will be getting a good workout via the ~400 miles of driving I'll do that weekend

I did also spend a day attempting to pressure test the GPW replacement block with the distributor crack that I fixed last summer...I didn't think it would take this long to get to (

) but was able to use some scrap rubber mat and come up with a nifty little steel plate to bolt where the water pump attaches. I added a pressure gauge and a schrader valve, then installed the head with a pho-head gasket using the same rubber mat. I wasn't sure whether it would work, but actually did really well once I added air to it! Well enough, in fact, to identify another crack in the distributor well

Thanks to the suggestions of a few guys on the G, I have already bough some copper tubing that I'm going to try to use to attempt to seal that crack. Crossing my fingers it's successful, especially because I also picked up a mid-war GPW T-84 at the Aberdeen show a couple of weeks ago. I didn't rebuild the T-84 currently in my GPW, so I'm going to use this tranny as my opportunity to rebuild one on my own and I'm then planning to mate this and the replacement GPW block together once both are complete (maybe this fall?).

All I got for now...Happy Memorial Day to everyone this weekend, and thanks to all the vets out there, especially those who sacrificed!
Sean

I never got the data plate with my GPW-108552 with matching frame/motor numbers but mine was shipped 4/21 from Louisville. I do know my USA number is 20371278...which is 208 later than yours (20371070), since your original data plate is DOD 4/14/43 and based on Louisville producing something around 100 jeeps per day, I figure mine would have rolled off the line either one or two days later!

At least until I can find ONE more authenticated Louisville GPW with a DOD of 4/15 or 4/16 that has the original USA number provided by Jim Gilmore and not just another guess...I think I might go with 4/16 as the estimated DOD for mine....

Anybody out there have a GPW like that with the Gilmore info on it?????
Chuck Lutz

My numbers were provided by Jim Gilmore

Yours is also the closest I've seen to my own. Hopefully someone else chimes in with one in between your estimated DOD and my confirmed one!
Sean

The Reading, PA WWII Weekend was during the first weekend of June. As I did last year, I decided to drive my jeep from my house in Maryland to the show in Reading, with a stop at my parent's house in Lancaster, PA. It was 50 miles to my parent's house, then 30 miles each way to the show. I drove up to PA on Thursday night, then made the round trip to the show from my parent's house on both Friday and Saturday. For the first 130 miles of driving between Thursday and Friday, the GPW ran perfect! It was running smooth, idling well, and giving me no reason to think I'd run into any issues throughout the remainder of the weekend. Well, unfortunately when I pulled out of the garage on Saturday morning to head back to Reading, it all of a sudden felt like it was misfiring and ran like crap. I ended up pulling and re-gaping the plugs, checked the points, and cleaned up for rotor and distributor cap, all of which made it run better, but still not perfect. After a couple of hours fiddling with it, I got things running well enough to make the 60 mile round trip back to the show. Thanks to the issues I was having, I ended up parking for the day and didn't do much driving around the show like I normally do. After getting there I also started to walk through other items that could be causing the problem. Nothing immediately jumped out at me until I realized the heat riser valve on the manifold was frozen solid...while there was nothing I could do about it at the show, or until I got home, I figured that would be the first item I tackled in an attempt to fix my issues. So, I made the trip back to my parent's house with no issue and made the 50 trip back to Maryland on Sunday without any issue either (minus the occasional miss every few seconds).

Here's the GPW at the show...even though it ran like crap that day, it still looked good from a distance

I didn't get the chance to mess with the jeep until mid-July due to a busy 6 weeks after the show, but luckily I had a spare manifold off of the 45' replacement GPW block I'm currently repairing. As a temporary fix, until I get the other block back together, I swapped the early style manifold I was using with the late style spare manifold. Voila! After the evening in the garage (which reached 105 degrees), I was able to finish the swap and get the old girl fired up again. Honestly, it was a night and day difference! Things were smooth, it idled almost immediately after starting, and driving was perfectly smooth. It was definitely issues with the manifold which were causing my problems.

After install I also bought a vacuum gauge, as the "new" manifold has the vacuum ports. My block is definitely getting tired, as I didn't rebuild it, but the gauge showed that there is still life left in it and didn't show anything alarming about how it runs. I'm hoping to only run it the remainder of this summer until I get my other block reassembled, but it's nice to know that it would likely run for the long term if I didn't have a spare engine.

That said, the GPW replacement block that I have been "working on" for the last two years is finally fully repaired! I finished the lock-n-stitch repair on the crack above the distributor last fall, but didn't have the time through the winter to pressure test. Finally, last April, I was able to rig up a pressure testing setup to determine whether the crack was successful. Unfortunately, the pressure test identified another crack in the distributor well. After receiving some suggestions from a friendly group here on the G, I was able to (on the 3rd try) drive a 1/2" piece of Permatex coated copper pipe into the well and finally plug up my crack. I put 20psi of air in the block which only dropped 2psi over the course of 24 hours. To me that's a success, as I'll likely add block sealer to the block once I get it reassembled and running again.

Here are a few additional pictures of the pressure testing setup (I de-greased the block, too, which brought out some original Ford gray that was hiding behind dirt and OD

To finally make the fix work, I coated the inside of the well with Permatex prior to driving the pipe into the well - the majority of that was pushed out with the pipe, but I think some of it remained which is what likely plugged my hole:

Had a productive last couple of weeks. I can now add "Engine rebuild" to my jeep resume, as I got my original GPW replacement block back together this weekend and painted it a nice fresh coat of Ford Gray

Planning to move onto my tranny/transfer case rebuild next and then I'll hopefully mate the two together and install in my jeep this winter. If all goes to plan, that is

Sean, amazing work and great progress restoring the engine. Looks like it was just delivered from the factory!

Thanks, Todd! Now, fingers crossed it runs like it was just delivered from the factory