What are the 2 holes or rivets on front MBC bumper for? My bumper ist only riveted by 8 rivets to frame but I don't see any usage for these holes/rivets.
Thanks,
Lad. 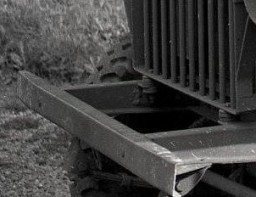 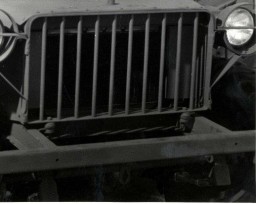 Good question. The purpose of the two holes in the BRC front bumper is a mystery.

The first 1941 BRC were shipped in March 1941 with two holes in the front bumper but no rivets (your above photo). In early April 1941 two flat head rivets were inserted to fill the two holes and this continued in production throughout 1941. However, the frame is hollow, and the rivets do not attach to anything. The rivets seem to be used for cosmetic purpose only, to fill the holes. The parts manual does not list any rivets for the holes.

Possibly the two holes were used to set the bumper into a fixture to stamp the other rivet holes in the bottom of the bumper for the gussets.

Another possibility, a design change or design error. Maybe an early design of the BRC bumper intended to fasten the bumper to the ends of the frame with two front rivets similar to the GP front bumper.

Maybe someone has another theory.