Got an M38 sitting around the shop and want to create a Coast Guard Search and Rescue jeep. Wanted the tail gate, so moved the spare tire to the passenger side rear and was thinking of a water or jerry can on the opposite side. Then some info on dual wheels got me thinking and I came up with an idea to put duals on the rear strictly for visual uniqueness or could be justified for additional traction in sand and coastal areas. Found a set of tubes that go over the rear axle nut and ride up on the tapered axle fitting and then a tension collar and flange that uses long spacer lug nuts to draw everything together. Had to have the long spacer lug nuts machined and, of course, five had to be right hand thread and five had to be left hand thread. I was hoping to be able to use this set up on a G503, but the entire rear axle set up prohibits that. On a G503, something would have to be direct bolted to the axle hubs, IMO.
So this set up and some Northern Tool fenders wil give me the look I want and they roll straight and true on smooth surfaces, I need to get the spacers hardened, but even then, I don't think I'll take this jeep off roading. Now to get the jeep running and ready for it's close up. But, my spare tire won't fit after fender installed, so it's loose the tail gate function and mount spare and jerry can on tail gate, or put spare between bumper and grill or just leave spare at home. Hood will be Coast Guard seal and red stripe, so don't want to cover it up with spare. 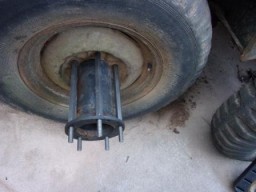 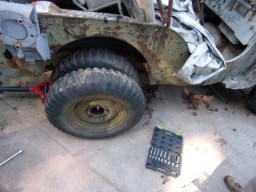 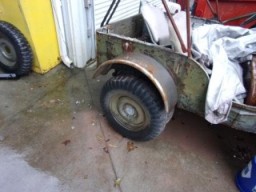 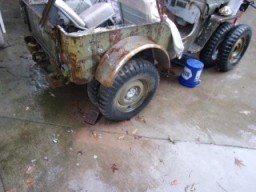 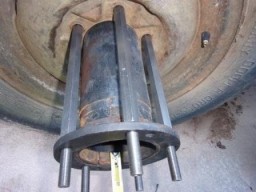 When mounting the spare tire on the passenger side --- CJ style --- the entire M38 spare tire mounting bracket isn't used, only the top half.
But even that won't fit with using your Northern Tool fenders with dually's.
Ron D
1952 M38
1951 M100
Top

A few more rainy days where I can't get out of the shop and I may cobble up a swing arm spare tire mount for the passenger door opening. Or remove the passenger seat and mount it in the tub like the M170. But I'm leaning towards leaving it at home. I've got six tires on this thing if one goes flat. It's like I'm already carrying two spares.
Top