lose my head over huey

and other stuff up in the air
Post Reply
20 posts

Thats brilliant Maverick, my dream may come true, many thanks.

Afghanistan 200,9 FOB Dwyer in the South West...Standing on the far side of the PSP (Pierced Steel Planking) laid out runway watching (USAF) Red Horse drive 2ea M35A2 Deuces across the field while a Huey and a Cobra take off in the distance...

I just imagined with a wry smile (History major) we hadn't evolved much since Vietnam...

Yes there were Blackhawks, MRAPs, Humvees, etc., but the Marines still used the aircraft, and the Redhorse used Deuces, which always seemed to run just fine in the high sand airfilter blocking environment VS the MRAPs requiring more air cleaner cleanouts, perhaps it was just because they were being used for runway work, but it was fun to see all three vintage military vehicles running around.
V/R W. Winget
Looking for 1918 Standard B 'Liberty' truck parts
Top

There is an excellent flying museum project in Hayward, CA USA. See www.hueyvets.com. A UH-1H restored like a ship in the partners' assault helicopter company in Vietnam. It's a membership-driven non-profit operation and they do proficiency flights during regular open-hangar BBQ lunches for members. The website talks about AHC history in VN. The two partners flew together in 135th AHC which was a unique unit composed initially of US Army and Royal Australian Navy personnel tasked to support ANZAC ground units in southern VN. Later they were transferred and supported ARVN and US troops to include special forces. Their slick platoons had call signs EMU - Experimental Military Unit and also happens to be the Australian flightless bird, and the gunship platoon was TAIPAN which is a deadly snake. This ship commemorates EMU-309.

Check out the About Us tab and go to Acknowledgments to learn about the partners. The History tab has a lot in it.

That's me standing second from left in the home page picture of the crew that flew aboard the USS Iowa battleship during their last public open house before being towed from Richmond, CA to LA to be a museum. A unique experience landing and taking off from the helo deck of a WWII battleship!

They always fly with doors open. 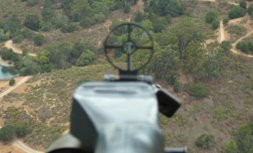 To add to John's post: The flight out of Hayward was the final time a Huey would land on a US Battleship. I was honored to be aboard also, thanks to Lee Edwards of Livermore. A proper salute also to the late Randy Parent, original crew, who flew left seat that day. Huge supporter of Hueyvets.com and a valued member of the MVCC. It's what this group is all about, living history and passing it along.
Stay well all, Eddie
V/r Eddie
1942 GPW #5739 "Sentimental Reasons"
MVPA & MVCC
Top

That flight to the Iowa was once in a lifetime experience. Glad we got to participate in it. Randy was a fantastic ( and sweet ) guy. Couldn't find a better person in 100 years. All that knew him miss him.
Top
Post Reply
20 posts