We are working on a 1942 CT-6 Light, Aircraft Towing Tug or tractor. Interestingly, the stock engines were the same 6 cylinder engines, albeit the industrial version of the Chrysler, flat head 230 cids that Dodge guys use!

I want to mark it for a US Navy tug that would have been stationed at Pax River, MD, during the 1950's and 1960's. I had an uncle who was a Navy Co-Pilot who was stationed periodically during that period, at that NAS. I would like to mark it in his honor.

I have looked all over the internet for NAV manuals or examples, but to no avail. One site in a discussion with someone else, suggested to catch up with a retired Navy Motorpool Chief. Also there seems to be a specific two digit prefix number for each type of vehicle. Anyone out there have any references on how to determine any of this?

Hi there ,
Unfortunately, I only read your request today and of course I don't know if you already had an answer.

For the Clarctor 6, the registration number is USN 11- _ _ _ _ _. The 11 stands for Tractor warehouse, diesel or gasoline-powerd.
The Clarktor 6 was used on land bases and also on aircraft carriers.
With best regards from Germany Arno 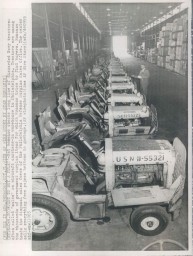 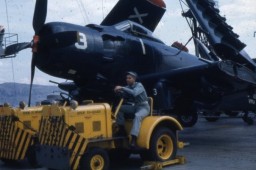