Armor, Military Vehicles, Wanted, For Sale (NO AUCTION or EBAY), and Knowledge Base
Post Reply
22 posts

What are the dimensions of the M49 gun ring i.e. the outside diameter and height of the rail please? See photo I am leaning in this direction for my Scout Car . Opinions? Ray 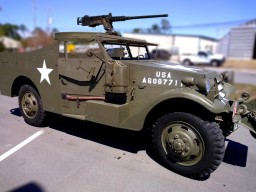 I was going to do that to mine, I have the ring, same as halftrack, but my supplier stopped making the pulpit, so I just put a skate on mine. (Still looking for a pulpit) That picture is not correct on how they did it, this was an in field mod. By the pictures I have seen and talking to a Motor Pool Sargent, the rear part of the skate rail was left on, front cut off around the second mount (would have to be determined where the perimeter rail was stopped behind the pulpit armor). They used the field modification for M2 halftrack, (there were lots of extras laying around) one picture showed the perimeter rail on the driver side going toward the back and ending just past the door. I would say to match the other side from where the pulpit armor stopped. They installed a post, or part of the perimeter rail as a post, on each side to hold the rear side of the rail in place because it had to run level and not slop off like the skate rail did. This tied the rear armor together with the front for strength. One nice thing he said was it did get rid of the head banger skate rail that was in each doorway. Not one picture has a good view but looking at them and talking to some older motor pool guys this is how they did it. I will find the post that has the pictures on it, header was something about picture of scout cars in the war. I still plan on doing this to mine when I come up with a pulpit. My skate is a repo so cutting it does not bother me.

Can't seem to get the link to post direct here but here is the link itself.
viewtopic.php?f=82&t=296730&start=105&h ... ar+picture
Copy and past in your browser, page 8 has the pictures I am referring to.

I see the link posted to just go right to the page, good. I also forgot to mention I do have an complete set of skate rail mounting brackets and a repo rear section skate rail, from doors back, that my be available to purchase if I leave my scout car wearing a complete skate rail.

I will get your the measurements of the ring tonight when I get home, mine is an original.

Thank you. I think I will make a mock up form wood and cardboard and see how it works. What is the height of the armor plate as on halftrack gun ring? Ray
Top

Don't have the pulpit armor, if I did it would be on my scout car and could get your pictures and measurements. I would suggest posting your question on the tracked index just above this one in the list. It is the same one as the halftrack uses and I bet one of the track guys can help you out. I did a little searching on the halftrack web site but did not find the measurements listed on it.

Dawgman
Sergeant Major of the Gee

Thanks for the lead. Ray
Top

Make it a dully while you are at it... 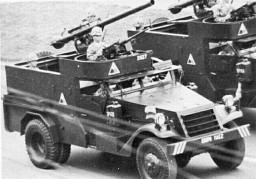 Thank you. I see the rear portion of the Skate Rail in place.
Top

Look closely! Those are Half-tracks that have been converted to all wheels! Notice the telltale shape under the rear of the door. That is the opening where the front drive sprocket lived, now plated over.