M274 Mechanical Mule Wanted, For Sale (NO AUCTION or EBAY), and Knowledge Base
Post Reply
11 posts • Page 1 of 1

Very sorry to hear of His passing. Learn a lot reading His posts.
Prayers for His Family.
Danny
Top

I am too, very sorry to learn of Charles Witt death, thank you Chuck for posting this.I learned a lot from his posts/talking to him.I was planning to pay him a visit sometime in the future too.RIP Charles.
mark
change user name to mark
Top

Very sad to hear of the passing of Charles Witt. I dealt with Charles since the late 70's. You never know how missed someone is, until they are gone and you realize how much knowledge they have taken with them. He never steered me wrong and was a fair man to do business with! Rest in Peace Charles!!
W. Roberts
MVPA 1401
Top

So sorry to hear this. He will be missed.
Top

I dealt with and met Charles. He was a nice guy with a lot of knowledge he was willing to share. RIP
RGMutchler
M274A5
M38
Top

We will all miss Charles, his knowledge, willingness to share his knowledge with everyone, help us with problem solving and just being a member of this great group. I know he willingly contributed to the WhiteWorks web site to make sure the mule community had access to as many publications as possible. One conversation I remember we had was about horsepower rating between the Mule and GenSet engines. The one great point he made was that the compression ratio is higher in the genset motor so it actually made more power than the mule engine just at higher RPM. As a past engine builder it made sense to me.... Think about it.

I will miss having conversations with Charles....
Mike White
Hayesville, NC
Top

I'll miss Charles as well. I was lucky to live less than a hour and a half from him, but whether it was a visit or a call, he was always willing to talk about Mules!

I found out about Charles around 2015 as I was preparing to rescue my 'FrankenMule' from a back yard in western North Carolina. When I towed it home that summer, I dropped by Charles' shop and he was happy to give it a thorough going-over. He recognized some of the parts and modifications as his previous handiwork, but what amazed me was his encyclopedic knowledge of just about every technical aspect of all the Mule models. 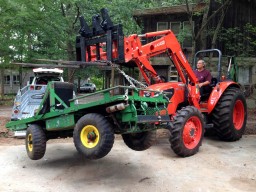 Over the next 5 years, I often called and exchanged emails with Charles, and he helped talk me through getting it running and returning it to near-military issue shape. I even brought the Frankenmule back to him in 2019 as I was preparing to prep, prime, and paint it. He gave additional advice and suggested maintenance I needed to perform to keep it running. 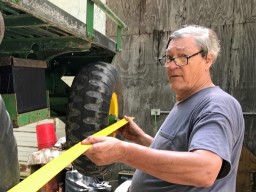 I am very sad to hear this news of his passing. The MULE world is not the same with out Charles. His wealth of technical knowledge was helpful in my projects. He was always willing to help me. He will be missed. RIP MR Charles Witt.
Top

This man was a great mule mechanic and very helpful with advice. RIP .
Top

He was a friend and advisor. I visited with him on our vacation to NC TN and GA. He let me drive the first mule I had ever seen in person! I remember the story he told me about using his mules to carry away the victims to the Tocca falls flood in the 1970s. Charles actually talked me through the rebuild of my mule transmission. I will miss his sage advise and humor
Rest in peace my friend....
Remember the word "expert".....An "EX" is a has been.... and a "SPERT" is a little drip...
Top
Post Reply
11 posts • Page 1 of 1