The Resurrection of the FrankenMule

M274 Mechanical Mule Wanted, For Sale (NO AUCTION or EBAY), and Knowledge Base
Post Reply
8 posts • Page 1 of 1

The Resurrection of the FrankenMule

"It's Alive!" That's how I feel after almost 5 years of intermittent work resurrecting the "FrankenMule', my M274A3 Mechanical Mule. I can finally declare it 'show ready', since it's now fully functional, repainted, and stenciled in Vietnam-era US Army markings.

Thanks to an offer I couldn't refuse from a family acquaintance, I rescued this tired animal in 2015 from beside a farmhouse in North Carolina, where it had been slowly corroding out in the open. I quickly dubbed it the 'FrankenMule', since on inspection it was found to be peppered with parts from various models, and it sported a huge, heavy steel C-channel frame bolted onto the front with an electric winch, and a 'gantry' assembly mounted behind the Chevy Camaro-style seat. Lots of other non-GI parts (like a baling wire throttle cable) had been used to keep it running during its lifetime. Oh, and John Deere paint covered every inch of it! 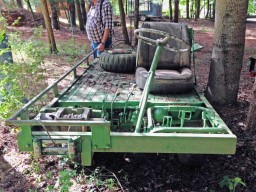 FrankenMule as found in the wild, Franklin, NC, June 2015 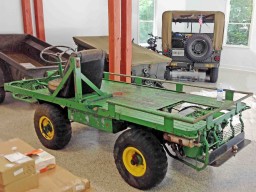 
It turns out that one of the original civilian owners of this Mule had been a log home construction company, and this mule had spent much of its life moving logs and timber beams around on job sites, so it was pretty beat up. My goal was to get it back running and restore it into parade-quality shape, so hopefully its later years would be more kind to her.

So what model did I (mostly) have? After removing the winch, C-Channel frame (did I say it was heavy?), and the gantry, I found an early, poorly-made reproduction data plate that said it was an M274A4, but it had no serial number, no registration number, and no date of delivery on it. Sadly, my careful wet sanding failed to reveal any service or unit markings, but it did seem to have Marine Corps Forest Green under the hideous John Deere layer. With help of 'Mule Whisperer' Charles Witt, we identified all the parts from different models, but with only 2 seat-back mounting holes, it was obvious that the FrankenMule had originally been an M274. A mostly-correct 2-cylinder engine with proper platform spacer blocks convinced me that the FrankenMule was in all probability an M274A3.

From the "G", I knew after I picked it up not to try to start it yet. Sure enough, after dropping the engine, I found the obligatory mouse nests in the cylinder fins, along with mouse droppings and mouse bones (a skull)! What followed was the slow process of finding what needed fixing or replacing, a steady stream of orders from John Emery and Charles Witt, and an irregular series of work sessions in my garage. I got it running in time for the 2017 Durhamtown, GA 'Steel Soldiers' Rally, but then I had to figure how to get it back into its military uniform. 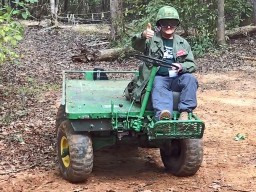 
I'd had an affinity for military vehicles since 1974 when I was a young cadet in the Civil Air Patrol. Back then, CAP sourced its planes and vehicles exclusively from military surplus, so I quickly learned the nomenclature and quirks of M37s, M38A1s, and ex-USAF flightline 'bread truck' crew vans. In fact, the first true vehicle my twin brother Alan and I ever drove was an M274A2 brought out to our winter training area in Alabama by our leader, Ron Bradford. As a Vietnam vet, his own interest in military vehicles prompted him to convince CAP to issue him a motor pool's worth of unique trucks, trailers, and gadgets, and that Mule was one of his favorites. He'd romp through the woods and cow pastures in it, and gave every cadet, including me, a chance to take it for a spin. 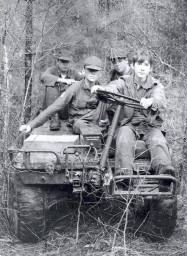 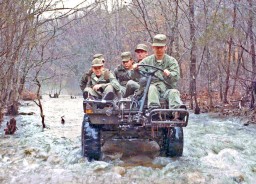 
Though Ron passed away over 30 years ago, his story would take a book to write about. But my plan on what insignia to mark on my Mule was quick and easy -- I wanted it be a tribute to him. So after lots of research and discussions with members of his old unit in Vietnam, I've done my best to give it the same type of markings his M113A1 Armored Cavalry Assault Vehicle (ACAV) 'track' would have sported when he earned the Silver Star and Purple Heart on 4 March, 1968. Ron was probably in C-Troop, 1st Squadron, 1st Cavalry Regiment, 23rd Infantry Division (AMERICAL), so that's what this mule reflects.

I've created a poster to display with the mule at events, which includes descriptions of Ron Bradford's Army service and sacrifice in Vietnam, his leadership in the CAP, and his connection to Mules. I will be honored to use this restored vehicle to keep his memory alive.

Here are some 'Glamour Pics' of the now-former 'FrankenMule' after restoration. Thanks to Bryant and Robert Brough of the Georgia MVPA for finishing the prep work, priming, painting, and leading me through the addition of Rick Larsen stencils. 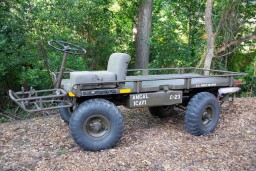 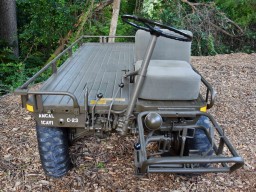 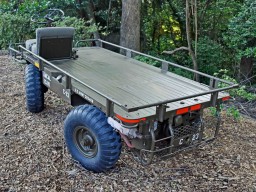 
NOTES:
- I used 'numerology', along with Chuck Watford's database of Mules, and the National Archives listing of 'Loss of Military Supplies During the Vietnam War' to pick an available serial number, registration number, and date of delivery that not only were somewhat in the proper sequence, but reflected something about Ron Bradford. For instance, the registration number "2B3468" denotes the date he earned the Silver Star and was seriously wounded -- March 4, 1968.

- I perused multiple books and websites to determine how Ron's unit marked its ACAVs, and how Army units marked their mules in Vietnam. As a tribute vehicle, I've melded what I found with instructions from the tech manuals to create a set of markings that reflect how a mule may have been marked, had it been assigned to his cavalry outfit. Since mules were unarmored, they weren't in his unit's formal Table of Organization and Equipment, but I have learned that mules were used at his unit's firebases.
'62 M422A1, SN 3741
'65 M416-B1, SN 11
'52 M100, SN 3530
'58 M274A3, SN 10965
Top

Most impressive restoration, congratulations on a rebuild job well done! Thankfully you didn't have to deal with a hacked up deck from some VW engine job.
Top

I have enjoyed looking at all of your photos of your rebuilt mule several times now and I noticed your floor. What is that floor covering, and did you cote it yourself and are you satisfied with how it holds up? Thanks for any information.
Top

Auto Shop teacher wrote: ↑
Tue Jul 21, 2020 9:14 am
I have enjoyed looking at all of your photos of your rebuilt mule several times now and I noticed your floor. What is that floor covering, and did you cote it yourself and are you satisfied with how it holds up? Thanks for any information.

It's an epoxy coating with 'chips' to make it less slippery, and to hide blemishes/dirt. Unfortunately, it also hides small parts! I keep a magnet on a stick, and sometimes have to sweep to find small dropped objects.

I had the floor epoxied as I was completing construction of the garage. No problems with the coating 'pulling up' from hot tires, which is a problem with cheaper coatings. It's very strong, and I'm happy with it. 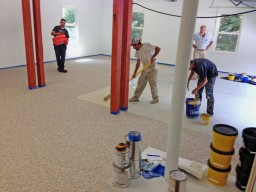 I went with the epoxy system from Home Depot up here in Canada.
I opted out of using the colour “chips” for the exact reason of camouflaging small parts and actual dirt. Prefer the clean sanitary look myself.
I did purchase the optional grit agent to add to the coating to make it non slip. It works great but also helps to stick my dogs hair Lol.
Believe the product was Rustoleum and it is a water base. Was skeptical at first as far as how it would hold up but as always it comes down to doing the prep work correctly and following the instructions. They recommended a full wash with degreaser followed by the acid etch included with the kit. I let my floor dry up for two weeks after the acid etch just to make sure. My concrete was also new and freshly poured but fully cured with over 30 days since the pour.
Here I am 6 years later and the floor still looks great with zero signs of wear or peeling
1968 M274A5 USMC 325489
1958 M274 US ARMY 2B3379
1970 M38A1 CDN3
1981 M101CDN Manac 3/4 trailer
1984 M1009 CUCV
Top
Post Reply
8 posts • Page 1 of 1