M274 Mechanical Mule Wanted, For Sale (NO AUCTION or EBAY), and Knowledge Base
Post Reply
10 posts • Page 1 of 1

A while back, we discussed the "Super Mules". I have been contacted by a new board member who actually owns one of these extremely rare vehicles.

From "U.S. Military Wheeled Vehicles", by Fred W. Crismon (page 245): "The mechanical details of all the XM443 and XM443E1 models were essentially the same: a 164 cubic inch opposed-piston, air-cooled four cycle engine which developed 72 horespower was mounted just ahead of the rear axle, and it drove all four wheels through a three-speed transmission and two-speed transfer case. The body was aluminum, while the frame assembly was steel. Unlike the unsprung M274 Mule, the XM443E1 used coil springs and independently suspended axles all around." "Two XM443E1 prototypes were built but development was stopped after extensive testing by both the Army and Marines disclosed numerous maintenance problems."

Here are a couple of photos of the manual for the "Super Mule", and Joe will post photos of the actual machine once he gets it out of storage. I've also asked him to tell us about the machine and his involvement.

Interesting Chuck, it looks like some of the electric utility carts you would see at schools, work sites, and colleges around the country.
Top

Just a FYI, my mom has had another setback with her cancer and is back in the hospital, so I am sitting with her and it will probably b e a while before I can follow up on this post. Thanks.
North Alabama
Dixie Division Military Vehicles Club
former MVPA member
Top

Sorry to hear that Chuck, you guys are in our hearts and our prayers.
Top

So sorry to hear about your mom Chuck!
Top

I had to laugh when I noticed the hubcaps (identified in the drawing) on this vehicle. With hubcaps and street tread tires, I doubt if this would be an off road mule variant.
Top

I seem to can't figure out how to post photos on this form I have started cleaning the garage a little bit I'm trying to figure out carburetor situation I figured out the tires the split rims so they can hold air I'm going to go out and buy six volt battery soon. My involvement with this machine is my dad bought it back in 1982 he was on his way home from work 1981 and seeing the military ambulance sitting at a wholesale lot took him a week to decide to buy it when he bought it sing the super mule sitting in the mud and that wholesale lot a year later the owner of the lot decided to contact my dad and told him that he was ready to sell it my dad has did some fabrication to it and cleaned it all up and it's been sitting in the garage for the last Thirty plus years until I started messing with it
Top

PLEASE send your pictures to Chuck so he can post them! I'm VERY interested is seeing one and I am sure most people here are as well.
Top

pittsjock
Sergeant Major of the Gee

Thanks for sharing - look forward to seeing the pictures.

I have a very extensive manual collection, including this: 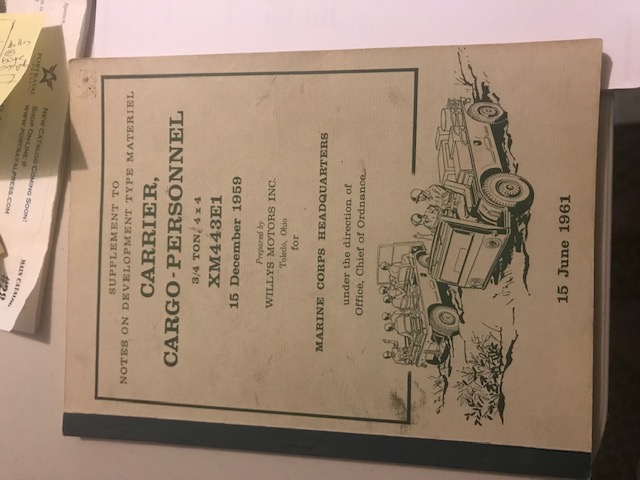