Terrific. I'll look into it, thanks.
Top

I finished the shed in the Army compound and put lighting into it tonight after placing it on the layout with all the detail stuff I'd gotten ready for it.
Now it's DONE. 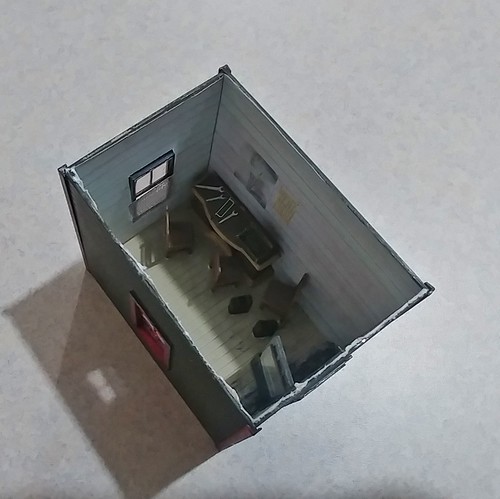 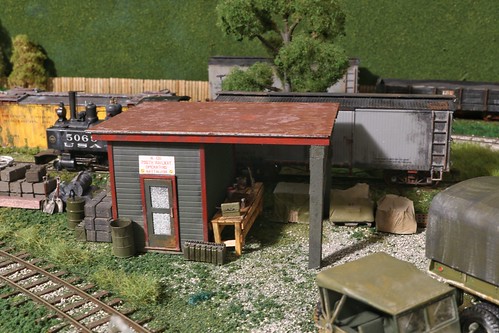 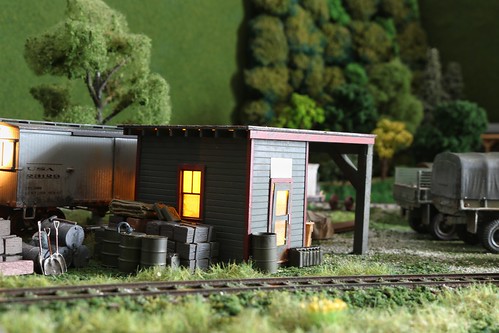 Lee, how about adding a little lunch box & thermos, somewhere?

Have you ever seen a photo of a lunchbox being used by GIs stateside in training?
I haven't.
1944 Willys MB #366014
MVPA, REMF, former US Army Captain
Top

Now you know darned well there are civilians working in these kinds of places... and they are going to have lunch boxes!
Top

Playing around with the camera again last night:

Caboose 505 trails the afternoon freight to Johnson City, Tennessee while passing through the rural community of Sadie. At the Grindstaff store, the old men ponder the "war across the water," circa 1943... 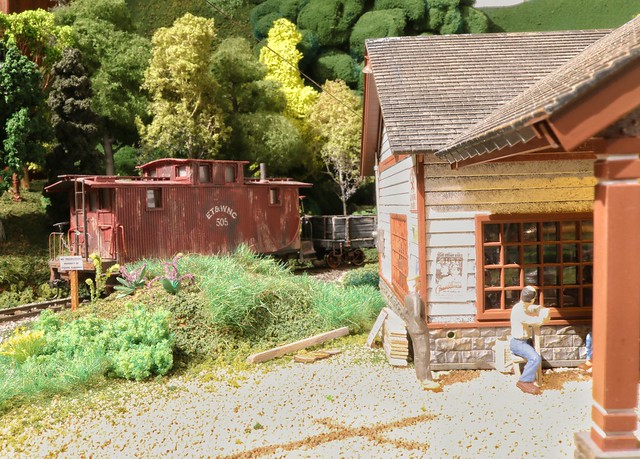 Meanwhile, the other end of the train just clears the edge of the small corn field on it's way to Winner, TN: 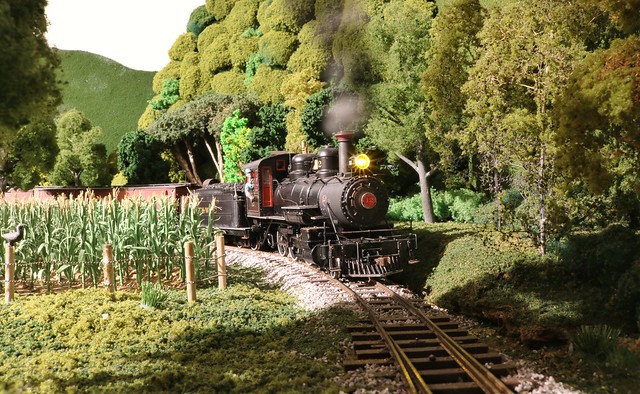 STILL no lunchboxes, eh? Those fellas must be getting pretty hungry!

You are never going to be done!

However, that is the point... you obviously love your hobby!

When I worked for the C,M,StP,and P.R.R.Co.(Milwaukee Road) we had a track side shed that contained tables for lunch(shelf for you lunch box),a toilet and sink to wash up and a desk and phone for the foreman.The time cards were kept there.Meet in the morning,get your assignments and go to work.The little work shed depicted would only act as an annex.Used after muster in the morning or at shift change.
Top

Ever since the pandemic forced us all indoors, I’ve been mostly either working from home, doing whatever house cleaning chores my wife comes up with, or working on these. 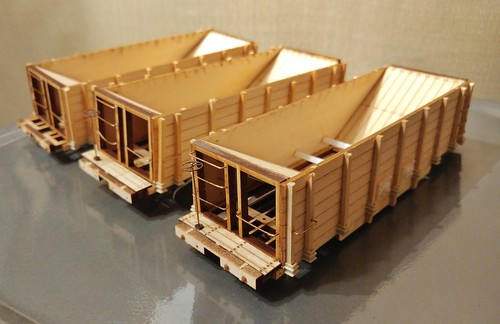 They’re laser kits made by On30IMA. They’re quite challenging to work on as a lot of it you just have to figure out on your own, so I built only one at first, to use as a guide to building the rest. I’m glad I did that. The remaining 4 I have (two more shorties and two ‘normal’ length) were done in an assembly line manner, all repetitive tasks for each type of part for each car. Now, the subassemblies are done and I need to put them all together into the shape of ET&WNC hopper cars. I’ll be happy when these are done, as I’ve always wanted some of the Tweetsie’s ubiquitous wood hoppers but before recently nobody made them in O scale. There are at least two people I know who’ll make them as 3D prints, but only in O scale. Heck, I’d have paid a premium price for these as one piece, but nobody wanted to take the money. The kits aren’t exactly cheap, but once they’re done, I think they’ll be worth it. Only one (the near on in this photo) will not be carrying a load. They need weights and there’s NO place to put them but inside without being seen. So I did the detailed interior bottoms of the one, and the rest will permanently carry coal loads.
1944 Willys MB #366014
MVPA, REMF, former US Army Captain
Top

I completed the build of the last of my five ET&WNC hopper car kits (from On30IMA) over the weekend. They weren’t exactly easy kits to make, but now that they’re done, I’m glad I went through the effort as I’ve desperately wanted representations of these hoppers ever since I started the layout.

Hopefully the decaling will go well (one character at a time, but thankfully I have horizontal boards to use as a guide) once they get into the paint shop. I am still lacking one set of trucks that I’m ordering this week but once the weather obliges (and I have some gloss black on hand to make the decal work a little easier), I’ll start the paint!
1944 Willys MB #366014
MVPA, REMF, former US Army Captain
Top