The 4X4 inch negatives were marked for July 1943 in the old, dusty box.
Sid Richardson, photographer/artist for the Elizabethton Star, was taking shots of the ET&WNC Stoney Creek branch, a rare doubleheader passing through Winner, Tennessee.
Exact date is unknown: 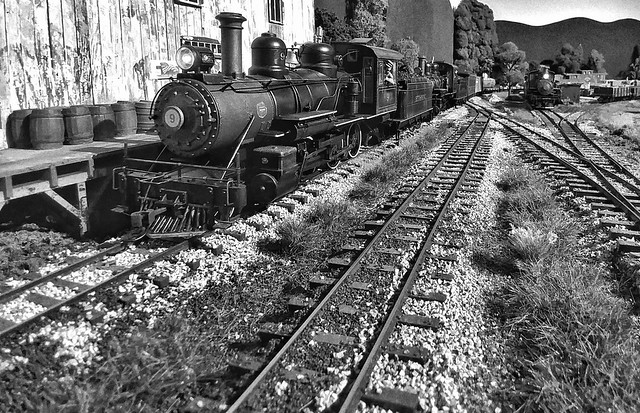 Five years to the day when the first train was run to each end of the layout, onto the powered turntables.
This is the very last of my "five years to the day" series showing the progress of my layout.
So much has changed, you can't even see the same coach is tacked onto the locomotive (which was changed from 12 to 9 after the original shot was taken)... 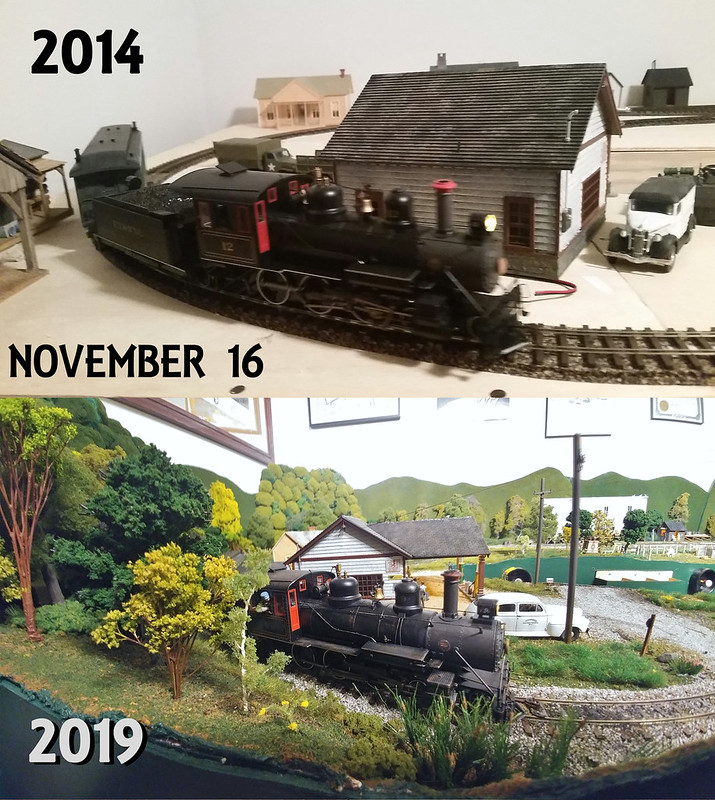 The funny thing is, you can't get the exact original shot anymore, as there are trees in the way of where the camera was in the original shot! 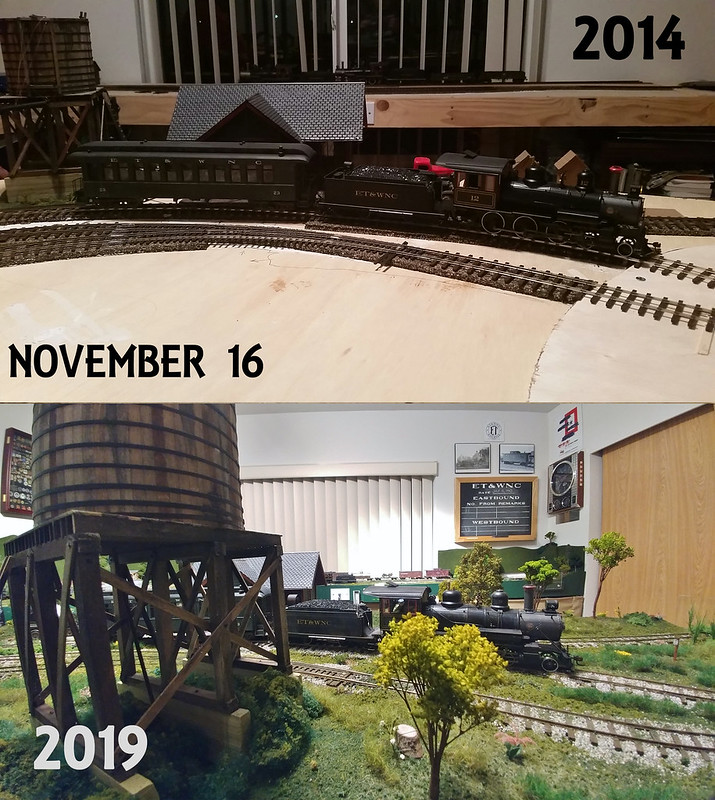 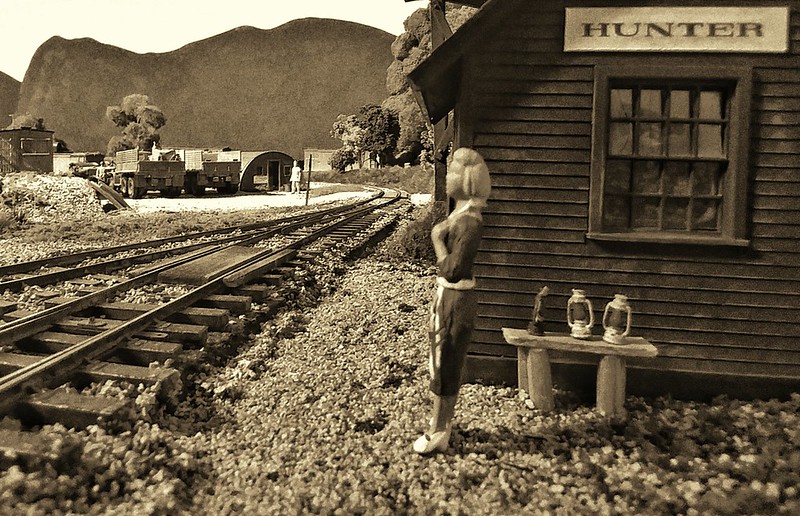 Lee, love these photos. Reminds me of some Twilight Zone episodes where people find themselves somehow transported to perceived simpler and happier times. The ability to imagine is a wonderful thing. I look forward to a time when you may create a holiday scene with cut full trees on a flatcar, essence of snow/winter etc. I much appreciate your efforts.
Best to you, Eddie
V/r Eddie
1942 GPW #5739 "Sentimental Reasons"
MVPA & MVCC
Top

Ed Roberts wrote: ↑
Thu Dec 05, 2019 1:36 pm
I look forward to a time when you may create a holiday scene with cut full trees on a flatcar, essence of snow/winter etc.

Thanks, Eddie, but that scene is likely never to come.
First, I don't model the winter.
Second, the area I model has always been horribly economically depressed, and very rural. The idea anyone would ship trees other than large ones for a lumber mill, in that place, would never happen.
My layout is hardly a perfect recreation of the area outside of Elizabethton, TN during the war (primarily because the RR I model never went up into the valley in which my layout takes place) but I try to make it as plausible a reality as I can.
Every time I do anything, I ask myself if people in that time/place would do whatever I'm thinking of.
Was 1943 a happier time? It depends. My parents didn't think so, as everyone around there was still feeling the ravages of the Great Depression or worried stiff that their boys wouldn't come home from being "across the water".
The farm house has a blue star flag in the window, something I've several times pondered making into a gold star but probably never will.
A sailor waiting at a depot has his sea bag marked for his billet on the ISS Indianapolis. Does he survive the sinking two years later?
A simpler time? People even then knew that conquering global fascism wasn't a given thing at that time, and could still remember the news of U-boats popping ships up and down the coast just east of there.
I guess I do model a more idealized version of the 40s. In my world, all the men in uniform came home in 1945, the rural electrification act came through long before it really did, and the economy didn't go back into the dumper once the shooting stopped.
1944 Willys MB #366014
MVPA, REMF, former US Army Captain
Top

Another random cell shot, of # 9 rounding the curve before crossing Stoney Creek Road at Sadie, TN: 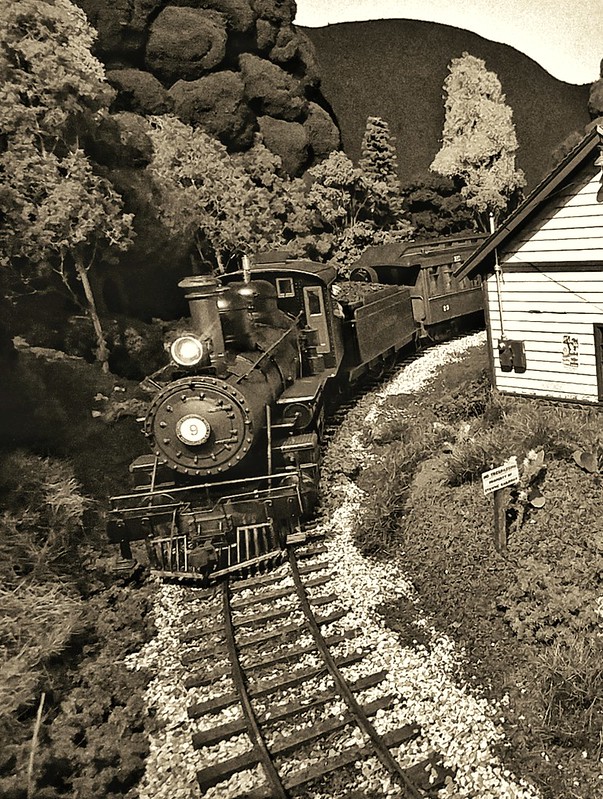 On Friday, I got a diecast/plastic 1/43 scale model I'd ordered from Estonia of all places. It's a Chevy WW2 1.5 ton truck, a model that is nor marketed anywhere in the US or Western Europe (I assume because they didn't get the rights to make it with the brand name). It wasn't cheap, but it was way cheaper than the few I've seen on eBay. I immediately stripped the Russian markings off it, put on mid-war US markings (and butchered two decals when I masked off the windows, but managed to cover that with weathering), then weathered it for a hard service life stateside. I know I weathered it a little too much, but I like how it turned out. 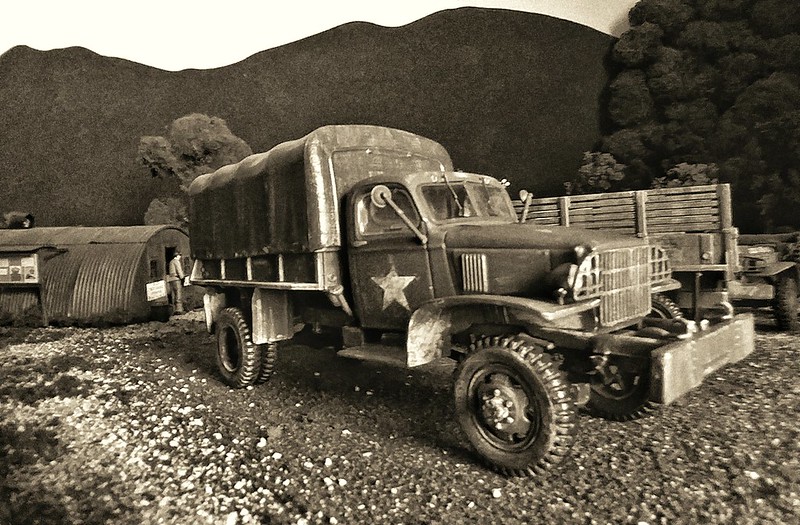 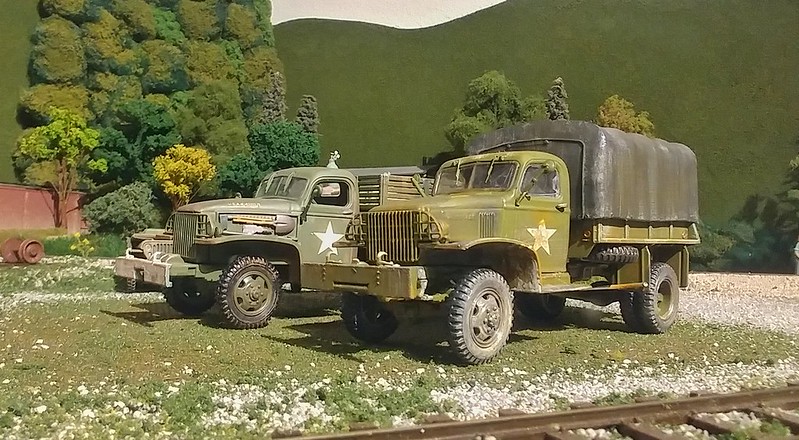 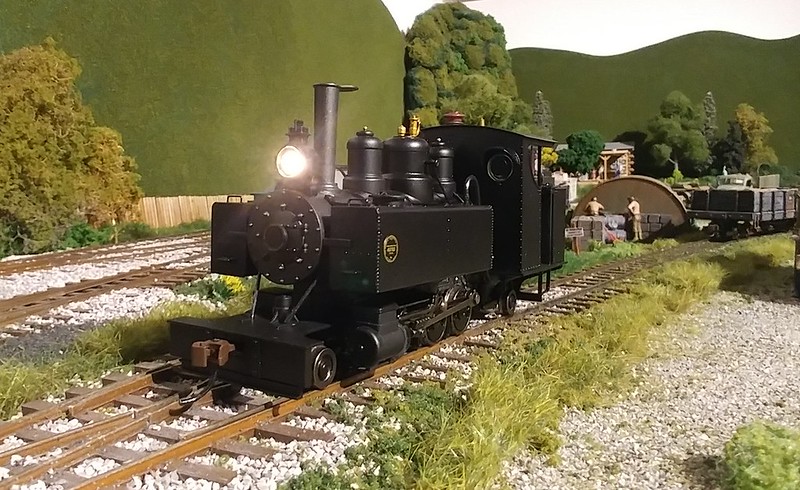 last night, I got my brand new Bachmann On30 gauge Baldwin Class 10 2-6-2T 'trench' locomotive. This one will eventually wear the markings similar to the Davenport copies wore during WW2 at Fort Benning (which were black, not OD green as the incorrectly painted one at the museum at Benning wears today).
I'll be doing a review of this for O Gauge Railroading magazine very soon. Until then, see how good the sound system is on this tiny little locomotive:

Yesterday, I did the weathering on my Army 2-6-2T and put a couple of GI figures into the cab of my Baldwin 1917 'trench' locomotive.
Notice the number plate, I created that myself on my computer. 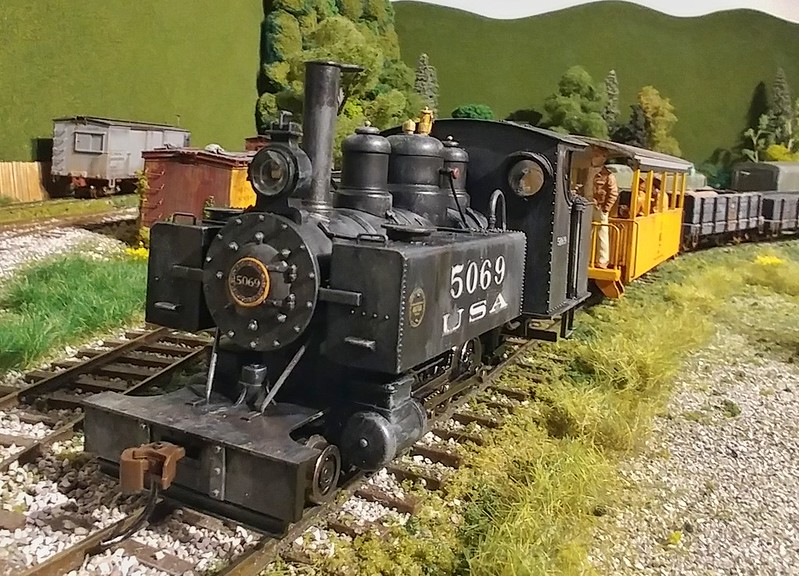 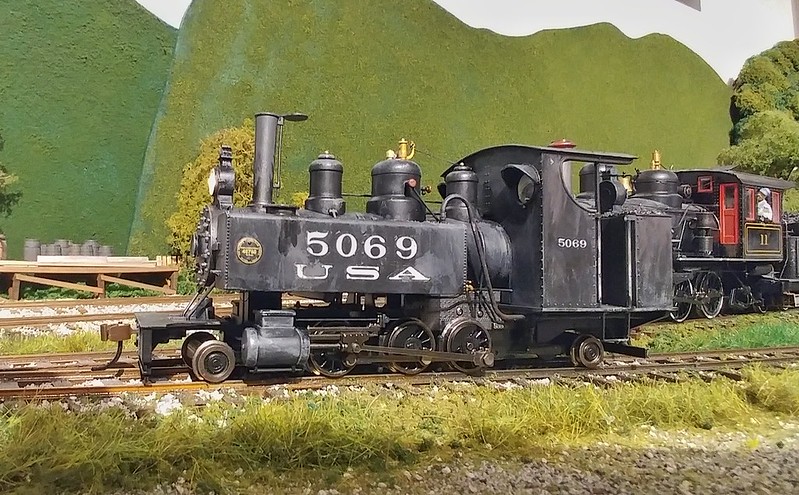 If you look along the forward part of side water tank, you can see where I tried to re-create the look of recently added H2O to the tank, spilling over the side somewhat.
So, why a road number of 5069? Well, I just turned 50 and was born in 1969. This was a delayed birthday present to myself, and 5069 was a road number carried by one of these engines as-delivered from Baldwin, so why not? If not that, it would have been 5044, for my Jeep's deliver year of 1944...
The decals were one character at a time. That took a while with magnifying tools to get that right (keep in mind, this engine was just about the size of a GMC 2.5-ton truck, so even in O scale it's very small).
A few days before, returning to Atlanta airport from visiting my parents in Florida for Christmas, I swung through Fort Benning to take several photos of their Davenport locomotive. These were made as copies of the Baldwin design and most stayed here in the states. This is one of the few left: 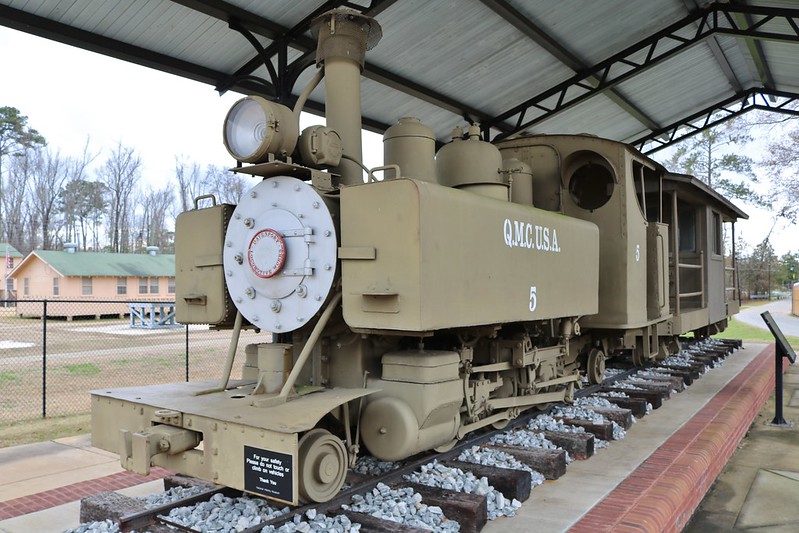 I just wish they hadn't painted it in OD green (to include the running gear!), as none were painted like this in service.
1944 Willys MB #366014
MVPA, REMF, former US Army Captain
Top

Two updates over the weekend...
First, I got some paints (mostly washes from a company called 'AK', made for military modelers), as I'd read one made to show fuel stains makes an excellent finish for greased side rods on a steam locomotive. Others were for rain streaking and other grime effects. They worked great, and was worth the long drive to a hobby shop to get them! 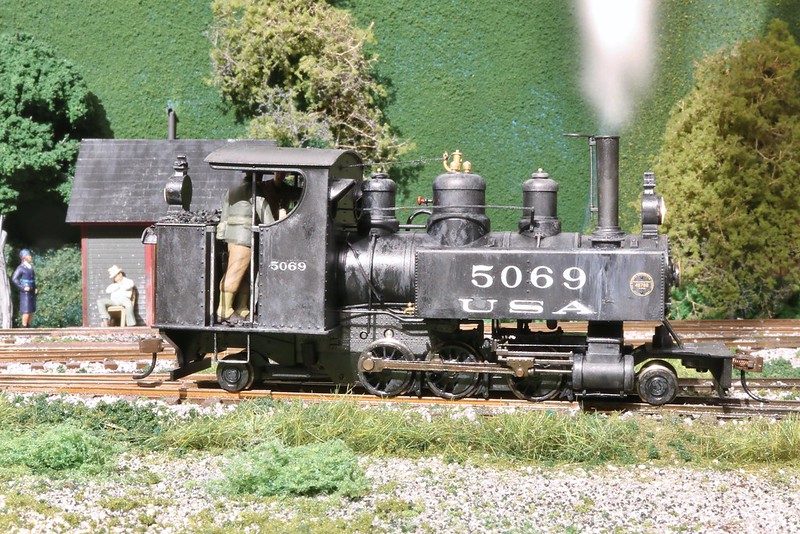 Long ago, I wanted to make a fictional insignia for the railroad operating Battalion. Last night I decided to draw it out on paper, as someone would have done in real life.
Originally, I was going to do it with a ET&WNC locomotive, but I realized that would be very complex and hard to put on an Insignia. An Army 'trench' locomotive made a lot more sense to me. I drew the stump underneath the locomotive, alluding maybe to something that it happened to one of their engines in the past. Somehow the motto 'stump jumpers' popped into my head as I was drawing it. 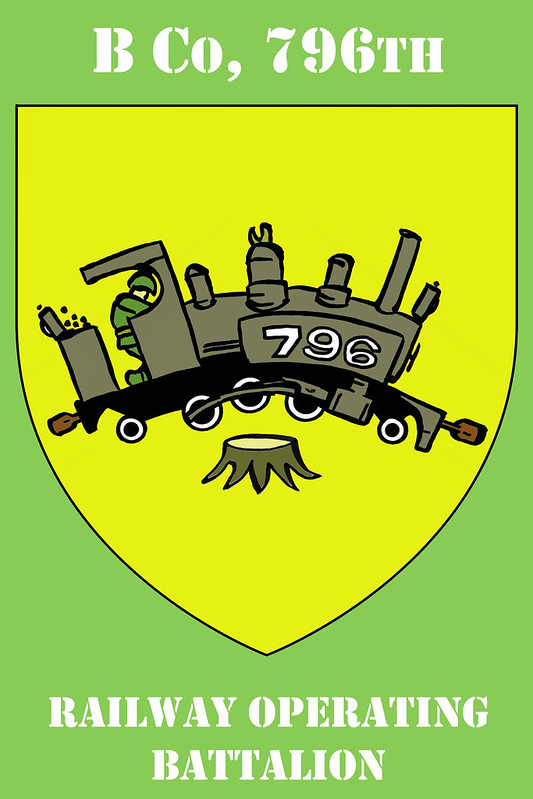 I'm going to put it on signs on the layout and paperwork. I wish I still knew someone who could make a short run of patches, as I'd love to have some made of this.
1944 Willys MB #366014
MVPA, REMF, former US Army Captain
Top

I created a RR unit sign on Photoshop, using the Insignia I just created. 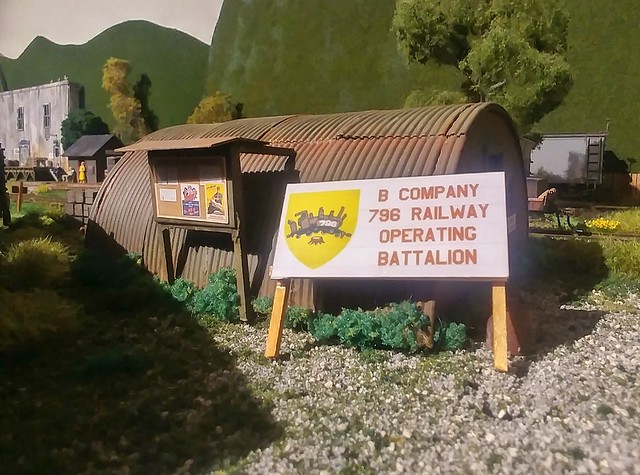 I used a background photo of boards painted in white, then ran ghost lines through the lettering and the Insignia where the board lines would be.
I think it worked pretty well, and could possibly fool the eye of anybody looking at it in person.
The back has the same white board graphic with no lettering.
One thing's for sure, it doesn't look like your normal model railroad sign where someone just printed it out on white paper. I made the frame out of scale lumber, just needs another hit of dull coat.
Now, I just need to figure out exactly where I want to place it.
1944 Willys MB #366014
MVPA, REMF, former US Army Captain
Top

My hat's off to you Lee. That's great stuff you have there.

It brings to mind an interesting experience I had many years ago. It was the 1960s and as a Cub Scout, I was participating in a newspaper drive (remember those?) and while we were canvassing a neighborhood we stopped at a big old American Four Square home. This was northern Ohio and nearly every home there has a rather extensive basement. Bellevue Ohio was definitely a railroading town. There, you were either a farmer or a railroader and it was a privilege to live there because it was a great place to grow up in the 60s. The homeowner told us he did have a lot of old newspapers that he would gladly donate but, he cautioned, it was going to take some doing on our part.

People who grew up in the depression had a tendency to be hoarders and this fellow was definitely a collector. We were ushered down into the basement where, to my amazement, there was a very extensive train set, large gauge, of the three rail variety. I don't know my model train sets well but to give you a sense of scale, the locomotives were big...something like 12" long or thereabouts. The basement was every bit as large as the house, with columns rather than walls supporting the structure so it was very open and nearly every square foot of that basement was dedicated to model railroading.

He had built the entire set on a series of connecting tables, much as most trail modelers do, with quite a few 'gopher holes' located at key points to allow for maintenance. The only two other spaces that were not train set were at the foot of the stairs and a small space around a chifforobe that was way at the other end of the basement. Naturally, that is where the newspapers were located and it was job made for kids because we made our way on hands and knees (stopping at each gopher hole to come up for another look (and some fresh air). Seeing our interest in his trains, he started several going while we did our work. The big fly in the ointment was getting the door of the chifforobe open enough to get the bulk packs of newspapers out (they were bound in thick stacks with twine) because he had built the tables very close to it and we certainly didn't want to have to make more tips on hands and knees than was necessary. Quite a job...but a worthwhile experience...and it fostered a special appreciation for model railroading that I have to this day.

TJ, that's a cool story. Some say the golden age for the hobby has long gone by. In terms of numbers of people in the hobby, I agree, but as for the stuff you can get now and the realism that you can have now as opposed to back then, I think this is the best time to be into model trains!
Last night when I checked the mail, I was very surprised to have a thick mailer from White River Publications, with whom I've bene published on a couple of their magazines in the past.
Thinking it was a mistake after seeing the "Author copies" stamp (I shrugged and thought, "well, at least it'll be something to read", I opened it and found that a photo of my layout made their narrow gauge modelling calendar for 2020!
https://shop.whiteriverproductions.com/products/ngc20
I'd had NO idea this was going to happen. 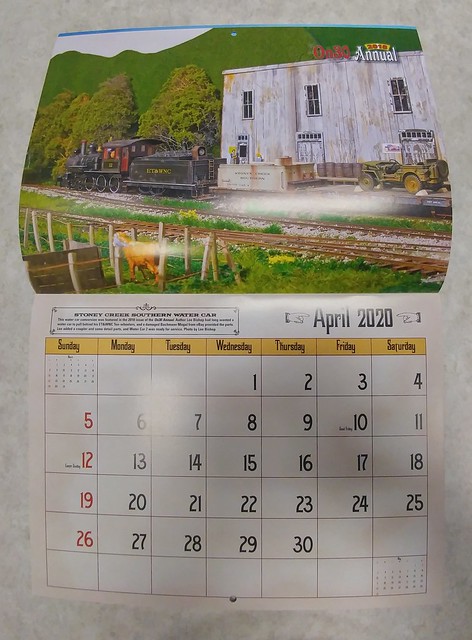