I added this to the wall over the weekend: 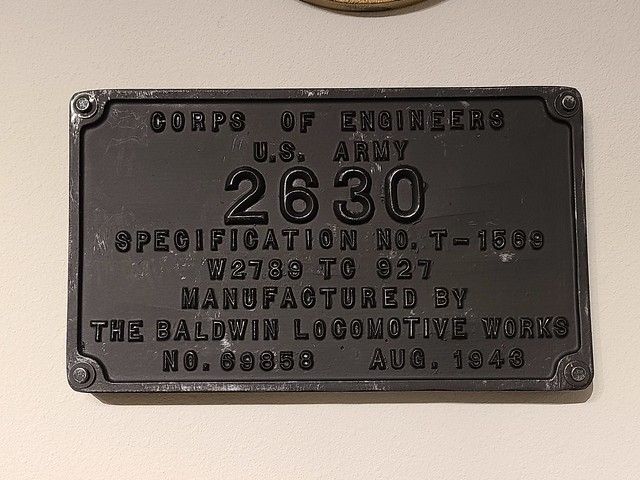 It's an aluminum casting made by the Age of Steam Roundhouse museum off their original. I drilled attachment holes and painted it to match how it'd look in service in WW2. It's hanging on the wall of the train room. I used clevis pins attached to picture wire from behind to hand it on the wall.

THEN, I put my GoPro camera down inside the Grindstaff store with the roof on and took shots with the app on my cell. They're not the best shots as the camera wasn't made for this kind of thing, but once I ran them through some filters, they have a feel like "someone with a Speed Graphic" took them in the summer of 1943. It was neat to see it from the perspective of a O scale person: 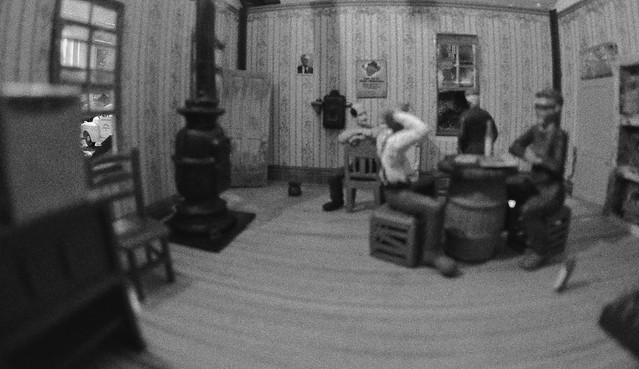 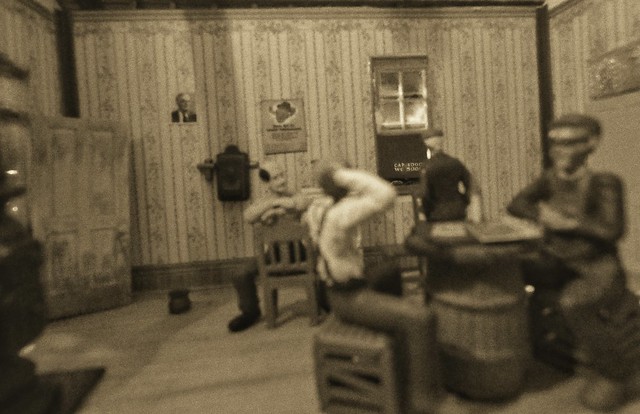 Lee, I'm curious. Do you consider yourself to be more of a diorama guy or more of a scale train guy?

Clearly, the lion's share of your work is to the matter of creating the background for your train set.
Top

Scale train guy, no question.
Think of it this way, I assume you have a GPW, so when people see it, would one ask if you're a gearhead, history buff or like to focus on the driving and operation? We all know people in the MV hobby who are one of those things and not the others.
I'm a WW2 Jeep guy, but for many reasons. I'm a living history enthusiast, former Army officer, history buff and I also just love old vehicles. There's not just the one thing, there.
Same thing with my layout. I'm an artist, history buff, train fan, and a bunch of other things. I certainly wouldn't consider myself a 'diorama guy' though, as I have never been really interested in dioramas. A model railroad is a scale representation of stuff in motion (which is why all my figures and wheeled vehicles are never modelled in any dynamic poses), and for me, it was always about building as good a representation of the dream concept I have had since I was a kid, of a specific narrow gauge railroad running where it never did, near where my parents were born and raised.
It's a 1/48 scale representation of what I dearly wish could have happened (and that I could have visited); a place I used to dream of as a kid all the time.

I mostly include that stuff as it's the primary thing that has any application here on a WW2 Jeep thread. The layout takes place during the war, so I assumed that most people could at least appreciate the details I put in for the 40s.
If I went on and on about the electrical work, the bench work, the digital controlling of the individual locomotives, my real-wood ET&WNC hopper cars, or the detail work I did on my Baldwin ten-wheelers and the box car I recently scratch built, I think many people on this forum would say, "Meh," and I wouldn't blame them for that.
1944 Willys MB #366014
MVPA, REMF, former US Army Captain
Top

Well, as you already know, a lot of us a very impressed with your passion for the details.

Looking down Stoney Creek Road on a sweltering summer's day in 1943 while waiting for the next ET&WNC train:

FYI, a photo of my layout is in the Trackside Photos section of the March 2021 Model Railroader.
I goofed when I added the caption with my cell, it auto corrected my first name to "Ashley" instead of Lee, but otherwise it's all there.
1944 Willys MB #366014
MVPA, REMF, former US Army Captain
Top

Yesterday, I realized I had the right kinds of pilots for my ten-wheelers they carried in the 30s and 40s, in the spare parts package. I hadn't known that before and was pondering scratch building the right kind of wood pilot they carried in the war and pre-war years. Clearly, I was happy I didn't have to do that, and also angry I didn't know that earlier. An hour of paint and weathering, and now ET&WNC 9, 11 and 12 all have the right pilots! 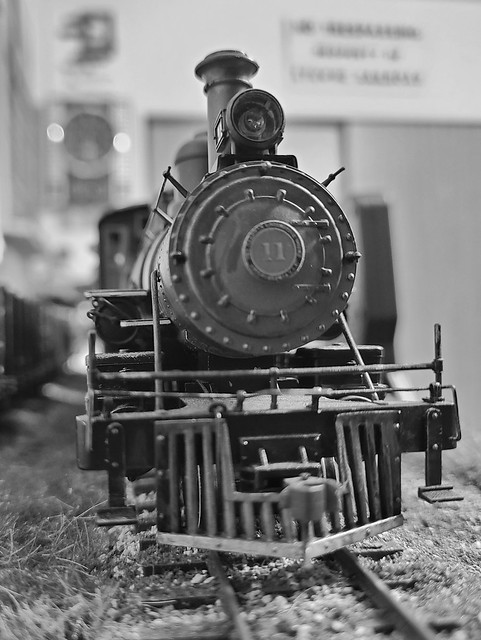 Here, you can see what they'd carried up to yesterday, boilertube pilots that were correct for the final days of the narrow gauge era on the RR: 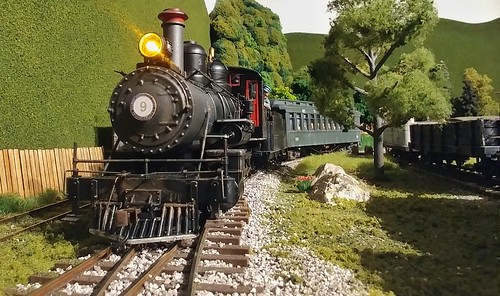 My layout is now on Trainmasters TV, if you know anyone who's a paying member:
https://trainmasters.tv/programs/mylayo ... goryId=228
1944 Willys MB #366014
MVPA, REMF, former US Army Captain
Top

My presentation to a NMRA affiliated group on Friday, was edited down to this in case you might be interested:
https://youtu.be/AztpmExwYrE
1944 Willys MB #366014
MVPA, REMF, former US Army Captain
Top

I finished a 3D print of a ET&WNC hopper car, which is coupled to a wood kit of the same type of car. These are great looking cars and I'm looking forward to ordering and completing two more of them: 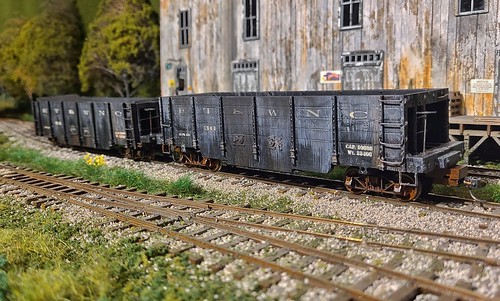 Over the weekend, I decided to do something about hopper car 44 which had issues on one turnout, it’d often ‘split the switch’. I thought it was the turnout itself (and dreading the very idea as of course it's the least accessible) but then it occurred to me that one of the axles might be out of gauge. I swapped the wheel sets on one truck and sure enough, that seems to have done it. 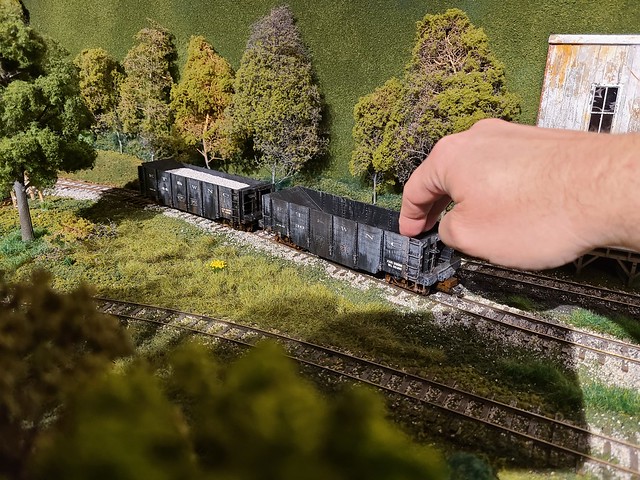 Here I am pushing it back and forth, coupled to 36 (the new 3D print from Western Rails) which sailed through with no problems.
1944 Willys MB #366014
MVPA, REMF, former US Army Captain
Top