I´m considering to swap my TH400 for a 4L80 while doing the body-off-restoration on my 1986 Humvee this summer. Yes, I know, subject beaten to death; I think I read all the posts on this subject, here and on Steelsoldiers.

However, my case is a bit different, because my 1986 HMMWV already came with a 6.5 NA (V-belt), a late NP242, the parking brake at the rear axles, and the according fuel tank.

I think I understand most of the issues involved in the swap. I also happen to have an M1045A2 slantback available for comparison. I want to do this conversion as close to military original as possible.
But I have some specific questions which my research wouldn´t clear up.

I read something about the NP242 having two different numbers of teeth in their rear output splines. Is that the difference ? The -2724 driveshaft seems to have 32 teeth. Can you advise which rear driveshaft is the right one for my NP242 ?

3. I have aquired the A2 dipstick tube, but am at a loss on which dipstick to order. I read somewhere that there are two different lengthes available, but which one is correct ?

Thanks very much in advance for your replies
Arnd

Not special, just one varity of the many versions.
Old 242 have 3 bolt tail cone. Later units have 4 bolt. Get the 4 bolt. Has higher spline count.
4l80e is about 2" longer than the th400. So shorter rear prop with slip yoke.
Longer rear half of front prop.
Change tcase cross member to allow for 2" longer snubbed location.
Ensure you have the bigger joint yoke on rear diff.
Engines dont matter on this except you require a TPS and a ESS with new engine wire harness that has these connections. Unless you are buying an ecv body harness, then the ESS wires to that.
Good luck. Easy to do on tub off frame setup.
Top

Ah, interesting. So the later NP242 with the 4-bolt-tailcone has the higher spline count (32 I think) ? That would fit my research. I have that 4-bolt NP242 on both vehicles.

I know about the length difference regarding the driveshafts; I just wanted to check NSNs before ordering shafts. My rear diff also has the larger yoke already.

I was lucky to get an M1114 harness dirt cheap, because somebody thought it a good idea to cut off the light switch plug from the $ 2,000 harness.... I got the "worthless" remains for almost nothing....

Thanks very much, Ted.
Arnd

Rear prop just needs to be a heavy variant, 12k trucks. If yours is to long, then take to a prop shop and have them cut it and re-welded then balanced. Around here it is less than $100. Or check e-ay for pros.
Top

Sorry, I have a follow-up question on this. I now aquired a 4L80E (and most other parts), but the seller only had a huge box full of different TCMs, and didn´t know which one was the matching one for my tranny.

So I´d appreciate any help in identifying my 4L80, so I can get the matching TCM.

Those are the labels on my tranny: 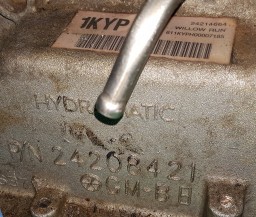 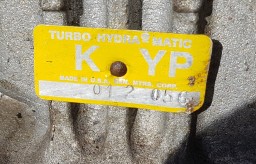 From the "4L80 troubleshooting guide" I took that this might be a 2002 tranny, but I am not entirely sure. Also, the big question is if this was on a turbo, or on an NA engine. Turbo and NA seem to need different TCMs or eproms respectively.

P.S.: I looked for my tranny P/N in this list, but it isn´t listed: 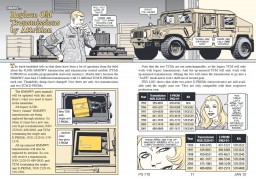 TCM 's are the same, only the eprom/program inside is different. I've never noticed a difference in versions. Shift points would be the difference perhaps. The TM show what eprom version you should use. I dont have it handy at the moment. I'll look and post later.
Top

Post a picture of the trans cooling line connections. That will help date it.

I remember someone trying different eeproms and the result was slightly different shift points. It didn't seem too critical. Just make sure the computer as a whole is the right one. It's the same computer as a 1995 or so Chevy Van. AMG just put it in an expensive waterproof box.

Most important is to make sure you have the diesel torque converter.

Also on the 242 in the 3-speed truck you should examine the front output u-joint. I believe it's a smaller size to mate with the older driveshaft.

It´s definitely a post-1997 transmission, it has the cooling lines far apart (one front, and one aft), and with quick-connect fittings. I actually didn´t take any pic of the complete transmission, but it´s a late version for sure. And it is out of a Humvee; it still had the shifter linkage at the left hand side, so I´m pretty sure it´s the diesel TC.

All the people I talked to said that most of the time, it doesn´t matter which eprom to use, but that occasionally they had TCMs/eproms that would not work on specific trannys. Since the TCM/eprom is awfully expensive overhere, I try to avoid a costly mistake.

The list from the PS magazne which I just added to my previous post also states that turbo TCMs won´t work on NA transmissions. Strangely, the 4L80 troubleshooting manual on the last page lists all kinds of part numbers for different years, but 24208421 is not among them: 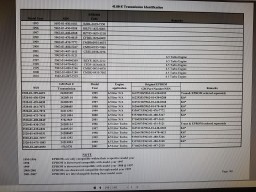 Here´s a picture of the R.H. side: 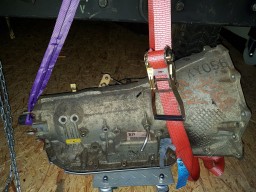 I´ve compared the schematics for an M1045A2 NA transmission with an M1114 turbo tranny. I didn´t find ANY differences. Also, the 4L80 manuals don´t show any differences in the sensors, or solenoids, etc..

So how is a turbo TCM supposed to "know" that was just mated with a NA transmission, and throw an error ?
Arnd

I have a follow-up question to this. I put in the the 4L80, and tested it with a TCM borrowed from my slantback. Everything worked fine, it shifted through all four gears, perfectly according to the book.
Now, I wanted to get a dedicated TCM for the two-door. I got a 2009 TCM-2100 BA with the complete computer (without seperate eprom).
TCM-2100 BA acording to the net is correct for 2001 and newer NA diesel.
However, after being put into the two-door, the TCM acted dead. No "trans" light when powered up, no error codes, no shifting at all (except reverse; not even 1-2).
Even with the wrong TCM, I´d expect to get at least a blinking trans light.
I rechecked wether the trans light had chosen this moment to die, and replugged the borrowed slantback TCM back in. With this, everything worked fine again, shifted through all gears, etc.. Which proves that the dead TCM gets voltage, and all the sensors, light, etc. work.

Now, I opened the dead TCM and checked for loose wiring inside. Everything looks good. However, I found this strange black thing in the box, which seems to be something cast in resin, and they used a side marker light glass as a mould (?):

The black thing is connected to pin "j" of the TCM plug, which is +12 V switched by the tranny relais. Both green wires going in and out of the "thing" have continous connection (zero ohms). There is also a black ground wire, and both +12 V wires have a resistance of about 1 ohm to ground. Anybody have any idea what this "thing" is ? Are the values correct, or could this be the culprit why the TCM acts completely dead ?
Arnd

Interesting read, did you resolve your issue.
Robert

Yes, I tried another TCM, and the tranny worked just fine with that. Seems like the first TCM I got was just dead.

I was lucky to having bought the TCM from a reputed Humvee dealer here in Germany, where I also got two of my vehicles from. He knows me, and knows that I mostly know what I´m doing, so he believed me that the first TCM he gave me was dead from the beginning, and not because I fried it. So he send me another one for free, and that solved the issue.

By the way: I later also found out about that weird black shape inside the TCM. It is briefly mentioned on page 138 of the 4L80 troubleshooting guide. It is an "EMI filter choke", so has to do with limiting electromagnetic interference. But I still find it weird that it truly seems to have been cast using a side marker light as a mould....
Arnd