New to me M998 Hmmwv questions!

New to me M998 Hmmwv questions!

So I just bought an M998... I got an offer I could not refuse on my M151 (Muttley) Jeep. Was shopping for an M715... because I love them. But they are really hard to find that aren't completely roached out!

This M998 simply looked great. And I am really happy with it! Underpowered... well, not in the torque department. It's a tank. Love it!

I know I'll have more questions.. but this is the first one. This unit is on the left fender under the hood. It gets power as soon as the switch is on. One of the lines goes to a nipple/barb on the back of the radiator.. or the shroud area. The line has been disconnected and a 'bolt' stuck in the hose.

What does it do? Is this prone to leaking/failing/etc? Why would one disconnect it?

It looks like something to do with cooling/fan. Maybe a disconnect?

I like things that work as intended. So would like to service/repair/reconnect. Any insight from the community?

Thanks and cheers! I know I'll have more questions. And will post more about my new M998 over the next few days! 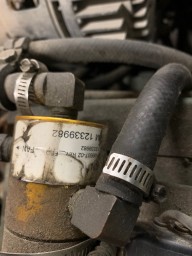 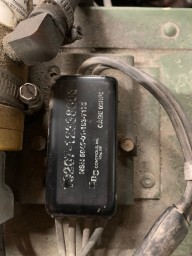 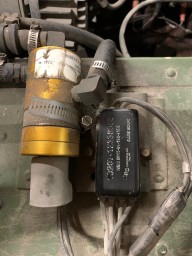 Congrates on your purchase. Best to read tech manuals. But here is a synopsis:

The gold solenoid is for deactivating the fan clutch. The black box is the tdm...time delay module that prevents solenoid from over cycling. There is a a sensor in the water cross over pipe near thermostat that activates/deactivates the power to the tdm and solenoid. The hose to shroud passes through a bulkhead connector and then via another hose to fan clutch.

Best to have it work so you don't loose hp by having fan locked on.

The most common problem is the tdm. Then the sensor. Then the solenoid.
Top

Maybe hook it back up and see if there is a leak somewhere on the disconnected part. They could have just unplugged the plug instead of going thru all that trouble if it ws something else.

This is one of the circuits in the HMMWV that is probably the most misunderstad because it works backwards from what your common sense tells you. The gold colored valve is referred to as the Kysor-Cadillac valve and when the engine is cool it is powered all the time to pass power steering fluid to the clutch on the front of the fan. This in itself is an oxymoron because the power steering fluid used is actually Dexron ATF (yes really!). This disengages the fan and allows the engine to come up to operating temperature. When the sensor in the crossover manifols detects the engine has reached ~230 degrees the solenoid de-energizes and this allows the fan clutch to engage, cooling the engine down to around 190 degrees and then the cycle starts all over again.

The Time Delay Module (TDM) passes the power to the Kysor-Cadillac valve when the truck is turned on. After the engine reaches operating temperature if you momentarily floor the accelerator pedal it sends a signal to the TDM to disengage the fan for about 20 seconds. This is done so the fan isn't powered when the truck enters the water during fording operations. If the fan was powered the blades tend to snap off from the resistance of the water.

The TDMs are a common failure item and the general "fix" is to disconnect the 4 pin connector on it and this causes the fan to run all the time to cool the engine. When the fan is running it sounds like you have a 747 in the engine compartment but other than losing approximately 10 horsepower in a pathetically underpowered truck it won't do any harm to the engine, only your top speed!

With the line from the Cadillac valve disconnected you can test the fan clutch operation by blowing ~90 psi air into it. When you do this you should see the fan move forward and backwards about 1/4". Beware of fluid blowing out of the hose if you release pressure too quickly.

Very thorough description and I will get a manual!

Belay that... just ordered a manual. Got a hardcopy. I hate getting greasy fingerprints on a laptop... and it's way easier to sit on an engine bay with a paper copy!

There's certainly a place for both the electronic and hard copy versions of the manual. I was lucky early on with mine. The local Marine Corps reserve unit here in San Jose had mountains of manual that they were getting ready to toss in the dumpster and a friend called me and asked if I wanted any. I must have brought home a couple hundred pounds of manuals that day. I've given most of them away but have a set in their binders on the shelf to reference when I need them.
Kurt Lesser
US Navy, 1969-1975
M996A1 Ambulance w/M101A3 Trailer
M274A2 Mule
M151A1 Mutt w/M416B1 Trailer
M890 Crew cab
Top

That same thing happened to me when I got my Mutt... HS friend is CSM at our local air guard. They were renovating their hangers and offices prior to getting in the F35's. And asked me if I wanted all their FM/TM stuff for vehicles and older weapons... or it was going in a dumpster.

I got a pickup load of the stuff. Everything ever published for the M151. 715, Blazers... you name it. I donated most of it to our local MVPA chapter which found homes and raised some funds off it. I think they asked members for a $10 a manual donation... and lots gave more than that. Kept a ton of weapons manuals going all the way back into the 1950's (1919's anyone?) and Mutt manuals.

Alas, no HMMWV or FMTV stuff. That was all current.

Guard bases are great places to get literature! Esp if the CSM was in your HS class