Hiya. This is my 1988 Mitsubishi J23GN. I got this from a private owner here in the Philippines, who got it off his dad, who had restored it. This one served in the JGSDF (Japan Ground Self-Defense Force) from time of delivery in 1988 until it was retired (along with a flock of these units) in around 2015. It was sold at auction in Japan and imported into the Philippines around 2016. It was converted to LHD at time of restoration, as it's not permitted to operate RHD vehicles here. It has the original engine and transmission, unlike many which were converted to other diesel engines from trucks, along with their transmission and RWD. It was obviously well cared-for in the Japanese military, as you'd expect, as all the mechanical stuff was in good shape, filters were new etc. This is how it looked when I took delivery. 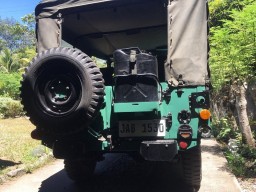 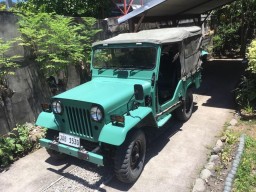 There were a few rusty spots, which the seller was very honest about before I even went to see the vehicle. 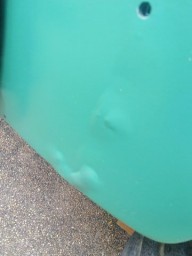 I was able to source and re-fit some of the missing original equipment, like the blackout lights, reversing lamp, front fog lamp, handbrake lever and cable, speedo cable and tail light lenses. Original equipment on this GN model would have also included an anti-tank guided missile system, but sadly I wasn't able to source one. I did scrounge up some WARN manual hubs for the Dana 30 front axle and added to the non-original parts list with those. Some came with Aisin locking hubs but they are scarce here.

Last year the Bridgestone and Yokohama 7.00-15 NDT tires were finally too worn for safe use and I found that due to the lockdowns, no replacements were available. So, I was forced to fit modern radial tires, since the only bias-ply tires available in that size were light truck load range and usually 12PR, which would be really stiff and uncomfortable on such a light vehicle. Now the jeep wears MT radials in 30x9.5R15, and that required new, wider wheels. With the odometer functioning again I can carry out routine maintenance without the guesswork. The jeep is really reliable, starts easily, runs like a top and gets great fuel mileage. I am averaging 8.5l/100km, which is about 26mpg. We camp out of the back of the jeep a lot and try to explore the more remote areas of our island, as lockdowns and the security situation allows.

After a year of use and living near the beach, the rust that I knew about needed to be taken care of, and some I didn't know about started to appear. That started a round of cutting out rotted metal, welding new sheet metal in, priming, filling and painting. I'm sure you're all well aware of the dig-find horrors-repair-dig cycle and the repairs were a bit more extensive than expected, but the result is this attempt at the camo scheme found on the J23SR of the same era: 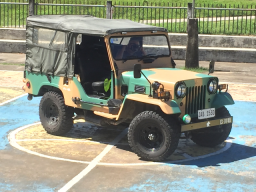 That is cool to see the Mitsubishi Jeep. Looks good.
I know you will enjoy that Jeep and the history it represents.

Pretty neat to see that.

Great Looking!! Hope you have lots of fun with it!!