Based on the discussion in the thread here: http://forums.g503.com/viewtopic.php?f=48&t=291261 about production dates of FSN marked tools, I put together this rudimentary spreadsheet. 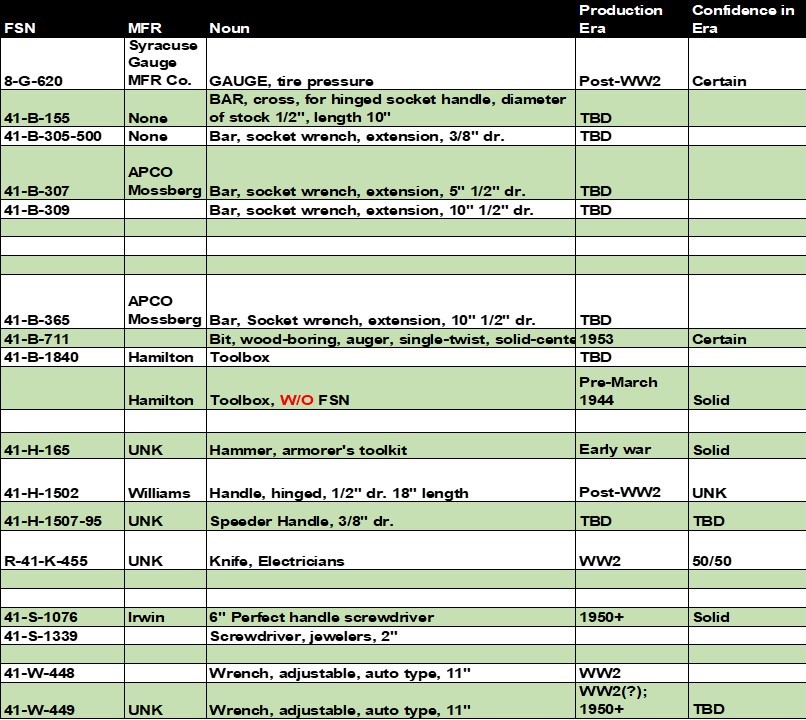 1) others' insight and suggestions about what else needs to be tracked on this document (entries across the top) about these tools
2) recommendations on tools to be added to the spreadsheet (hopefully with links or photos!). Post here on the thread, or PM me, either way.

I know that I've been bitten on the 41-S-1076 screwdrivers. I'm thinking that if we can tighten down a format, it'll then be worth scouring the G and other sources for info on tools marked with FSN, and then trying to figure out their production dates.

As you can see from the formatting of the pic attached to this message, I'm still learning to get slides into .jpg format so they can be posted. Thanks to Wingnutt for the quick tutorial on how to do that!

Rudimentary or not, I'm just glad somebody else is a "chart guy"!

Because I needed another chart to maintain like I need another hole in my headers!

Figuring out the production dates is probably a holy grail. Just having a single thread where we can park all the examples (rather than hunt and pecking for them through the search engine) and discuss them as a subject (rather than the tool itself), and where YOU can add them to YOUR spreadsheet (dang it feels good just saying that...) is a big plus.

Thanks for taking this on.
TEMPORARY DUTY
Top

Here's an image of a Hamilton Metal Products 41-B-1840 FSN marked box. 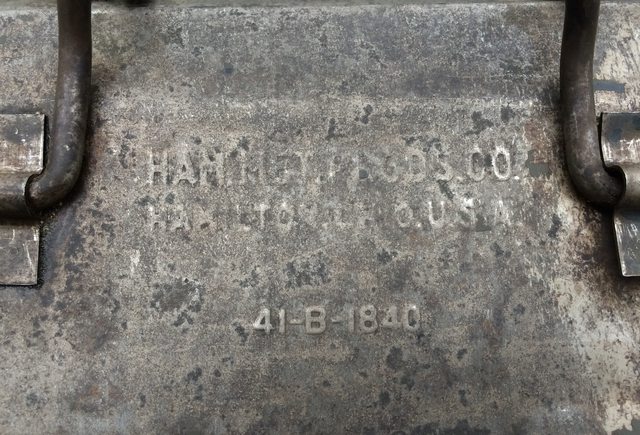 Here's a NOS box of Arcturus wrenches. Presumably marked (like the others) on the shank with the FSNs 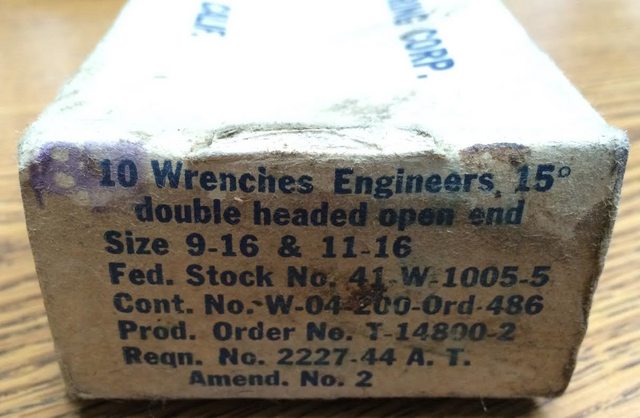 I don't have any, but there's an ignition wrench set out there, stamped with the FSN...

Williams and APCO Mossberg seemed to like to stamp the FSN on hand tools. I don't have any examples to share.

As we dive into this deeper, I'm thinking you may need to modify the column headings. Or be prepared to use question marks in entries or less definitive language. Or multiple rows for the same tool presenting different findings and conclusions. Bottom line is I KNOW we will NOT have consensus on "ERA" for lots of examples. And, it's not necessary to have consensus. The importance is having a place to capture all of the examples and the arguments and evidence either way (wartime, not wartime, early war, late war, post-war, etc), again, so we don't have to go fishing in other topical threads.
TEMPORARY DUTY
Top


mudbox wrote:Here's a NOS box of Arcturus wrenches. Presumably marked (like the others) on the shank with the FSNs

I may have already done this, but I will look up the contract number in the WPB Major War Supply Contracts reference.


mudbox wrote:I don't have any, but there's an ignition wrench set out there, stamped with the FSN...

I have a few that I can snap later, but Greg Hines has a full set on the 41-W-900 thread. Cliff has a near- or complete set. Or Steve can just post his. I know he has a few in one of the most authentic mixed sets I have ever seen!

mudbox wrote:Williams and APCO Mossberg seemed to like to stamp the FSN on hand tools. I don't have any examples to share.

Thanks for the prompt. I have a Williams hinge handle and a pair of GMTK Mossberg extensions. Here they are, along with an unbranded 3/8-inch drive speeder.

Here’s a zoom on the FSNs:

I am convinced the speeder is wartime. If we could identify the mfgr, it might help date it, but it's bare steel and therefore most likely wartime in my opinion.

The FSN actually helped me ID the Williams hinged handle, which as you can see, is missing the business end. Someone cut it off, I am guessing after it was no longer functional for whatever reason (e.g., broken). To be objective, I am not certain about the Williams being wartime. It doesn’t have the script underline logo or the MADE < W > USA logo. We do see that blocky WILLIAMS logo on things, but typically not on wartime Superrench pieces. Also, note how the stamping is a lot crisper than the other stampings (Mossberg extensions and unknown speeder). So I'm on fence on that one. And it could help in the long run with comparisons to other stampings.

The extensions with the Mossberg <M> logo to the left of the FSNs have traces of cadmium plating and crude hand forged heads. I don't know if they were still doing that late war, but I would suspect early war.

To be objective, an argument to the contrary holds that a pair of IRWIN screwdrivers with the FSN stamped on the shank and "USAAF" stamped in the wooden handle are wartime (on the idea that the USAAF was defunct in 1947).

As in all cases, collectors can decided for themselves.
TEMPORARY DUTY
Top

Thanks to you both for your help in getting this going. As you've both pointed out, there's tons of DATA here on the G, trying to get it into useful information is the point I was trying to accomplish by starting this thread. I'm hoping that some more long-term collectors will contribute tools to be listed, as well.

I'll email you both the current status of the spreadsheet, in an effort to keep the "sausage making" (messy process) behind the scenes...I've made some changes as suggested above. I can see the spreadsheet rapidly becoming multiple pages in length, depending on how fast folks contribute FSN marked tools to be listed. Greg, your point about likely never reaching consensus on some of the production dates is a good one, which I didn't realize until I started finding some of these posts across the G.


mudbox wrote:I don't have any, but there's an ignition wrench set out there, stamped with the FSN...

wingnutt wrote:I have a few that I can snap later, but Greg Hines has a full set on the 41-W-900 thread. Cliff has a near- or complete set. Or Steve can just post his. I know he has a few in one of the most authentic mixed sets I have ever seen!

Greg, do you mean these? 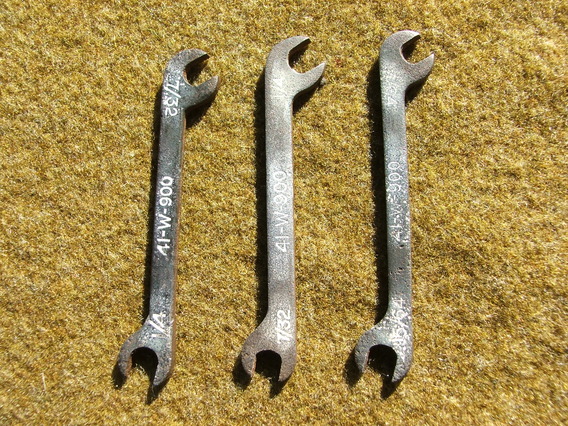 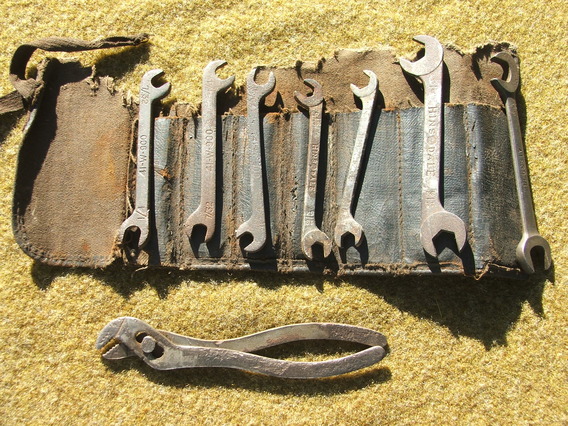 The ignition duty wrenches may be a revealing case study. They were not specified by individual wrench in a GMTK SNL until April 1945, and, consequently, that's the first time the FSN's for them (41-W-1468-3xx) show up in an SNL. That doesn't mean they didn't each have their own FSN before that, but it is interesting that they were specified only by set (41-W-900) until then, that the only examples we find each bear the set FSN, and that no examples with an individual wrench FSN has been found. Based on all that, it's hard to not reach one possible conclusion, tentatively, that the 41-W-900 stamped ignition wrenches are early to mid war, not late war. On the other hand, the Army may have always considered the set number was good enough. And in the KW era, they weren't marked with the 11-digit FSN, as far as I know, only the pouch was, with the set number.
TEMPORARY DUTY
Top

A couple pieces from today.

Here are some pictures of FSN marked tools that I have or have had.
-Don 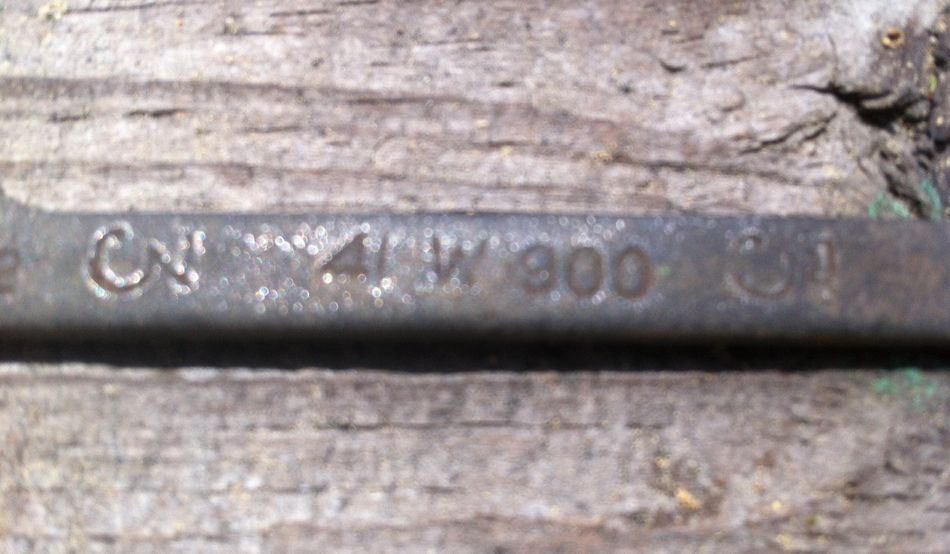 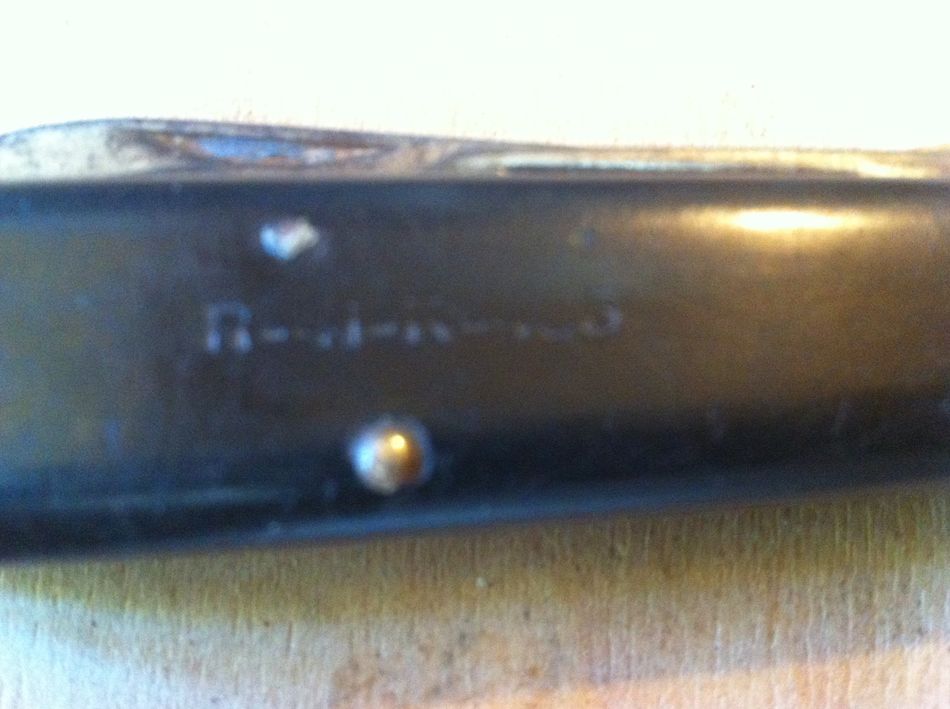 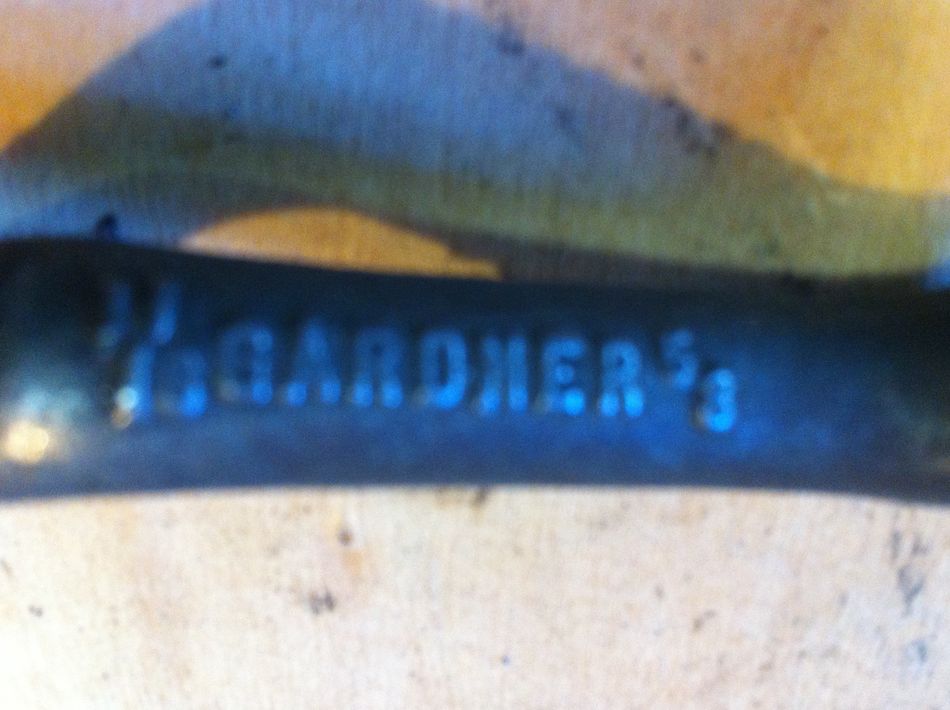 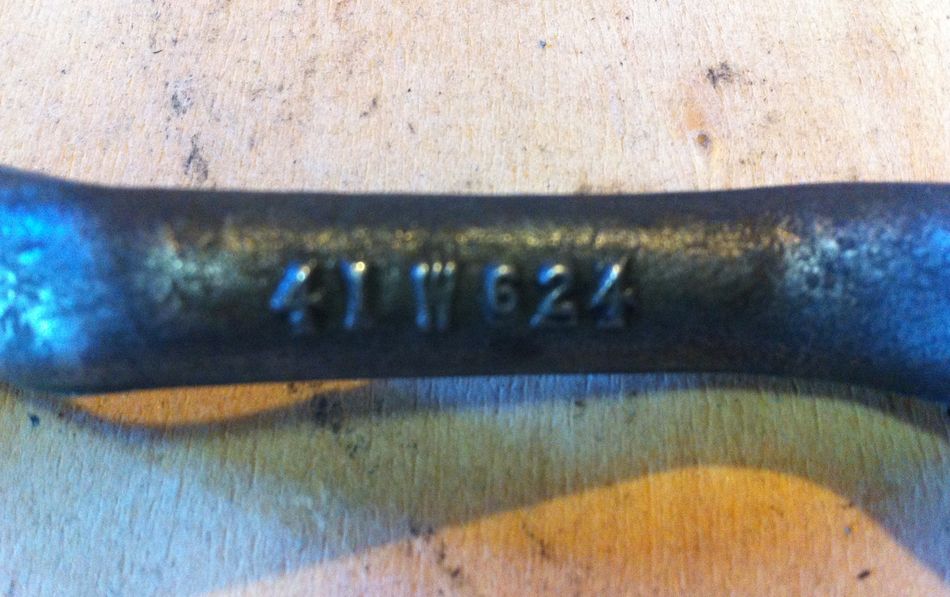 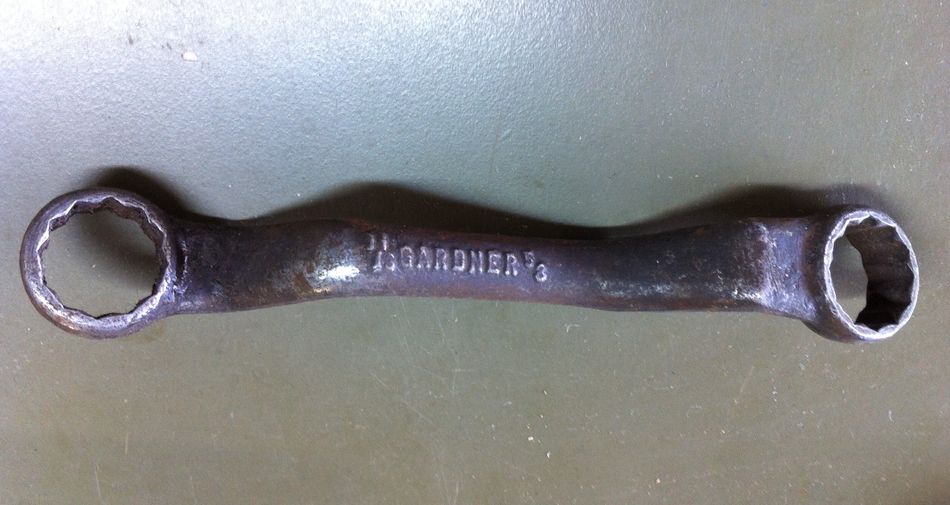 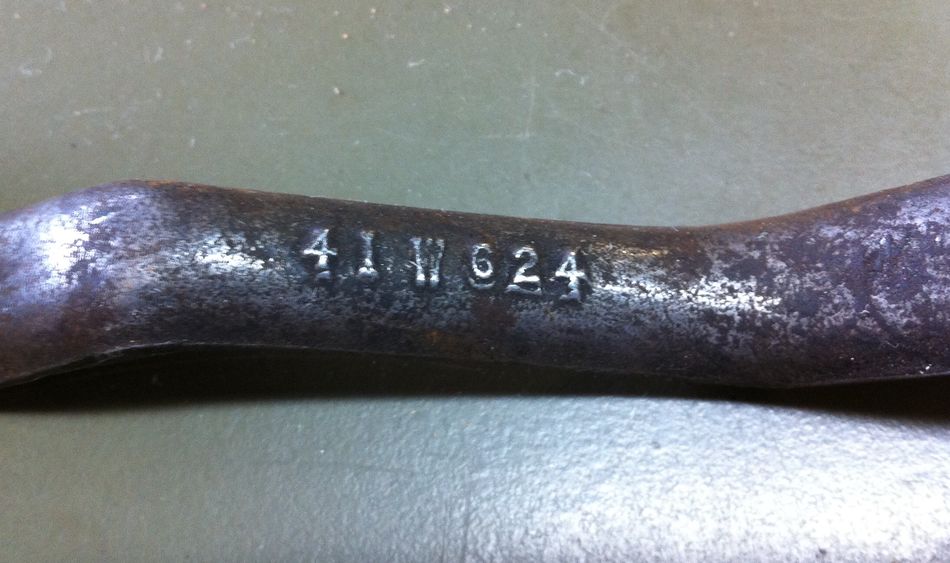 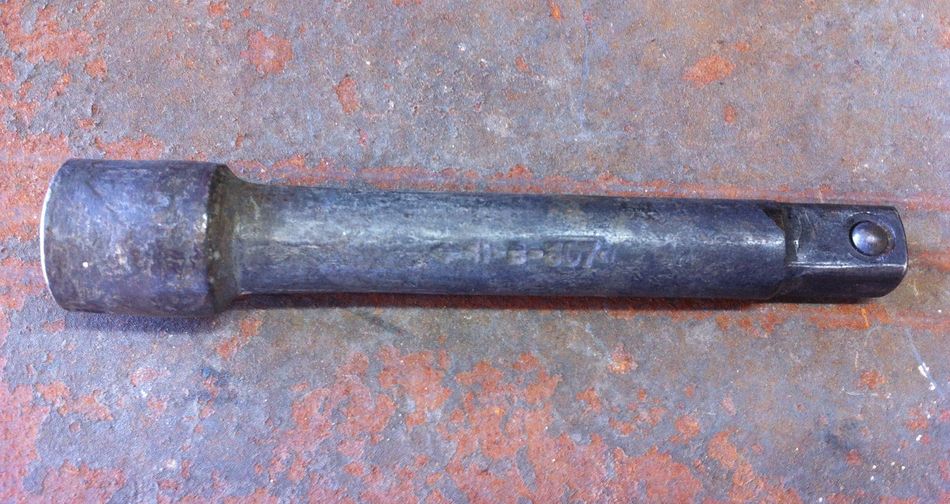 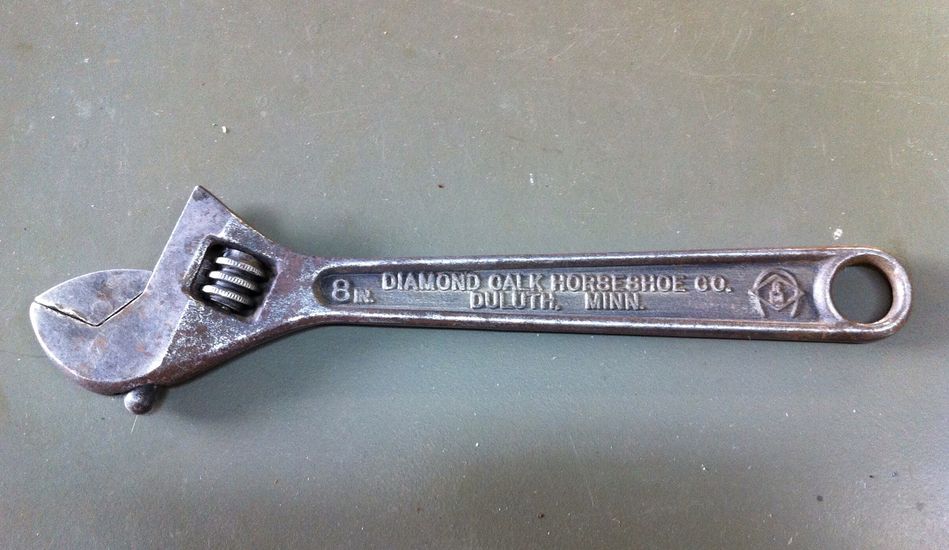 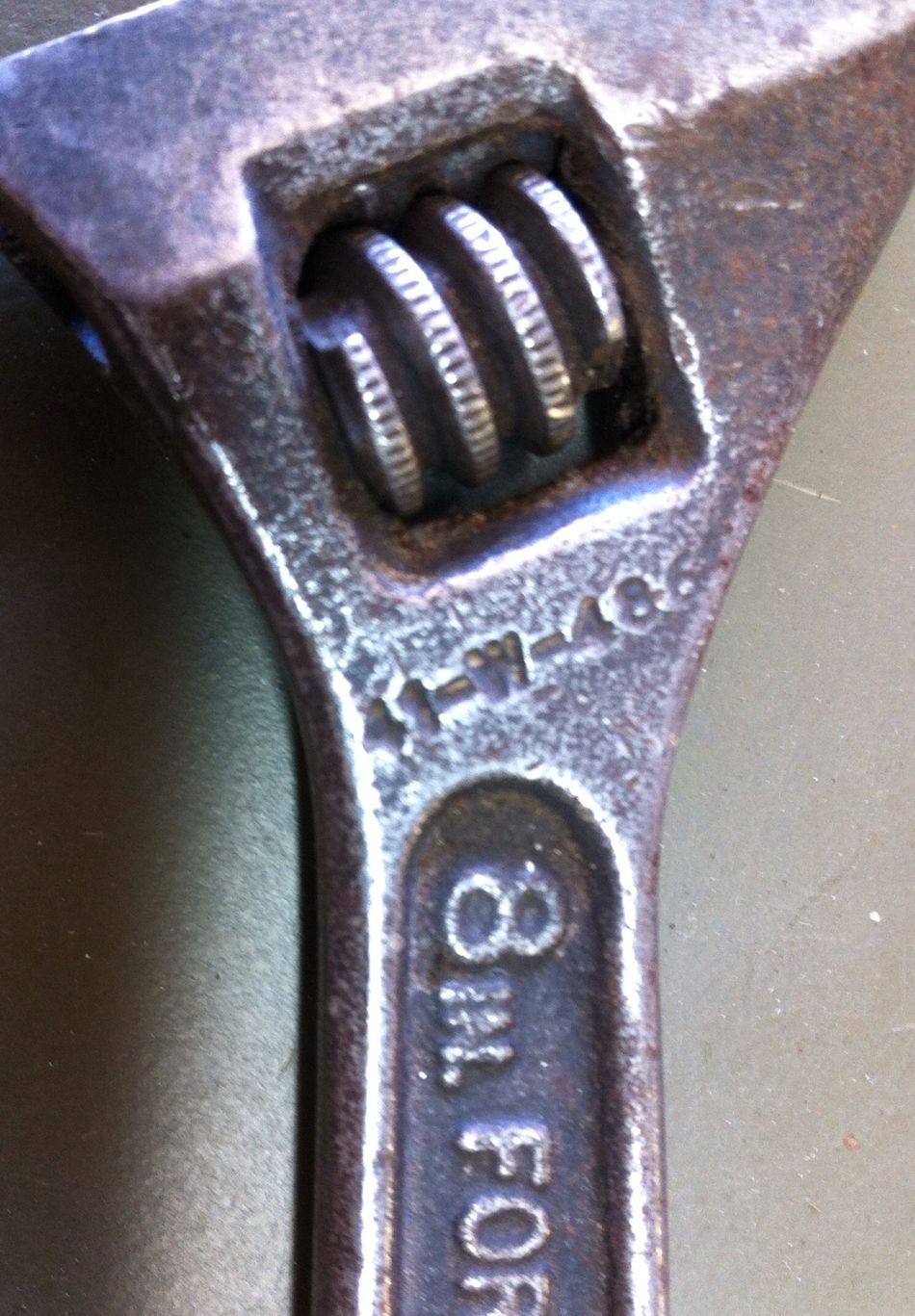 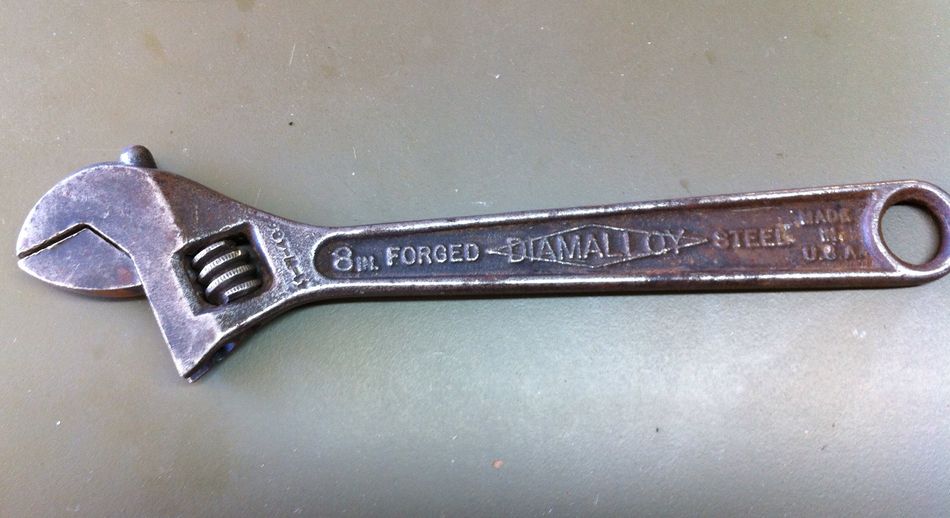 We might be able to make some hay with this one...!

Please post close-ups of the entire extension (not just the marking), the head, and the drive end.
TEMPORARY DUTY
Top

If you're going to post examples, please describe the tool and transcribe the FSN. Neither the tool or the number is as obvious as you may think from the photo you are posting.

I have two of those, one of them posted above (and a second is in my last flea market haul). Both are APCO Mossberg, identified by the <M> logo. I see that yours is caked in cosmo, but does it have the <M> logo? I am guessing so, as the construction and the font on that FSN stamp is identical to my examples. Please confirm.
TEMPORARY DUTY
Top
Post Reply
124 posts