Great! Thanks a lot guys. Here I was happily filling up a GMTK for use at reenactments with my small field motorpool setup. I've been using a post war field desk as my catch-all. But now I know I need one of these cabinets. Just when a guy thinks he's getting ahead in this world, he finds some new quest item.

If anybody is in the market, here's a slightly different variant for sale on the auction site, located in Lebanon, PA:
https://www.ebay.com/itm/Vintage-Indust ... SwImRYFpEV

Usual caveats - no connection to the sale. Plus, look closely at the color of the cabinet, it's the usual GI OD, not grey. Seller must have had issues with the lighting. 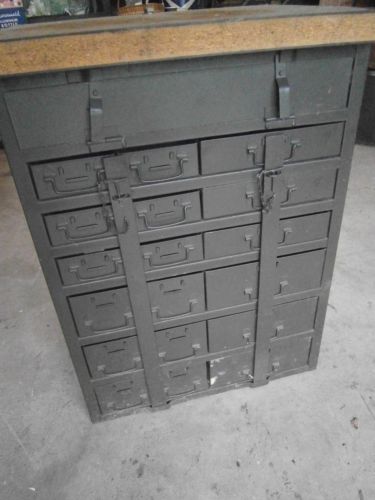 So I just acquired two of these...

They are a couple of hours away. I have to go pick them up sometime in the next 1.5 weeks. Roughly how much do they weight? I need to plan on how I'm going to move and load them.

I never weighed mine, but it's a two-man lift. If it's not on casters, I bet you could "walk it" corner to corner(if you know what I mean) to move it. Or take a dolly. But it's a two-man lift for sure. Post pics when you get them home. Especially of any markings, if it has markings.
TEMPORARY DUTY
Top

Thank you Ben and Wingnutt. You guys have answered my question. 125lb give or take is certainly in the two man lift, but one man could "walk" it across a floor. I'll be bringing a dolly and a friend it sounds like. The questions before this was would a dolly be sufficient and how many friends. But it sounds like a two man lift and not more.

You won't need more than two guys and a dolly (if it's not on casters). And you won't need a friend if the seller is going to be there to help you. I bought mine at a flea market. The buyer and I lifted the top end over the tailgate, backside down, and then we walked behind it and lifted the bottom and slid it in. When I got home I slid it out and stood it up by myself.
TEMPORARY DUTY
Top

I agree, my dad (75yo) and I loaded mine rather easily with a dolly and a trailer.

I found these tool cabinets on eBay. They were over in Berlin, MD about four hours away on Maryland's Eastern Shore. According to the seller they had belonged to her Grandfather. He had bought them as surplus from Martin Aircraft in Middle River (Baltimore) in 1945. He ran a meat market nearby to the plant and the plant was a big customer of his during the war.

The cabinets were in his basement work shop from 1945 until a few months ago. They were set up several feet apart with a plank wood work bench top that spanned them both and had front and side edge boards. The result is the tops are in fantastic condition! The only "damage" to speak of is four bolt holes in the side of each cabinet where brackets for a shelf were fixed. Here is a link to the original ad. As you can see in those photos I really had no idea on the condition of the tops, nor if they were even original.

Below are a few quick snapshots from loading up into the pickup. I looked all around and found no markings at all. Not even a manufacturer. The seller indicated the same. She found "Lyon" on the stool and sold them with that information. Others of these advertised online have described them as Lyon as well. But alas no federal stock number

A big thanks to Donnie, Nicole and the faithful hound Theo for coming along on what would otherwise be a long boring drive on Route 50. 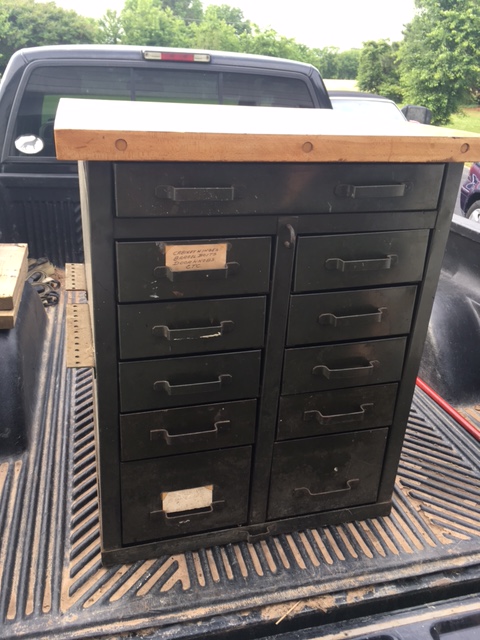 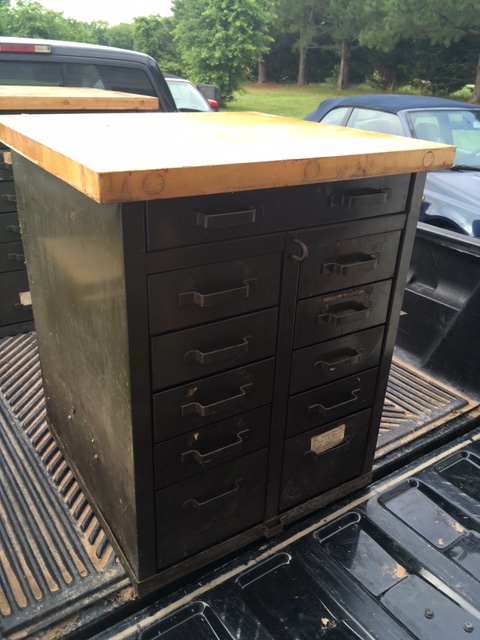 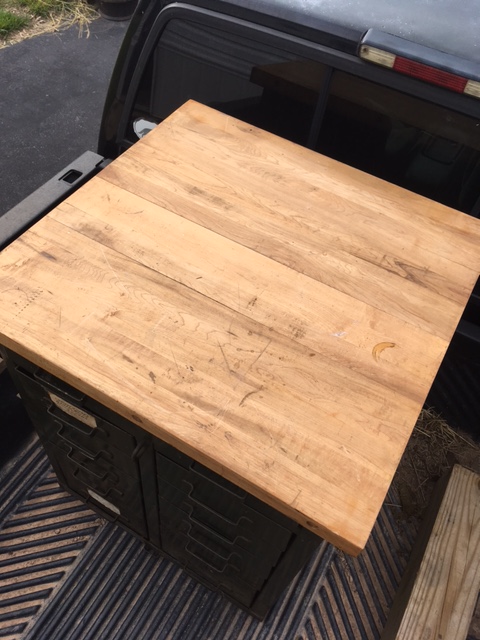 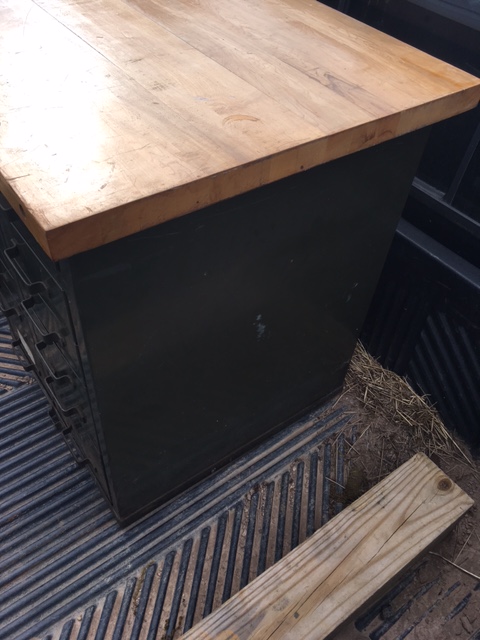 Nice snag on those boxes! I would have made a road trip to snap them up as well!

If you need a template for the security lock bar let me know.
Thanks
Dave
Top

You are almost seeing double. Notice the handles on the bottom drawers... slight variation there.

Yes please!! I need to make these mobile for a maintenance impression at WW2 reenactments so the locking bar will be an important and functional piece of the kit.