I've joined your forum because I have a 41-C-15 cabinet and discovered you while hunting for another one on the internet this afternoon. I didn't know it had that designation until now, but believe they were made by Lyon of Aurora, IL, during WW2.

I've owned mine for about 28 years, having bought it slightly damaged from the scrap pile at a UK Ministry of Defence Royal Electrical and Mechanical Engineers (REME) workshops. I think I paid all of £5 for it.

They actually had lots of them all round the workshops, mainly used for tool storage, and I got the impression no-one really gave them any thought in those days.

I suspect the MoD must have bought a load of them when the war was on, or possibly after it ended. It would be very interesting to find out more.

Mine has the locking bar, which is of flat plate, but that may have been made on the site rather than as supplied from Lyon.

I'm still using it for tool storage and apart from having to weld a couple of the drawer runners back on at one end (it's had a hard clout, possibly from a vehicle), it's a brilliant piece of equipment.

Naively, I assumed I'd be able to get another one easily, but I have quickly realised they've become quite rare, and apart from yourselves, I'll be competing for them with people who want them in their trendy houses.

I found one today which had been for sale in Oakham, Rutland in an antiques shop which I believe sold for £600 a little while ago:

I'll post a photo of mine in a couple of days. Unfortunately, the ones I currently have on my phone are too large.

But it's great to have found this thread and thanks for all the information. It's fascinating.
Top 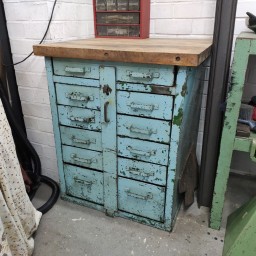 I'm hoping another will eventually turn up to keep it company.

I've also found this link to the August 1955 issue of PS Magazine which has the cabinets shown on Page 8. It downloads as a PDF and although it keeps warning me it's a "potential security risk", I've had no problems with it. I hope it's of interest:

Not sure if anyone else looked at Joe Greaves' link to the pdf of the 1950's "GMTK". I liked all the drawings of the kit and the cross references to the FSNs, many of which were familiar to our GMTK's. Wasn't able to attach the pdf to this reply but here's a download of page 8 containing the cabinet and other tools ... 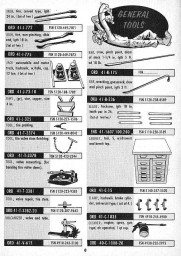 Thanks for this. I was hoping to post the page, but couldn't manage it.

It's interesting to see the FSNs. I'm familiar with NATO Stock Numbers, but the although the FSNs are similar in terms of numbers of digits, they don't include the NSN's two digit location number (eg US is '00', UK is '99'), presumably because they're just for US use?

I think I've found another of the cabinets for sale. All I've got to do now (apart from persuading my wife we do actually need it...) is try to get the price down a bit.
Top

I have managed to buy another cabinet. It should arrive on Monday, so I'll post some photos as soon as I can.

Meanwhile, I found this from last year. Someone was very lucky:

And if anyone is in Colorado Springs, there's this one still available:

It's interesting to see the FSNs. I'm familiar with NATO Stock Numbers, but the although the FSNs are similar in terms of numbers of digits, they don't include the NSN's two digit location number (eg US is '00', UK is '99'), presumably because they're just for US use?

I think I've found another of the cabinets for sale. All I've got to do now (apart from persuading my wife we do actually need it...) is try to get the price down a bit.

The Federal Stock Number is the predecessor to the NSN. You are correct about the similarities. Sometimes removing or adding that two digit code in the center will reveal a legacy part or tool from before the NSN system or expose the current item in use in it's place. Prior to the FSN in that image was the stock number system with a letter such as C for Chest as in the 41-C-15 of this very thread. (you'll find a lot of "T" for "Tool" being used for specialized tools).

Thanks Matt, that's most interesting.
Top

I've now got my second one these. It had a missing guide for the top drawer, and the dealer has clearly given it a quick blow over of olive drab and cleaned up the top, but otherwise it's pretty sound.

There's no locking plate, but at some point I'll copy the one from the blue one, although I'm sure that's not the original.

I've made and welded in a new guide for the drawer, and overall I'm pleased with it. I think that will have to be the lot now (unless a really cheap one turns up of course.) 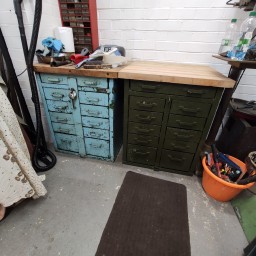 Anyone in the UK after one (or more) of these might like to look at this eBay advert:

Typical, just after I've paid an awful lot more than that for my second one, although it's probably in better condition.
Top

Like two peas in a pod. They look good together.
I've always wondered why they didn't have a tab welded to the side to hang the lock bar from.
Be careful. If they're too close together, they tend to multiply.

Ha ha, yes, I've had to keep them apart.

With those ones I've just spotted on eBay, I have found myself considering a third today, but given the
"domestic turmoil" the second one caused, I think I'd better stick with just the pair.
Top

FB Marketplace find. About an hour away. It's in good shape, but has been sitting outdoors for a couple of years. The top will need refinished. 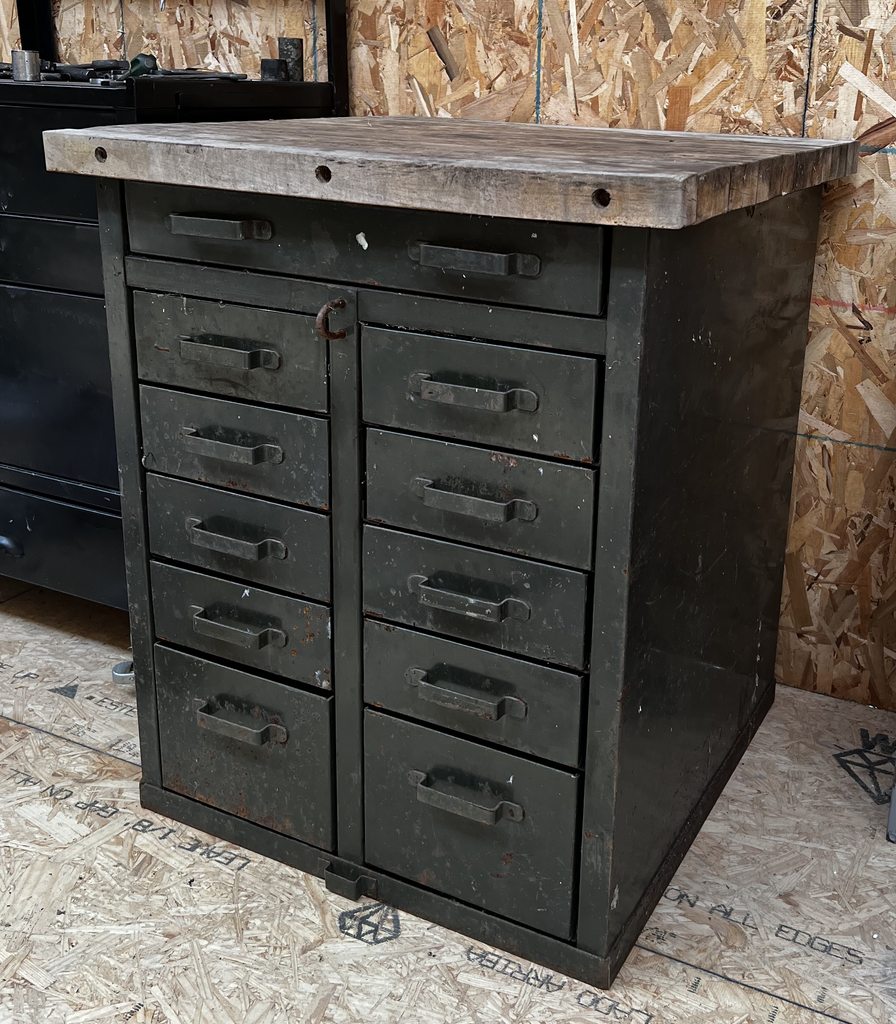 I'm glad I found this thread...I stumbled upon two of these cabinets a couple of hours away on fb marketplace. They aren't in the best of shape. Someone clear coated them as they sat- pitting, paint remnants, rust and all. I plan to clean them up and use them a work bench base. I have a solid 3'x7' door to use as a work bench. They'll forever be part of the militaria collection though...

One needs a replacement top. Any suggestions? 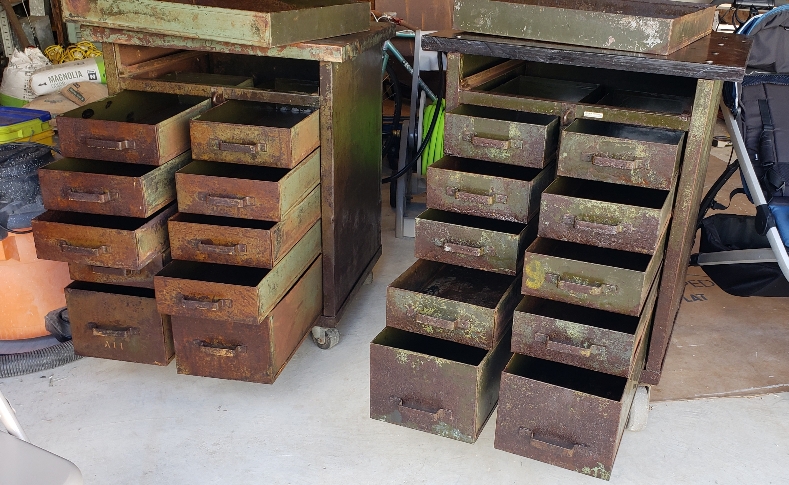 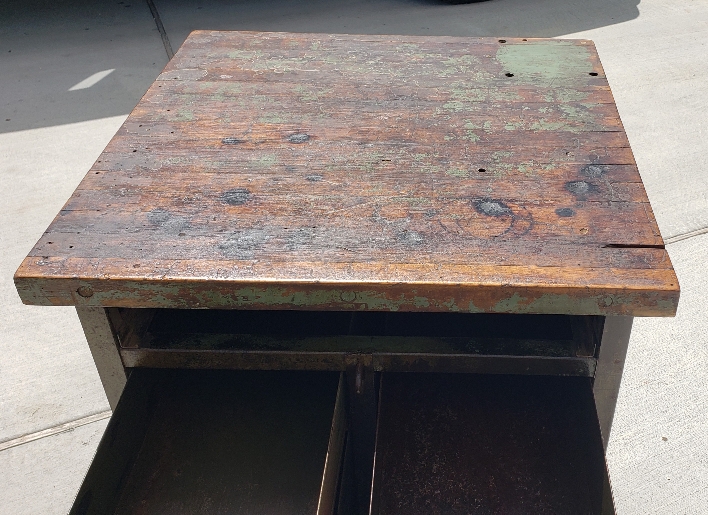 Sent from my SM-G965U using Tapatalk

"You have much to learn grasshopper"-my jeep "sensei"

Users browsing this forum: No registered users and 8 guests