WTK: Who has Ken-Tool wartime tools?

WTK: Who has Ken-Tool wartime tools?

I found this bulky goofy drain plug wrench a few days ago.

Ken-Tool, is still in business, of course. They're huge, and they've been making tire and wheel related tools since 1925.

In doing some research, I came upon this blurb on their company website history page.

"The forties brought World War II, and new challenges as U.S. industry geared up for the war effort. During the war, Ken-Tool developed a special tool to remove tires from the rims of B-29 bombers. This was a unique and costly problem for the Air Corps because of the tremendous heat generated when landing in Northern Africa. Before this tool was developed, planes were literally grounded in the desert because there was no way to remove their tires, which had actually cured themselves to the rims. Lydle received his first patent for this rim tool and was awarded the Army E award by the war department. A second E Award was earned by Ken-Tool for manufacturing forged firing pins for large guns, and an unprecedented third E Award was given for developing special tire and wheel tools for jeeps and other military vehicles."

Bolded areas mine for emphasis.

Frankly, my impression is that Ken-Tool just doesn't have that big of a name in the Military Vehicle Preservation Association (MVPA) community, especially not among WWII tool collectors. And I became even more suspicious of their self-proclaimed rationale for their first E Award when two aviators pointed out to me that that B-29's were not stationed in North Africa.

Disregarding that B-29 error (could have been an honest though glaring nomenclature mistake), does anyone know what rim tool they are talking about for removing airplane tires?

Has anyone ever seen a WWII tool that looked like this? I ask, because this is only patent (D139,420) that John Lydle owned and he was awarded it Nov. 14, 1944. It would have to be the tool they claim won the E Award. 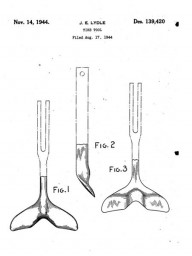 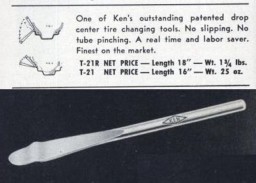 Questions are, does anyone have one? And secondly, what trucks would've it been used on? Not the jeep, which had split rims without a drop-center.

Thirdly, does anyone own ANY other tire and wheel tools (4-Way rim lug wrench, other lug wrenches, regular tire spoons, etc) that you consider WWII tools that are marked KEN-TOOL?
TEMPORARY DUTY
Top

I had decided upon a Ken Tool 4 way lug nut wrench to go in my upper echelon tools but never come across one over here and postage makes them very expensive from your way.

This may turn out to be a multi part reply for better flow. As to the first part of your inquiry. Attached is a photo of the complete bead breaker tool that the “foot” shown in the patent photo you attached belongs to. This photo is pulled from a current e-bay listing (324464424163) of a vintage Ken-tool bead breaker tool.

Now, not to be at all facetious or seemingly condescending but do you guys know the concept of how a tire bead works and why it has to be “broken from the rim”? Some of it is explained by the problem cited that necessitated the creation of this tool. If you do then you’ll understand how the lever action of the tool is used to break the bead so that the tire “spoon” that you show further down your thread can be inserted between the rim edge and bead of the tire to pry the edge of the tire up and over the rim. Breaking the bead is done in a few places along the edge of the rim so that the bead is broken all around the edge of the rim. Once the bead is broken then a couple of the spoon(s) can be inserted at various places around the rim so that the spoons can pry the tire bead up and over the rim edge until the whole tire is lifted off the rim. This same process is done with modern day tires and rims at any tire or repair shop that mounts tires. Difference is it is all done with machines to do the really back breaking work.

Sorry if I went on too long or explained stuff that all of you know.

As to WWII Ken tools owned and other WWII tire tools... that will be in a follow-up post. 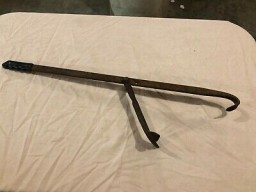 As to the bead breaking tool for the B-29 or any large aircraft (or vehicle) tire... it would either 1.) a tool like the one pictured above (albeit on steroids) or 2.) a sledgehammer like device (also manufactured by Ken Tools. See photo below taken from e-bay listing (124532608319)

The only problem with tool 2.) is that you have to be careful not to hit the rim itself when wielding this thing which is really tricky.

How do I know this about tool type 2.)... because we used something very similar a couple of years ago to break the bead on one of the wheels on our C-47. I was the guy making like Paul Bunyon or alternatively the guy trying to ring the bell at the carnival by swinging the bead breaker sledge repeatedly against the tire edge just about where it meets the rim.

Finally... what some ingenious folks do it the drive the tire of another vehicle over the tire where it meets the rim to create enough downward force to “break” the tire bead away from the rim. 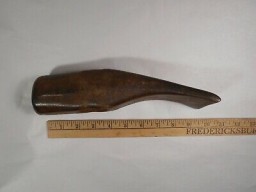 Silly's MB wrote: ↑
Tue Feb 02, 2021 1:59 am
I had decided upon a Ken Tool 4 way lug nut wrench to go in my upper echelon tools but never come across one over here and postage makes them very expensive from your way.

Thanks, Roger. Good to know, confirming my research, and good luck on running into one on your side of the pond!

Thanks. That does look exactly like the patent. I'm still not sure that is the tool the Ken-Tool website is attributing to their first Army-Navy E Award for removing B-29 tires, though. Unless it was much bigger. And even then, would a single handle lever be enough oomph? More research required perhaps.

As for bead breaking, I changed more motorcycle tires than I would care to remember working summers at a local shop with just three spoons, two hands and a well-placed foot. I have seen my share of unsafe 'tricks' (including the use of a jack) and homemade tools, too. I'm sure the many mechanics on this site know them all. WHICH IS NOT AN INVITATION for bead breaking tales, guys! :lol
TEMPORARY DUTY
Top

Sorry for the pedantic recitation of tire changing. Figured most of the gang on here would understand without the explanation but... As to the motorcycle tires that is the best example of manual tire changing as the technique still relies heavily on hand tools to get the job done versus larger vehicle tire which are done with machines.

As to the device used to break the bead on the B-29 tires or any of the larger WWII aircraft, you are right, it would have to be fairly robust to get the job done. Also, I’ll ask around among my warbird buddies to see if any of them might be able to shed better light on this.

This tool meets the needs of unseating problem beads.

This could have been one of their first tools for aircraft tires.

I did notice they refer to as a "Pacific Rim Tool", but that is an entirely different function for removing bead lock rings.
2018 MVPA PIONEER AWARD - MVPA #419
Top

This video brings you right up to... but does not include, when they would have used the "pacific rim tool" on the B-29 tire/wheel assemblies

I don't see a lock ring on the B29 wheel to use a "Pacific Rim Tool" though.

I appreciate your professional expertise in this area. (And, whenever I happen upon the photo of the jeep with the bulletproof wheels, I think of you!)

If you enlarge this, you can see the words Pacific Rim Tool cast into this.
The picture was taken in 1934.
If you look at the 1:00 position on the rim, you see it is a collapsible rim.
I don't believe you will find that the B-29 rims were a collapsible design.
Especially because the back side of the B-29 wheel is a brake drum as seen in the videos.

By the way, the Kentool offices are about 3 miles from my office.
They are on North Street in Akron.
but... I just realized, I am only 3 miles from the Pacific Air Museum on Ford Island today, so I'll swing by the B-29 in their restoration shop in the next few days to look at the wheels to see what tools would be necessary.

Well I went to the museum today, and there were no B-29's, but a B-25 and obviously many other planes from the 1940's.
As I suspected, there were no 'collapsible' wheel designs that would allow the use of the 'Pacific Rim Tool'.

All the wheels I observed were manufactured by Goodyear or Bendix, and designed for operating pressures up to 300 PSI.
2018 MVPA PIONEER AWARD - MVPA #419
Top

Thanks for the report, Joe. I think the Pacific Rim Tool was their very first tool, before Cornwell staked them, and before Mr. Kennedy had the opportunity to buy his own company back.
TEMPORARY DUTY
Top

In April I’ll be in Oklahoma parachuting out of our C-47’s (WWII Airborne Demonstration Team). While there I’ll ask the mechanics how they change the tires and, if they know, how it was done in WWII. Hopefully I’ll have some definitive answers that will lead us to the proper tool(s).