Very large wooden box. No markings. Has the WW2 OD paint look to it. Angled front, drawer inside. What is it? I don't think Signal Corps as there are no data plates. Not Engineer as there are no packing list inside. Part of a truck tool set? Has wood runners on the bottom so it can be pulled out of a compartment?

Boy that is a big one. I wonder what those phillip head screws are made of? Steel, brass or zinc plated.
Stand for the Flag, Kneel for the Cross
Top

No idea, but I like it, Robin. Are there two handles in the back, too, for a 4-man carry? Or was it tipped up and moved with those two handles that are showing as a 2-man carry?
TEMPORARY DUTY
Top

If not, I am going with home made - very well done, but not an issue piece.

Not only that, but the construction style (wood with reinforced steel slat corners) and other features (the hasp, the hinges, and the handles) are classic military. In fact, they match the features of the Grindstone Chest I just found, linked here.
TEMPORARY DUTY
Top

You probably haven't seen the stuff I make - at home.

Not only that, but the construction style (wood with reinforced steel slat corners) and other features (the hasp, the hinges, and the handles) are classic military. In fact, they match the features of the Grindstone Chest I just found, linked here.

I have no idea it's purpose either. But I was going to agree about the construction details. But now that you mentioned the Grindstone chest then that opens up the possibility of this having been on a wagon. We often think in terms of WW2 and later. But could this have been on a wagon, caisson or gun carriage??

Here are some close ups of the details.

I would opt for a Light set or something more admin...not quite paper trays there, but typically everything needs to be boxed for field deployment, and three lower trays might be light head assemblies

with interconnecting cord stowed in the upper tray

(as an example of alternate box use VS tools) the 4 handles indicate it was to be stowed flat, not on end so there is that as well.
What would come in issued in three might be a way to narrow it down some.
Radio gear would be too heavy
Not typewriter material
Maybe maps or graphic materials with three compartments for grease pencils, tape, staplers, erasers, pencils, but it's not set up well for that and most of those are straight up desks with small drawers.
Part of a audio system, i.e. long cord in top tray, three speaker connector cords in bottom trays?

Have to think outside the box

IF the Philips head screws are original, it 's probably post-WWII, right?
-Jeff

Mixed screws (straight and phillips) on the hinges and handles - not to mention the unpainted screws on the hinge.

What appear to be identical replacement handles are available at Home Depot - with phillips screws instead of the straight ones on this box. 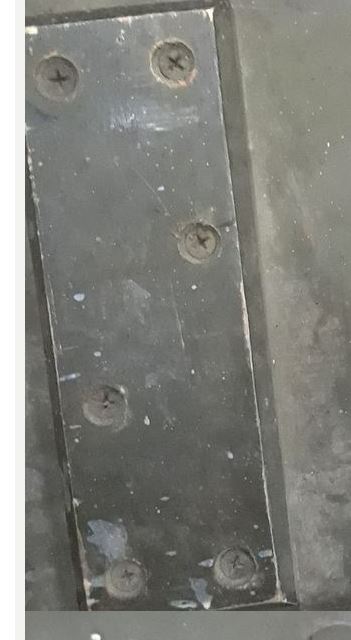