I noticed there were sometimes numbers on the bumper which seem to be battalion markings like on the attached photo (the number"2" before "HQ"). Those marking were yet uncommon to me; in the stencil sets are always company letter and vehicle number. Any information about this? 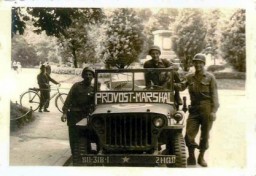 I can only guess “2nd headquarters 8th vehicle”

May be these are onlyon HQ vehicles?
Top

Don't forget that these guys were amateurs, and probably didn't have the AR that tells how to mark vehicles. So you see all kinds of things on them.
The vehicle number is always last, no matter what. They didn't get the memo. No one cared; there were much more important things to worry about in WW2.
U. S. Army 28 years.
Armor Branch
Top

Unbelievable that correct bumper markings were not the most important thing at all. I just watched the film "A Few Good Men" and Colonel Jessup would agree

But: Do you agree that the first number would be the battalion?

Probably but they aren't supposed to put the Battalion on the bumper.
80th ID
318 Infantry Regiment
Jeep belonged to the HHC, vehicle #8.
And somehow got used by the PM. (Responsible for the Military police and security procedures)
I know that Divisons had PMs; not sure about Regiments.
U. S. Army 28 years.
Armor Branch
Top

Although it's changed some over the years from WW2 to today, a rifle battalion usually has 3 rifle company's and a weapons company (4 total companies). Most vehicles in a Rifle Battalion are assigned to the battalion (marked as "HQ" or "SV" for the battalion or regiment headquarters and/or service company's). Not many vehicles assigned to the rifle company (rifle outfits maneuver on foot "infantry") but maybe they had a jeep or two marked as theirs. Would have to study the TO&E in question.

Meaning --- there's no point or need for marking a number to precede a company letter to identify the battalion. For example "F-6" is automatically known by everyone to belong to 2nd Battalion. Marking it "2-F-6" would be redundant. Never heard of outfits having two HQ's...

Lots of other kinds of outfits using lettered company's marked the same. At least that's how I understand it. But as was said above, who knows what the soldier holding the paint was ordered to do? Maybe it meant something in Brigades, Battle Groups, or other special kind of units?
Ron D
1952 M38
1951 M100
Top

pgcf
Sergeant Major of the Gee

It can also be a unit's shortcut for which section owns the vehicle.

If my logic carries over then a 2HQ vehicle belongs to the Battalion's Intel section.

The "1-6" identifiers are used in radio traffic as an abbreviation to refer to the OIC or section in communications.