1941 - 1945, MB, GPW Technical questions and discussions, regarding anything related to the WWII jeep.
Post Reply
22 posts

Sounds like a short somewhere. How many wires did you fry? Trace and try to identify the cause from there. Could one of your direct connections to fill the circuit breaker/filterette gaps not have been properly covered/coated and struck something to ground and short? Seems weird that you could apply power to the system, with no issue, and drive for ~60 miles before the issue arose.
Sean

Joe then sent me EXACTLY what I wanted with the CORRECT fittings on each wire and....best of all, a comprehensive list of each wire, it's color code and where it was to be installed. His direction MANUAL (yes, that many pages!) made it pretty easy to install CORRECTLY the first time without frying anything...that was 20 years ago and so far, no problems with any of it.

I think now days unless you purchase a CUSTOM harness/kit like VWOM and Joe Hall used to offer, you tend to get a "one-size-fits-all" type harness. Meaning that it may contain wiring you don't NEED that is "hot" and it may be missing the connectors you need for your installation.

Ah, the good old days...and guys bitched about how "expensive" Joe's wiring kits were back then.

Later on, Mike Stopforth had a 4' x 8'' sheet of plywood with the whole wiring harness kit outlined and routed through nails so the lengths were correct. Linda used to sit back in the "Wiring Department" and make up the components of the kit and smoke big fat joints all day long. Bless her heart, she did some dammned fine work back there and I think you could order a custom kit from Mike/Linda then as well.
Chuck Lutz

Too bad !
Wiring a harness is huge task and you should always test the wiring for short with a multimeter (very cheap) before connecting the battery.
That said,you have short in one of the path pointed with the blue arrows on the schematic. 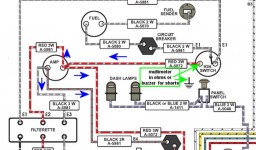 When you have received your new wires, connect them one by one, starting from the ignition switch, in order to find the path where there is a short.
Connect a multimeter where there are Green arrows on the schematic and switch the meter in Buzzer mode if possible.
Use crocodile clips to keep the multimeter connection while you are working.
As soon as you hear a buzzing sound that means that you have a short in the path on which you are working.

Don't hesitate to shake/move the wiring under the dashboard and near the lights, especially the wires on the dashboard light switch (path with the red-white wire N°A5072)
If the buzzerr rings, you have found the intermittent short.

Proceed step by step until you find where there is that intermittent short.
It took a few miles and likely a shock to make that short in your wiring.

As requested by twinflyer17, please tell us which wires have burnt. This will help in the troubleshooting.
The problem/short is located in the downstream of the burnt wire.

Cavlry43GPW wrote: ↑
Fri Jul 31, 2020 8:50 am
.........my ammeter wires caught fire and melted while driving up a steep grade. I guess I will be ordering new wires and some circuit breakers but I don't have a clue why it caught fire. does anybody have any thoughts? could it be a lack of good grounding?

All good advice but it helps if we agree on terms. A "short" is generally defined as a situation where a live (or "hot") wire goes to (contacts) a ground. Yes, it's possible that due to a poor ground elsewhere that a load "grounds" through a light bulb or some other load. A situation where a wire is not connected (broken, switched off, etc.) is termed as "open" (not short). When a wire is proven to connect where it is supposed to the term "continuity" is used. The crocodile clips mentioned above are called alligator clips here in the USA. Use the diagram that YLG80 provided to compare with what you have and let us know. How you dealt with the filterette will tell us a lot, assuming you have one, or whether you have the wires in your harness for a filterette, and where you connected them. I used a new (but unused from 1989) harness (famous name brand) on my MB that was wrong in the fiterette portion of the harness and I had to correct it. You may have a similar problem. Have you put the proper circuit breakers in the harness as we suggested? If everything else on the vehicle is correct, and you don't know much about vintage vehicle wiring, I suggest keeping things simple (stock) as much as possible to reduce the incidence of this sort of problem from happening.
-Jeff

JAB wrote: ↑
Sat Aug 01, 2020 5:37 am
The crocodile clips mentioned above are called alligator clips here in the USA.

Excellent, I forgot that cultural difference

This is what a meant 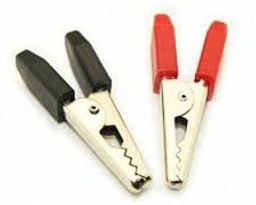 Speculation is running wild. But, guess that is normal.
A lot of good points made but still speculation.
What we know is,
Cav has a new wiring harness.
An alternator. Not a generator. And no idea what make or model alternator.
No filterette. Just hooked the wires together. That is OK. Just be sure the connections are insulated from ground.
No circuit breakers. Again the wires just connected together. Not good, but we all agree on this.
The jeep went 60 miles before the fire. And when the wires burned, he was climbing a step grade. ???
That is quite a distance so the short, if that is what happened, is either intermittent or something else happened.
When the wires burned, it was the wires to the amp. gauge only ???
Questions. You knew they were coming.
Are the only wires burned to the amp gauge ?? No circuit breakers in these wires anyway. And these are the heaviest gauge wires in the harness. If the short was farther down line, the lighter gauge wires would have gone first.
The jeep was climbing a step grade.
So, in a lower gear with the engine RPM high ???
There is an alternator but we don't know what make or model. ???
Most alternators are rated to at least 60 amps max output. Even if the wire from the alternator to the amp gauge and back to the battery was a 10 gauge wire that is only rated at 30 amps continuous. Can stand higher for short periods. This is the wire that sounds like burned up, unless we get new intel.
Back to the alternator. Internal or external regulator and how is it wired ???
You know where I am headed with this.

An improperly wired external regulated alternator could be at max output.
Not so much an issue at lower RPM but in a lower gear, up a hill, at high RPM, for an extended period of time. ??? Maybe smoke.
Now I am speculating.
Could just be time and a bump. Or Gravity going up the hill.
Maybe the amp gauge could not take the Higher amp load ???
What was the amp gauge reading before the smoke ???
Mike Wolford
CJ-2A
VEP GPW
Comm./Inst. SEL
AOPA ( 46 yrs)
EAA ( 46 yrs)
4th Inf. Div. - 5th Inf. Div. - 2nd Armor Div. - CIB
Top