Hi, i am new to this forum and have a question:

I got this Jerrycan marked RTMP. Some says it is richard thomas metal pressings, some say it is RTMP is Rio Tinto Metal Powers Quebec Canada. Who is right? 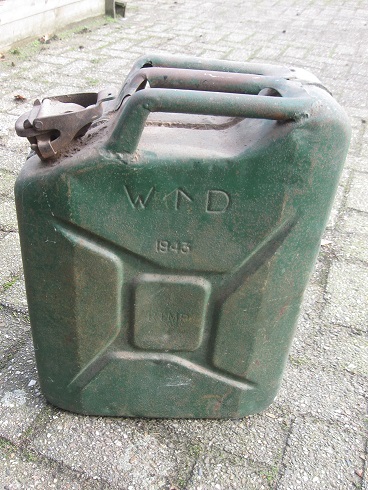 Welcome to the forum!

I'm not an expert on British jerry cans. But if it was built for Canadian military service it would have the arrow in the C instead of the British "Broad Arrow" mark.

It was made in Canada in Quebec. Rio Tinto Machine Products was NEVER stamped C and broad arrow. Unless it was taken
Into CDN ARMY STORES (QM) the Jerry cans were made for Allied use not specifically just for Canada. Production increased for D-Day

Nice can. RTMP in Quebec . Made these. The colour looks repainted. But great peice. I have 1 in my collection.

Thanks. Learn something every day.

Great to meet a fellow collector!

Not totally convinced that it is Rio Tinto; they are an ore company and I can find no evidence that they made anything like jerrycans during the war.
Still think it is/could be Richard Thomas Metal Pressings, especially since finding this on the net: https://www.hobbyhistorica.com/store/p3 ... _1945.html

F&L is definitely Fisher & Ludlow of Birmingham (GB). Rare to see two pieces from different manufacturers combined to make one jerrycan, but it happened with other things like weapons and ammunition in Britain during the war, so why not?
Can't see them sending stuff to Canada from Britain to combine there with other stuff to make a complete product or vice-versa.
Klaas
GPW17331 - DOD april 21 1942 - Dallas
BSA Airborne Bicycle R45105
BSA Airborne Bicycle R49171
Top

F&L. ? Where did that come From. We were talking about RRMP.
Top

In the link in my post there is a RTMP jerrycan with a F&L handle (which looks like it has been there since new). Hence my ramblings

Good on you!
Top

Can somebody point me to some evidence about Rio Tinto making Jerrycans ?
Limited access.
1942 August Willys MB
Complete MVMTS 100% sourced in the ETO

I think I will throw the challenge flag on this play for the following reasons; Richard Thomas Metal Production of Sansea (Wales) was a well known and established tin plate maker from before the turn of the century to well past the war. The Baldwins were in direct competition with RTMP, they made tanks, cisterns and cylinders. Their advert has an office address of; Shell-Mex House, London, interesting in its own. Right at the end of the war RT and Baldwins merged into RT&B, I have an advert with this combination. I have seen cans stamped RTB CP&F (do not know who CP&F is) from 1947 thru 1967. I have seen dates of 1942,43 and 44 for cans marked RTMP. Both series of cans are of the standard German pattern and appear to be of very similar manufacturing methods. In my data base the only cans I show of Canadian origin, during WW2, were made by GSW from 1940 thru 44, in the classic two Imperial gallon cube shape.
Due to the apparent surprise by most who read this post, myself included, that Canada made a German style jerry can during the war, I feel some evidentiary is in order to change the status quo. To this extent, I have been struggling to find direct attributable evidence for many of the war time makers that they in fact produced jerry cans. Some have been easy such as a photo showing a woman welder working on a jerry can and the caption says "war work at Rubery Owen in Darlaston". On the other hand, a few word reference to Brintons Carpets of Kidderminster making jerry cans, has not been equivocated to any know stampings that I am aware of?
Till to day I never heard or Rio Tinto, but am more than willing to be persuaded of their contributions to the war effort. However I would like some type of corroboration to make the case.
If any collectors know the identity of; CP&F, I would be quite interested to know.
Above all remember this is a FUN hobby for the educational advancement in the not so scientic quest for understanding the makers and users of military hand held petroleum vessels.
Cheers to all,
Rick
MVPA #5278, WAC B&G MVT, OMHA
1987 HMMWV w/ M101A3
1989 Perentie
1966 M274A2 Mechanical Mule
1990 FAV Saker
Top