Sam Kimpton, who was among the first gee members to point out a connection between "Mystery cans " and USMC cans, will hopefully forgive me for borrowing his tagged picture. What do the Mistery can and the USMC can as visible in this picture have in common?

There is no hidden trap in this question. Please answer if you feel like it.
Luca

JimP wrote:They both have the same lid configuration.
Jimp

That is undeniable! Thank you.

Anyone seeing something more than just the spout and the lid?
Luca

Here are comparison photographs of the handle profile between a mystery can and some CONCO cans.

Roy, it would be interesting to check similar view of a supposedly CONCO made Mistery/Expeditionary.
Given the handle stamping is anyway different, the relationship between a Conco USMC german spouted can and a Conco two clams would be in the spout.
Robin reported they are identical.

I wonder, and the answer might be not be available, if Conco made their own spouts, or if they purchased them.
We know for sure that at least two Water can manufacturers did purchase the same camlock assembly from MC CORD.
Could the Mystery Expeditionary cans have been manufactured by different manufacturers, but share the very same spout? Not just similar, but exactly the same?

Conversely, could a different spout assembly be found on an american made Mistery can?
Luca

When did the Regia Aeronatica and Regio Esercito start using tanciche? I've been looking at the various Italian collector sites and there are all sorts of variations - some even appear to be "ancestors" of the US QMC/blitz can.

My interest comes from the fact that this site ( http://jeeptools.ifrance.com/urgence2.htm" onclick="window.open(this.href);return false; ) mentions the Italians using cans in 1936, predating the Germans and possibly the USMC. I got to thinnking about it, given Mussolini's "adventures" in Ethiopia and exploration in Libya, the Italians certainly were experienced in the desert.

It may be, given newsreels and military attaches/exchange/liasion officers ideas for can designs were spread.

This Italian site is most interesting:

Did you notice that "ciccio" posted a pic of a can that appears to have no markings on it. Then "kanister" mentioned "J c 5" and "J d 5" on one post? Perhaps Luca can translate those posts?
Chuck Lutz

gerrykan wrote:Here are comparison photographs of the handle profile between a mystery can and some CONCO cans.

Here are a couple of Mistery cans that should not be british made, given the hole on tab is not offset, and given the stamping. One has round burp tube, the other has an oval one. Could they be american made, or might they have been made in some other territory under allied control? Paint base is "that one", in remnants.The green paint is NOT original.

Luca....the Italian site tipdog mentioned has a post by "ciccio" that mentions the "J c 5" and the "J d 5" marked cans. It may be of interest to those who do not speak Italian to read what was posted....any chance you will translate that paragraph for us verbatim?

Meanwhile, here is another can with no holes in the tab.... 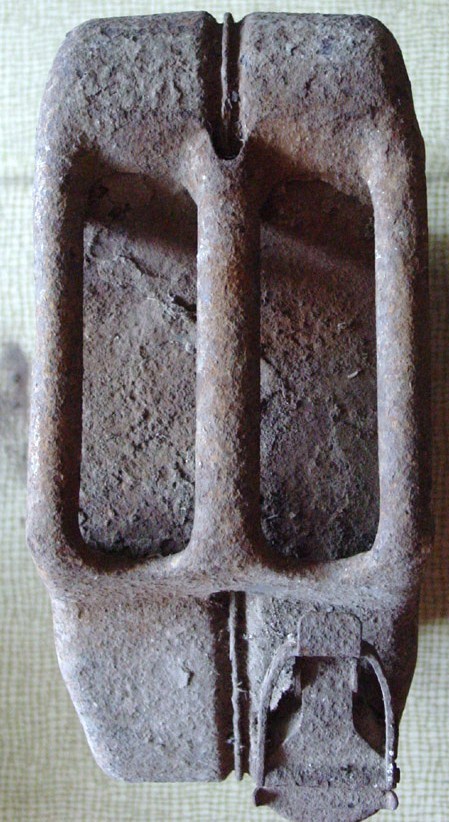 Is there any doubt about the above Jerrycan is not American made ?

is there evidence that the following cans are made in the USA'?

Which are the discriminating features?
Hole on tab,burp tube, holes on handle stamping...?
Luca

Rick, I sent you a private message with answers to your questions regarding Italian cans.
I think the present thread is more about two clams jerrycans that might be made or are definitely made in the good old U.S.A.
Luca

Would anyone who happens to speak Italian be willing to translate the posts that mention the "J c 5" or "J b 5" cans and let us know more about where they are, what the consensus among the experts was about them?
http://forum.worldwar.it/Forum/viewtopi ... 21&t=11144" onclick="window.open(this.href);return false;
Chuck Lutz

Chuck, you can get Google to translate it for you by taking text from the page and pasting it in the Google search bar. When you get the reuslts, click on the Google translation link.

It's not perfect but...
Top

Forgetting italian cans on this thread,is there anyone who would try and tell what kind of mistery can is the one I posted?
Luca

If you post pics that show ALL the details I have pointed out in my thread perhaps someone will respond.
Chuck Lutz