by RadioJeepMan
Dallas and all

Here's a couple of pics of the mount for holding a spare PRC-8/9/10 with it's batt box.

by Carl Atkison
One I didn't see in the list is the SCR-593 used by Coastal Artillery and AAA. Mine's dated 1943 with a vehicle mount.
by Mark Tombleson
Carl, they have one listed on this site. Is this correct? 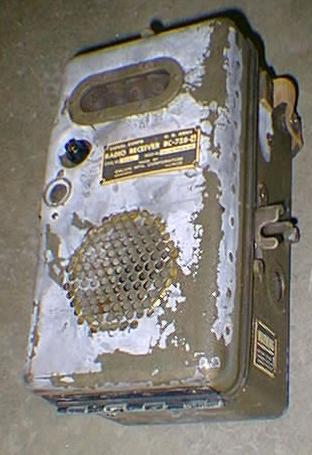 i just have a back pack radio mounted on my jeep for display....

would be nice to get it operational.....

thanks
by brian in denver
heres good basic explanation of wwII radios.
http://en.wikipedia.org/wiki/Signal_Corps_Radio
BB
by Mark Tombleson
I'm going to repost Gunner's reply from another thread for use here... Robert... I hope you don't mind.

Someone mentioned without explaining why that what type of unit the vehicle was assigned to tended to determine what type radios were installed. HF radios (on the above lists the SCR-193, SCR-284 and SCR-506) were used for medium and long range communications and thus were used by all arms. The FM sets (on the above lists the SCR-508, 510, 528, 608, 610 and 628) were (without the RC-292 range extension antenna) short range and were used for vehicle to vehicle or battery to battery communication.

The VHF FM band was during WW-II divided between Armor and Artillery. Armor had 80 channels between 20.0 and 27.9 MC. Artillery had 120 channels between 27.0 and 38.9 MC (note the 10 channel overlap). So Armored Division and attached units would normally carry the 500 series FM sets and Artillery unit vehicles would carry the 600 series sets. Plus a few headquarters vehicles and scout vehicles would carry an HF set.

So depending upon what function the 14th AD Dodge was assigned, either one or two out of the following (i.e., max of two different radios and assuming it's a 12 volt vehicle).

Plus if a Division or Combat Command Headquarters vehicle possibly an RC-58 FAX machine which generally requires one of the HF sets. If the vehicle was set up for liasion with Artillery, it could carry an SCR-608 or SCR-610 plus one of the 500 Series sets. For the official load for a specifically tasked vehicle you will have to check the TO&E of the 14th AD effective on the date in question.

Beyond that, what was actually working in any specific vehicle could have depended upon the scrounging ability of the Signal Corps maintenance people. I'm not familiar with the history of the 14th AD but if they came up from North Africa they might possibly have still had an SCR-210 or SCR-245 or two. And you can pretty much bet that at least a few Dodges had an SCR-499-A in them at one time or another. If they could officially put one in an MB they could certainly have put one in a Dodge. Likewise some SCR-694-C probably got bolted into a few, even though only the Jeep manual ever got officially updated to show it.

I also want to link a thread on how to ask about what radio you need. Included in this link is infomation on a guide to WWII communications equipment by Sam Hevener.

http://www.g503.com/forums/viewtopic.ph ... ner#486771
by petesilfven
I've downloaded and assembled all of the files for JANAP 161. This is a postwar naval publication, listing radio equipment for both army and navy, giving specs, and complete listings of what a listed radio can communicate with. It's pretty handy to have for reference. Be advised that this is a fairly large document (163 MB). The link is below, enjoy!

Thanks for the link, and congratulation for the work !

by willy
Thanks Pete.
As I have said before you are the men.
Some time I wish I had the abelity to say it correct.
But being a imigrant I have to do the best I can.
I made a copy off your post 1170 pages is a bit much to print.
Willy
by AROOGA
BADIN,
This for you. An AN/GRC-9 installed in a jeep causes a name change to AN/VRC-34. See TM 11-5820-453-20. It replaced the SCR-284, SCR-288 and SCR-694.
A typical Marine Corps application for this radio in WII and the Korean War would be on the Naval Gunfire Spotting Net. The Naval Gunfire Spotter with the supported unit in contact with the enemy would request NGF support and once given, adjust fire on the target. Stations on this net were the NGF Spotter with the supported unit (up front as mentioned), the NGF Liaison Officer in the Infantry Bn Fire Support Coordination Center (FSCC)and the Direct Support Ship providing the NGF. The Marine Corps Shore Fire Control Party consists of the NGF Spotters and Liaison Officers. Once assigned to a unit (typically Infantry Bn) they split up as mentioned. Whent the NGF Spotter requests NGF from the Direct Support Ship, The NGF Liaison Officer monitors the request and his silence denotes approval. If he interrupts the request, it might be because he thinks another supporting arm (arty/air) might provide more timely or better affect on the target. Or, maybe the Direct Support Ship is going off-station and it's replacement is not in position. Anyway, this is generally how it worked. Oh, by the way, the NGF Spotter didn't have his AN/GRC-9 mounted in a jeep. He had it in a fighting hole along with the rest of the grunts and his buddy was hand crankin his ass off on the power generator. Now the NGF Liaison Officer was a different story, he used his in the FSCC remoted out to his jeep.
Semper Fi,
T.
by wa5cab
Actually, to get the history correct, the SCR-288 was a stop-gap set bought from a commercial set that was being sold to Sweden I think it was. Sweden got overrun by the Germans and some of the production went to USA. When the SCR-284 got into production, it replaced the SCR-288, and very few of the latter have survived. AFAIK, there was not a vehicular variant of the SCR-288.

The SCR-284 served throughout the remainder of the War but was in turn superceded beginning in 1944 by the SCR-694. However, there is no known evidence that the vehicular variant of SCR-694 actually saw service during WW-II. A shipping SNAFU sent all of the PE-237's to the Pacific and one of the Green Books says they didn't get returned and married up to the radios until just before VE-Day. Parts of SCR-694 were also used in AN/TRC-2, a super-pack set. SCR-694's remained in service into Korea but production of the radio itself (BC-1306) ceased in 1945. SCR-694 was replaced by AN/GRC-9, which initially carried forward all SCR-694 components except for the radio, radio canvas bag and vehicular mount (the latter two being too small to fit RT-77/GRC-9). All other components were initially the same.

AN/VRC-34 and AN/GRC-87 were nomenclatures administratively assigned circa 1961 to allow differentiation between the specific components required for the vehicular and pack set variants for ordering and Unit accounting purposes.
by clarkray
I am restoring a Ford T 16 universal carrier and I wonder if any of you know witch radio was supplied to the Canadian army in them?

by iowa
nice job mark
this is a great thread
i bought this TM 11-487 from s.o. on this forum
and it is really nice
it tells all about WWII radio sets (among other things)
and has a B n W photo of every one of them!
it is really nice for a radio beginner like me to actually see what these radios looked like
(s.o. above posted a request for actual pics of each radio used in the WWII jeeps; this would be great)
does anyone know if there is a digital copy of it's 517 pages!!?
between this TM, TM-2715 (installation of radio's in jeeps, mark's list, Hevener's book, and comments on this thread,
one can get a great picture of the radio's used in WWII jeeps
dave

by Hanselandgretel
There is an excellent reference list of military commo gear, not sorted by WWII or any war, but a great reference of model numbers. Go to West Coast Military Radio Collectors Group website, then Military Commo Equipment List under related sites. Enjoy.
All times are UTC-07:00
Page 3 of 5
Powered by phpBB® Forum Software © phpBB Limited
https://www.phpbb.com/