Can I use my jeep radio?

Can I use my jeep radio?

Is there any practical use for a jeep radio? I found several that need to be restored, and I wondered about buying one and doing so.
But can they be used? Seems like the range is short, the frequency is not anything I could even listen to.

I mean, if I could listen to Europe or something, maybe I'd just have it on in my man cave. But it seems
that restoring one wouldn't make a lot of sense, with no practical use. I probably wouldn't mount it in my
jeep, which is marked as a 1st Infantry Division chaplain's jeep.

Even if I could find someone to talk to, I suppose I couldn't use it to broadcast without a license? 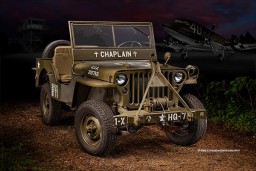 I think you answered all your questions fairly well.
Not legal to even transmit on (modern) frequencies with a license as they are reserved for DoD.
-Weight addition to jeep makes it lumber and roll more.
Takes a lot of space in the vehicle with a lot of holes drilled in things.
antenna's are usually being broken enough by the military to keep businesses making them in business, and surplus versions are becoming more rare and expensive to replace if torn up during events.
- Not all vehicles had radios, no need for everyone to talk to each other back then, one per company or platoon (mechanized) then squad radios for Infantry, so vehicle radios were less used until more modern warfare.
- Cost of a good condition, complete set is always climbing.
- And reality...who you going to talk to...most useful thing to do is adapt them to play a USB or bluetooth receiver to play wartime recordings through them.
So it's the owners choice.
V/R W. Winget
Looking for 1918 Standard B 'Liberty' truck parts
Top

I'm not a licensed operator, but here in the US, the FCC (Federal Communications Commission) regulates what frequencies can be used for what.
The Military has their 'range' of freqs., Cell phones have theirs, WIFI another, satellites, etc. etc. Each user has certain criteria and bandwidth they can use, so when some person or organization uses that bandwidth, they are violating the 'regulation' and when dealing with military communications it becomes a "security" issue, so it's especially sticky.
Imagine if the police were called to help and someone interrupted their calls by playing a song on their bandwidth or such, same situation, but less of a 'national security' issue.
Now the military has for the majority of things moved on from general open frequency transmissions. The radio sets they use today use frequency hopping technology (Invented in WWII to guide torpedo's by Hedy Lamar, the Actress) and other electronic encryption systems to keep the outside listener from monitoring what's going on.
So you won't likely interfere with their communications, (they would have to be within about 10-20 miles of anything your using anyway) but the frequencies are "reserved" for their specific use.
In other Nations, they manage their frequencies in different allotments, hence interfering with TV or Radio stations in Europe might be easier with an old US Army set.
In the US, only the UHF (TV) stations were usually available to listen in to if you had a good radio, and were really bored (night exercises

) to flip through hundreds of channels and finally find one. Really hard to watch TV without pictures, but I do remember listening in a few times.

Hi Billl - "Jeep Radio" - I assume you mean the basic BC-620 or BC-659 R/T sets. They are both "wideband" FM. The BC-659 does operate (transmit) in the 27 - 38.9 mc band which includes the 10 meter Ham Band (and only above 29.0 mc for wideband FM). It is not legal to transmit anywhere with the BC-620 in the US. You can receive with either set anywhere in their range but otherwise unlikely to hear anything useful, not even intelligible CB which is AM.

If you have a BC-659 and a Technician Class or higher license (in the US) it is perfectly legal to transmit with it in the "FM" portion of 10 meters. A common freq for these sets among licensed Hams is 29.6 mc. and is good for simplex, radio-radio comms.
These sets require some work to get them running, proper crystals, tuned etc. but they sound good and are fun and appropriate for Jeep Ops. A Technician Class Ham license is pretty easy to get, check with your local Ham clubs for info/classes. Have fun with it!
Tim
N6CC
Top

This confuses me. When I look at the list of radios at viewtopic.php?t=1311&start=60 it says:

Hi Seth - Don't feel bad, the intricate details of the Regs (as opposed to Ham radio and MV "folklore") confuses a lot of people. As an aside, note that the FCC has no jurisdiction over US Military radio communications (that is the domain of the NTIA) but FCC DOES have jurisdiction of Ham use of military type or any other radios in the US.
I tried to determine what he meant by "Jeep Radio"; that can include many things but I think he means a BC-620 or BC-659. So my comment above still holds for those 2 specific sets.
The details of FCC rules regarding authorized frequencies and emission types for Ham radio operation can be found here:
http://www.arrl.org/part-97-text Paragraph 97.307 (f), Notes 1 & 2.

If he is talking about a stock BC-659 and its associated systems (which is wideband FM: Modulation Index greater than 1) then legal use by a licensed Ham, Tech or higher, is limited to only between 29.0 and 29.7 mc. Wideband FM is not authorized for any Ham ops below 29.0 mc per the above regs.. So that alone excludes the BC-620 from any legal Ham transmission...The devil is in the detail.... ;o)
Tim
N6CC
Top

Copy that TIM. So because Tech licenses are restricted to 28.3 MHz to 28.5 MHz for voice then you actually need a General License or higher to use a BC-659 (or any other military radio)

DING DING DING! We have a Winner! You are absolutely right Seth. You need the General or higher license to operate wideband FM (or any other voice set) above 29.0 mc. Tech stops at 28.5 as you noted - good eye! I need to read the Regs more closely!
As to availability - I don't know. I just returned from the MVCC Camp Plymouth shindig - lots of big "Tank Sets", a few BC-620/659's, PRC-6's etc either on-sale or with a military vehicle bolted to them...Like most things like this, it's governed by what you can find - and restore...
Cheers!
Tim (Proud Mil Radio Nerd!) Hi John! ^^ get home uneventfully? Did your WS-19 go?
N6CC
Top

As others have said, using a radio in the HAM range has limitations and there are a lot of rules and restrictions regarding what frequency you would be permitted to use.

Getting a HAM license is not that difficult, can be rewarding, and you will meet people from all walks of life. Its a fun hobby.

I have had my license (Technician) for awhile and I use it a lot more than I thought I ever would. For example, I live in NorCal and we have had a lot of large fires in the past few years. When these fires hit the phone lines and a cell tower in my area went down, effectively cutting off communication. I used my ham to talk to my family across town and also across the state. My son is a firefighter and he was able to check in and confirm he was doing ok when he was on the fire line.

Also, HAM radios work really well in remote areas. In some areas you will have radio repeaters but no cell service.

The downside...... you may find another hobby that could become an obsession. The good side..... unlike vehicles, HAM radios are not expensive and require very little, if any, ongoing maintenance.

Feel free to PM me with any questions.

Return to “Radio's and Communications”