Here is some tinkering with a M1941 pocket stove roasting green coffee beans:

Here are some pictures of the gear we took to the Chino Air Show, there was a lot of good people, good equipment and Flying machines that would roar by!

We got to the event at 0630 Saturday, so we were pretty much late to the party...

They staged us on the Tarmac and said: "Standby until we find a place to have you park." We were supposed to be set up by 0800 when the public came into the airshow. As time passed and we received no further word on a set up position, I figured "This is it. We aren't getting moved anywhere."

We then deployed our gear in an expedite fashion and began the 48 hour evolution. Unfortunately, I didn't bring all the gear I wanted to. I never got to test out my "Ice Box" like I wanted to. We traveled "Light" and still had fun! I didn't take any photos of the dinner we made, but the dinner was good. Once dinner was cooking more visitors arrived that we did not have chow for so I was getting worried how I was going to feed everyone. They then departed and we returned to our planned ration amounts.


I had some dehydrated items, but didn't bring any protein items to prepare, so I made a call to HQ and the Mrs. rescued us by making a supply run.

Oh, one good discovery I had accidentally discovered is a hot water heater! I put one of my metal dish washing buckets on the potbelly stove and realized the top access hole on the M-1941 stove was the perfect diameter for the bucket to cover and warm up water for dishes! So now the buckets have a black bottom to them from getting warmed up on the stove

Here are the pic's:

Great looking set-up Cody.
Flank on each side by 2 great looking 1½ ton Chevys.
Bratwurst across the way and a hop, skip and jump from Ye old port-a-privies.
Had to of been a fun weekend.

steevo wrote:Nothing from Weldonkrieg, but here is a recent one from Jefferson Barracks in April. Sorry about the car in the background, we were set up by the parking lot. My utensils are hanging from a rope down the middle of the fly.


what are the tons ( with stove pipes ) on the right in the photo?
Top

Good start for some red eye gravy in that cup.
Stand for the Flag, Kneel for the Cross Psalm 55; 9-11
Top

Hello yoeri, The "tons", or as we say, trash/garbage cans to the right of the mess fly are for the cleaning station. They were brand new and sanitized when first put into use. The stove pipes are for the immersion heaters to heat up the water. First can without water is for trash and scraps, wipe mess gear with paper towels here. First can with hot soap water is for washing with long handle brush. Second can, boiling water for rinse. Third can, boiling water rinse/sanitize. You can add a couple Tbls. of bleach to (15 gallons of water) to help with sterilization. A little bleach goes a long way, but don't add to much because it can cause any hidden rust on the steel parts to re-activate. The bleach is just a pre-caution, not really needed if your water is boiling.
I had to put the cleaning station close to the fly only because our camp site was not that big. I would rather it be at least 50 feet away from everything if possible.
Remember...Wash...Rinse...Sanitize...and have a great time. Steve
Top

Hello, I have a complete, new, unused Chrysler Air Temp Stove with all the post/pans, knives, etc etc. I would like to use it as part of my Military Veh Club display but concerned of the safety issues with petrol and how it works with the stove. Has anybody ever converted one of these to gas/propane and how did u do it. Also, are there other options to run it/use? Any info or suggestions would be appreciated as I would like to cook real GI food and let people try it. Thanks
Top

We used them with gas prior to buying M-1937 field ranges for our kitchen. As long as you have a clean burner head and the clamps are all tight on the gas line, they are safe to operate. Just like anything, if maintained well, you should be safe.

We were luck enough to get several from Cheatham Annex Property Disposal Sale in VA. The crates around the immersion heaters had rotted away but you could see the Sea Bee stencil on the side of the immersion heater sets. We typically take one or two to each event just to show off a WWII garbage can

. But we learned early on to put a plastic garbage bad in it because people typically filled them with trash.
The cans we have are to the left of our mess truck as a mess tin cleaning line with the WWII immersion heaters. 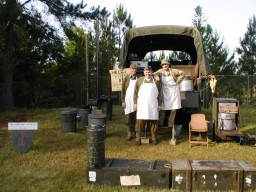