Is this a WW2 German Shovel?

82ndrecontbp
Sergeant Major of the Gee

Is this a WW2 German Shovel? 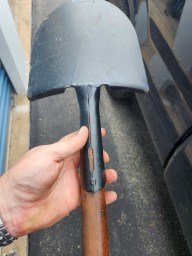 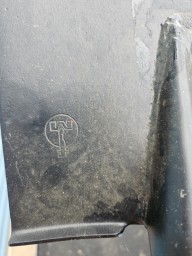 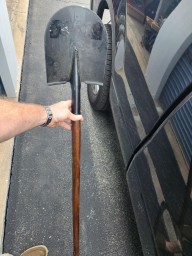 Germany had long handle shovels with round bulb ends from 1800 onward (two mounted on my M1896n/a 77mm Krupp shield for WWI)
Searching German Long handle shovels, it would appear the WWII types had reinforced supports riveted onto the foot to spade area (for the most part)
The Bundeswehr continued to buy shovels after WWII and seeing that the style did not change the neck area did, to welded types.
Below is a version being sold for ? About $50 or less overseas. With the fall of the Wall, many turned up in Germany, so they are not super rare (nor something a GI figured to bring home in a duffel I would imagine)
When we picked up several OT-810's from Czechoslovakia, they came with an assortment of post war shovels that were virtual copies of the German ones, along with Swiss, and many other countries copying German manufacturing designs.
IMA sold some for-a while, not certain if they were WWII or not.
Cheaper Than Dirt occasionally imports this type and lets them go for less than $50.
Here's one with the same forging marks, (left side) seems to be an M with knife stuck upward from the bottom, or a W with knife pointed down, I did not have any luck on finding which trademark this was. Note it has a welded neck, I think this would be post war due to that 'cheap' manufacturing technique IMHO
V/R W Winget 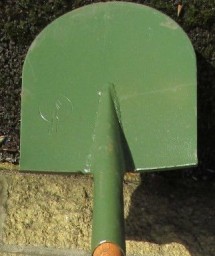 I have a bunch of those and some have that trademark on them. I don't believe they are WW 2 vintage but they kept that design a long time maybe still use it. I have paid between 9-12 dollars for them. Sportsmans guide had a lot of them and was selling 3 packs a while back. Really nice construction and you can put an edge on one side and chop heck out of roots.I will have to go look at markings again not sure if they are all the same or different. Your top pick is a little weird. It looks like a screw hole is visible in that slot where a screw should be holding the head on the handle. What is that little blob on the seam? I know they were not riveted.
Stand for the Flag, Kneel for the Cross Psalm 55; 9-11
Top

Here is one with different rivet pattern

Note the Bayonet? or knife looking F? over an M or up into a W perhaps. 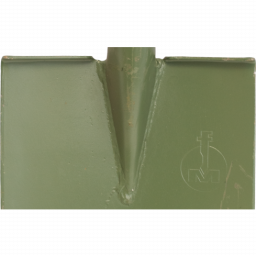 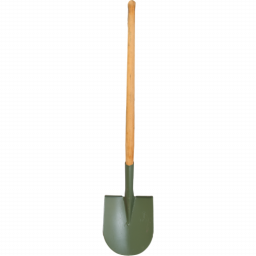 And as a PS:
"The East Germans started welding the blade to the shank instead of riveting, and the metal shank was secured to the wood handle with one or two screws on the back side. This style of attachment is uniquely East German. The wooden handle remained the same."

I don't think they are actually NVA produced, but all the info and a photo of the manufacturer's logo are here on this guys blog:
http://sharky-fourbees.blogspot.com/201 ... l-ddr.html

82ndrecontbp
Sergeant Major of the Gee

I got it for nothing, don't do German stuff, and wanted to send it down the road.
Big help!
Top