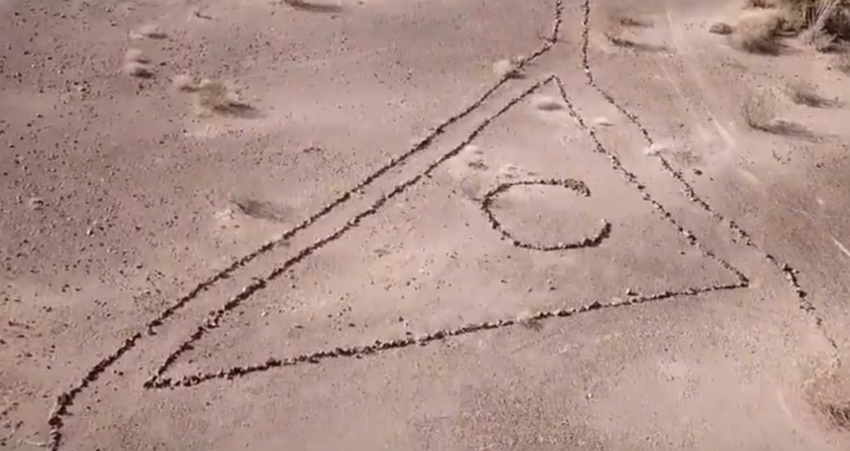 This is nearby for "H" Company so I'm guessing it's for an Armored Division because of its shape and newspaper accounts. 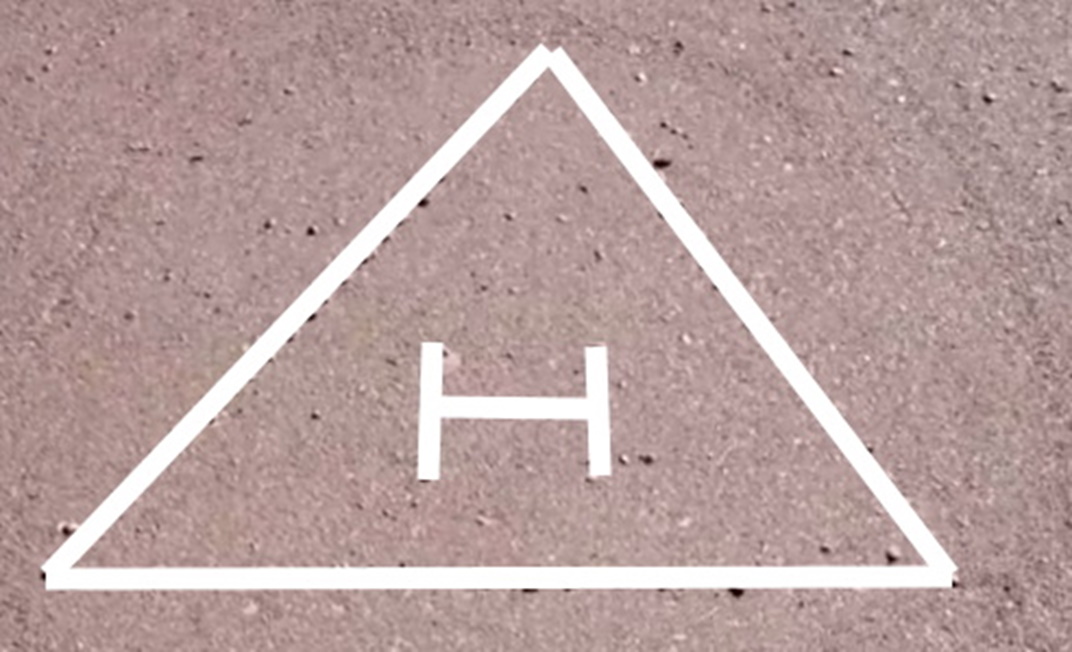 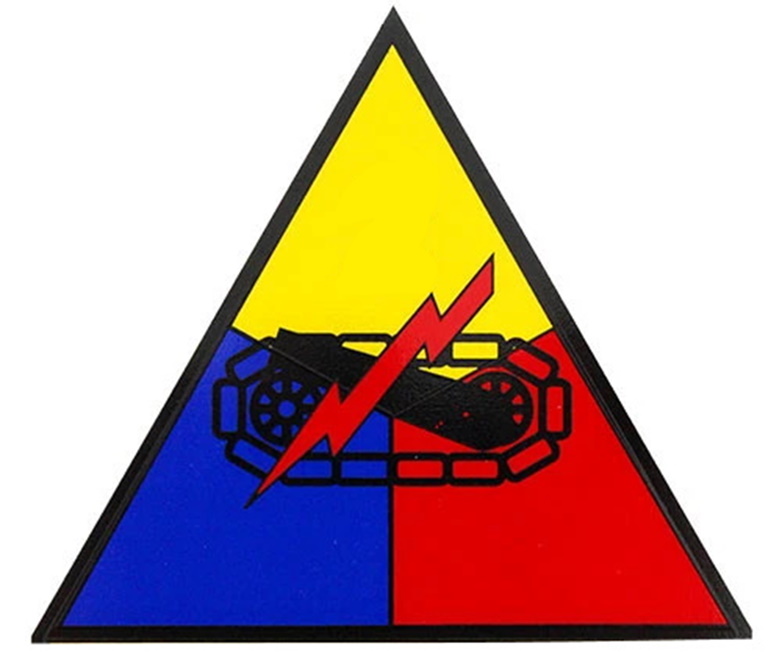 Anyway, my question is this - How would this insignia be spoken? 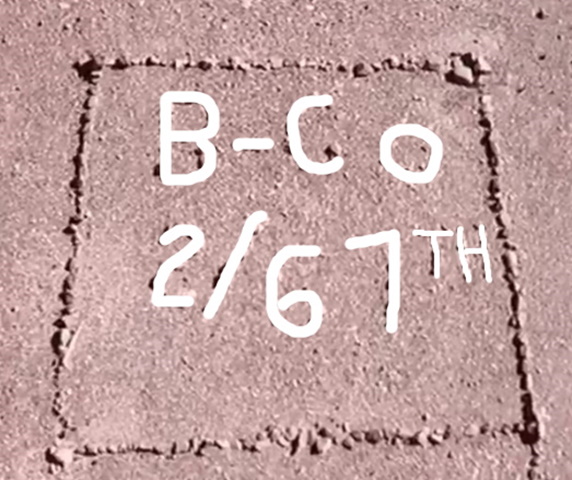 Is it "B" Company, (2nd Division is implied) 2nd Batt, 67th Armor(ed)?
A newspaper article described the writer riding with a tank crew in the "2nd Armored Division, 67th Armor".

Any help would be appreciated.

FWIW, I'd say that out loud as, "B company, two-sixty-seven."

You might add "two A-D" if you were talking to another soldier outside of the division who might not know that the sixty-seventh regiment is an armored regiment in the second armored division, so, "B company, two-sixty-seven, two-A-D".

An alternative might be, "B company, second of the sixty-seventh," but that's probably how some 2LT would likely say it [and he'd probably add "second armored" to the end if talking to someone outside of the division].

Seriously, though, it's mostly a matter of the audience. Within the organization, everybody understands that there's only one, 67th regiment, so the "two" or the "second of" can only refer to the second battalion of the regiment. Kind of a shorthand that everyone in the organization knows.

On the other hand, if you're talking to someone outside of the organization (and especially outside of the Army), you'd probably be saying something like, "B company, second battalion, sixty-seventh armored regiment, second armored division."

Really depends on who you're talking to...
Top

SGM,
Thanks for the reply. I'll mainly (I think) be presenting to non-vets, so I'll go with the suggestion in your last paragraph.

I always thought that in the U.S. Army, the 1st Battalion in a Regiment has A, B, C, (and maybe) D Company's, while the 2nd Battalion has E, F, G, and H Company's, and the 3rd Battalion has I, J, K, and L Company's. I think the Army went back-and forth between three and four lettered Company's, sometimes the fourth was just called "Weapons Company".

So, all you had to say was B-67 and everybody knew you're talking about a Company in the 1st Battalion of the 67th Regiment.

2-67th was the first battalion reactivated in the regiment on 01 OCT 1939. The regiment (including the 2nd battalion) traced its lineage back to WWI and was active at various times in the '20s and early '30s as "proto" armored battalions (tank battalions). In JUL 1940, it was redesignated as 2-6th Armored Regiment of the 2nd Armored Division.

2-67 received its second Presidential Unit Citation (the entire battalion) in OCT 1944 for its performance in 2 AD's attack on the Siegfried Line. It received its first PUC along with 1-67 after Operation Cobra.

During the war, the 67th Armored Regiment had three battalions, number 1 through 3.
Top

This is how one writer named it- 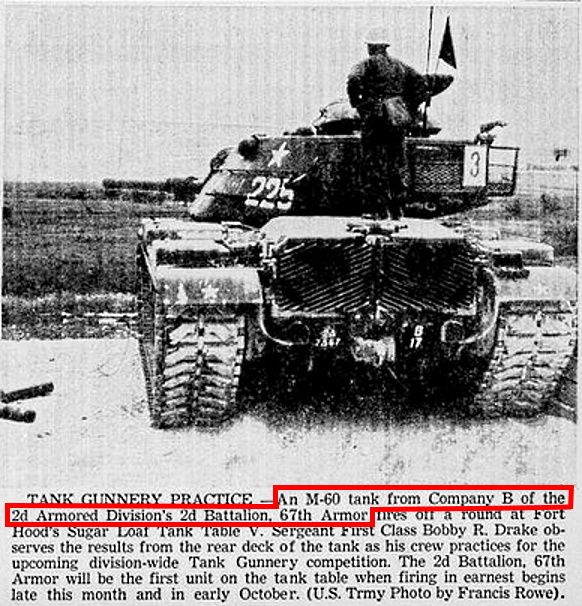 I actually misunderstood Ron's point in his post when I replied. (Sorry, Ron.)

The change to lettering each battalion's companies A, B and C took place sometime in the late 1950's to around 1960. I'm not sure exactly when, but probably took place when the change from the Pentomic Division organization was made back to the triangular division organization. I'm pretty sure the Army continued to letter all the companies sequentially during the Korean War, but by the 1960's, they were using the A-B-C-BN system. So, between the Korean War and the end of the Pentomic Division era (~1957-~1960 during ROCID and ROTAD) was probably when the change to lettering companies occurred.

The Pentomic Division experiment is pretty fascinating study if you're into the nuts and bolts of how the US Army works and what makes it tick. This is the period when regimental cohesion and identity was pretty much destroyed and the origin of all the (failed) efforts ever since to find or recreate that source of esprit d'corps. A century-plus of regimental identity and moral destroyed in a blink of an eye. Once that chain was broken, it's never been reforged.

Finally, in general terms, it's important to keep in mind that battalion organization is also different at different historical periods and within different types of divisions, brigades and regiments. For example, in the history of the same infantry battalion over the course of time, you could find references to "Able," "Baker," "Charlie," and "Dog" companies, and later on you might find "Alpha," "Bravo," "Charlie" and "Delta" companies and then later still the references might be to "Alpha," "Bravo," Charlie" and "CSC" ("Combat Support Company" aka "Weapons Company") companies.
Top
Post Reply
7 posts • Page 1 of 1