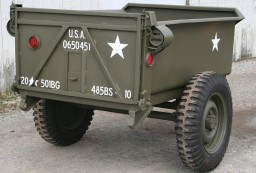 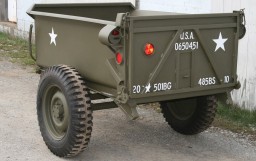 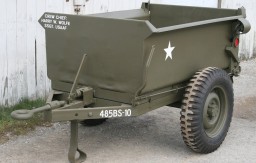 Correct on all counts. I too was surprised that while as you said, while there were lots of views, no one here even bit on it. I thought I had a reasonable price on it given its quality and completeness. The auction selling price basically bore that out.

Many thanks for the thoughtful words.

If I didn't have one in the shop, I would have bought it! By the way, a friend of mine did buy it and it's going to a great place where it will be seen by many!
Top

There is a real interesting story and thought process behind the markings on this trailer as well as a number of other vehicles we have done. Several years ago, I was at Air Venture in Oshkosh WI, looking over the war birds. I came across an L-Bird, I believe that it was an L-5 but don't recall for sure. The owner had several signatures on the inside of the pilots door. As he took the aircraft around to several venues he would often run into folks who actually flew one like it during WWII and/or Korea. He would ask them to sign the door as a way to honor them and their service, thus keeping their memories alive in some small way, especially those of that greatest generation. What a cool idea!

So after giving it some thought I decided to do something similar. As the opportunity presented itself and where I thought it to be appropriate, I would mark one of the HMV's we restored, mostly to Motor Pool Ready Class Standards, for a WWII Vet. For example, in 2011 we took two non-descript WC-51's, neither of which had a good or discernible serial number, nor were they restorable individually, but together they would make one decent truck, and converted it into an air transportable version using documentation from the South West Pacific Theater of Operations.

Col Ron Bagley a native from our home town, stopped by one day before his passing and left me with copies of several manuals from the that he developed in Australia. He and his deputy commander, Joe Berman developed and designed the first air transportable duce-n-a-half while they were stationed in Port Morseby New Guinea, with the 2479th Quartermaster Trucking Company (AVN), part of 5th Air Force. Once Bagley and Berman had developed the prototype and proved the concept, they were reassigned to Australia where they converted 150 more 'Jimmys' and 150 Dodge WC-51-52's

When I finished the air transportable WC-51, I marked it for the 2497th, knowing full well that it was highly unlikely that one of these modified trucks would have ever been assigned to that unit, as well as the fact that Bagley and Berman were not assigned to the 2479th when they were in Australia, I marked it for the unit they were assigned to when they developed the concept. I also listed them as Driver and Co-Driver on the vehicle. It is all about the telling of their story.

I see you are from Oregon. As a side note, when I displayed the Air Transportable WC-51 at the MVPA National Convention in Dayton Ohio in 2011, we received The Oregon Award for Excellence for that truck.

I also did something similar for my Command Car and as you noted the Converto trailer.

The lady who sold me the trailer was cleaning out her fathers house and belongings. He had recently passed away. She was very close to her father and was having a difficult time of it. When she told me that he was a WWII Vet and served with the 20th Air Force, I told her that I would mark it for her father's unit as an honor to his service. She also gave me his group and Squadron numbers. I realize that a lot of the trailers especially in the Pacific may not have carried any unit markings on them when they were in actual use, but their role is different now. When I displayed that trailer, or any of my vehicles at an airshow or other venue, I use the markings to help tell the/their story, keeping their memories alive.

I hope this helps explain, how and why on the markings. As far as the reflectors, I am not 100% certain, but it is my understanding that under a Motor Pool Ready restoration, they are allowed. Perhaps not. 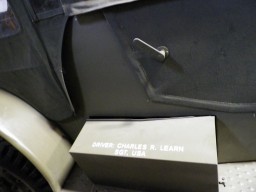 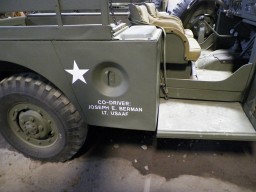 Great story Walter.
I marked the bumpers of my GPW with the 2nd Armored Division, 67th Armored Regiment, D Company. In honor of one my uncles. He was a tank crewman. I don’t know if D company had any Jeeps assigned? But I did it anyway. Because I tell his story to anyone that asks at parades and events.
And… I can’t afford an M 4 Sherman

Walter,
There you go again, wasting time on the "history" of WWII when you should be concentrating on the dollar signs of what it is worth, and what some basement-dwelling evaluator thinks of the restoration..... Sheesh, sometimes you just don't get it.... But then again, neither do I...!

Robin wrote: ↑
Fri Jan 14, 2022 7:53 am
"As you can see it has been fully restored" Really? Wrong reflectors, wrong tilt handle, wrong tail gate pins and chains. Missing tailgate locking pins. And what's with those markings?

This is the reason why many are hesitant to post or join in on the conversation or share their perspective. It's one thing to provide constructive criticism in a civil way, and yet another to come across like this.

If he met the man at an MVPA event would he say such to his face or would he be more civil? I suspect we (me as well), should all take heed of the notion to not follow the degenerative manner that our society calls normal communications.

It's not about thick or thin skinned, it's about how brothers treat one another. Are we not brethren of history and MVs and the like.

We are better than this.
Oz

Robin wrote: ↑
Wed Jan 19, 2022 11:07 am
Perhaps I was a little harsh with my comments, but I recently bought a lunette ring for a Ben hur here on the forum that was overpriced for the condition that wasn't disclosed in the ad.

You are a Gentleman for responding such. Thanks for keeping it civil.
Oz