Can anyone point me to a good source for the proper way to mark an M10 Ammunition Trailer? I've looked in both the 1942 and 1944 versions of the AR 850-5 but it doesn't specifically address the M10. And the M10 is unique in that it has the cutout in the tailgate to allow it to flip all the way down without hitting the pintle hitch, so marking it similar to the G518 isn't practical.

Period photos would be great, but good quality close-up photos seem to be elusive on the internet.

I painted mine up over 10 years ago to match a ETO picture from right after June 6. I picked this at I wanted the star with the broken circle to match my CCKW.

One thing I noted when doing research is that battlefield pictures showed no 2 trailers painted the same way.

Not sure it is completely right but I like the look. 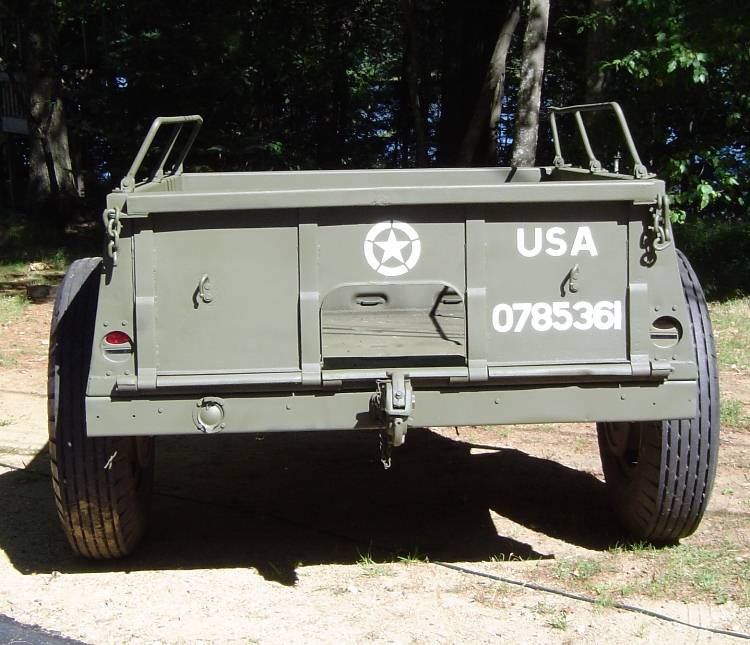 Thanks Bill. Makes sense how you did it, and if it's based off of a period photo that helps.

The manual is a little vague and has contradictory information...it directs the "U.S.A. and Reg No." to be centered on the rear of the trailer, but has a picture of the star centered on the back of the 1/4-ton, 1-ton, and Water Buffalo trailers with unit markings only...no "U.S.A. or Reg No." depicted.

How did you come up with the Registration number? Is there any way to get this based off of the serial number, similar to other vehicles?

That number was on there under the coat of paint. No justification for it. Just evidence of it.

I see some wet sanding in my future....thanks!

Just for discussion, this invasion star issue comes up now and then. One school of though is that since it was done aor aerial recognition, they would not have put the circle around stars on the sides of vehicles. So, a correct jeep under this theory, would have invasion satr on hood and just stars on rear quarter panels. Larger vehicles, just the star on the door or side panel. Perhaps invasion star on hood or other top surface.

Other side of the coin is to make all stars invasion stars.

I put not only an invasion star on my weasel engine cover, but tried the yellow circle for early style and didn't like it after I painted it. Too "look at me" for my taste. When I repaint, probably just stars, or invasion star on top of front panel and stars only on front, sides and rear.
Robert Brough
Winston, GA
2018 MVPA Honor Service Award
A jeep, a truck, and a trailer
Top

No luck on recovering any markings...seems a previous owner of my trailer sandblasted and repainted it.

Hello;
I am french collector of military vehicules WW2.
My trailer M10 is :

And a big plate LODING INSTRUCTIONS

Thank you Serge. That is the first Youngstown serial/registration combo that has been provided.

Unrelated...would you happen to have the strap that goes between the canvas cover supports to hold up the canvas cover? I need pics/measurements of that strap to get one made...

Hello Tom;
Glad that it can help you!
Sorry, i do not know this strap, i only have a tarpaulin NOS dated 44 and 18 original straps (A and C).
Regards;
Serge
Top
Post Reply
11 posts • Page 1 of 1