I came across this fascinating photo the other day. Taken in February of 1945 on Guadalcanal it shows a modifed Mack NO in use by US Navy Seabees. Notice the rear body has been removed, a 5th wheel fitted, the front winch has been moved to behind the cab, rear fenders have been added, and a piece has been welded on top of the cowl to accomodate a MB or GPW windshield frame. These type of mods were not surprising on a Seabee truck as they were well known for this. But how do you explain this big US Army truck being on an island in the Pacific ? The war was still raging both in the Pacific and in Europe, and to the best of my knowledge there were no Army troops in the Pacific, just Navy and Marines. The NO's were only procured for the Army although some may have gone to our allies in Europe. Has anyone seen this type of thing before during the War ? If this was post War it would make a little more sense. 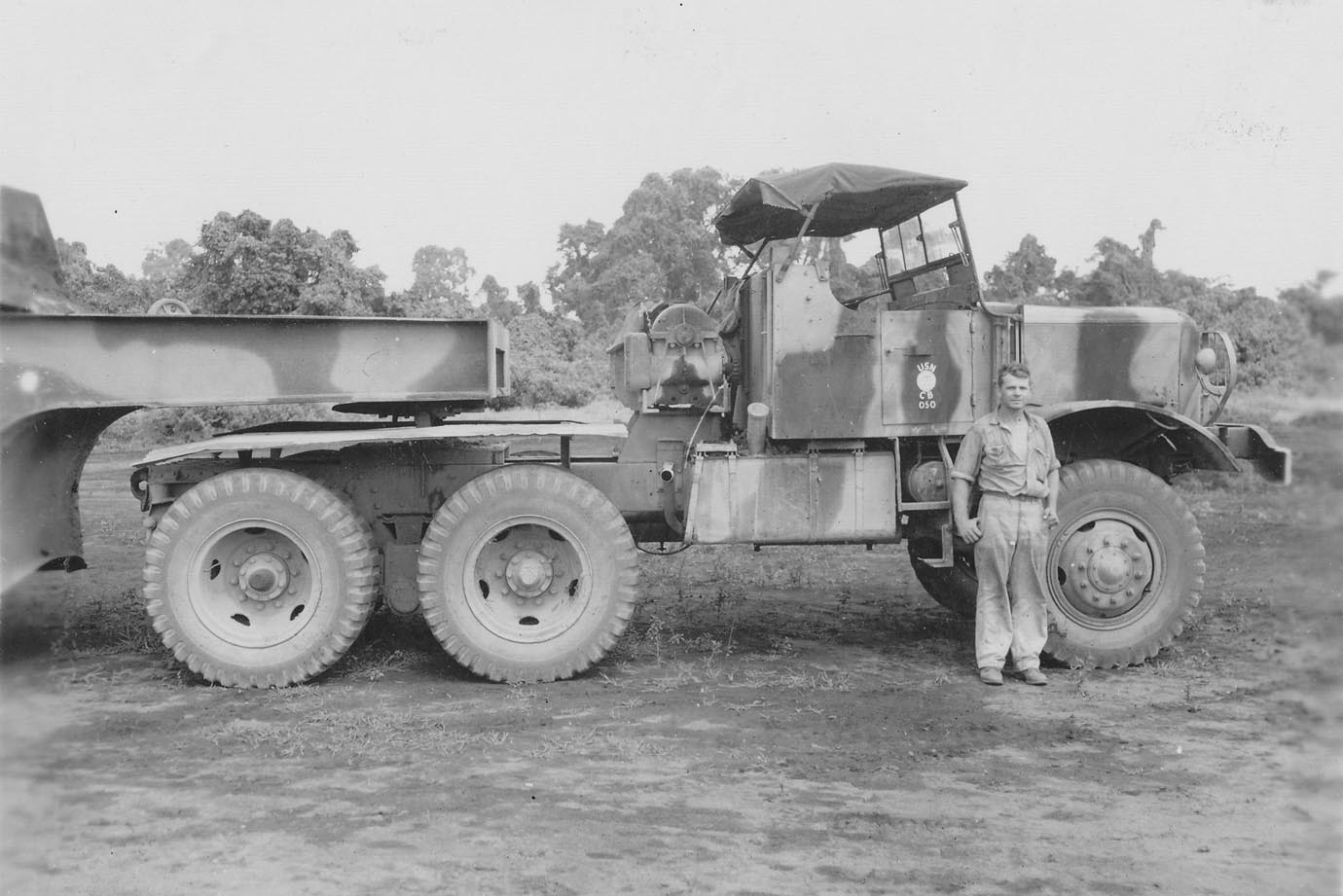 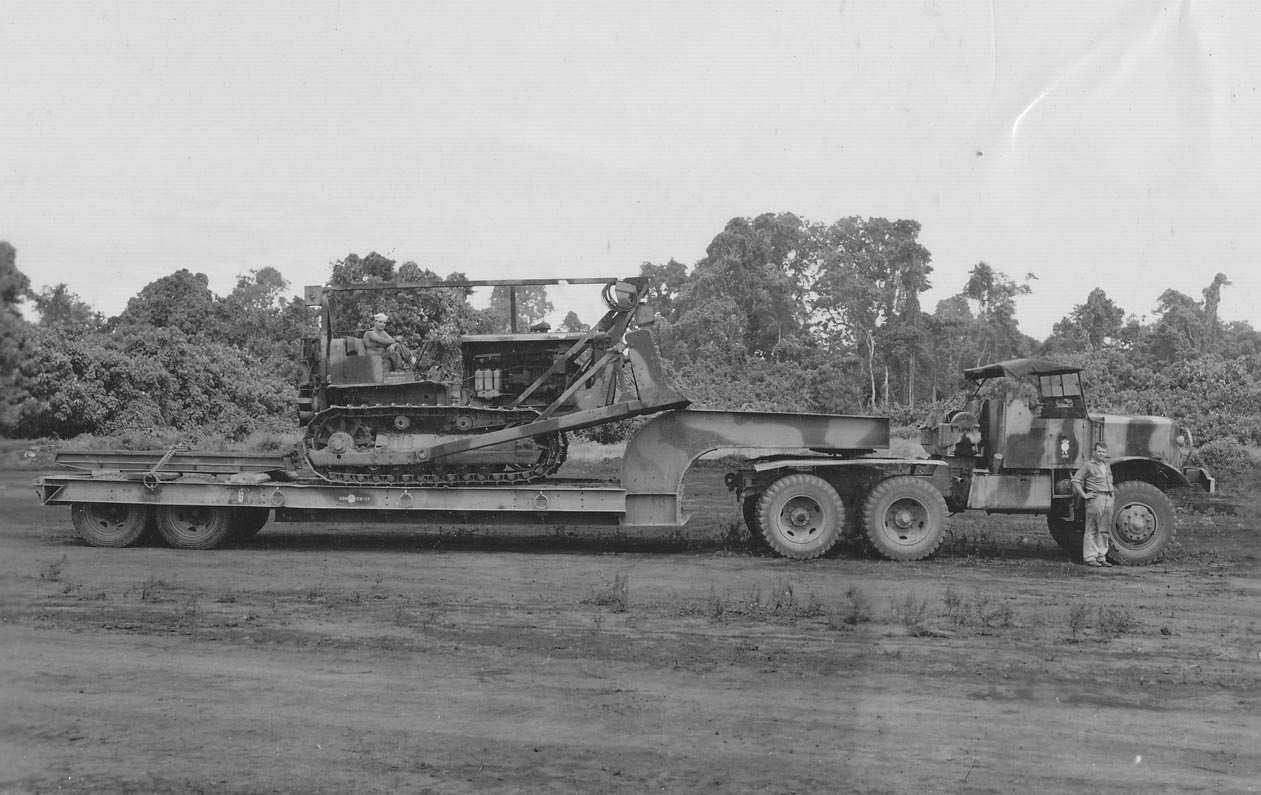 There was ALOT of soldiers in the Pacific! They landed on more islands than the Marines, we just landed on ones that were more nasty.
The army releived the Marines on Guadalcanal. Maybe that is how that truck got there. During the time when the Army got to Guadalcanal, was the first time alot of the Marines there had seen the new M1 Garand rifle.....and had the first chance to steal one.
One of the few, Frank USMC RET
Top

Great Photo! No disrespect to my two former USMC WWII Veteran Uncles or Frank, but there are those out there who would have you drink the "Pacific War was fought by USMC and USN only" koolaid without doing too much research. The 6th, 7th, 23rd, 24th, 25th, 27th, 31st, 32nd, 33rd, 37th, 38th, 40th, 41st, 43rd, 77th, 81st, 85th, 93rd, and 96th Infantry Divisions of the United States Army served in the PTO in various parts of WWII. The 77th did the majority of the long-term fighting on Guadalcanal and were heavily involved in the Okinawa Campaign where Ernie Pyle was killed with them. The 32nd Division was involved in the brunt of the fighting in the Phillipines after the invasion of 1944. Don't forget the 23,552 US Army Soldiers (half of whom were Phillipino's) who defended the Philippines after December 1941 until evacuated, captured, or fading into the hills to be guerillas.

A few months ago, I bought a book about MacArthur's campaign in New Guinea from 1942 to 1944. I wasn't particularly impressed after reading it, so I went to look about more books written about the subject. There were few to none! For 19 whole Army Divisions to be involved (and that's not mentioning the Regimental units which served in the PTO- I started out in one which had PTO history) there is not a lot written. I had known about this and so I always wanted to do a vehicle which was a tribute to PTO combat units from WWII. My Indian 741 Motocycle has Australian combat history and filled the bill. I am painting nose art on the gas tank and calling it "Kokoda Trail Express" as a tribute to the Allied soldiers who fought on it. The Kokoda Trail was a footpath over the Owens Stanley mountains in New Guinea and was fought over by Japanese, American, Australian, and New Zealand combat troops and almost nobody knows about it.

Really, thanks for the photo- it is really neat.
John K. Seidts- Wanted to Buy any aircraft parts or aviation items
Top

Jeff, that is pretty late in the war. SeaBees went in and out of Guadalcanal a lot.

The top bows on that Mack are either very close or the same as what I have on my International M-5H-6.

Thanks for the replys. I didn't realize the Army was on the Islands, now I know better. I wonder if the Seabees had any other big trucks not normally associated with the Navy or Marines ?
Jeff

Jeff, thanks for posting the photo. I think the NO looks better as a tractor. Looks almost like the DART tractor.

Did these photos come from a web site or book?

David, I found them here:

Thanks for the link! What a great collection.

Amazing what they could do with a 50gal drum.

Sleeve
Sergeant Major of the Gee

I read this with interest.......my father served in the Army in the Pacific theatre of operation. He never saw easy duty or less "nasty" combat opreations. He was badly wounded on Guadalcanal, spent over a year in the veterans hospital but recovered and went on to live a long and full life.

great site with great photos,, i have one of those Road ROLLERS,,

i think the history books have sadly wrote that "in general" the Marines took the islands,, and "then" the army came in after and mopped up... but many Army groups came ashore on many of the D-days,, there are many good videos with "army" LVT's coming ashore on the islands. Just a horrible war, the Pacfic was.. horrible!
Top

68427vette wrote:great site with great photos,, i have one of those Road ROLLERS,,

i think the history books have sadly wrote that "in general" the Marines took the islands,, and "then" the army came in after and mopped up... but many Army groups came ashore on many of the D-days,, there are many good videos with "army" LVT's coming ashore on the islands. Just a horrible war, the Pacfic was.. horrible!

I was looking at a large scale wall map of the world we have at work, and noticing all the islands northeast of Australia & New Guinea, and recognizing all the names... I now have a much better idea of where all those small islands I've read about actually are! Makin, Tarawa, Wotje, Eniwetok, Kwajalein, So many little islands! I just found a good pic on Wiki... http://upload.wikimedia.org/wikipedia/c ... ndings.jpg

I never really thought about WHERE they were in relation to each other- We cleared SO MANY islands! Hard to believe. BUT WE DID IT! And the Army made MOST of those small island landings. Somewhere I have a great book entitled "YOUR Victory", which was issued to the army at the end of the war, and discusses all those places, and which units were there, etc... My Dad was on Saipan, but after most of the fighting was done(1946) There were still Japanese holdouts in the hills, and there is some family legend he captured a few, or at least accepted their surrender. Of course, Mom always got a laugh about his stories about when he was rewiring Quonset huts for civilian housing and had Japanese POWs as assistants... He would hand them his rifle as he did the work, and they always handed it back when he was finished! Of course the war WAS over at that point, but still...

Sleeve
Sergeant Major of the Gee

I'm am painting the last few bits of sheet metal along with the gas tank sheild I fabricated. There is still a few square feet of floor deck in the bed that needs painting and a triangular boom that I will be making for the bed winch and then I'll add more pictues to the gallery over on the 1/2 to 1-1/2 ton forum.

There was too much missing for a full restoration but it does have a "working" Army truck look and has already earned its keep around my property doing hauling and winching duty.