I am based on this Fig.5 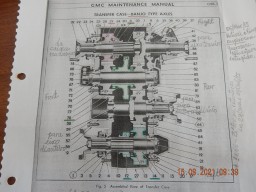 mudflap
Sergeant Major of the Gee

On the banjo axle equipped trucks, the front drivsehaft does turn in the opposite direction than the rear driveshafts.

This is because the front differential carrier assembly (holds the ring gear, pinion, and related bearings and other parts) is the same for the front axle as it is for the rears - just turned upside down.

Since it is upside down, it is necessary to drive it in the opposite direction..

I've always approached it from the viewpoint that the third member was installed upside down to counter the effect of the four shaft gear train which is what dictates the direction of rotation of the shafts.
Which came first, the chicken or the egg?

mudflap
Sergeant Major of the Gee


Which came first, the chicken or the egg?

Good question. This point is actually addressed in Doyle's "The GMC CCKW Truck in US Service".

On pg 53, the topic of production issues caused by shortages of Timken axle sets is discussed. According to the text, earlier on, Chevrolet axles were tried in the GMCs, however the implementation just placed the rear axle carrier in the front, in the conventional position. This configuration resulted in the hypoid gear set being driven on the "coast" side of the gearset instead of the "drive" side, which caused durability issues.

At some point, the carrier was flipped in order to drive the gearset as designed - which required the driveshaft to be driven in the opposite direction. This resulted in acceptable durability, and the "banjo" drivelines were approved for use in the GMCs.

One can only assume that this issue must have been encountered at some point during G-506 development as well, since the Banjo, or Chevrolet driveline was also used in that truck. So, the question would seem to be at what point, or for what vehicle, was that transfer case configuration really designed ?

I am aware that hypoid gearsets have a drive and coast side. I would not have known that it would cause issues driving them from the wrong side. Many years ago I read an article by Smokey Yunick, who was well known for his "innovative" race car designs that often involved a very liberal interpretation of the rules.

In one car, he found it advantageous to run the engine in the opposite direction - something to do with the torque of the engine affecting the roll of the vehicle during acceleration. Anyway, to compensate for this, he turned the rear axle upside down and re-welded the spring perches. I always wondered what the effects would be - driving the gearset through the coast side. Apparently, it worked for him - at least long enough to finish the race.