Mudflap,
From my experience in diffs in cars, light trucks and mid-sized trucks, I believe you are correct. And the same principles apply for even huge units from what I have seen.

Dozerman51,
The common syncro design works as the gear is being engaged, regardless of an up-shift or down-shift.

I crash-shift all the 969 changes as I can only manage around 50% 'clean' shifts despite double clutching and being reasonably capable on Road Ranger boxes. In the 969, I'm a long way from the clutch-less 'soft-shift'!!

Have a nice day.

From what I've seen,

Non-syncro transmissions move or 'slide' the gears into and out of mesh = "sliding gear" type.

Hope we are not getting too far off topic.

At a high level, manual transmissions mainly fall into one of two categories: Sliding gear, and constant (aka continuous) mesh.

As mentioned previously, in a sliding gear transmission, drive and driven gears are not engaged until they are actually moved horizontally, or "slid" on a shaft to engage them with other gears.

Constant mesh transmissions come in two types, synchronized and unsynchronized. In synchronized transmissions, the dog is called a hub, and is splined to the main shaft. Instead of moving the hub, gear engagement is achieved by sliding a sleeve, which is splined to the outside of the hub, over a set of teeth on the gear. In between the sleeve and the gear, is a device called synchronizer. During a shift, the synchronizer acts as a cutch, matching the relative speed of the gears (or "synchronizing" them). The example I often use to explain this concept is a kid riding a bike next to a picket fence with a stick in his hand. If he tries to shove the stick into the fence, it will chatter. However, if you could speed up the fence to the same speed as the bike, the stick could easily be inserted into the fence.

BTW, in comparing the specs for 204-VO-320 in the Federal with the 204-VO-273 in the CCKW, the shift pattern and gear ratios are identical. I'm wondering if maybe the -320 on the Federal could have a speedometer drive, which would account for the different suffix? 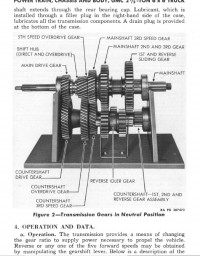 The Truck in question is the Federal @G, I will include another Truck most are familiar with the CCKW as both have the CLARK 204 VO transmission which is a 5 Speed with overdrive in 5th Gear. The TM for Clark Transmissions is TM9-8611 Ordnance Maintenance, Transmissions(Clark Equipment)
I'll quote from description and data paragraph of that TM.

"The Transmissions in this chapter are of the constant-mesh.selective gear type having one reverse and five forward speeds.The gears are selected, or shifted,manually by means of sliding shafts with attached forks and lugs which are supported in, and inclosed by, the shifter shaft housing attached to the top of the transmission case."

That doesn't say much about Sliding gears. My army wheeled vehicle experience included training classes on the DUKW, CCKW, the 1955 GMC 424V Commercial Truck with the 270 Engine and 5 Speed Clark. The TM's for these vehicles all refer to "Selective Sliding Gear type"
The different Instructors all referred to these trucks as having "Sliding Gear Transmissions" which is how most referred to them.
2011 MVPA PIONEER AWARD - MVPA #1064
HONOR GRAD-WHEELED VEHICLE MECHANIC SCHOOL 1960 - US ARMY ORDNANCE SCHOOL(MACHINIST) ABERDEEN PG 1962 - O-1 BIRD DOG CREWCHIEF - 300,000+TROUBLE FREE M-38A1 MILES
LIFE MEMBER AM LEGION-40/8-DAV
7 MIL SPEC MAINTAINED MV'S
COL. BRUNO BROOKS (ARMY MOTORS) IS MY HERO
Top

Is there any good way to figure out what the military numbers on the old truck used to be? Most of them, I can make out, but the ones on the front of the hood are pretty much gone.
Top

Both the Driver's and Passenger's side have a large "25" printed just in front of the door.

Both the Driver's and Passenger's side have "U.S.A. 4457565" printed on the hood, though the passenger side is almost illegible.

And here's the best panorama I could get for the front of the hood.

Excellent find on the registration number! So what is the condition of the JXD?
John K. Seidts- Wanted to Buy any aircraft parts or aviation items
Top

I believe that the engine will run, but I am currently getting ready to clean the engine bay to see what I'm dealing with. From what I understand, the water pump leaked and caused the old distributor to lock up with rust. I know I need a compatible distributor and water pump, then I've got to fix the old hoses and a bit of wiring. Hoping that this one runs well, but I do trust the guy I bought it from when he says it will run.
Top

So, doing some digging on the numbers, it appears that this truck might* actually be a 1944 model. I found some documentation saying that the "Summary Report of Acceptances, Tank-Automotive Material, 1940-1945" from Detroit Ordinance showed a total of 260 1944 models brought in. Does anyone know where or how I might be able to find a copy of that report to see if it has more information available?
Top

Tessfallout,
You may want to research "electrolysis rust removal" to free up the distributor.
It does an amazing job on some items.
I don't remember if it affects brass, aluminum, etc, so do your research as a distributor often has brass/bronze bushings.
Roy
Top
Post Reply
44 posts