Military Trucks 2 1/2 ton and greater, Wanted, For Sale (NO AUCTION or EBAY), and Knowledge Base
Post Reply
28 posts


In the case of Pat, it was the middle two intake valves that bent the pushrods and broke the lifters.

I did not notice the part about the broken lifters in your earlier post... They really broke!?

In what manner? I would have never thought that you could break one of those.. I could possibly see how a stuck valve could bend a push rod (especially on the 270, since they are rather long and slender) but break a lifter? That is a new one on me.


My thoughts are that the failure of the gear caused the lobes of the cam to be out of time which caused the damage.

Given that others have stated that the CCKW 270 is a non-interference engine, and my post containing measurements that indicate it is impossible for the intake valve to contact the piston (at least with this configuration), what leads you to this conclusion? I am trying to understand your logic...

I have never had luck posting a picture to this site.

I will sent the picture to someone who can post it here. send your email to: cckw@comcast.net

my thought on the fibre gear failure is that the nozzle provides insufficient oil to the gear. I believe that this is caused by low oil pressure or a clogged to some degree nozzle. That is the reason that I took the advice of an old post WW2 mechanic about using the oil filter drain to add additional oil to the gear.
Stephen Keith AKA Dr Deuce
www.ww2movievehicles,com

Attached is the pic provided by Dr. D, showing the offending push rod and lifter. 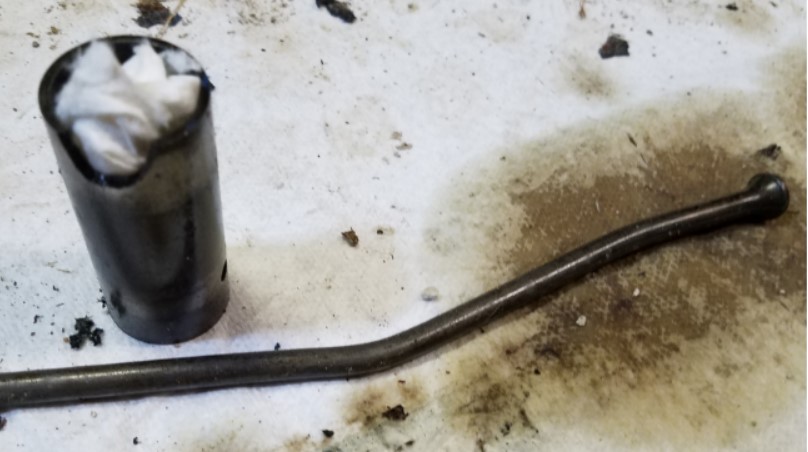 
Wow. In technical terms, those parts are really all busted up.

One thing that I did not glean from the previous posts is whether the cam is currently in time with the crank, or not. Also, you did drive the truck home in this condition, correct?

Two theories:
Also, I too have looked at that little port responsible for lubricating the cam drive gears, and thought how easy it would be for a tiny piece of gunk to plug it up....

Lastly, when you borrowed that scope, did you get a chance to inspect the insides of those cylinders? Just wondering if you had a chance to look for any signs of piston contact, large deposits, or other bad stuff before you had to give it back to your gastroenterologist.

One thing that occurred to me looking at my picture that might be an issue:

I had a an M15A2 for a while. It always started very hard when hot. In investigating the situation, it was flooding when shut down. Like Pat with the late cast iron carb, the M151 had a military carb with the vacume operated accelerator pump vs the mechanical accelerator pump on the older civy carbs used on the CCKWs

With the vacume operated accelerator pump, when you step on the gas with the engine running (having vacume), as the vacume drops, the pump gives the intake a shot of gas to keep the mixture from dropping below what the engine needs not to stumble.

That is the 1st condition. The 2nd condition when the vacume drops is when you shut the engine off. As I found out with my M151 by watching the carb throat, the carb gets a shot of gas when the engine is shut off. That is just the way the carb works. The cast CCKW carb works he same way.

The fact that the middle 2 intake valves had the bent PR problem, lends more weight to this idea: those 2 cylinder intakes got extra gas at shutdown.

The machine shop that showed me the problem after I had had them do an expensive valve job, showed me the stiction problem when I returned the head after it had been rebuilt with al new valves. I could not believe it, but they showed me how it would stick, and stick hard.

When I finished assembling the front of the engine after I purchased the truck, I checked the gear timing. It was absolutely correct according to the manual.

he 2nd condition when the vacume drops is when you shut the engine off. As I found out with my M151 by watching the carb throat, the carb gets a shot of gas when the engine is shut off. That is just the way the carb works.

Good catch. I knew how the pump works while the engine is running, but I never thought about what happens at shutdown.

Based on the manifold design, I'm sure the center two cylinders tend to run richer than the others anyway - even without the offending pump-shot-on-shut-down.

If the you had the head off and observed the sticking valves first hand, then it seems obvious what the problem was. Still surprised it would crack off a piece of lifter like that. Learn something new every day, I guess...

Actually, I never saw the bottom of the head until I was called to the machine shop.

When it 1st failed, it had to be fixed and not knowing the real problem, I thought it was the valves or guides.

The 2nd time, when I took it back to the machine I also did not look at the bottom.

Working alone in both cases, I used the engine hoist coming in from the side (minus fender) and just set it down on a piece of 2x6 and slid it into the back of my wife's Subaru. After 4 back operations, I know when NOT to do something REALLTY stooped like trying to pick up the head....
Stephen Keith AKA Dr Deuce
www.ww2movievehicles,com

Yeah. Been there... Kinda… I have been fortunate in that I have never needed back surgery (yet), but I have messed up my back enough times to know not to try and pull one of those off an engine without help. (At least not without my Chiropractor on speed-dial.) They are heavy, and awkward to try and handle.

So, when you looked at the bottom of the cylinder head, what exactly did you see? All this time I was thinking that the deposits in the valve guides were the primary cause. Are you saying that there were deposits near or on the valve seats, or in the combustion chamber that were restricting movement of the valves ?

The deposits were on the valve seats. I don't know if they did anything to the guides when they rebuilt it for me.

They clearly demonstrated to me the how the valves would stick with the varnish (or whatever it was). I could see the color of the varnish. They were good enough to take the valves out and clean the head completely.
Stephen Keith AKA Dr Deuce
www.ww2movievehicles,com

Have been doing more thinking on this (dangerous, I know). I am still struggling with the fact that this failure did not occur on initial start-up following extended storage, but on restart after it had been (very) recently driven.

I think we have all seen gasoline turn into some pretty nasty, gooey substances after it sits for an extended period of time. So, if an engine sat for months with these types of deposits on the valves, I could believe that they could stick enough to bend a 270 pushrod on initial start up. The 270's pushrods are only 0.250" in diameter, and are very long - approx. 13". (In contrast, small block Chevy pushrods are approximately 8" long.) I'm not an ME, but if you treat the pushrod as a column load (pivoted at both ends) and look up the formula for allowable load of a column, https://www.engineeringtoolbox.com/eule ... _1813.html you will find that it is proportional to the reciprocal of the square of the length. So, this means that as the pushrod gets longer, it get weaker really, really fast.

I was talking to one of my pals about this. He is a retired GM powertrain development engineer with over 40 years of experience on many different types of engines and engine related systems. He has probably forgotten more about engines than I'll ever know, so I showed him the pic of the bent pushrod and broken lifter, and explained the conditions under which the failure had occurred. While he too, was having trouble with the sticking valve on restart theory per se, he did offer some suggestions that makes sense.

If the valves are sticking due deposits on the valve stems, their closing speed will be reduced. As I mentioned earlier, I have actually seen this happen to the point of compression loss and subsequent engine no start. But what if the closing speed was reduced to the point where it allowed the pushrod to lose engagement with the rocker arm? If this were to happen, and the pushrod socket edge got caught under the rocker arm adjustment screw ball, it would increase the effective length of the pushrod by about 0.200".

Based on the measurements I made earlier, this would increase the effective lift at the valve from 0.378" to 0.658". Since the intake valve retainer bottoms out on the top of the valve guide at 0.440", this leaves a mechanical interference of 0.218", which I believe would be more than enough to do some damage. Added to this, pushing on the side of the pushrod socket would also move the load off the center axis of the pushrod, substantially reducing it's allowable load, making it easier to bend.

Another variation on these theories is that the pushrod(s) was bent slightly on initial startup, making it more susceptible to losing rocker arm engagement.

It would be interesting to see the shape of (if present) any indentations on either the bottom of the pushrod, or in the top edge of the pushrod socket.

Thanks. A very interesting analysis!

When I get a chance, I will check out the parts. I did replace the total rocker shaft assy due to the one cast rocker breaking off during the initial startup after the rebuilt head was installed.