Military Motorcycles, and Other Military Two and Three Wheeled Cycles, Wanted, For Sale (NO AUCTION or EBAY) and Knowledge Base
Post Reply
12 posts • Page 1 of 1

I am pleased to say I just found and recovered this gorgeous WWII U.S. Army Westfield Columbia G519 Woman's bicycle, serial number MG154711. Unrestored, but all of the wartime bits to include the grips and wooden pedals are present. 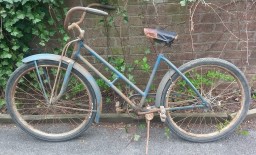 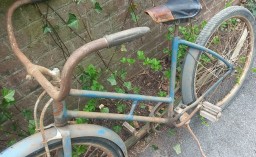 Re;
This is its original rear wheel of your bicycle, L3 ( July - September 43).
I have the same code M3 on mine.
Regards;
Serge
Top

That is a nice find, and increasingly rare to come across these days.

Blackcat is a good friend of mine, and pointed me to your post. Since some of the information he's using is from research I have carried out and published on CABE, I don't think he'll mind me answering.

MG154711 K8, with an M3 Morrow hub. The K8 indicates this bicycle frame was made in August 1943. Due to the urgence of wartime manufacture, it was probably built up into a bike almost immediately. M3 is a Quarter three Morrow code for July to Sept 1943, and that would be right for bikes being turned out at this point.

Mr. Columbia has said in the past that all production records for Westfield were thrown away, so there probably aren't any original production documents to be had. However, when I got my own G519 a few years ago, I wasn't happy with the lack of information available in comparison to, say, G503 (I have a Slat Grill, and some of my older posts are on this site under Adrian Hardgrave), so I sat down to find what I could.

As a result, I have listings of around 70 WW2 Military Columbias, (and over 500 pre WW2 Westfield produced bikes) and a similar number of Huffmans, which helps solve some of the production questions (and raises others).

We don't know, and can't tell what the actual serial number range for those bikes was, since their production is not in a single number block, but is mixed in with G519's (this bike is close to my own G519 which appears in a block of ladies bikes), and Columbia Compax F92L's, and possibly other civilian bikes, not yet identified.

I currently have 13 (including this one) of these M306 bicycles listed as survivors.

I hope that helps, please don't hestiate to ask if I can explain something better.

Hello;
Van, excuse me for the error

Serge,
Oh wonderful! So, M3 is correct for rear hub to my bicycle serial number range - produced in the third quarter of 1943. 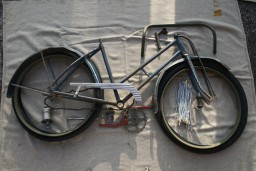 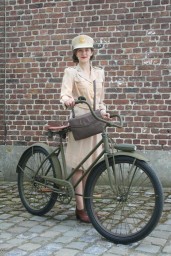 Nice....goes to show they're still out there!! Congratulations!
Top
Post Reply
12 posts • Page 1 of 1