This is only one of many suppliers.

I got ten Speedways for less than $100 each. They no longer have the word speedway on them like the old ones did. 700x16 NDTs. 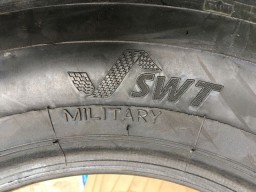 Where can I buy 4 ? They look nice Speedways
Top

I'll dig out the place I got them from; they were on eBay. True story; last year I saw some and they had the word SPEEDWAYS written on them in Huge letters. I wrote an email to the factory, telling them that no military collector wants that, and to stop doing it. They wrote a nice note back saying they would look into it. It probably wasn't the reason, but sure enough, the ones from late last year do not have that on any more. SWT, as in the picture.
Found it quick; place called Speciatytire. They still have them; 5 for $525, free shipping.
U. S. Army 28 years.
Armor Branch
Top

I got my Speedway tires for my Dodge from Performance Tire in CA, but they also have a facility in TN. Free shipping if over a certain amount and my set qualified, a set of 4 should also. So delivered to your door.

Looks like dib difference in price by going up or down a size. Take a look: