I am pretty sure that the change on radiators was done in 1950. Both of mine are side mount. those brackets on the wheel housing could support whatever test equipment there was. Given no tool box and that tunnel on floor under passenger seat it is unique. Anybody able to run those other plates for contract info?
Stand for the Flag, Kneel for the Cross Psalm 55; 9-11
Top

The data plate makes it an early USAF flightline power start unit. Most piston and older or smaller jets used 28 volt DC starter generators then. Newer aircraft like the B52 and KC135 used 115/205 3PH 400 Cyc AC. And air start starters.

The rear floor is clearly CJ3A with the completed strap over the indent rear seat front leg receptacles and drilled rear leg receptacles. Those odd fabricated brackets to accommodate the military rear seat were obviously added by someone but when you'll never know. The M38 rear seat side mountings are quite different than those.

It is odd for a 1952 CJ3A to have a bottom mount radiator. I say odd but not impossible. Since the jeep was a special contract it is very possible it wasn't a standard "Rolled down the assembly line jeep or it is also possible the Szekely Comp used their own stock frames which may be modified in some ways not easily seen in these photos.

The data plate shows both voltages you refer to Wes for older and newer aircraft.
Stand for the Flag, Kneel for the Cross Psalm 55; 9-11
Top 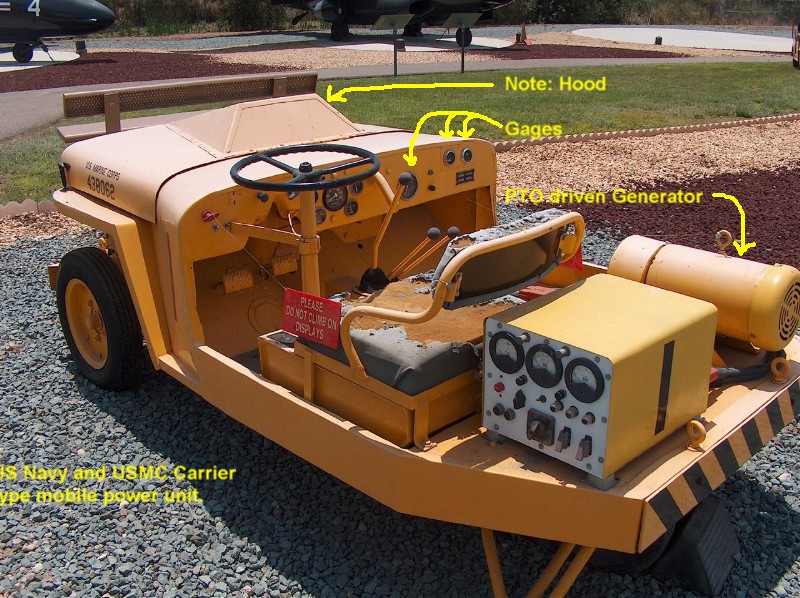 This is getting really interesting. Some searches using Google with this information has among other given me these images from the following website: http://48cj2a.com/apu.htm" onclick="window.open(this.href);return false; 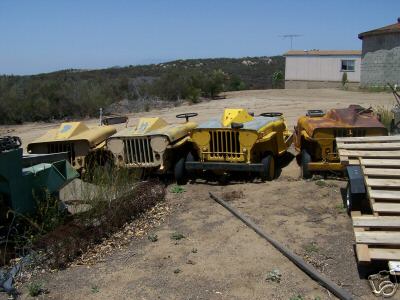 Note that they all have high hoods.


I have also come across a thread on an Argentinian forum that discusses these vehicles (in Spanish, but the photos speaks for themselves), with a lot of images, including these that show a four wheeled version that probably is similar to mine:

This thread here on g503 shows someone selling of a generator, but that one is directly PTO-driven and not via belt.

Comments anyone? Keep them coming. As said, this is very interesting.
Top

Hey guys,
I stumbled across this thread while looking for something else. What are the two guages that are just to the left of the dataplates ?
Thanks.
Top

The far left is RPM"s and the near left looks to be engine hours to me
Stand for the Flag, Kneel for the Cross Psalm 55; 9-11
Top

When did Willys change the speedometer from max 60 mph to 70 mph?
Top

What engine is this? An F134? It is obvious that it isn't a flathead at least.
Top

Definately a "F" head Willys, same type came in 3B and CJ5 family.
These were a popular swap for "L" heads, usually requiring some clearance for the carb.

I wrote: I have also come across a thread on an Argentinian forum that discusses these vehicles (in Spanish, but the photos speaks for themselves)

The willysargentina.com site seems to have gone down for good. Google still has a cached copy of the actual discussion here:
http://webcache.googleusercontent.com/s ... 628a4f3155" onclick="window.open(this.href);return false;


And if you like me not are able to read Spanish, this is how the cached version looks when Google translate has machine translated it to English:
http://translate.google.com/translate?h ... 628a4f3155" onclick="window.open(this.href);return false;
Top

Szekely was a well known manufacturer of Aircraft Ground Power Generators commonly called "APU" They were a popular sound in the 40's thru late 50's at USAF bases using the early Jets, many were SP units that used modified 4 Cyl Continental Aircraft Engines and made a familiar droning sound that would be heard all day long.
Northeast Airlines had such a jeep at the local terminal in the late 40's early 50's for use with their DC-3's.
2011 MVPA PIONEER AWARD - MVPA #1064
HONOR GRAD-WHEELED VEHICLE MECHANIC SCHOOL 1960 - US ARMY ORDNANCE SCHOOL(MACHINIST) ABERDEEN PG 1962 - O-1 BIRD DOG CREWCHIEF - 300,000+TROUBLE FREE M-38A1 MILES
LIFE MEMBER AM LEGION-40/8-DAV
7 MIL SPEC MAINTAINED MV'S
COL. BRUNO BROOKS (ARMY MOTORS) IS MY HERO
Top

Users browsing this forum: No registered users and 16 guests