New Project TEC Trailer? That Turns out as a Bantam T3!

It does not surprise me that the data plate specifies the (Bantam) TM -10-1281 manual : even with the never say never rule in mind, one would not expect that they would print a dedicated manual for such a small quantity of trailers.

Luca, you do understand that U.S. Army Technical Manuals cover ALL of a certain design of trailer or gun or whatever, irregardless of manufacturer?
Top

It is not a matter of me understanding that U.S. Army Technical Manuals cover ALL of a certain design of trailer or gun or whatever, irregardless of manufacturer.
What I tried to convey , apologizing if my limited english does not allow me to satisfactorily reach my goal, is that the "smaller" manufacturers did not print their own manual so they made reference in the data plate to the TM 10-1281 which as you certainly know is a Bantam published manual.
The SNL G-529 manuals are Army manuals, and do make reference to any trailer fitting in the G-529 CLASS.
Nevertheless, also the SNL G-529 do not mention the smaller manufacturers, but this fact is immaterial.


Tipdog, do you understand what I have tried to convey?
Luca

Name dropping galore. What is the use?

Ben Dover wrote:Luca, the more information and history that is shared, the better the owner of a vehicle will understand the situation and what he or she may be facing. Many of those entering the hobby will discover that they are 20-40 years too late to find NOS parts in quantity at the current dealers. Most who have a stock of NOS parts were lucky to have obtained them from the larger surplus truck parts dealers (long gone) who started buying surplus Jeep and truck parts when they were plentiful during the immediate post war period of the 40's - late 50's. There were at least a hundred sources who bought, sold and wholesaled, they are but pleasant memories to those involved in dealing with gov't surplus parts, me included.

Sharing information?
If you post that one source has a part, as you just did for Nelson, and that is not true, the flawed information that you posted is actually detrimental.
Imagine that Gustl guy, calling Nelson from Europe, just to discover that Nelson has not had any N.O.S. chains for several years.. Do you think he would be that happy ?
But you managed to drop in the fact that you are in such a good relationship with the long time dealers etc. etc.and that is apparently more important to you.S.O.S.
Same about a deceased dealer. Why not allow him to Requiescere In Pace. ?

I do not think there is one reader who is not aware that tons of spare parts were surplused in the post war years, and nevertheless they are getting scarcer by the day.Nothing new.
And yes, we do know that you were involved in the business, but why not repeat it once more, eh?
You would be surprised of the quantities of surplus spares available in Europe, some of which have been reshipped to the U.S.A.
Nevertheless,you never hear anyone bragging about it. Why don't you give it a thought?
Politely expressed, as usual: I find the repetitions extremely boring and irritating. Is that you goal?
Luca

The axle is a smooth tube, with 8 leafs willys style springs.
The upper shock mounts are Bantam style (nut) for sure, the lower ones are mixed one Bantam and one Willys (splint), but the lower mounts I have to double-check.

My trailer has the "Ben Hur" style chaines installed, if I see correct Jhonny´s TEC trailer chains are the same.
If I remember correct lowbonnets trailer too, so for now I will keep it that way.

That "indent is where the Lunette was "center drilled" during the machining operation in order to establish a center to machine the tapers and threaded portion concentric to each other. All MBT/BT3/M-100 Lunettes have that procedure.
2011 MVPA PIONEER AWARD - MVPA #1064
HONOR GRAD-WHEELED VEHICLE MECHANIC SCHOOL 1960 - US ARMY ORDNANCE SCHOOL(MACHINIST) ABERDEEN PG 1962 - O-1 BIRD DOG CREWCHIEF - 300,000+TROUBLE FREE M-38A1 MILES
LIFE MEMBER AM LEGION-40/8-DAV
7 MIL SPEC MAINTAINED MV'S
COL. BRUNO BROOKS (ARMY MOTORS) IS MY HERO
Top

Sven...I have several TECs in the data base and one or perhaps two are from the 229th Base repair shops in Japan. Your trailer also has a BLACK RUBBER intervehicular cable on it as well as the Ben Hur chains....I am of the opinion that MANY of the TECs in Europe came out of the KW era and were sent to Norway and maybe other NATO allies after that war. There is a LOT of documentation that vehicles from Okinawa in 1949 (Life photos) went to Japan for a complete rebuilding and noting that you have a mixture of other MBT parts on your trailer further leads me to believe it was also given a major or perhaps at least a motorpool rebuild between WWII and now.

Looking at my data base, the number of trailers with mixed up axels, shock mounts, etc. means that finding one in ORIGINAL condition is the same as finding a matching numbers GPW.....not that common a jeep....and the TEC trailers did get a few other "European Forces" modifications. I would think that the change to the Ben Hur chains would have been close to the top of the list of modifications and updates a trailer would get so it can be towed by the Dodges.

Here is another TEC with the black rubber cable and the additional electrical set up yours has....I can't see the chains though. In another pic from this fence climbing expedition, you can see that one of the TECs also has a 229th Base tag next to the data plate... 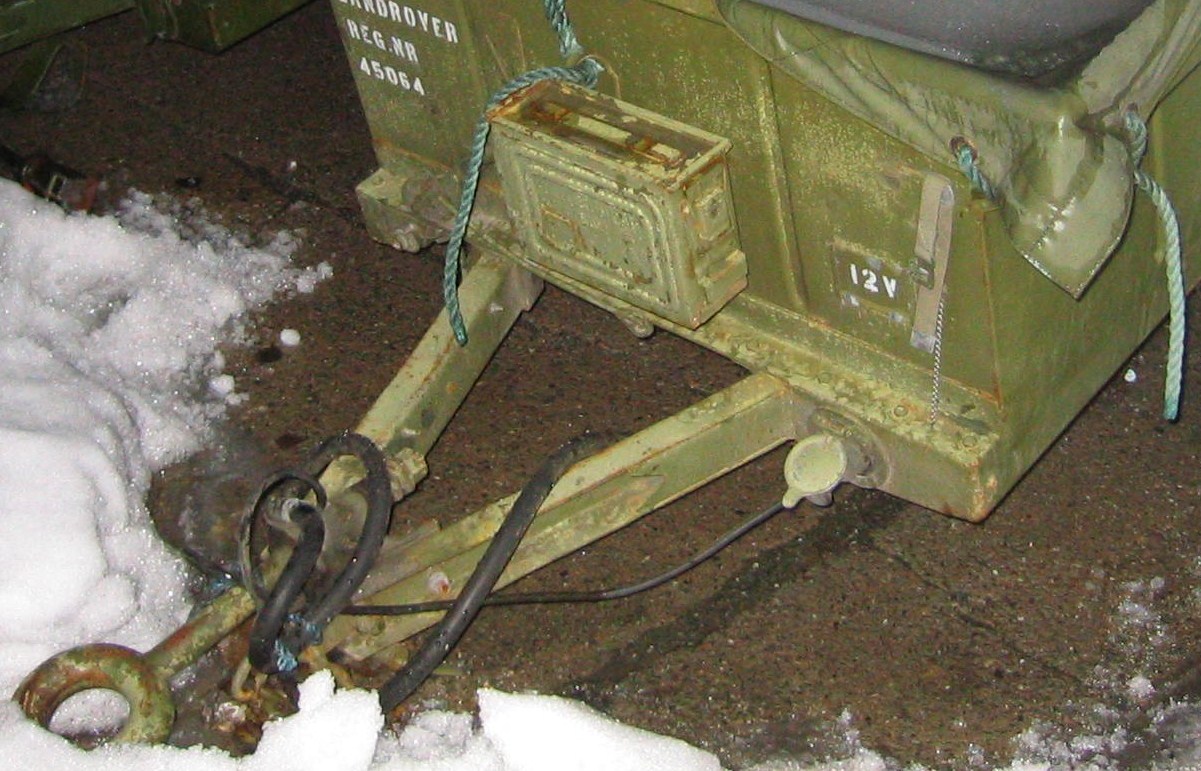 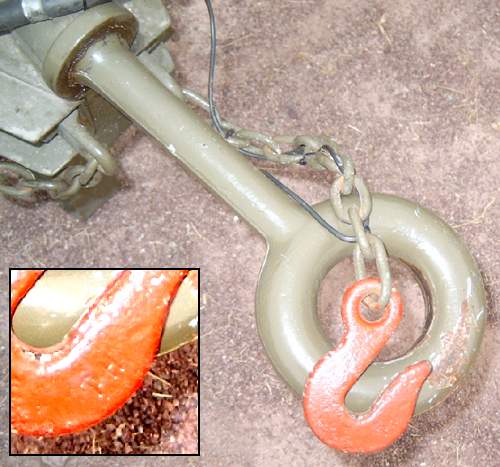 What I tried to convey , apologizing if my limited english does not allow me to satisfactorily reach my goal, is that the "smaller" manufacturers did not print their own manual so they made reference in the data plate to the TM 10-1281 which as you certainly know is a Bantam published manual.
The SNL G-529 manuals are Army manuals, and do make reference to any trailer fitting in the G-529 CLASS.

The numbers 10-1281 and 10-1230 are U.S. Army assigned numbers to manuals published by Bantam and Willys respectively.

I'm glad I stick with M416's - the manuals are the same regardless of manufacturer.

FYI....Luca and I both have the 25 August 1944 ORD 7-8-9 SNL G-529 which clearly stated on the cover it was for the Bantam T3 and the Willys MB-T but did not mention any additional mfgers for a very good reason.....none of the other mfgers had produced a trailer yet and I doubt a contract for them had been signed by the time this manual went to print.

The the 1944 ORD 7-8-9 SNL G-529 manuals ( I had sent copies to friends and to other gee members)of course do not mention the additional manufacturers, since these had not produced trailers yet.
However also the postwar 1951 ORD 7-8 SNL G-529 still makes reference only to the two same manufacturers.
I do not think that this undeniable fact changes much, and I cannot but share the concept pointed out by Tom W.:these are spare parts manuals,so reflect what was available for replacement, more than what was used in assembling, although obviously these mostly coincide.
The knowledge on the "other" manufacturers is apparently, and unsurprisingly,not yet on the same level as for the two main manufacturers.
Luca

Today I had the time to dissemble the trailer.

One day of work and all screwed on parts where unscrewed.

I found the the following Nummer 88223, after cleaning the area where the left spring hanger was boltet on.

The handbrake and A-frame where attached with BC marked screws.
Last edited by Peewee on Mon Mar 28, 2011 2:05 pm, edited 1 time in total.
Sven Kunkler

How certain are we that the "TEC" trailers with the Japanese rebuild tags are even TEC manufactured? Mine had aluminum rivets on both the brass TEC tag -- unstamped -- and the aluminum rebuild tag... Since when did we install dataplates on trailers with aluminum rivets and how could they possibly match when the tags were supposedly applied nine years apart (1945 and 1954)?

I wouldn't be surprised if these rebuilt trailers used blank TEC tags caus' that's what the Japanese had sitting around. Has anyone seen a legit, stamped TEC tag on one of these rebuild trailers???

There is only ONE TEC trailer in the data base with anything stamped on it and it is Sven's...but, as he and I have discussed, the data plate on his is a reproduction....and since TEC did not begin production until 1945....a DOD of march 1943 completes the fantasy.

Sven's has an ACM number circa Nov/Dec 1943 and has Bantam characteristics....so it is in fact, a Bantam.

There are other trailers in the data base with a 229th tag on them and they also had ACM numbers from much earlier than 1945.

Since we have only the existing TEC data plates to check out and since more than a few of them in the data base are from Norway and since all of them but ONE have a 229th tag....and since only 221 were made by TEC....it seems reasonable that all/most of them went to the PTO and ended up in Japan, got rebuilt, went into NATO stockpiles and were surplussed.

In looking at them, the TEC data plates have a slightly rounded rivet head on the plate and the 229th tags have FLAT rivet heads on the plate which would seem to indicate they were not put on at the same time with the same machinery.

I don't have any pics of your data plate or 229th tag Jeff....any chance you have some your could send for my files?
Chuck Lutz