I recently acquired a 1942 Willys MB-T from a collector friend of mine. The back story, the trailer was completely burned to a crisp in the Paradise fire that's the one where PG&E pretty much burned the entire town to the ground in northern California. Fast forward, I decided to try and bring this one back from the dead. The nomenclature data plate melted in the fire; however, it was an October of 42 build, Normally I would have skipped on one like this but it's early vintage and challenge drove the project. The fire was hot enough to reverse the arc of the leaf spring as well as warping the cast center 3 section axle out about 2 inches, a lot of press work went in to getting it straight again. The brake shoes actually had there lining burned off as, it also burned all the bearing grease out and smoked the bearings. The two front tongue frames were warped about 3 inches out of plane and required us to fabricate replacements that are identical to the originals. We machined a new pental hitch. The safety chains were still there but no hooks so we CNC cut chain hooks and then counter sinked the chain eyes so that they look original, as early 42's did not have casting letters/numbers. We built a die and pressed a new front panel for the tub, we have a couple of large presses. And did our best to straighten the sides and back, RFJP came up with most of the parts needed, wiring harness, trailer plug, bearings and Brake parts and I had a set of battle wheels along with the correct taillights and black out switch. it's not perfect but hay it's 80 years old and cremated. 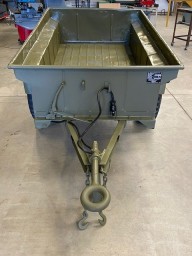 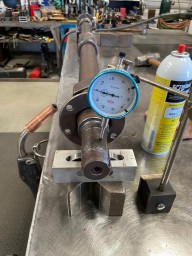 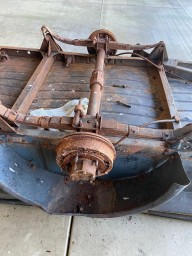 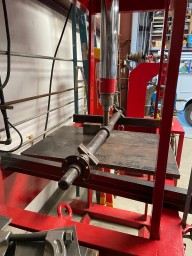 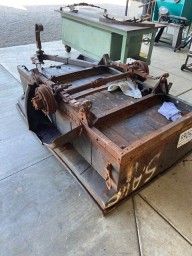 Awesome! Thanks for sharing.
Bill H.

You have to name it Phoenix

Friend of mine take his combat rims when he can't get the old tire off and throws them in the bonfire. Melts the tires, leaves the steel cable around the bead and saves the combat wheel halves. I don't know a thing about heat treating steel, but he uses fire to his advantage. Nice to see the trailer survived the fire storm. Yes to Phoenix, rising from the ashes.
Top
Post Reply
8 posts • Page 1 of 1