Valuation on team of mules needed.

Valuation on team of mules needed.

I'm not a mule driver, but one has always been on my bucket list. Have the opportunity to acquire two mules, but I know nothing about value or what would be a fair asking and selling price. Here is what the son of the owner is saying:
One mule is an early Willys M274 with a four cylinder engine, and the
other is a late model M274A5. I think most of the parts are there. The
A5 ran and drove before it was disassembled. There are eight new tires
and tubes included. Those retail for about $1000 by themselves. There's
a spare four cylinder engine, a set of original military fenders for
wide tires, new seat cushions, and one of the mules has a NOS
transmission installed. Also, if I remember correctly, both of them have
electric starter kits included. They're both projects, but you could buy
both, restore them, and sell one to end up with little or no cash in the
other you keep... Just a thought.

My initial thought is that the early Willys is the value, but I don't knwow if the collector market wants the later Vietnam era machines. Are these two machines equal in value?

Want to make this a "win/win" both buyer and seller.

The M274 with a 4 cyl engine is unique and the engine is hard to find parts and rebuild. It is not going to be a mule that is most sought after. Most people in the mule community want the 2cyl engine because of its dependability and parts are easier to get. But a fully restored/running M274 could be what some would desire because of its rarity.

The A5 has an aluminum bed and wheels best for durability over magnesium and was the last to be produced. With the new transaxle you have a drive train that is the most expensive and difficult component to repair. I guess the A5 has the new transaxle since a new M274 transaxle would be very difficult to find. One thing that is done to the 2 wheel steer A5 is convert it to 4 wheel steer now you have the best of both machines the A2 and A5. The A2 has a magnesium bed and wheels.

The other parts of the drive train [brakes and drop gear housings] are easier to to repair and find parts for.

Would love to see pics then we [the G503 community] could give a better evaluation.
Mules are my passion
www.m274armymules.com
Top

They're both projects, but you could buy
both, restore them, and sell one to end up with little or no cash in the
other you keep... Just a thought.

It never works out that way!

If you want to make a little money selling mules, start with a lot of money!!
As Charles says, you better make sure all the "impossible to find" parts are there, some parts are just no longer available.
From the description, I'd think $2-3K would be the limit.
North Alabama
Dixie Division Military Vehicles Club
former MVPA member
Top

Careful what you wish for . . . here is what I have from the seller. I did not take these, so I don't even know what these parts are. If you see something that is significant or don't see anything that will be big bucks to replace, plese let us know. I think the seller is thinking along the lines of what his father had spent on them and as we all know, that doesn't really equate to what something is worth in the marketplace. Again, any help greatly appreciated . . . 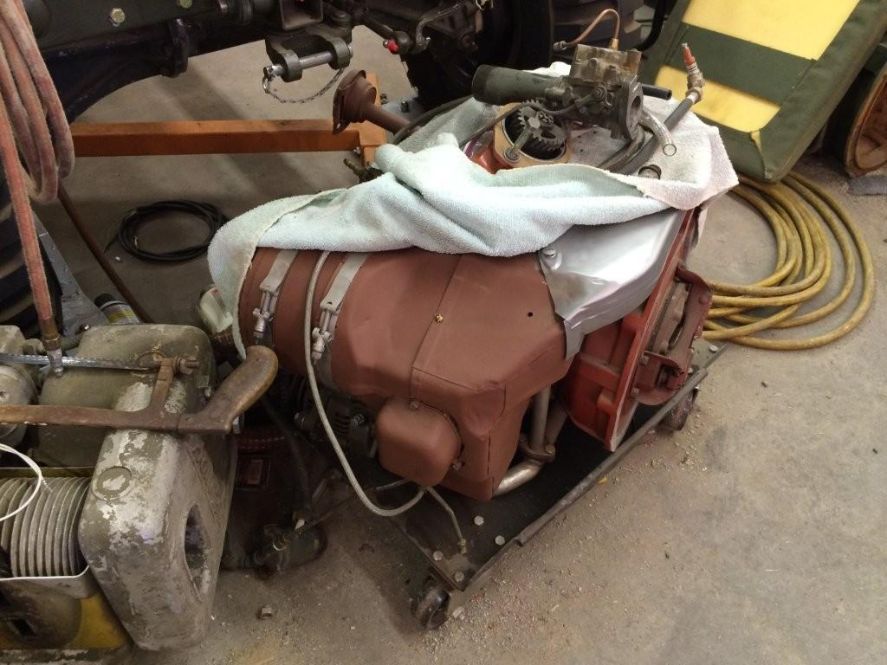 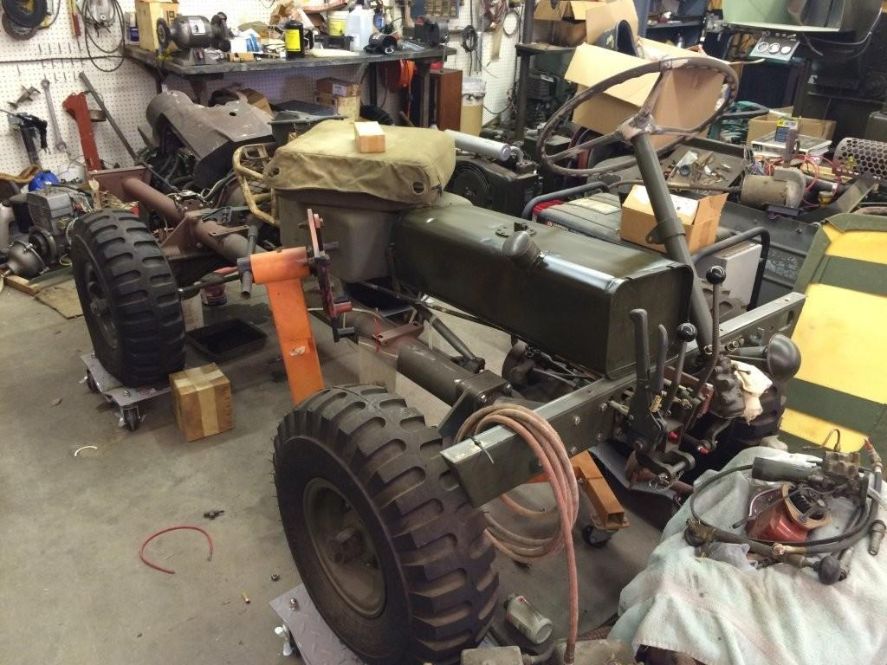 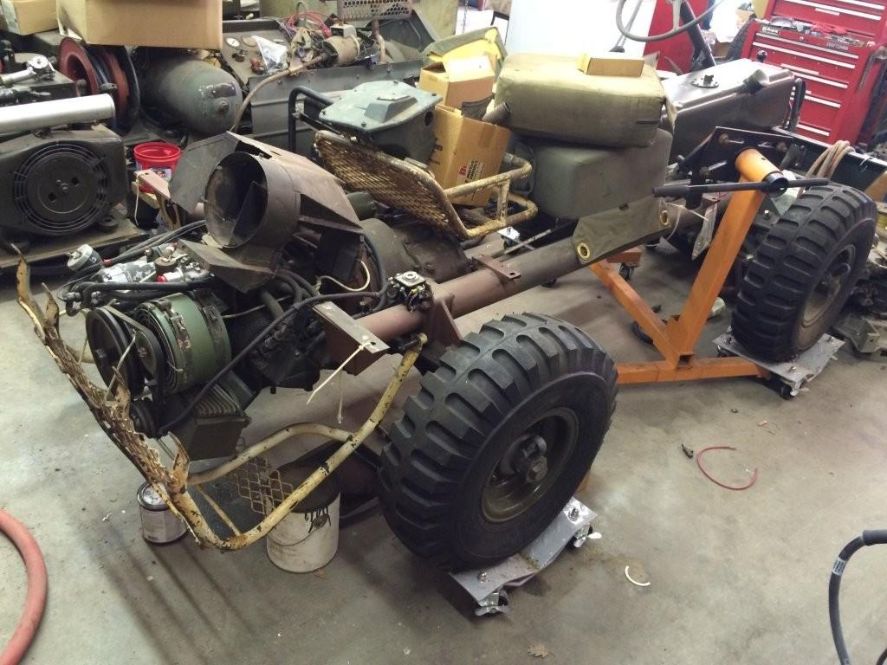 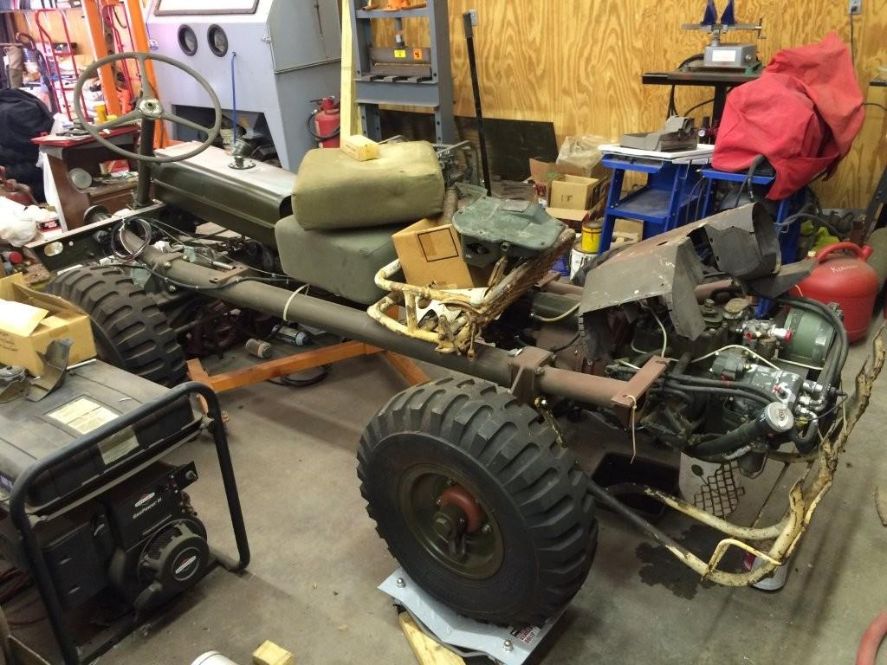 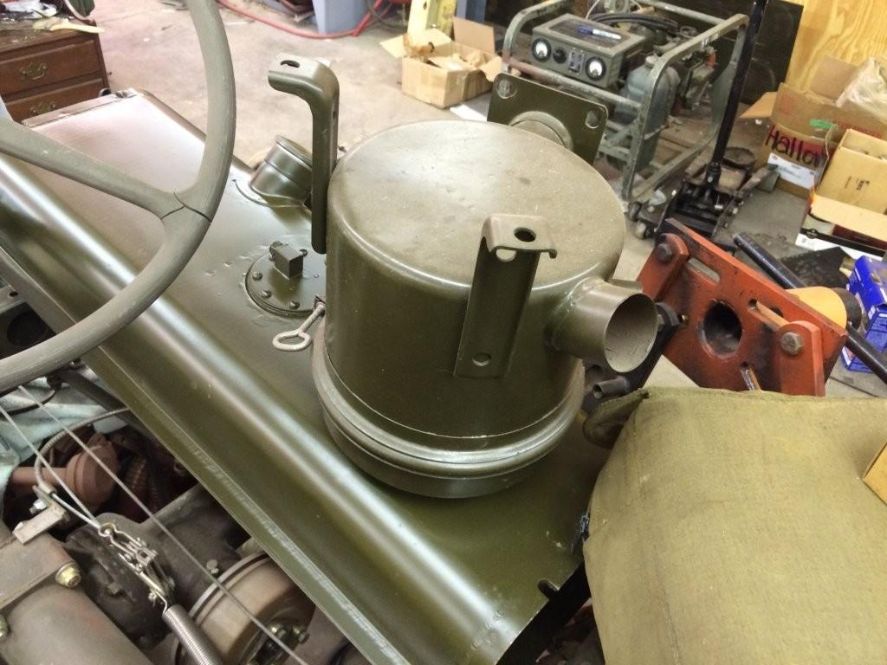 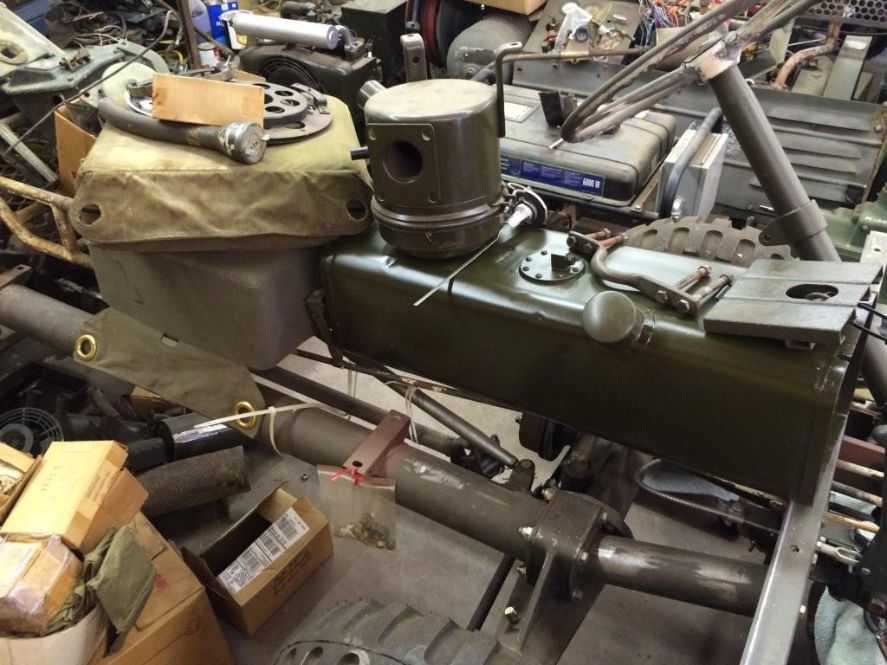 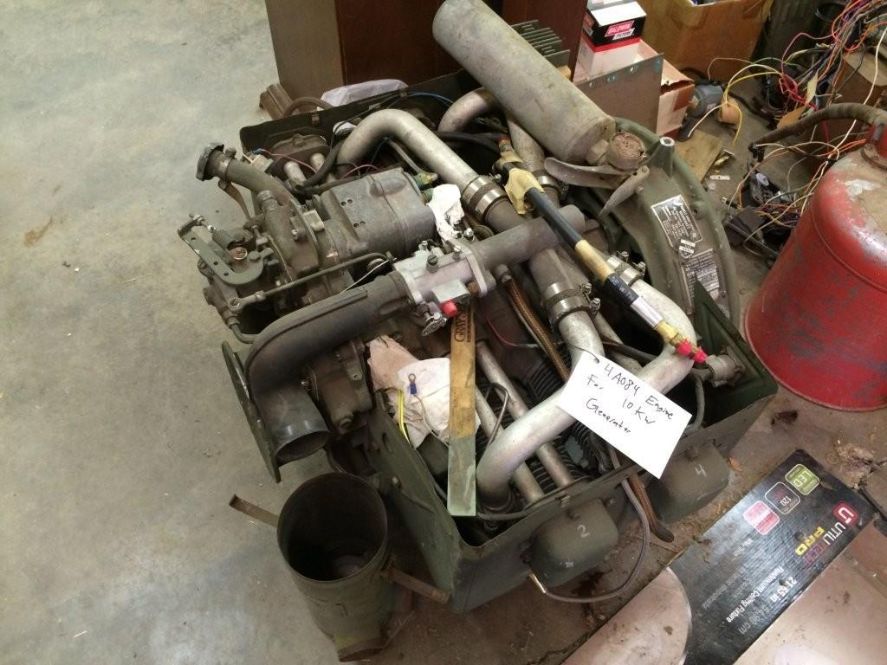 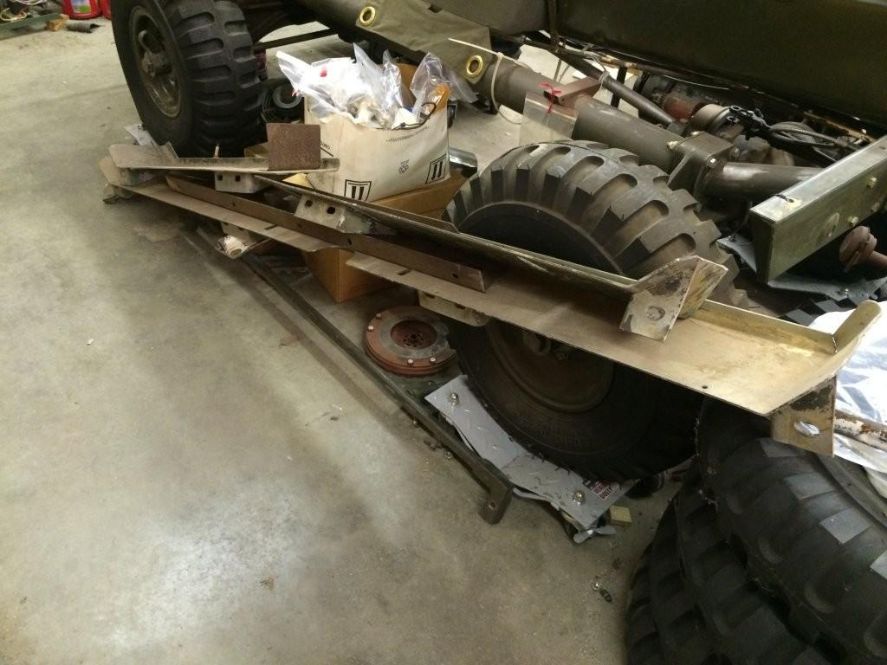 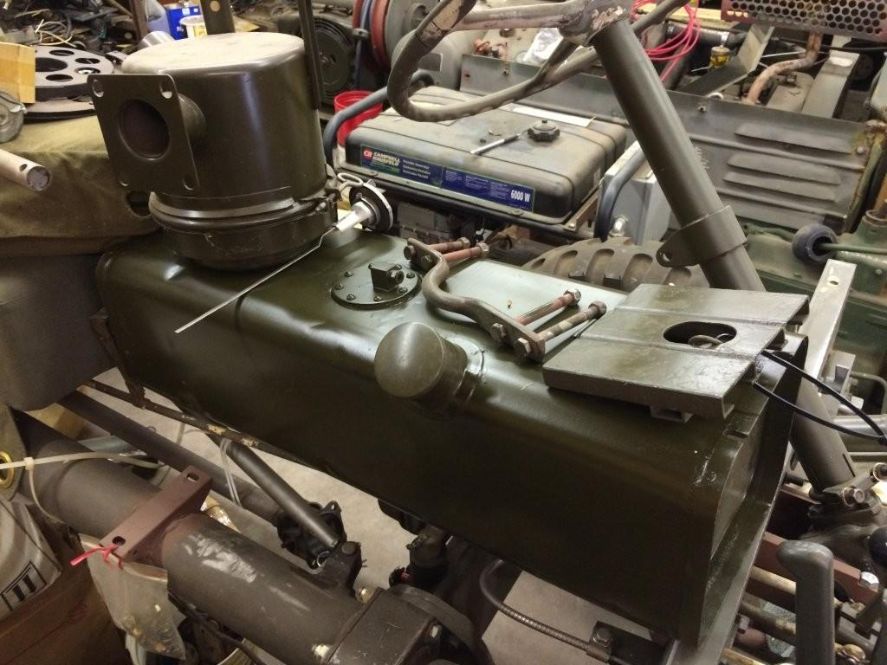 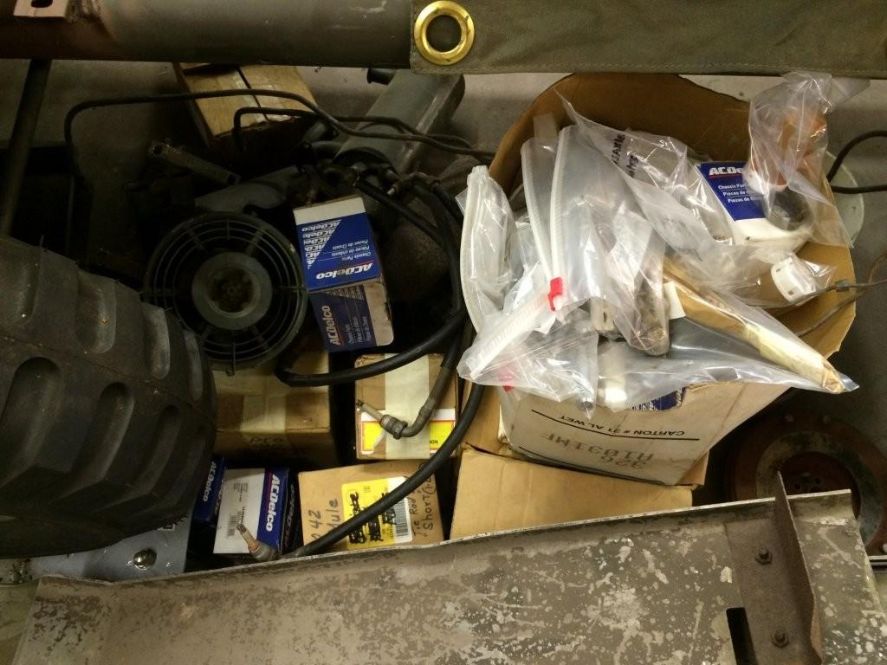 Last bunch of photos . . . thanks for looking. Maybe someone can see something that the image can be saved and help someone else ID a part or assembly. The seller seems to value the new tires, fenders and spare engine that go with this team of mules. And, I don't have to worry about sandblasting magnesium. Unless directed otherwise by these photos, I'm thinking it's more of a 5k or less deal. 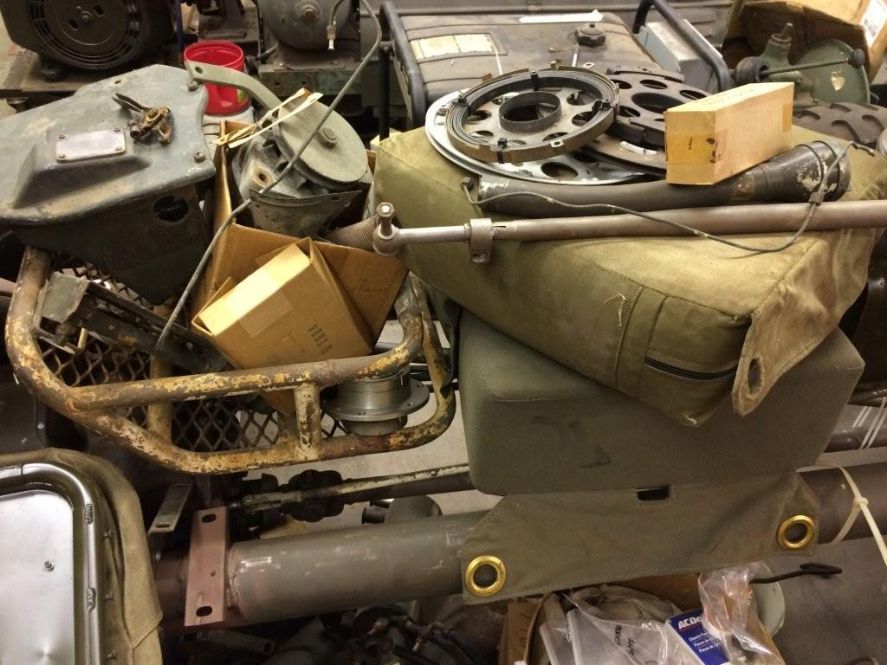 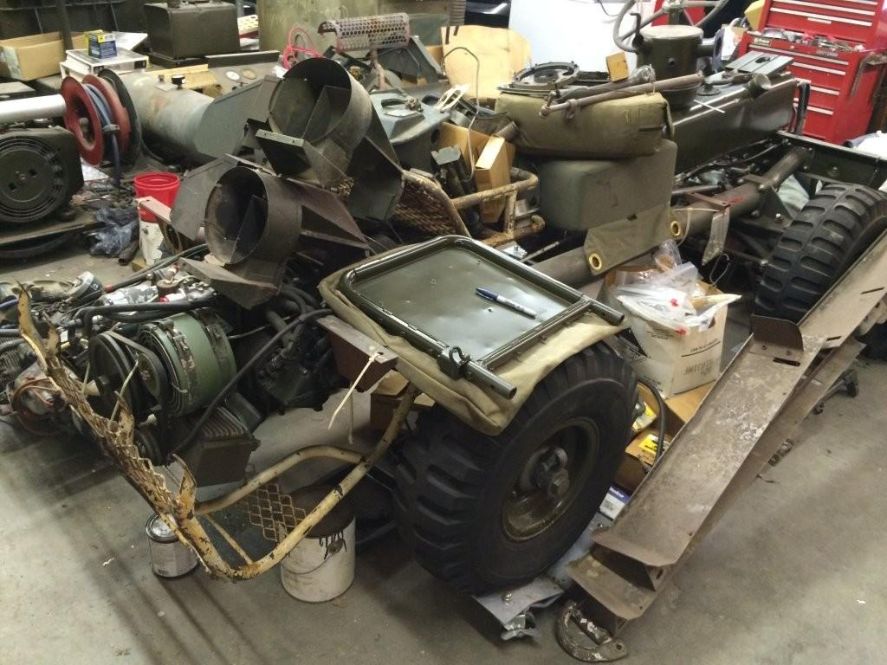 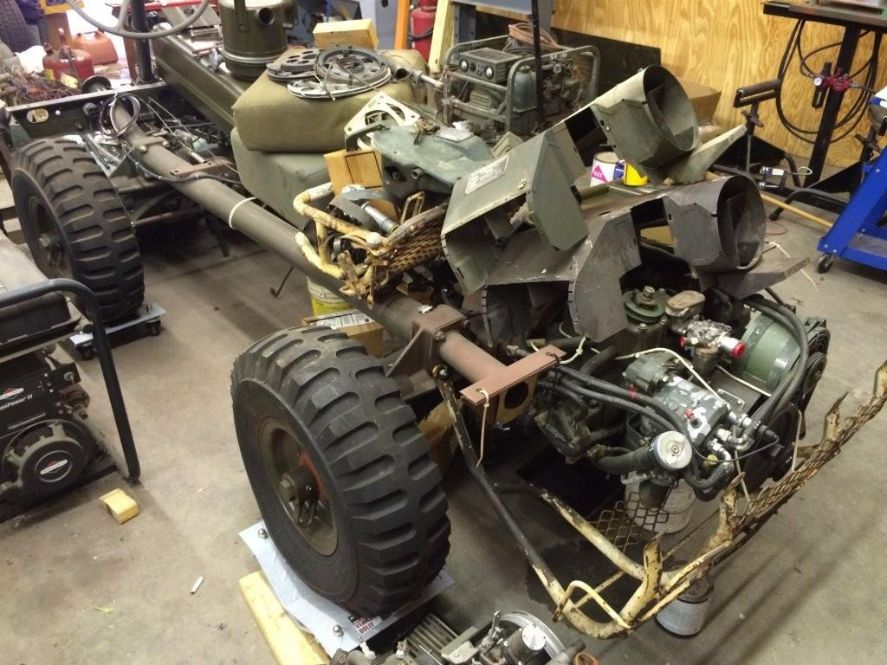 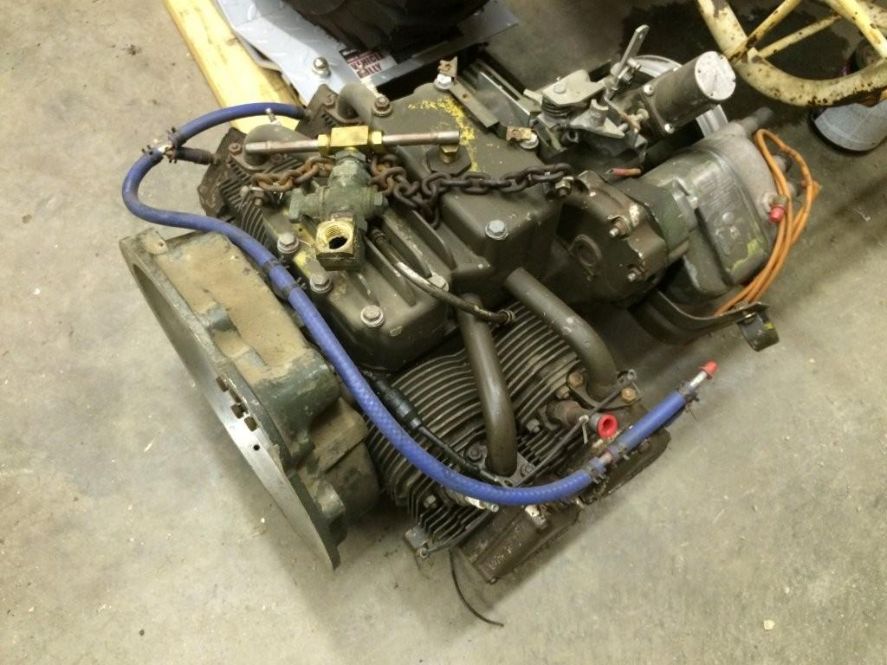 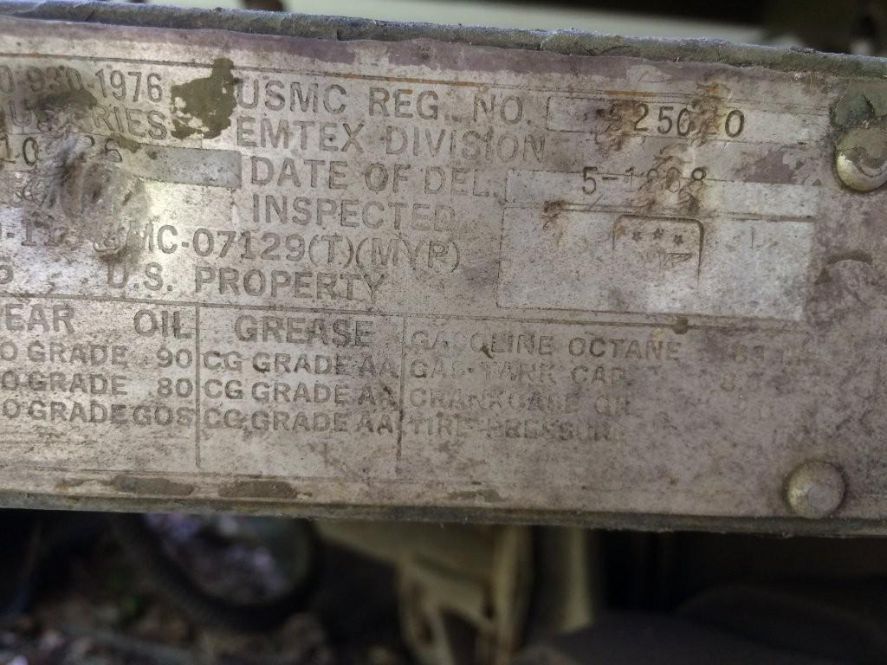 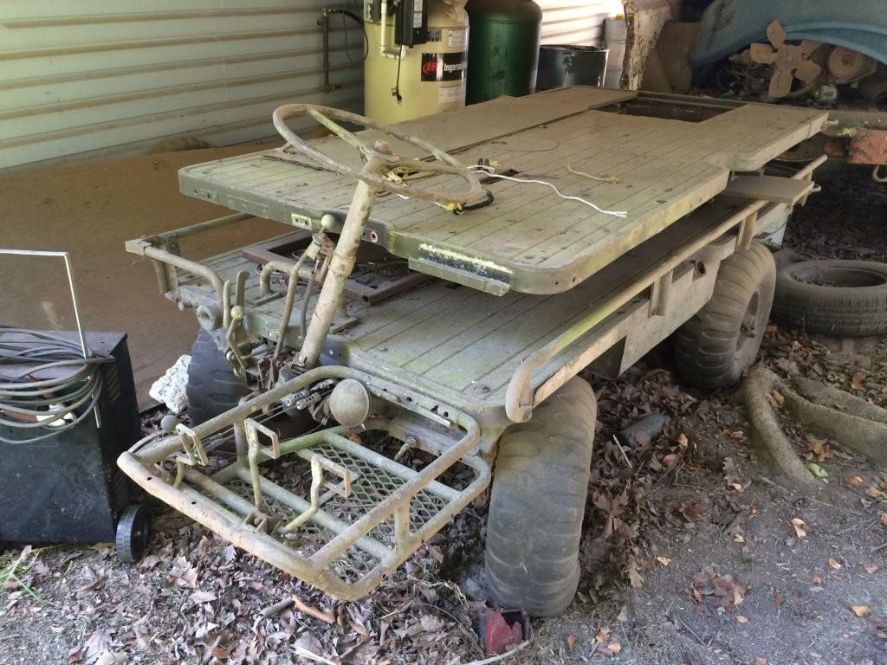 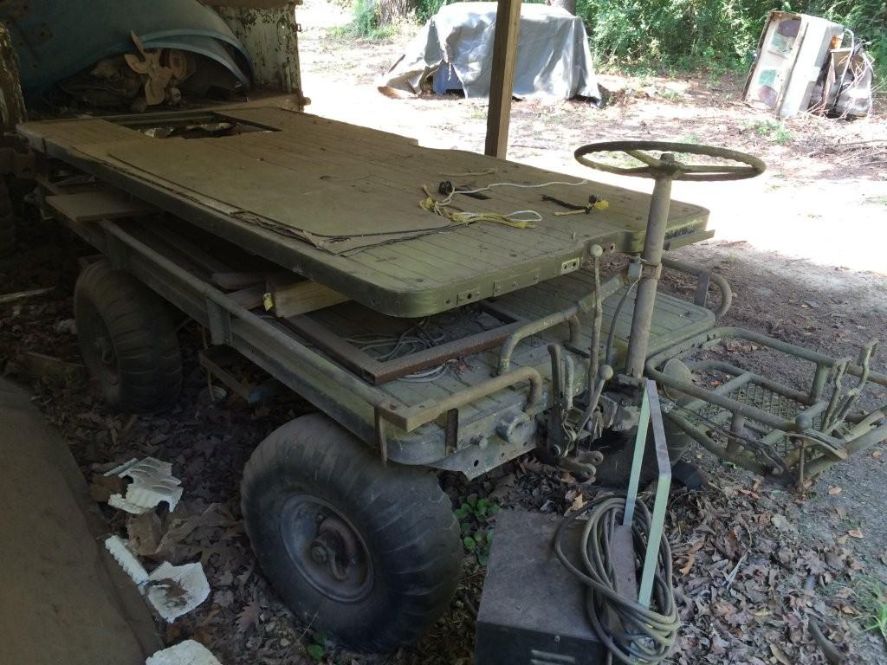 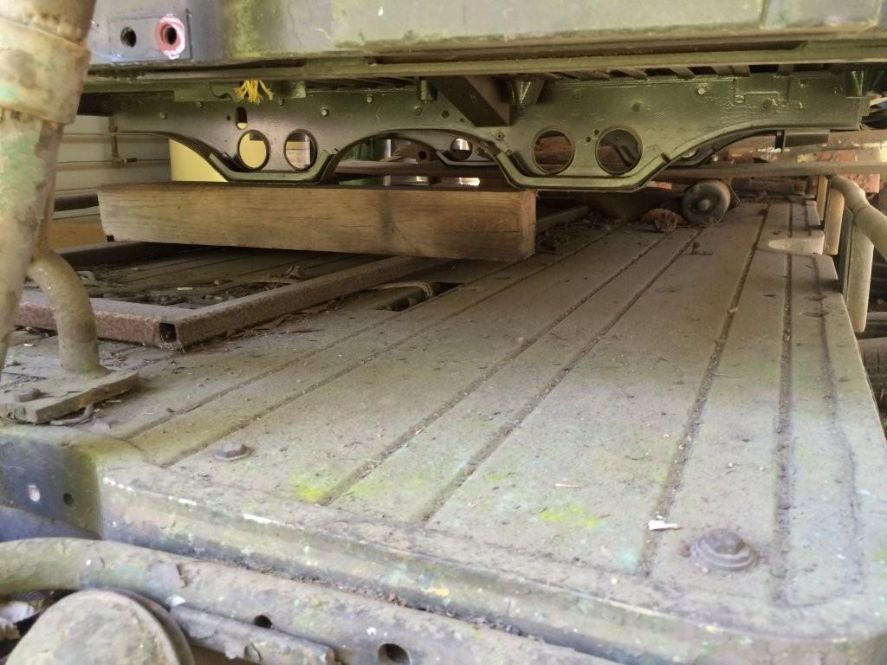 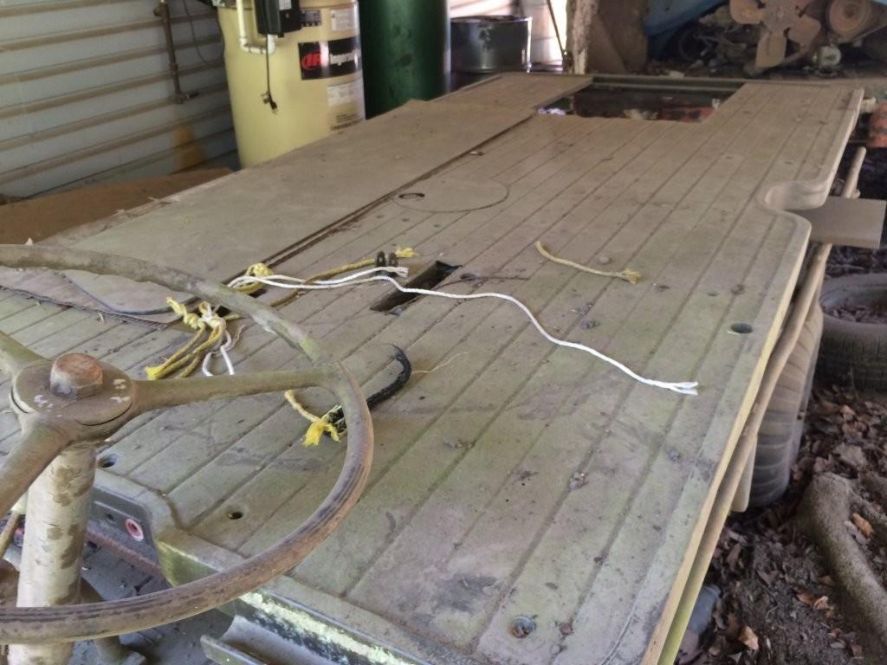 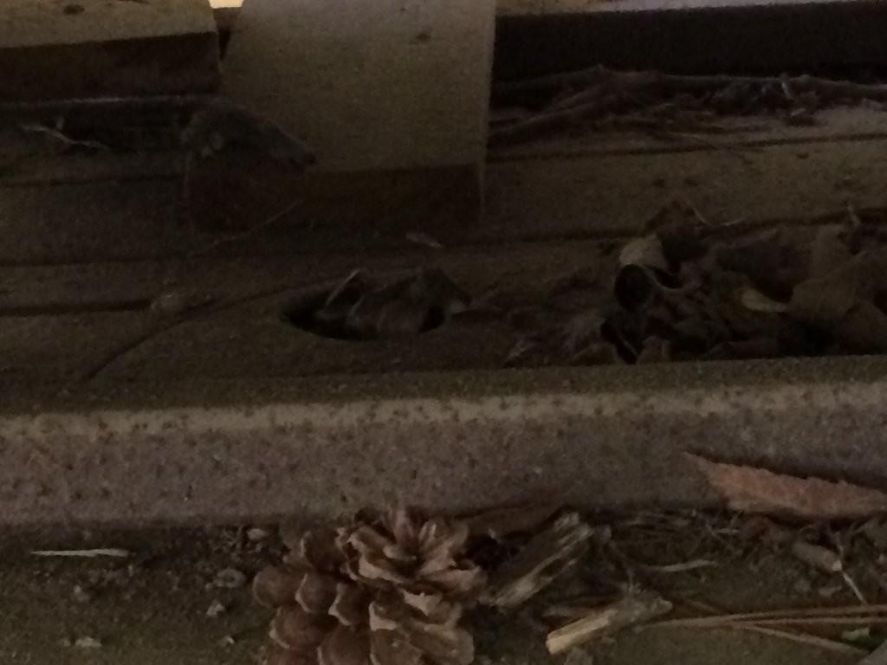 Remember what I said about the last of the pictures? 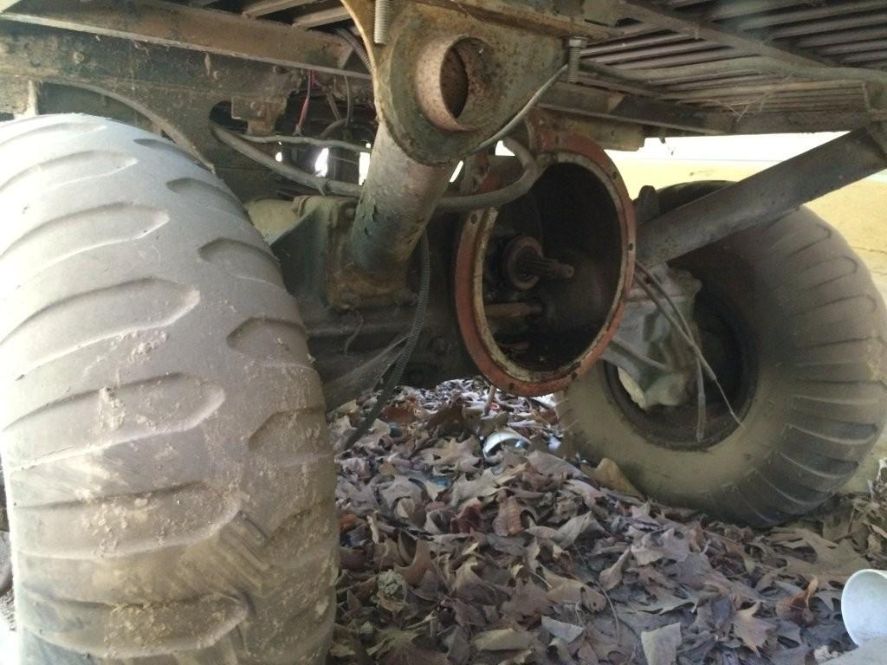 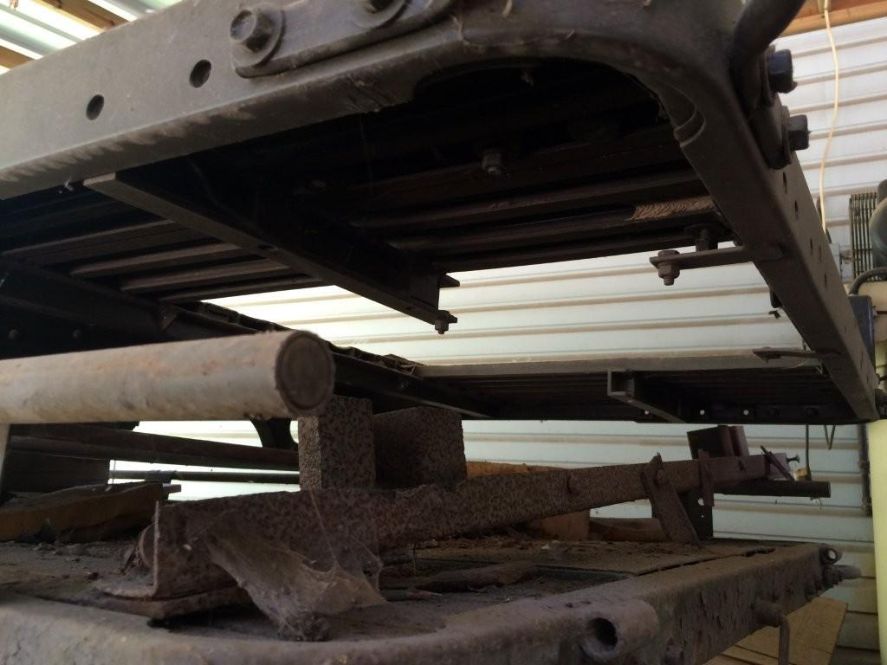 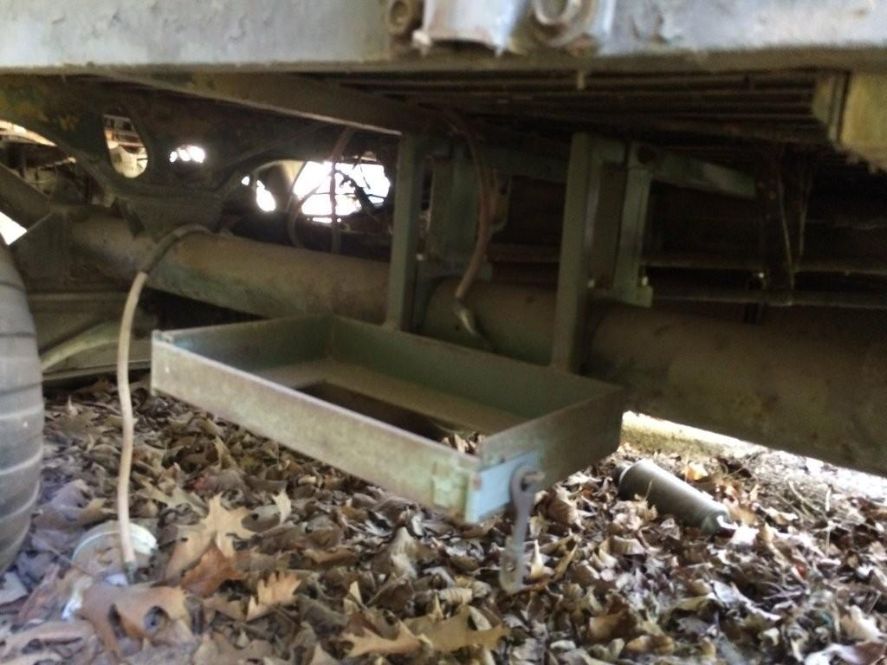 Well, to start with, those new tires that you valued at $1000....they are the wrong ones.
To me, the A5 would be the more desirable of the two, but I don't see the air cleaner, muffler or engine guard for it, all very hard/impossible to find. No telling what else is or is not there. Edit: I also don't see the A5 engine deck cover.
Everyone should have to work on a 4-cylinder once in their life! As Bill Watson told me one time, "You'll be sorrrrieee!"
Last edited by Chuck W. on Wed Nov 14, 2018 4:56 pm, edited 2 times in total.
North Alabama
Dixie Division Military Vehicles Club
former MVPA member
Top

FYI, the A5 is an early Baifield, serial number 10826, registration number 325020, built in May, 1968 by the EMTEX Division. If you buy these mules, I would love to see the dataplate on the M274 as it is an early first-series machine and I don't have a lot of information on them in my database.
EDIT: At least it appears to be a first series deck with only one set of seat back holes and the long top foot basket bracket. There are a lot of first and second series 4-cylinder pieces mixed up in the pile.
Last edited by Chuck W. on Thu Nov 15, 2018 8:21 pm, edited 1 time in total.
North Alabama
Dixie Division Military Vehicles Club
former MVPA member
Top

I see mule and non-mule projects kind of mixed in a cluttered work space. You would need to take an experienced mule person with you to sort it all out to see exactly what is or is not there. Everybody here can tell you what a pricey little beast they can be.
Top

If you want a mule, I'd suggest you find a running, complete one. I am partial to A2's, but they are getting hard to find with a decent deck. 2nd model A5 with added 4WS would be my second choice.
You will spend $6-10K on a running, complete mule, but believe me, you will spend that much trying to run down all the missing parts on a cheap mule.
.....Although, sometimes you get lucky!
North Alabama
Dixie Division Military Vehicles Club
former MVPA member
Top

Lance-W
Sergeant Major of the Gee

That's quite a pile of parts

Good luck either way you go. Just sorting out what you have will be quite the chore. You'll be very Mule smart when you're done though

If you end up pulling the trigger and selling some parts Id be interested in the A2 AWS deck cover and some of the seat parts...
Thanks
Remember the word "expert".....An "EX" is a has been.... and a "SPERT" is a little drip...
Top

Did you ever make a deal on this stuff? I hate it when we never have any follow-up!
North Alabama
Dixie Division Military Vehicles Club
former MVPA member
Top
Post Reply
13 posts • Page 1 of 1