Well, yes this is a long shot but would rather this instrument go to people who can appreciate them rather than putting them on an auction site. Looks like this "G" category is probably the best one to put it on.

I am a woodwind player and have for sale a USQMC (United States Quarter Master Corp) tenor sax. Plays well and is silver in finish. Located in Dayton, OH and asking $500.

Also have military clarinets, oboe, flute, alto sax and even a bassoon!

Contact me if you have interest in the sax and I will send you pictures.

The sax is in very good shape and has most of its' silver plating with little plate ware. It comes complete with mouthpiece, neck and USQMC case. It has a gold wash bell and the stencil of USQMC is clear as is the rest of the engraving. The tenor was made by Wurlitzer whose job was to make stencil saxophones for Buescher, Conn and Martin. If you look at the serial number of this tenor, Buescher labels it from 1917 to 1918 and Conn also says it was made at that time too.

During shortages of metal, for both World Wars, the manufacturers made very few instruments for the American public and the woodwinds made were almost exclusively for the Army and Navy. Thus, you will see woodwinds of WWl and WWll years marked with USQMC, US Army, or US Navy.

Here's a few photos of the tenor. I also have two military alto saxophones, a wooden and a metal military clarinet and a US Army flute which I may try to sell all of them here on the "G". 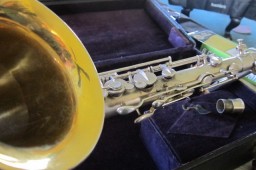 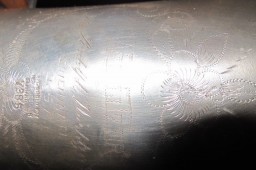 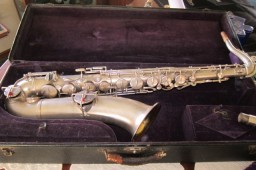 The tenor sax has been sold.

Also sold was a military trombone, a USQMC metal clarinet, a Navy clarinet, and a USQMC flute.